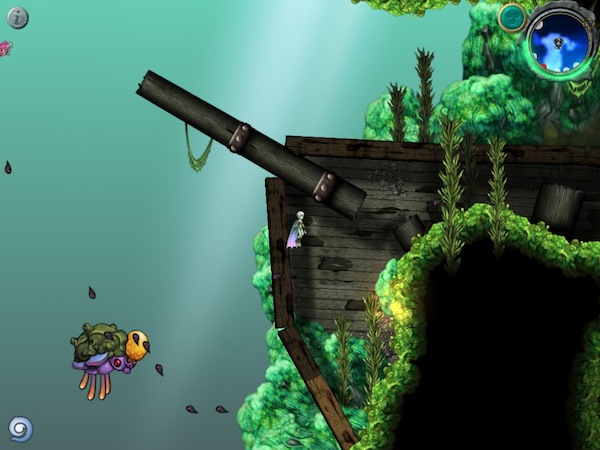 When I was 6, my parents bought me a Super Nintendo. I didn’t know much about video games back then, but I knew that after Nintendo’s Game Boy I wanted the SNES. Sure enough, I got a European SNES for my birthday with some games to go with it, including Stunt Race FX and Super Metroid. Stunt Race FX eventually got reconsidered as a “gem” from the SNES era years later, but I remember I didn’t like it much back then. I did love Super Metroid, and even if the challenge was a little too hard for a six year old kid, I got away convinced that games like Super Metroid were the ones I liked. In the years that followed, I played Super Metroid on an emulator (somehow, I lost my original SNES cables) with a much better understanding of its plot, and all the Metroids that were released on the Game Boy Advance (Fusion and Zero) Game Cube and Wii (the Prime series). I even went through that pain that was Metroid Prime Hunters for the original DS. I loved Metroid.

At the same time, I tried to explore other offerings from the genre that Metroid and Castlevania nurtured. That meant going through Symphony Of The Night on the PSX, and other less inspired titles for Nintendo’s GBA. But I loved the so-called “Metroidvania” games – characterized by large maps with areas that you have to explore and unlock through upgrades to your main character, 2D side-scrolling, crazy hard boss fights and generally decent plots – so I kept playing.

As I grew up and got a job, I found to have less time for gaming. I bought a Nintendo Wii and Xbox 360 but never really got to fully enjoy them. In fact, I’ve only recently started to get back into portable gaming thanks to iOS devices and a Nintendo 3DS, which I acquired last week (but more on this in another story). So it was with a mix of curiosity, excitement and, after years of non-playing, apprehension that I approached Aquaria for iPad, a porting of a popular, award-winning PC game. Would a Metroidvania game for iOS still hold up to my old expectations and renewed interest for multi-touch based adventures and puzzles?

Aquaria is set in the underwater world of, well, Aquaria, and you control this creature called Naija that, suddenly, starts having visions and wants to find out more about her past, her origins, and the destiny she’s up against. Fairly regular stuff. Aquaria may not have the space-based political implications of a Metroid Prime or the medieval roots and stories of the Belmont family, but it’s good enough to keep your interest alive as you discover new areas and learn new pieces of information about the history of Aquaria. Voiceover and cut scenes won’t win an Oscar but they’re more than decent and, overall, Aquaria’s and Naija’s mysterious backgrounds contribute to making exploration and backtracking (there’s lots of it) more enjoyable. Plot and character-wise, Aquaria feels like a “real” game for iOS, not some shoddy Angry Birds clone. This is console-quality production and it shows when you look at the whole package.

Said production truly shines when you take in account exploration, graphics and soundtrack, controls and Naija’s own evolution throughout the game. First, the graphics. Whereas 2D Metroids and Castlevanias would have you get used to claustrophobic places with rooms, corridors, platforms and the usual side-scrolling suspects, Aquaria is more about large underwater spaces with some narrow corridors and caves and “closed” rooms here and there. Sure, you’ll find narrow passages and uncomfortable entries in Aquaria as well (otherwise, the game wouldn’t hold up to its tradition), but you’ll see how the focus is more on larger, beautifully designed open spaces rather than a series of platforms and rooms one after the other. Not that Aquaria’s setting would allow for classic platforming, as you’re swimming underwater and there really isn’t room for jumping and carefully considering your next step. Most of the time you’re spending in Aquaria you’re doing so by quickly moving forward (double tap anywhere on screen) or simply floating around with your finger selecting where Naija should go. And these underwater locations – well, they are beautiful. 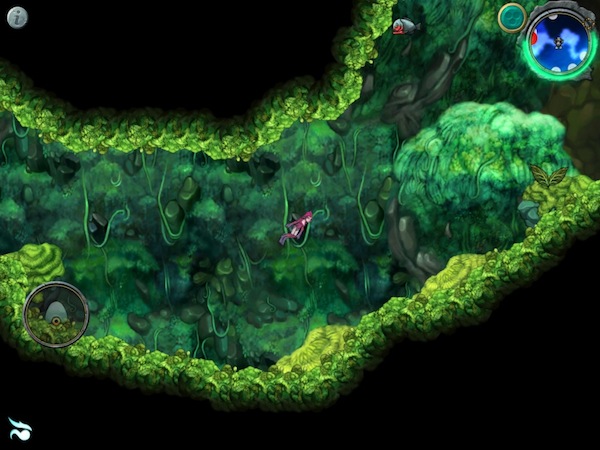 Aquaria sports an impressive artistic direction, one that brings old SNES memories back but at the same time epitomizes our modern devices’ capability of drawing and animating fluid, smooth pixel characters and constructions. The game’s colors are vibrant and purposefully handpicked to make enemies and surroundings feel “alive” and breathing as you swim your way through Aquaria – it looks fantastic on the iPad’s display, and it shows great taste from the developers. The character and level design are equally top notch, with some areas and enemies casually resembling each other sometimes but, overall, a distinctive feeling that won’t make you forget Aquaria’s world any time soon.

The original soundtrack is a success as well, and even if sound effects aren’t as tied to environmental changes and enemy presence as in, say, Metroid, Aquaria still manages to have some of the best music for adventure games available on iOS.

The controls left me a bit more disappointed, mainly because I initially thought I’d be able to play the game with my thumbs at both sides of the iPad’s screen. However, Aquaria doesn’t come with nowadays’ typical virtual analog stick for character movement, which means you’ll have to tap – as I mentioned above – to control your swimming and floating in Aquaria’s underwaters. Instead, Aquaria places two different buttons at the bottom of the screen: without having many spoilers around, one is to “change form” and the other is to sing. In the game, in fact, Naija will gain a series of upgrades and new musical abilities that will allow her to beat enemies, move rocks and obstacles, activate cut-scenes and generally unlock stuff that you could see (but couldn’t get) in previous areas – example: once you get the ability to move rocks, you can go back to the first area you explored and move that thing that blocked access to a new object. Which, by the way, is likely a variety of new food as part of the game’s cooking system (think potions with fancy sea names). In this regard, Aquaria is very similar to 2D Metroids in that you’ll have to backtrack towards old areas to unlock items that are only available thanks to Naija’s latest upgrades. This is generally a good thing if you like the genre, and Bit-Blot has eased the pain of backtracking with map markers (annotations) and sea creatures to quickly travel from one location to another.

So, basically, in Aquaria there’s lots of 2D fighting and exploration, backtracking, puzzle-solving to unlock new areas and upgrading of your main character as you learn new songs, get new forms, and new recipes. Coming from a Metroid and Castlevania background but after years of “gaming exile”, I instantly felt familiar with Aquaria’s game mechanics and way of putting things in front of me. I may not have been played a lot in the past years, but I can spot a hidden cave or room to “save for later” when I see one.

Aquaria guarantees hours of quality gameplay and several more if you’re willing to discover every secret and unlock all the possible items and recipes. Most of all, Aquaria holds up to its Metroidvania roots whilst spicing it all up with different controls, a beautiful underwater setting, and a solid map system. Highly recommended.