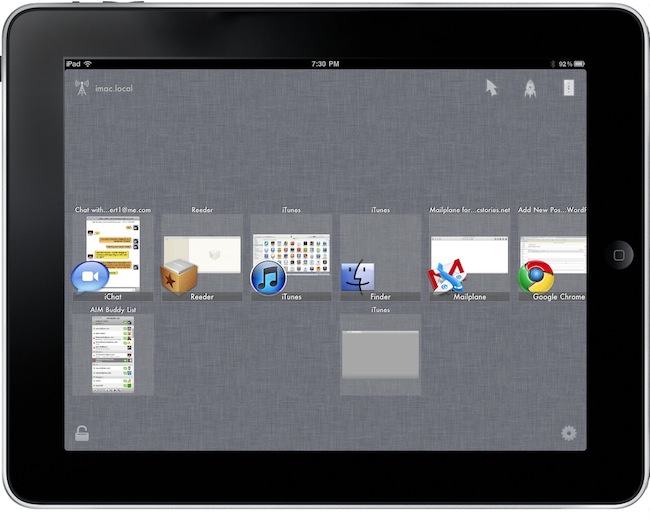 If you’re that kind of user who has set up a home entertainment system based on a machine running OS X, then probably you’re always looking for the next big thing in remote control. Several users, instead of buying a dedicated set-top box like an Apple TV or a Roku Player, prefer to get a relatively entry-level machine like a Mac Mini and route all their music, movies and photos through it. Because entertainment aside, the thing also happens to be a computer that can backup itself on a daily basis and serve content to other computers or iOS devices in the house. Just think of all the iTunes libraries or Plex installations shared through Mac Minis or, at best, Mac Pros that are powerful enough to be both desktop machines and entertainment systems for when the work is done and all you need is a good movie. A Mac computer set for such tasks, however, needs a good remote control system because, frankly, you just can’t use a mouse and keyboard on your couch.

Sure, you could use an Apple Remote and get most of your things done without having to lift a finger, but what about all those times when you want to use the stuff a computer also comes with – you know, like a web browser and high-def Youtube videos scaled to take all your TV screen? After all, even if geared towards home entertainment purposes, it’s a computer. And it needs to be remotely controlled. You could buy a VNC app like Screens for your iPhone and iPad, and control the computer that’s running on the TV in front of you with the comfort of also having it in your hands, in a portable app. Perhaps, though, you don’t need to have its screen mirrored on an iOS device and you just want a remote app that acts like a touchpad and lets you quickly launch and quit apps, and check on running ones.

Remote Conductor, a new iPad app by m3me, aims at reinventing the “remote controlling” app genre by combining in a single package features like a touchpad, multi-touch gestures support and some sort of application launcher and OS X-like Exposè to let you easily and effortlessly control your Mac’s screen from anywhere in your room using an iPad. 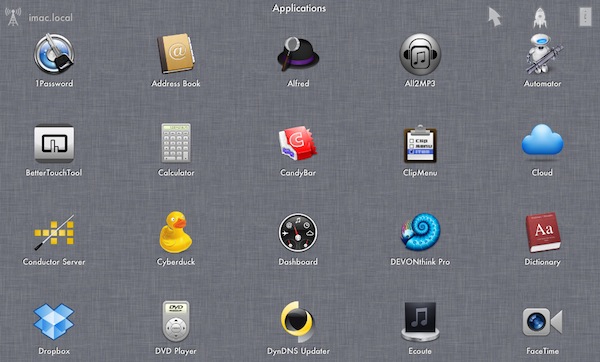 The app is made of 3 different screens: a touchpad, an app launcher / dock interface and a window that shows a preview of all the open apps on your Mac, together with their names and icons. On first launch, you’ll be asked to download a server app to install on your Mac that will enable your computer to communicate with the iPad client; pair the apps with an alphanumeric code, and you’re good to go.

By default, Remote Conductor launches in touchpad view, which is nothing but a huge grey surface you can use to remotely move the mouse cursor on your Mac. The app comes with a bunch of settings to adjust a network’s update rate and mouse tracking speed, and in my personal tests I found the “fast” network update rate to be pretty reliable, even if the cursor “hangs” sometimes. I have to admit that, even if powered by an AirPort Extreme, my home network isn’t that great. So, I believe the highest quality settings will work just fine for most people with decent networks and fewer devices running at once. In the settings, there are also options to set three and four-finger multitouch gestures – a welcome feature that allowed me to set three-finger dragging and four-finger swipe left to show the Desktop Switcher on my iMac while using Remote Conductor. You can check on all the available gestures supported by the app, too, and you’ll see that most O SX standard commands have been implemented. Five-finger swipes, for instance, are supported.

While the touchpad does just what it needs to, I wish Remote Conductor offered a way to trigger system-wide actions like “play & pause” or “forward” the way Rowmote Pro does. Remote Conductor’s touchpad is just a surface to move your mouse on screen, but no contextual, smart buttons are included. Remote Conductor, however, provides a neat way to launch any app on your Mac by scanning specific folders (by default, /Applications and /Applications/Utilities but you can add more in the app’s prefs on your Mac) and displaying all your apps in a secondary page that also has an exact replica of your Mac’s dock in it. You can swipe between pages of apps found on your Mac, or quickly select one in the dock. Once you do, the app will jump back to the touchpad view to let you control it.

Like I said, Remote Conductor also lets you see all your open windows at once and tap on them to bring them to the front and start using them with the touchpad view. The cool thing is, window thumbnails and icon previews aside, the app will stack related windows on top of each other so you don’t have to flick through dozens of apps on your iPad’s screen.

Remote Conductor is a good app, but I wish it had more system-wide functionalities and shortcuts that didn’t force me to do everything with the touchpad. The option to navigate through all your apps and open windows is useful, although I’d like to see some extra functionality in there, like buttons to quickly close, minimize and quit without having to move the cursor. As it stands right now, Remote Conductor is a good first attempt at building an all-in-one remote controller for OS X which, hopefully, is going to get a lot better within a few updates. Available at $9.99 in the App Store.