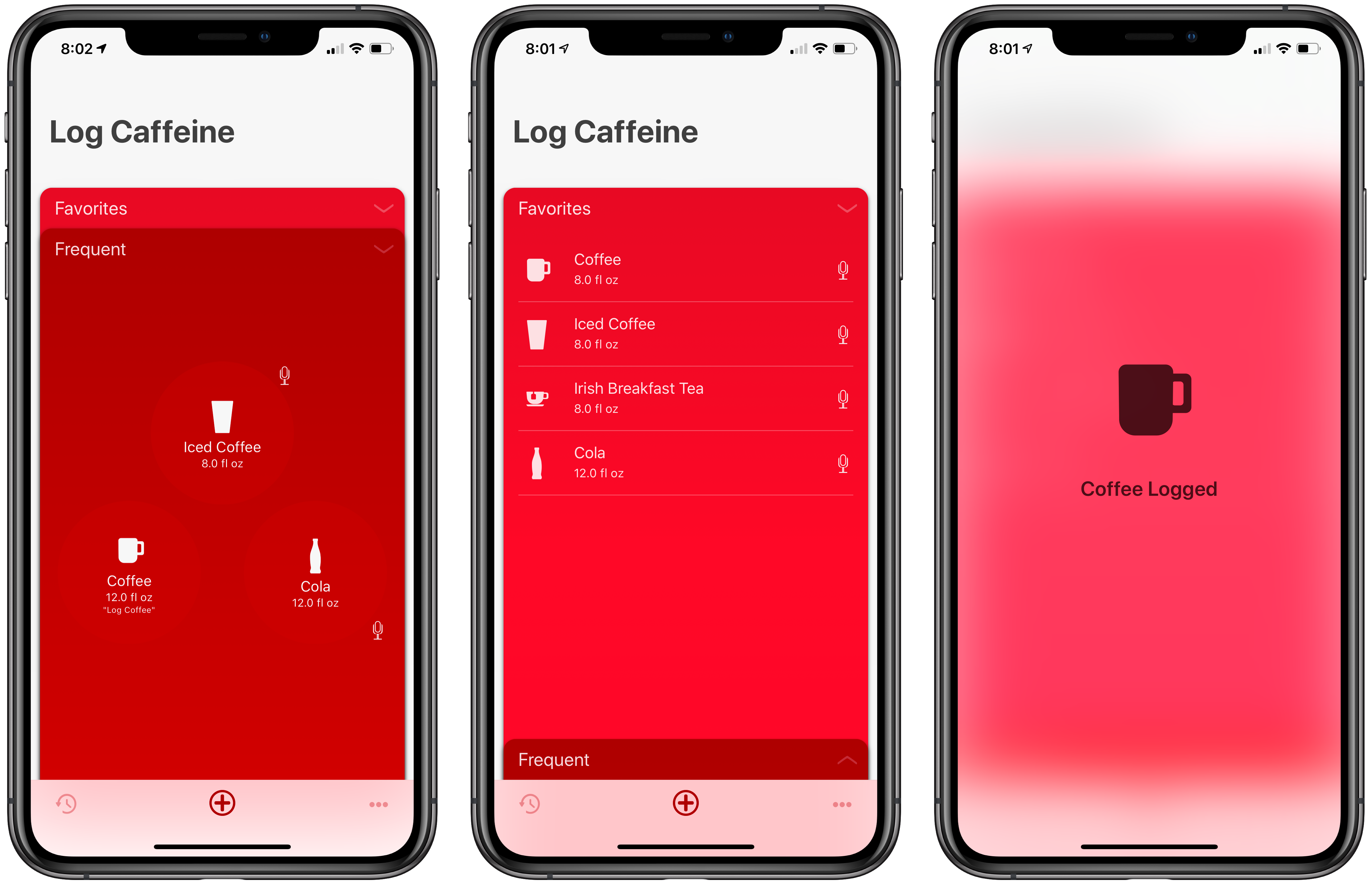 RECaf is a brand-new caffeine-tracking app by Joe Cieplinski. The app does a remarkable job wringing the friction out of tracking caffeine, making it an excellent example of the benefits of using a narrowly-focused utility to get the best possible user experience.

Tracking anything is hard. It’s easy to forget to do and an interruption of the thing you’re trying to track. As a result, entering data is often sporadic or abandoned entirely. Cieplinski gets this and has built an app that is unusually sticky.

RECaf succeeds through a couple of different approaches. The most important is that there are so many different ways to log data that no matter how you use your iOS device or the context in which you find yourself, there’s a way to record your caffeine easily.

The main app follows the modern Apple design aesthetic used in Maps and other apps that utilize bold typography and a card interface. Touch targets are big, and you can navigate between tabs by swiping anywhere in the UI. It’s a forgiving interface that makes one-handed iPhone entry easy.

RECaf opens to the center tab dedicated to logging caffeine, which has two cards. The first displays your most frequently logged items, which means you’re always just one tap away from entering any of them. The second card is dedicated to favorites, which can be assigned from the app’s ‘More’ tab.

If what you want to log isn’t available on the frequent or favorite cards, tapping the plus button in the tab bar opens a view that displays eight source categories. Tap one, and you’ll find buttons for pre-built items.

If an item you want to log isn’t available in RECaf’s database, you can add it yourself from the More tab. There you’ll find RECaf’s source list where you can mark items as favorites, edit existing sources, and add your own.

The History tab provides a collection of stats about your caffeine consumption including today’s intake, the past seven and thirty days’ average consumption, and the number of times you’ve consumed caffeine ‘after hours,’ which is any consumption past 3:00 PM. There are also breakdowns of the time elapsed since your last caffeine, an analysis of the time of day you consume caffeine, your top and most recent source, and your first logged caffeine routine. The stats are displayed on mini cards that can be reordered by long pressing and dragging them. The History view also includes a detailed chronological list of logged items that can be tapped for more details and editing.

As simple as the main app is to use, it isn’t always the easiest way to enter data. If you’re in the middle of something else on your iPhone or iPad, RECaf’s Today widget is a good choice. It’s got a summary of the current day’s caffeine intake and buttons to log your most frequent items.

RECaf also learns how you consume caffeine and when. If you don’t log an expected item, RECaf sends you an interactive notification you can use to quickly add something you might have forgotten. 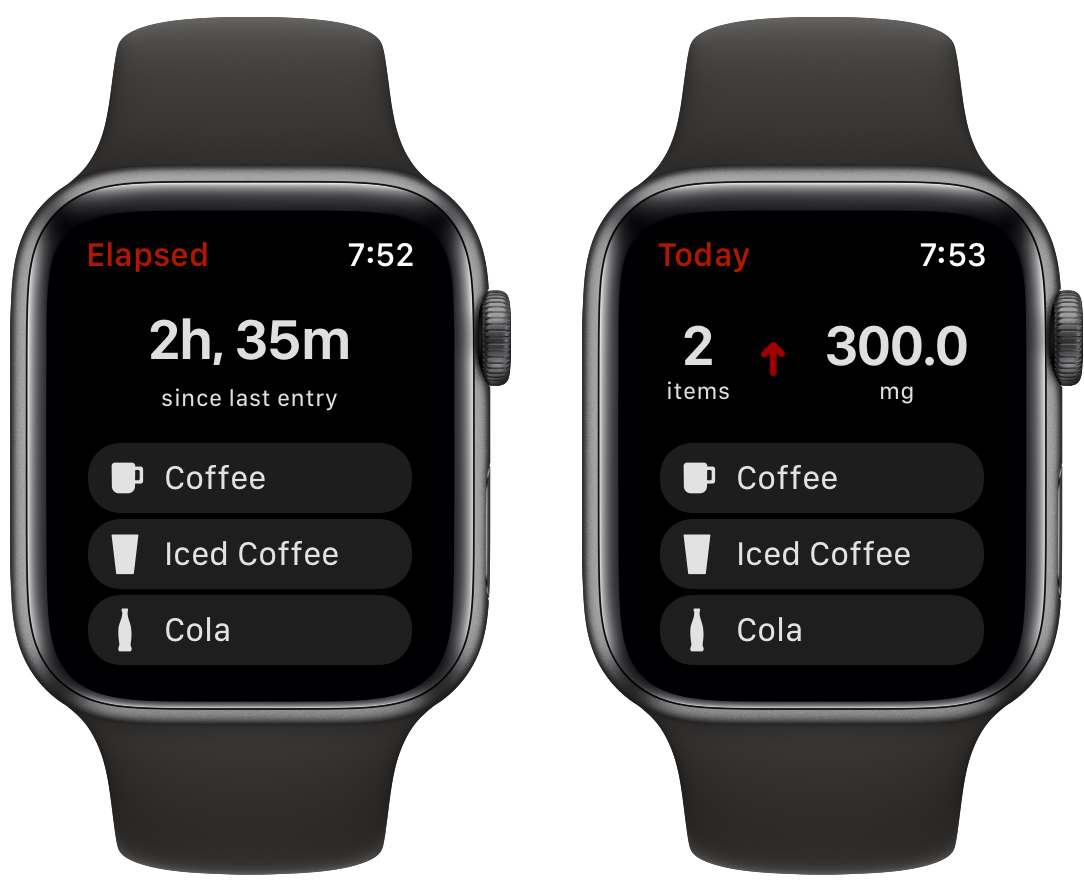 There’s an Apple Watch app too that displays a summary of the current day’s intake and whether you’re trending above or below average. Turning the Digital Crown reveals the time elapsed since your last caffeine. There are also buttons to record your most frequent items. Watch faces can be customized to include RECaf’s small complication that launches the app and tells you if your intake is trending up or down or a large complication with a summary of today’s data and whether you are above or below your average. 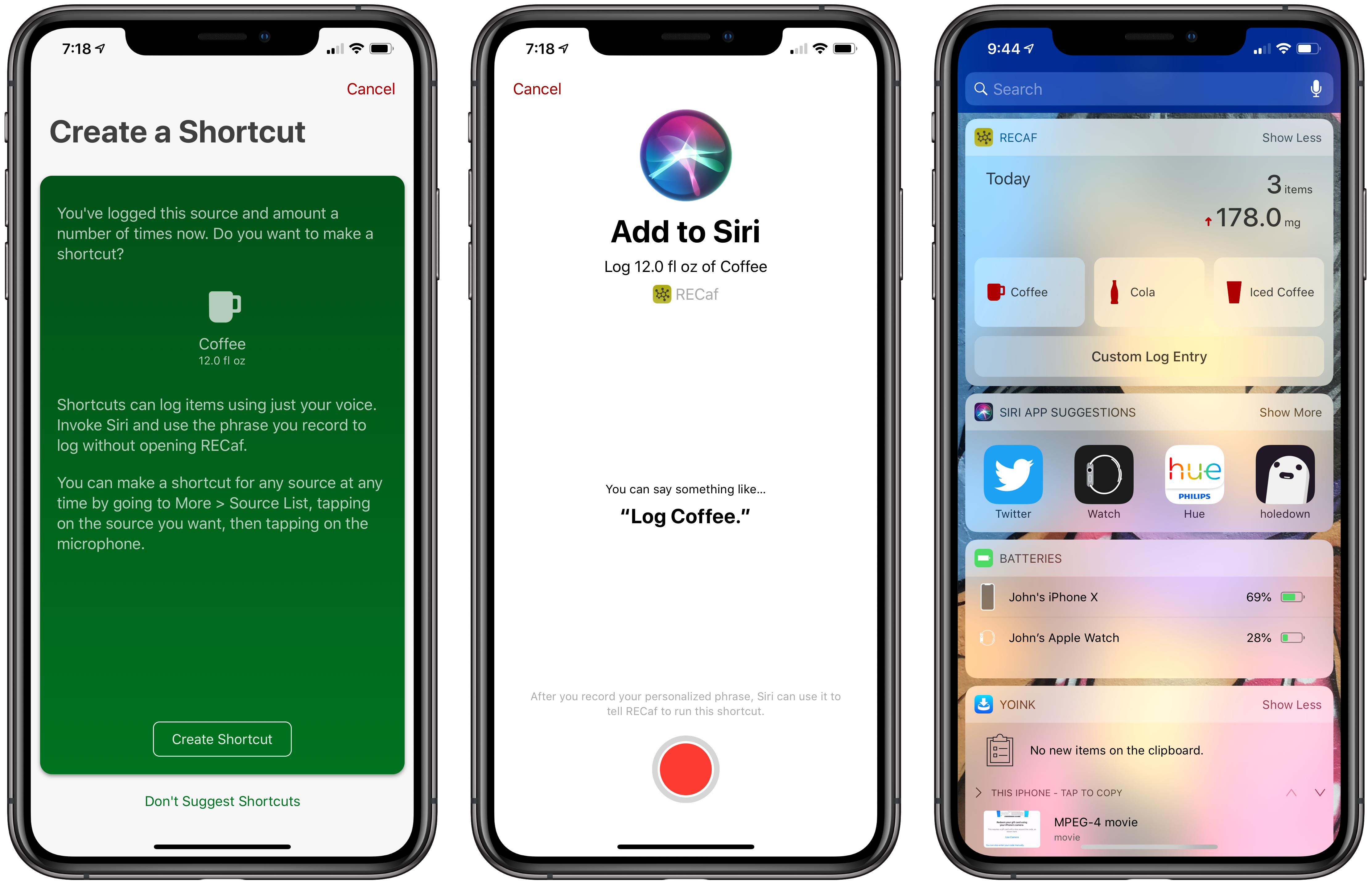 Beyond the convenience of asking Siri to log my morning coffee from my HomePod as I make it in the morning, I like that I can build more complex custom shortcuts with RECaf’s shortcuts as actions. For example, you could track two cups of coffee and whether you ate a healthy breakfast with a multi-step shortcut that combines Siri shortcuts from RECaf and Streaks.

That’s a lot packed into an app that only tracks caffeine, but it’s the breadth of ways to get data into RECaf and the attention to detail that makes the app so useful. Unless you are entering something you’ve never had before or that isn’t included in RECaf’s database, you’re never more than a couple of taps or a Siri command away from logging your caffeine intake.

I’d like to see RECaf’s History section expanded in the future to include graphs of caffeine consumption over time. RECaf syncs with the Health app, so you can view charts there, but I’d like to see more detailed breakdowns of my data over an extended period inside RECaf itself.

By the end of a busy September, I found myself consuming an extra cup of coffee or two more often than I’d like. That caffeine-creep was confirmed as I’ve taken a look at the data I’ve collected in RECaf. The best part is that since I started using RECaf, I’ve rarely found myself forgetting to log my caffeine intake, and I don’t feel like the app is a speed bump on my way to that first cup of coffee in the morning, both of which have made it more effective than other caffeine trackers I’ve tried.

RECaf is available on the App Store. There’s a 14-day free trial, after which RECaf is a $4.99/year subscription.