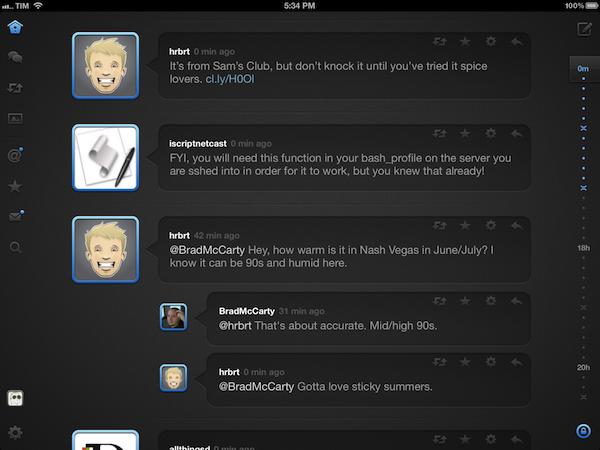 I have often written about the need for developers of third-party Twitter clients to focus on different, fresh experiences aimed at providing a new take on mobile tweeting. On iOS, as I have previously argued, apps like Tweetbot, Twitterrific, and Twitter’s official client have managed to capture a large portion of a devoted userbase split in those seeking a wide array of functionalities, a streamlined interface, or the free price tag. Quip, a new Twitter app by Glasshouse Apps (makers of The Early Edition), takes a unique approach at filtering the typical Twitter timeline by conversations, images, and retweets.

I have been testing Quip since its early beta versions, and the app has been no replacement for Tweetbot on my iPad. But that’s exactly Quip’s greatest strength and, I believe, one of its most valid points alongside a care for beautiful UI design and ease of use. While capable of being an average user’s primary iPad client because of its support for basic Twitter functionalities such as direct messages, search, and favorites, I think Quip works best as an attractive companion for catching up on Twitter and browsing certain sections/tweets that could otherwise get easily lost in a “regular” timeline. Quip doesn’t support Twitter lists, its search features are limited, and you won’t find the same degree of link and tweet manipulation options of Tweetbot.

Rather than contributing to the app’s possible detriment when compared to more advanced clients, however, Quip’s extremely specific feature set catalyzes the convenience of those Twitter-based functionalities that Glasshouse implemented.

By far, Tweetbot makes the best use of Twitter replies and conversations on iOS. In combining gestures with reply chains done right and support for Storify, you can stay assured Tweetbot will let you easily track conversations and replies, unlike, say, Twitter for Mac.

Quip tries something different, as, rather than trying to beat Tweetbot at its own game, it brings a different factor to the Twitter timeline: context. Aside from letting you choose to display mentions in the timeline from the Settings, Quip treats conversation threads as, well, threads. In scrolling Quip’s timeline, a tweet that generated a conversation with people you follow will be displayed as s single tweet, with avatars of users who replied grouped below it. There won’t be separate follow-up tweets in the timeline , as a chronologically-oriented Twitter client would normally do: tweets are grouped by conversation. To show a full conversation, you can tap on the original tweet to reveal its replies, whose authors are, similarly to Favstar, hidden behind a “…more” button when exceeding a certain number. 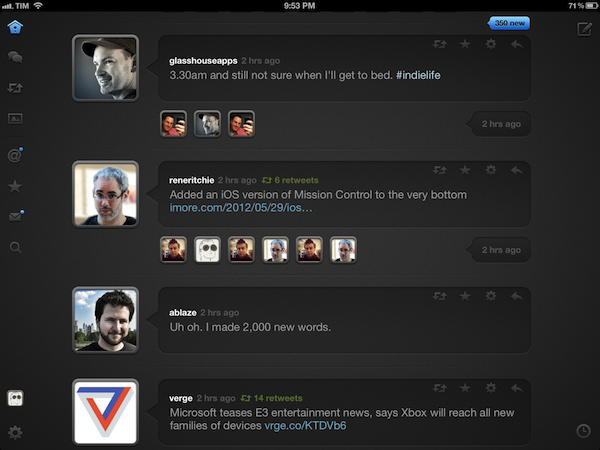 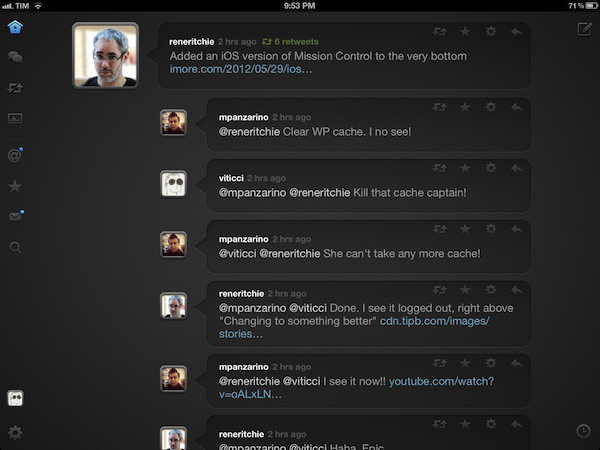 Tweets are displayed inside “bubbles” that contain buttons to reply, retweet, mark as favorite, email a tweet, or copy its link; the total number of retweets a tweet received is also visualized in green – an addition I particularly welcome in a Twitter client. You can tap on a user’s profile picture to open a Twitterrific-like popover showing following status, bio, and links to open tweets, and followers in a separate view. You can also follow, mention, message, block, and report users as spam from this popover. 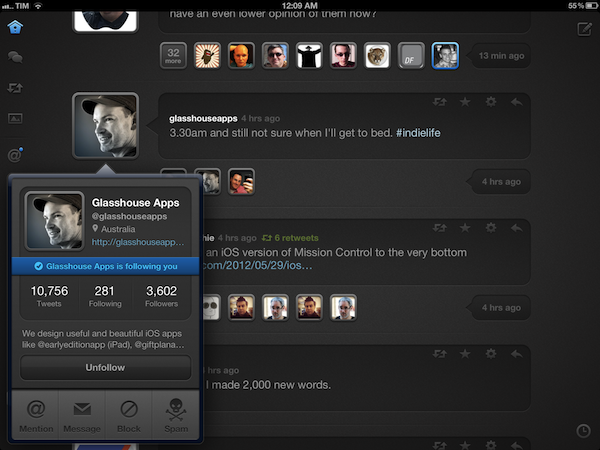 I like Quip’s take on conversations as it helps de-cluttering the timeline from single tweets that I often find difficult to catch up on, or that would otherwise require some kind of manual effort in re-building the original conversation and find the author of a tweet that caused reactions and replies. If you follow a lot of people like I do and like to read every single tweet, waking up to hours of scattered conversations and replies can be frustrating, and, in my case, it generally leads to skipped conversations or missed status updates. Quip makes it easy to group “related tweets” inside a single, expandable menu that provides the right amount of information. I also like how the app lets you perform the “rebuild” action manually for any tweet – just tap & hold on a user’s avatar next to a tweet, and Quip will attempt to “complete the conversation”. This can be useful in searches, for replies to very old tweets, and to load all replies to single tweets, displaying even the ones from people you don’t follow (that wouldn’t normally appear in your timeline).

If you want to only browse conversations, Quip provides a dedicated tab on the left to focus on tweets from people you follow that received replies. As in the main timeline, tweets are sorted chronologically by newest reply, not by original timestamp.

The side effect of Quip’s focus on conversations is that refresh times aren’t nearly as fast as Tweetbot’s. The app features pull-to-refresh with a lovely flapping-wings animation that is consistent throughout the UI (it’s also seen in the Compose window), but loading recent tweets and completing conversations in the timeline will take more seconds than other apps. 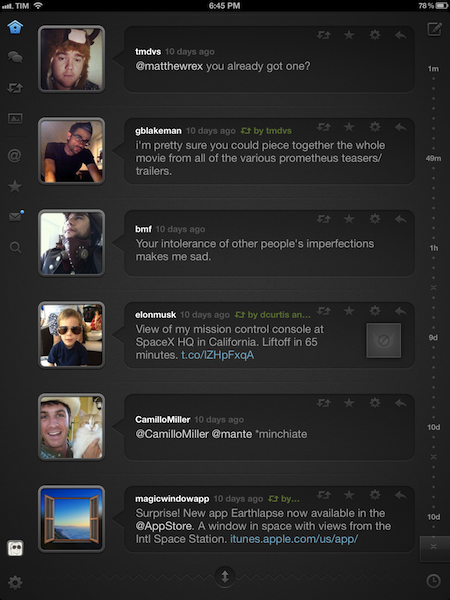 Speaking of performances, I found Quip to be quite snappy on my iPad 3, but not as smooth and responsive as Tweetbot or Twitterrific in scrolling through tweets. This can especially be observed when sifting through tweets using the timeline scrubber on the right side, which can be opened with a swipe or by tapping on the clock icon at the bottom. The scrubber can also be “locked” to a specific point in time to avoid accidental taps. 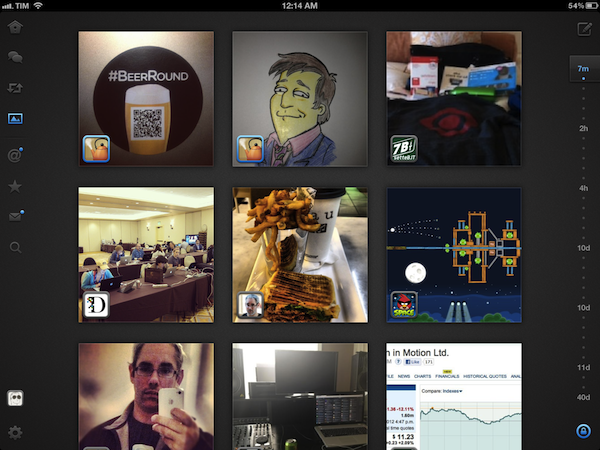 There are two more things I appreciate in Quip: the photo browser and retweets. The first is a dedicated section that displays tweets including photos on a great-looking grid of thumbnails similar to Twitter’s own web-based photo gallery view. Tapping on a thumbnail will enlarge the picture revealing a “tweet detail bar” underneath it; tweets containing multiple image links will be grouped in “stacks” that you can swipe horizontally. 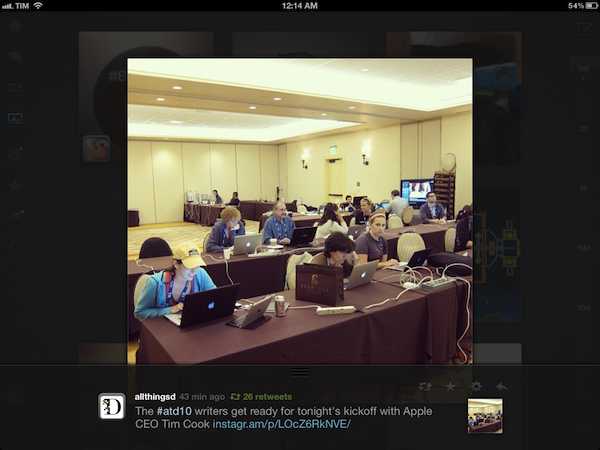 Located above photos in the sidebar, the retweets tab is another handy filter to only view tweets that have been retweeted 5+, 10+, 20+ or 50+ times (adjustable in the Settings).

Quip is no Tweetbot killer, but it doesn’t have to be. I wouldn’t recommend the app to the power user looking for deep service integration, sync, and a plethora of other Twitter features; instead, I think Quip is a good standalone Twitter app to use in conjunction with your primary client to catch up on conversations, browse images, and have a better understanding of retweets.

Quip is rolling out in the App Store and will be available later today in the US at this link.