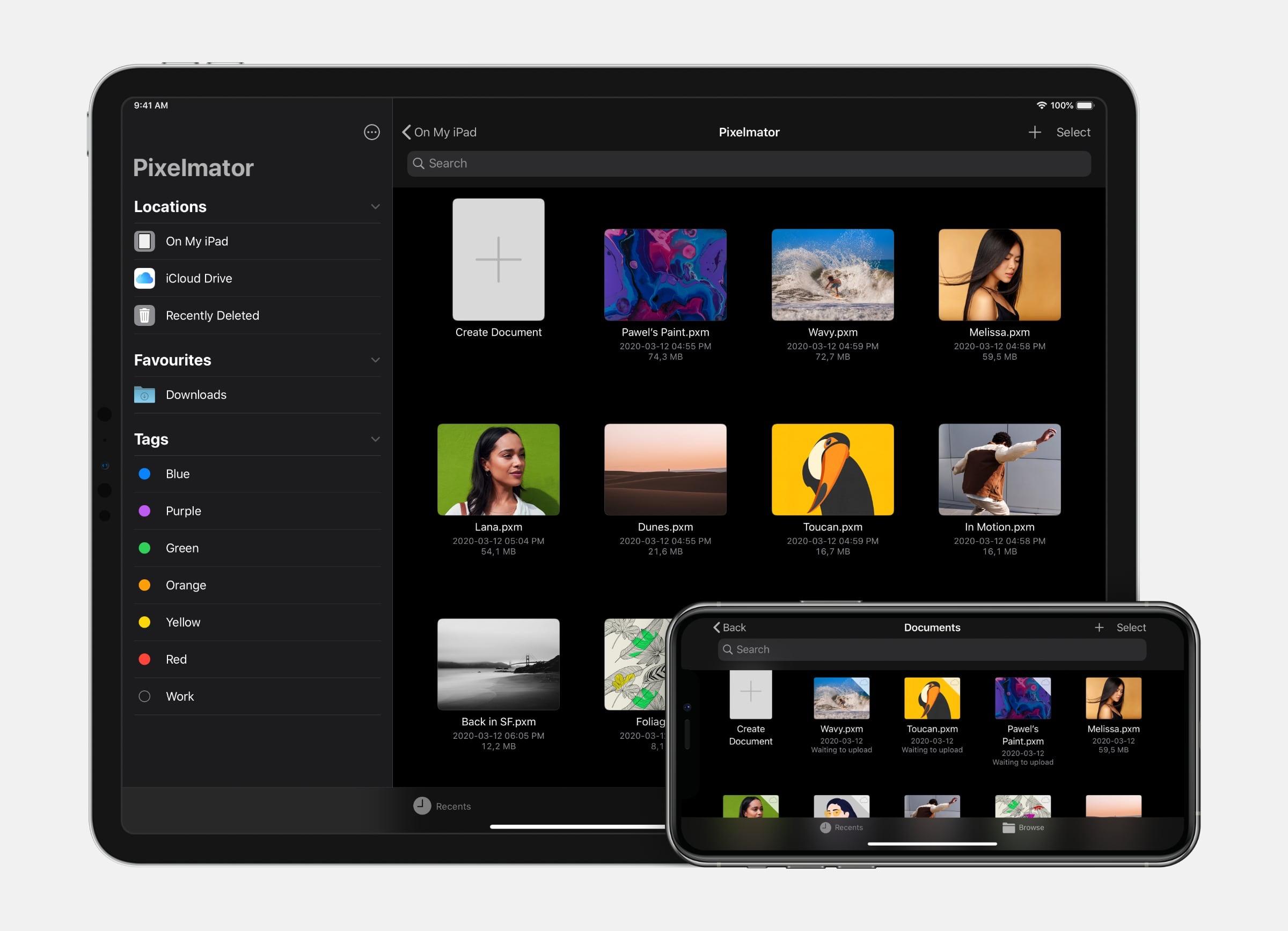 The document browser in Pixelmator.

Pixelmator is one of the few apps I’ve used longer than anything else. Over time I regularly change up task managers, email clients, note-taking apps, and more, but nothing has ever come close to replacing Pixelmator for me. In fact, last summer I had to try living without it for a time while the app was briefly incompatible with the iOS 13 beta. Try as I might, I could find no replacement for the excellent layer-based image editor.

Not even Pixelmator Photo, the more modern photo editing tool, could replace the original Pixelmator. It wasn’t exactly intended to, since the apps specialize in different areas, but the standard Pixelmator nonetheless felt light on meaningful updates even before the release of Pixelmator Photo. My fear was that eventually the app would be discontinued.

Pixelmator 2.5, launching today, is strong evidence that that’s not going to happen. By transitioning the app to the Files document browser, designing an all-new photo browser, and adding a rich collection of new image size presets, Pixelmator’s team has crafted the app’s biggest leap forward in years and set it up for a strong future.

Following in the footsteps of its sibling app, Pixelmator now supports the Files document browser as its root view, enabling users to create, store, and browse images across a variety of cloud services and file providers. The document browser is essentially a replication of the Files app’s interface, providing direct access to iPadOS’ file system and all of its various file sources. With this change, you can now store your Pixelmator files inside Dropbox, a different folder in iCloud Drive, or any other file provider location. You can also take advantage of native Files features when organizing your documents, such as tags and drag and drop. Transitioning to the document browser is a fantastic move for Pixelmator. 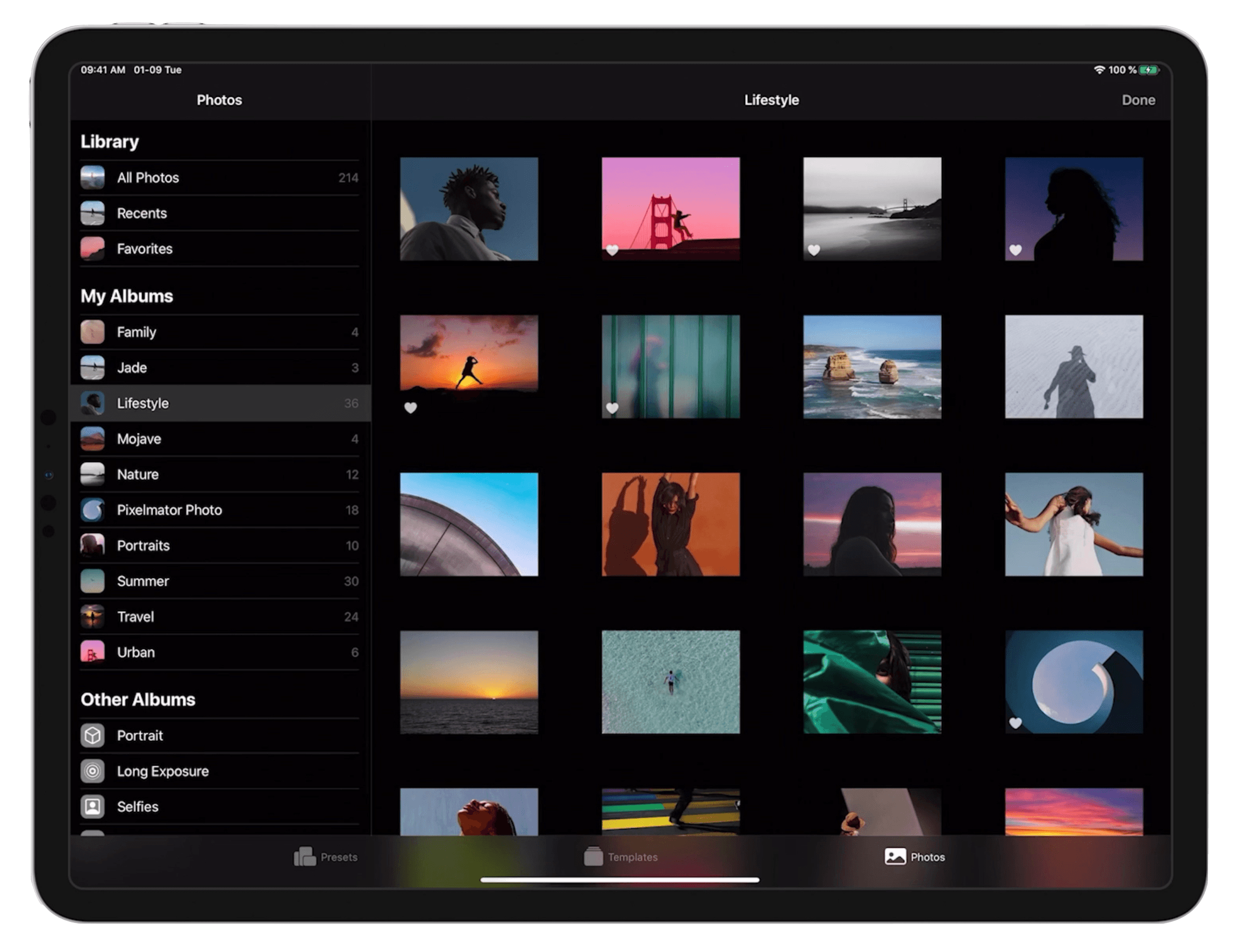 Alongside this change, Pixelmator has also introduced a new way to view and browse images saved in iCloud Photos. When creating a new Pixelmator document, you’ll see three tabs representing different starting points for the document: Presets, Templates, and Photos. The latter tab presents the redesigned photo browser, where all of your albums are listed in the left sidebar and images are laid out in a grid on the right. Upon selecting one of these images, you’ll see the option to import it into Pixelmator.

If you’ve used Pixelmator Photo, both the document browser and redesigned photo browser will be extremely familiar, as they’re nearly identical to what you’ll find in that app. I’m glad to see both apps unifying in design, making for a more seamless experience no matter which tool is best for your present editing job.

Presets for every occasion.

The final change of today’s update is a host of new image size presets, which are accessible from the tab bar I already mentioned when creating a new document. These enable you to create images that are automatically configured to the dimensions you need. Though Pixelmator has always offered a selection of presets, the new lineup is far more extensive. There are presets spanning nine different categories:

In total, Pixelmator offers 97 preset options to choose from, spanning things like Twitter Cover, Instagram Profile Image, iPhone App Icon, Pro Display XDR, and more. Depending on your area of work, I’m guessing you’ll find some presets that are valuable time savers for you.

Pixelmator 2.5 is an excellent update that places the app on a strong new foundation. Though the document browser and new photo browser may seem like unremarkable changes, since they’re largely carry-overs from Pixelmator Photo, they nonetheless serve to modernize the app in key ways. While I was hoping to see optimizations for the iPad’s cursor in this update as well, particularly since Pixelmator Photo recently received them, I’m now at least hopeful that Pixelmator will receive those updates in due time. Maybe the app’s updates will continue lagging behind its sibling at times, but at least now Pixelmator users can have confidence that this excellent tool is still being actively invested in, and that’s what makes today’s update especially worth celebrating.

Pixelmator 2.5 is launching today on the App Store as a free update to existing users.