As Federico and I discussed on AppStories this week, PDFs are a big part of the work day for many people. There are several solid PDF apps for iOS, but one of my favorites is PDF Viewer by PSPDFKit, the maker of a PDF viewing and editing SDK that many well-known companies use to integrate PDF functionality into their apps.

One of PDF Viewer’s advantages is that it’s free. With version 3, PDF Viewer’s core functionality remains free, but it is introducing a Pro Pack that is a set of advanced features available as part of a $9.99/year or $2.99/3-month subscription.

It’s a savvy move and one that’s been well-executed. By first building a free PDF app with functionality that rivals established paid apps, PDF Viewer has made a name for itself in a crowded market. The broad feature set of the free version of PDF Viewer, which we’ve covered in the past here, here, and here makes it hard for someone to argue that the app is only useful if you pay for the In-App Purchase. That’s just not the case. If you work with PDFs every day, you’ll love the new pro features, but the app’s free version still serves more casual users as well as ever.

Because we’ve covered PDF Viewer’s core functionality in the past, I’ll focus on the Pro Pack, which offers new advanced editing, collaboration, and presentation features. If PDF Viewer is new to you though, check out the stories linked above to learn more about its new features.

Best of all, the action is non-destructive: the merged version is a copy of the combined individual documents, which are still available as standalone files. The new document is named after the first PDF in your merge list with the helpful addition of ‘(Merged)’ to make it easy to distinguish from the other documents in the browser.

Merging can be accomplished from the document editor too. With a PDF file open, tap on the button with the grid icon so you can see the pages as thumbnails. Next, tap the ‘Edit’ button. At one end of the toolbar is a document icon with a ‘+’ symbol on it. Tap that button to copy and ‘Select Source Document’ to open a document browser view from which you can pick another PDF to merge into the one you have open. Finally, tap the checkmark icon at the other end of the toolbar to save or discard the changes. Note that merging doesn’t work with password-protected documents or images.

In addition to combining complete documents, PDF Viewer lets users, copy and paste individual pages. The process is similar to merging another PDF file into an open document described above. Instead of tapping the document button with the ‘+’ symbol on it though, you tap the button with the icon of a clipboard and an arrow pointing at it to copy the selected pages. Next, select the page after which you want your copied pages to appear, and tap the button with the clipboard icon with an arrow pointing away from it to paste the pages. Copying and pasting can be done with any number of pages and across open documents in different tabs, or even with documents that aren’t open by backing out to the document browser and opening up the destination document.

The Pro Pack also adds non-destructive image editing. PNG and JPG files can be added to PDF Viewer and marked up with comments, drawings, and PDF Viewer’s other editing tools just like PDFs, but without converting them first to PDFs. Document metadata, like author, subject, title, and keywords can all be edited with the Pro Pack too. The same view is used to modify document permissions and set a password.

Editing metadata and password-protecting a document.

If part of your PDF workflow involves passing PDFs around to collect comments from colleagues, you’ll be interested to know that the Pro Pack includes excellent commenting tools. Comments can be placed anywhere in a document and are tagged with your name. Other users with whom you share the document can leave their comments in line and set the status of the comment to accepted, completed, canceled, or rejected so other reviewers know where things stand on each. The comment icon and its color can be changed too. I can imagine that this feature would be a handy way to decipher multiple sets of conflicting comments from a group. 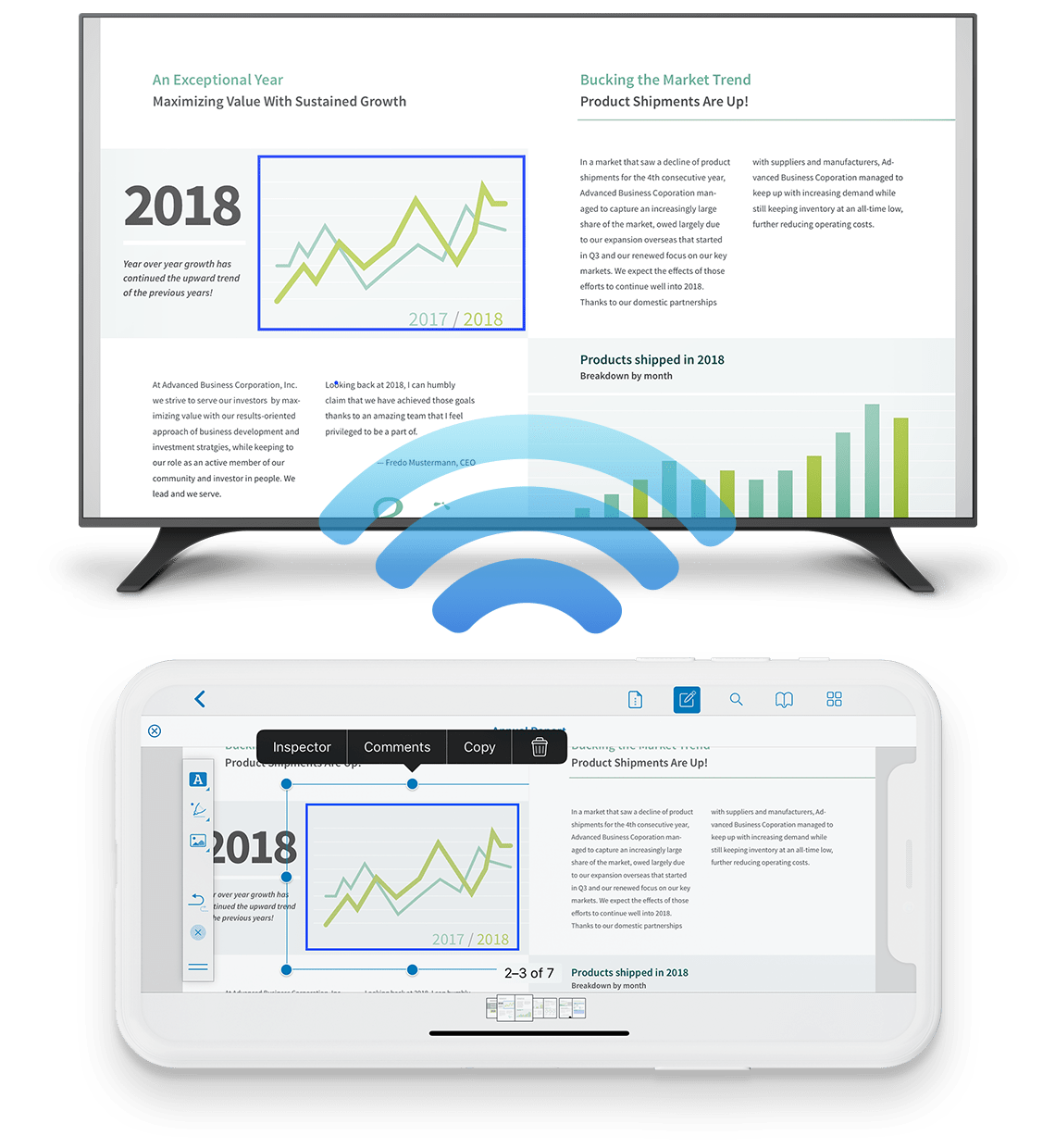 PDF Viewer Pro includes a presentation mode too. Connect your iOS device to an external display, projector, or Apple TV, and you can page through a PDF for an audience. Toolbars and other UI chrome disappear, and only the document is visible to viewers. I tried mirroring my iPad to an Apple TV, and the connection and navigation process was smooth and looked good on a big screen. This is the sort of feature that should work equally well well for formal presentations in front of a large audience as it would in a small group setting in a conference room.

Finally, it’s worth noting that PDF Viewer has added numerous advanced settings, some of which are exclusive to the Pro Pack. Among them are new settings to:

My greatest wish for PDF Viewer is for an equally capable Mac app. There are other good options on the Mac, but the ability to move seamlessly between a document on both platforms with my reading position synced and with the same familiar tools would be ideal. Hopefully, that is something that PSPDFKit is considering for the future. I would also like to see more extensive keyboard shortcuts incorporated into PDF Viewer to reduce the tap-heavy interaction with the app when it’s used with an external keyboard.

PDFs have become a de facto standard for sharing documents. Whether you download a single-page PDF calendar for an organization you belong to, a manual for your new refrigerator, or hundreds of pages of legal documents for a big merger deal, chances are they are all PDFs. The strength of PDF Viewer is that it scales across all of those use cases equally well. You may only want to view the calendar you downloaded or highlight a few passages of the manual to your refrigerator, in which case the free version of PDF Viewer is perfect. But if you’re collaborating with others on those merger documents, collecting comments from multiple people and want to password-protect them because they are highly confidential, the Pro Pack has you covered.

PDF Viewer is available on the App Store as a free download. The Pro Pack is available as a $9.99/year or $2.99/3-month subscription.