That of taking notes on the iPhone it’s a trend that won’t expire soon. There are hundreds of applications available for download which let you store / clip / organize / backup those small snippets of text you take on the go. Simplenote, Evernote, Shovebox, AwesomeNote, Idea Organizer..I’ve tried many of them, I love many of these apps.Today I’ll take a different approach and talk about an application that doesn’t simply store a group of notes. Well , it can do that too actually, but it can also store pictures, folders and 99 items from your clipboard history. It can even sync with your Mac. And it’s sexy.

Tapbots is an iPhone development house, well known for their awesome and useful applications Convertbot and Weightbot. Today the Tapbots guys have just released a new application, priced at $1.99, which could become your new data management iPhone app. It seriously could. Pastebot is showcased as the ultimate clipboard manager for your iPhone: they say “Command Copy and Paste”. Indeed, it’s a great clipboard manager, with many features other apps don’t have: 99 items, information about the items you’ve stored, built-in editing. Basically, Pastebot works like this: once you’ve copied something from anywhere on your iPhone, you have to launch Pastebot to let the app store the last item you’ve copied. Wouldn’t it be easier to automatically send the clipboard history to Pastebot? It should be that way, but you know - due to SDK limitations it can’t be done right now. I think Tapbots was forced to develop an app that imports the clipboard only on relaunch: even with Backgrounder activated on Pastebot, automatic import doesn’t work, it needs to be relaunched. Or was it their own choice? Mark Jardine knows.

That said - and if you accept this way of working - Pastebot is one the best, most complete applications I’ve tried in these past months. Together with Tweetie, AwesomeNote, Read It Later and MoneyBook, Pastebot is more than what the App Store description page says. Hell, this is not just a clipboard manager. It’s a data organizer, plain and simple. With the awesome addition of clipboard history.

Anyway, let’s see how this thing works. Everytime you’ll import something into Pastebot that something will go into a slot in the Clipboard section. 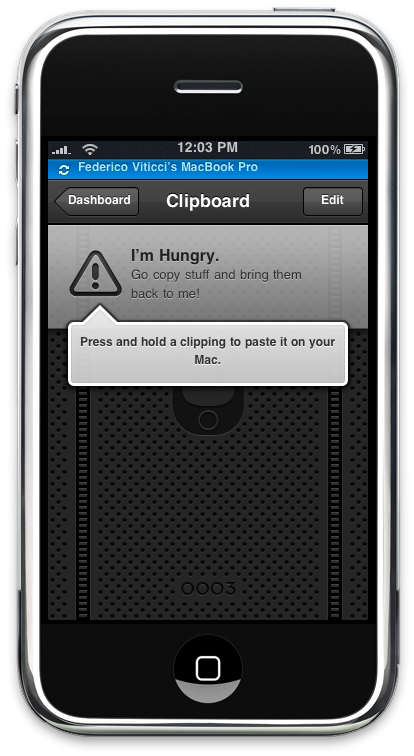 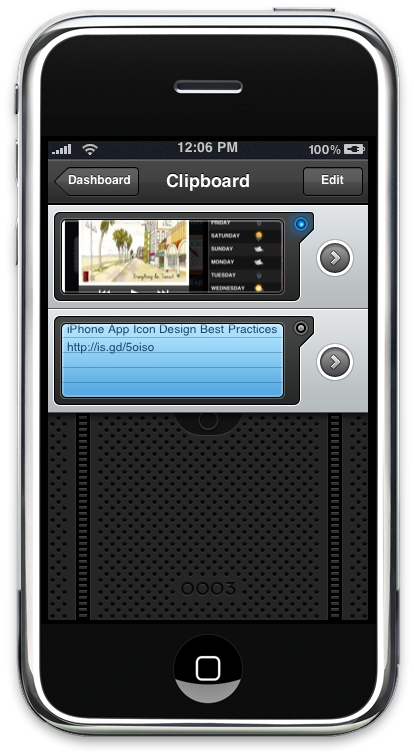 It can be a selection of text or a photo, Pastebot will support it. There are thumbnails that give you a beautiful preview of the stored items and you can also search within your “Library” by simply pulling down the screen.Tap on the thumbnail preview and a submenu containing the item’s details will slides down, together with the Send to and Filters buttons.Moreover, a blue light next to the item will indicate that the items has been copied again to your clipboard. If you click on the arrow next to each item instead you’ll be able to either edit the note or view the full version of a picture. Speaking of notes, you can edit the main body, see the character and word count, date, edit the title and even send it as email or move it to a folder. Folders are a great feature of Pastebot, I’ll talk about it later.From the same screen you can tap on the gear icon which will bring up the Filters menu: there are many filters already available, like Convert to Uppercase and Lowercase, Find and Replace, Quote Lines and Smarten Quotes. I would have called this menu Actions, but that’s it. The cool thing is that when you select a filter the app doesn’t switch to the previous screen but the whole filter window slides at the top revealing the note you were editing. To reveal the Filters again just tap on the < symbol and here you go, the screen slides again. The animations are smooth in pure Tapbots style. God knows how much I love these little things. By the way, the notes editing system works perfectly and the character count thing could be really come in handy for people who want to save drafts for their tweets. Could this mean the end of Birdhouse? Maybe, if only Pastebot will have a “send to Tweetie” action in the future. 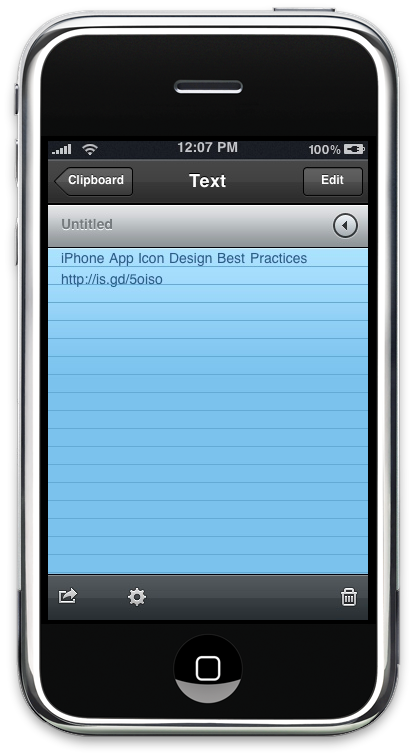 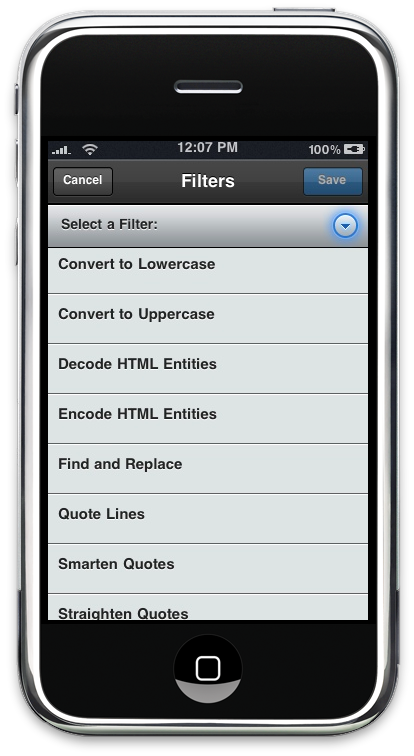 Moving to pictures, things get even more interesting. You can save an image to the Camera Roll (and Pastebot will play a cool sound notification too), send as Email or, again, move to a folder. Filters are obviously different from the notes’ ones: there are 5 filters (Brightness, Black and White, Invert, Saturation, Sepia) which you’ll be able to adjust with a slider. Just as in the notes screen, filters slides up / down from the top. There’s even more: if you tap on the edit button, not only you can enter a new title, but you can also rotate and crop the picture.You can preview the crop before saving it. Is this the end of all those Camera apps out there? Yes, Pastebot can easily replace them now, and with a better interface.

Last, you can manually add items to the Clipboard by tapping the + button and hit Add: you can choose an image from Library, shoot a new one or enter some text. And that’s for the Clipboard.

Let’s talk about the folders and why I believe it’s the greatest thing about Pastebot. Well, I said Pastebot is so much more than a simple clipboard application and that’s because of this Folders feature. Let’s say you want to permanently store items into Pastebot because you don’t trust the Clipboard’s 99 items limit. That’s fair. To avoid this, you can just move an item to a folder and it will stay there as long as you want to.The interface is the same of the clipboard, it’s just a different way to organize your stuff. 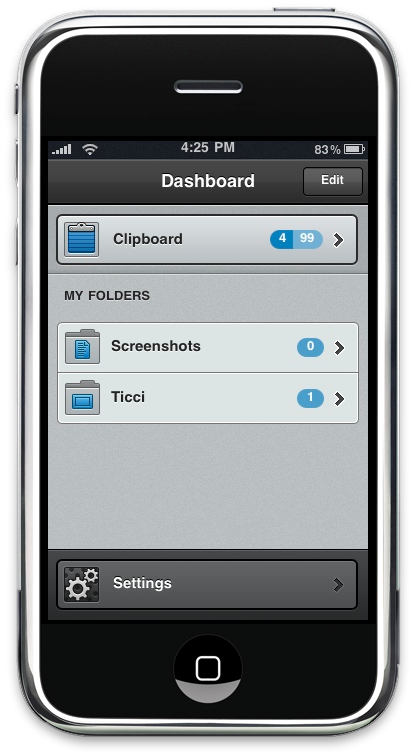 But it doesn’t stop here. If you have a Mac, Tapbots also released a free preference pane called Pastebot Sync which allows you to share your clipboard between your Mac and your iPhone. You heard that right: pair the devices, leave Pastebot running on your iPhone and you’ll be able to live share your clipboard from / to your Mac. As Mark Jardine says in the video below, “it’s almost like magic”. It truly is. Just imagine the possibilities this app is opening: you can insert things into iChat, copy files from your Dropbox folder on your Mac to the iPhone, search for wallpapers on your Mac and send them in 2 seconds to your mobile device. It’s up to you. Amazing. 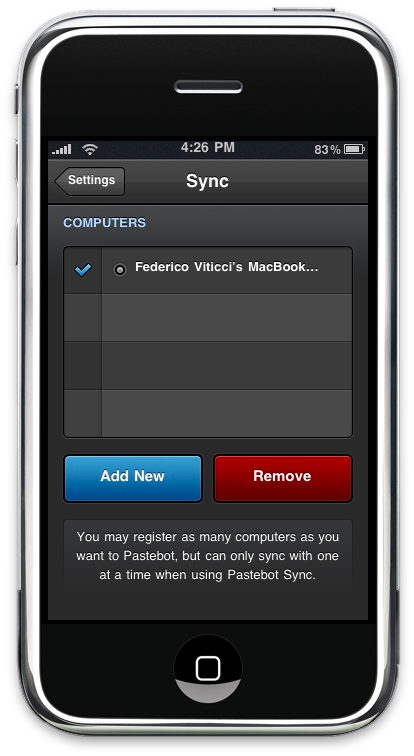 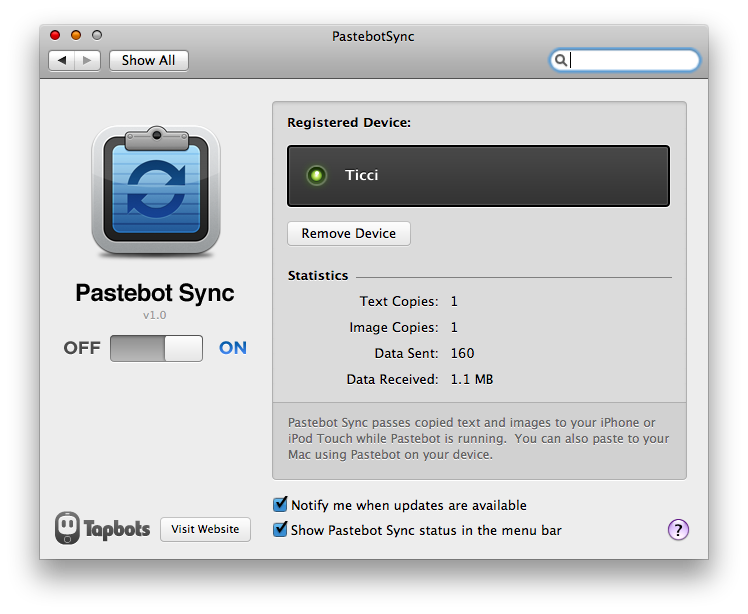 Overall, I’m seriously impressed by Pastebot so far. Turns out it’s one of the greatest apps I’ve tried recently: feature-rich, stunning interface, endless possibilities for the users. Though it’s a 1.0 release, Pastebot already claims the throne for the best data management app in the App Store. There are a few drawbacks I’d like to mention anyway: first, Pastebot doesn’t recognize http links. It just acts as if they’re simple text notes, which is not good. If Pastebox supported links we could be able to - for example - store bookmarks into a folder or even save a web page for later. Then, I’d also like to store Voice Memos into the library: if you try to copy a voice memo and import it into Pastebot, it just copies the details of the memo in the form of text. Last, two other things I mentioned above: twitter integration and background running mode. If the Tweetie thing shouldn’t be that hard to develop, I know the background process is pretty impossible, thanks to Apple. But, they could support Backgrounder for jailbroken phones, right? Ok, I’m just dreaming, they won’t ever do that.

However, Pastebot is awesome. It does so many things in so many easy ways you have to buy it [iTunes link]. And we’re talking about Tapbots, so I believe many other features will come with the next updates.

Has Pastebot changed my workflow? It surely has. Is it among the best new applications of 2009?