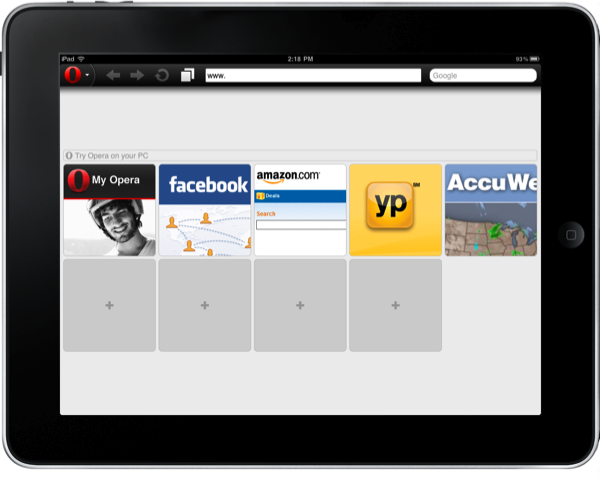 There isn’t any stiff competition on the iPad when it comes to third party browsers, but one could arguably assert that Opera has a widely recognizable name when it comes to the mobile browser space; we’re sure the Opera community would enjoy additional exposure on iOS alongside the dominant focus on Android. Unfortunately, Opera’s attention to Android has tended to be a problem when it comes to curating its iOS app. When Opera for the iPhone launched to the surprise of many in 2010, the app fell by the wayside with a lack of enthusiasm and was seemingly forgotten about as Opera for the iPhone never updated to take advantage of the Retina Display. Opera had seemingly lost interest in supporting iOS, that is until an updated Opera Mini 6 landed on the App Store as a universal app, bringing an updated interface and some extra polish to their mobile app. It remains to be seen whether Opera will continue to provide consistent updates to their mobile browser on iOS, but that doesn’t mean we won’t provide our take on the current “red O”. 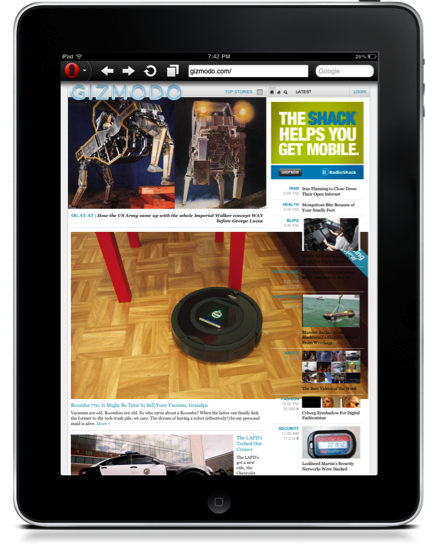 The immediate difference between Safari and Opera is how Opera renders web pages with Opera Mini. As Opera can’t build the Presto layout engine (Safari uses webkit) into their app, Opera Mini proxies webpages through their own servers, delivering a web page that supports Opera proprietary technologies such as Opera Turbo for compression. This can be a terribly good thing under AT&T’s stingy 3G plans, however, those with a decent Wi-Fi connection at Starbucks will quickly ask themselves whether Presto and page compression are a good thing.

Both Android’s web browser and Mobile Safari take advantage of good mobile web pages, webkit formatting, and don’t tend to bastardize full sites. The problem is that Opera Mini still feels like it’s stuck in the early 2000s. Let’s look at the difference between these two Google mobile search pages on Opera and Safari. 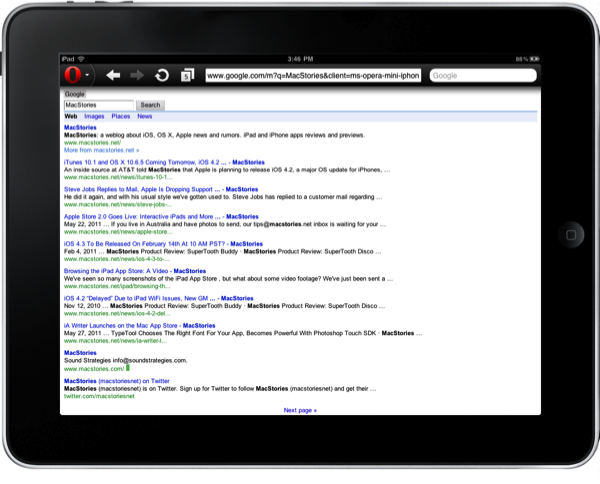 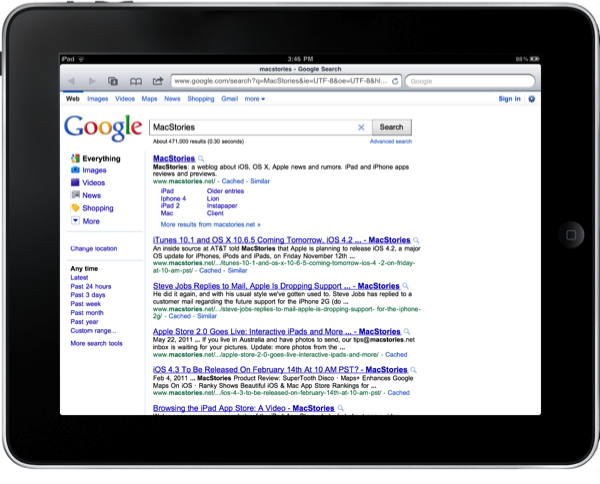 There’s many cases where Opera simply isn’t compatible with a website, either formatting images incorrectly or not adhering to the mobile rules defined by the site. Both the iPhone and iPad version share the same issues in inconsistency, and it feels frustratingly outdated when it comes to browsing the web. When attempting to visit Slate for example, I received the following message. 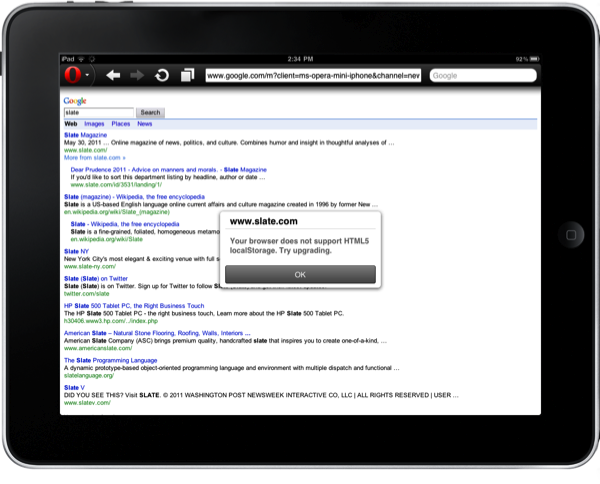 Presto aside, Opera doesn’t necessarily get everything right when it comes to the browser either. For example, turning on the mobile view in the settings can be sketchy at best, although it has improved - to Opera’s credit - quickly after launch.

There’s other little missing or confusing bits and pieces to pick up along the way as well. Like Safari, Opera separates the address and search bars in the browser. Unlike Safari, Opera gives users the option to change their search engine to Amazon or eBay for example. If you want to add a search engine, confusion begins as you can delete extraneous engines, but not add them. If you can in fact add Bing or some other service, it is unclear from the search engine manager. 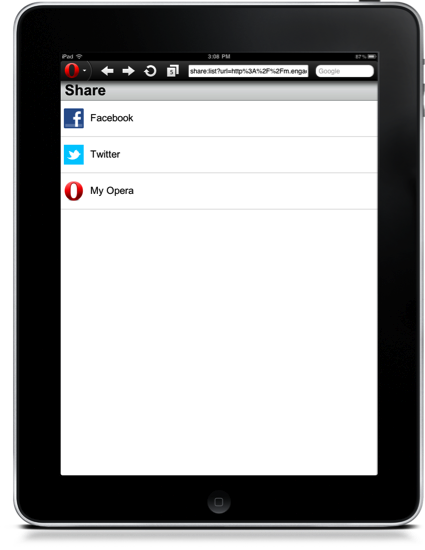 Sharing is implemented poorly (perhaps it’s pointless) as you’re redirected to either Facebook or Twitter to share the page you’re on. Opera missed an opportunity to cut down on the extra steps by integrating it directly with the browser, and it’d be nice if I could add other services as I see fit. I should be able to at least share the page by email, which Opera Mini can’t do.

Lastly, Opera opts for their own text selection tool over the standard iOS controls. While selecting text isn’t terribly difficult, there are no standard copy and paste controls, nor are there any indicators to help you readjust and select text. Opera’s implementation is a pain-in-the-butt if you want to copy text from a webpage, and that might the final nail in the coffin for some. 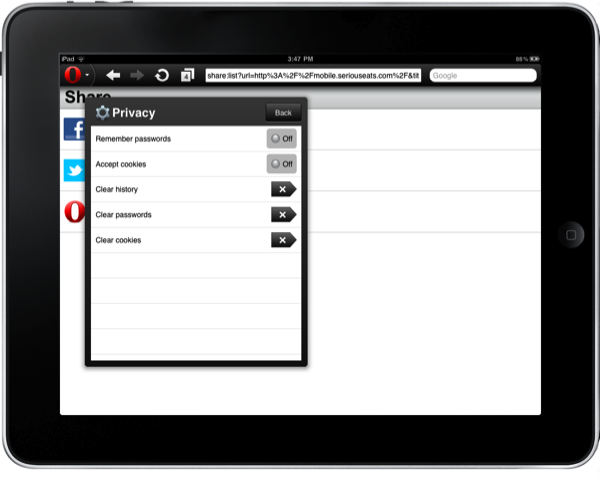 The biggest problem about Opera would be the engine behind the browser, but the browser itself is actually pretty nice. There’s a few good ideas implemented here from tab management to browser navigation, and I quite enjoy Opera’s integrated settings for easy cookie and history management.

Pay attention to how the back and forward buttons are handled for example. With Safari, pages will simply reload as you page back and forth through websites. With Opera, pages slide into view already loaded and ready to browse. Perhaps this is my favorite feature of Opera Mini, simply because it’s cool to look at and works as elegantly as you’d expect it to. 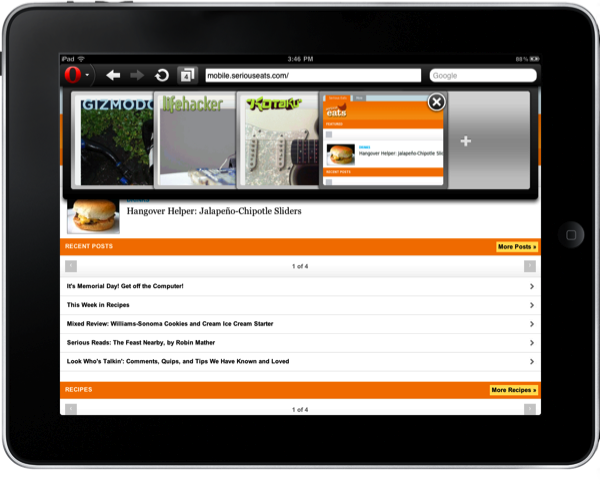 Tabs work like a charm as well, allowing you to easily open a bunch of websites and navigate between tabs more fluently then other browsers available on iOS. Pages don’t reload, although there may be a slight fade transition as websites are brought into view. You can queue up a bunch of websites to load in the background, but I found loading several websites at once tended to take a long time. It is possible, though, without reloading between websites. 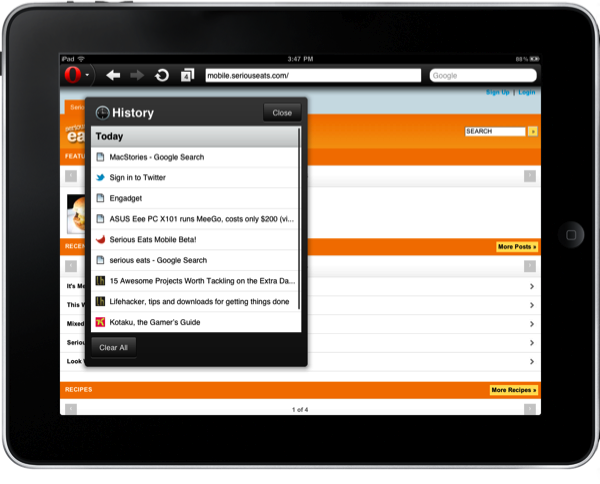 I’ll argue that Opera’s browsing history is easier to find and use than it s Safari competitor, and the settings provide a lot of ways to bend websites to your will. If you’re on a terrible 3G or EDGE connection, you can disable images or compress them so websites load faster. This makes a dramatic different if speed is a concern, in which case formatting won’t be an issue.

Opera Mini 6 is a great choice when you’re on a mobile connection, and data spent is more important than website formatting. Unfortunately, the browser’s good ideas are hindered by the website formatting itself, resulting into sometimes frustrating experiences when faster connections are available. Safari appears (an important distinction) to be faster in most cases until you start compressing or turning off images in Opera, which is where things get insanely zippy. Whether you want to sacrifice that part of the web experience will depend on your needs, but I still prefer the Webkit experience wherever it’s provided.

Opera will make improvements to the underlying engine since it’s server side, but will they continue to support the users who prefer Opera full-time over Safari? It’s the lack of attention and response to Opera Mini on the iPhone that originally drove users away, and I suspect more of the same will happen again. For now, Opera’s latest version of Opera Mini is fresh on the App Store and available to download for free.