I remember the iPad launch day. I also remember the grand opening of the iPad App Store - actually, we were the first ones to take a sneak peek inside it. Between the excitement and the geek dreams of a new device that would change the face of computing as we knew it forever, we didn’t really pay attention to the apps that were being submitted for approval. Six months later, it’s very easy to spot one of the best selling categories in the iPad App Store: handwriting apps. Note taking applications that let you write on the iPad’s big screen using your fingers or, if you have one (I do), a stylus. Penultimate was one of the first notable apps to sell zillions of copies.

See, I’m not usually huge on these apps. I’m faster with a keyboard, I never really got myself into a situation where taking notes manually was necessary, most of these apps don’t come with the proper exporting capabilities I need, namely Dropbox, Mail or Evernote. While they’re pretty to look at and cool to show off to your friends, I didn’t really find much value in them besides using them every once in a while to draw some random mockups.

So how on earth do I find Noteshelf worth a look?

This app will get Dropbox and Evernote integration in the next update, plus it’s got the smoothest and most beautiful implementation of “virtual ink” I’ve seen so far. Noteshelf is worth a look because it’s not ugly (I’m not making names here) and because it goes back to the main and most important element in a handwriting app: ink.

Noteshelf present a main “bookshelf” screen (similar to Apple’s iBooks app) where you can create notebooks. Notebooks can have multiple layouts, from general ones to personal and business ones. Here’s a feature I love about this app: the Business layouts have  “Day Planner” and “Task Lists” templates I’ve been playing with, and they’re good. If only the app would allow me to create my own templates or import stuff like the Printable CEO, it’d be perfect. You can create as many notebooks as you want. Once you’ve opened a notebook, you’re presented a fullscreen view in portrait mode with your blank template, while a sidebar with page navigation commands appears in landscape. That’s a huge waste of space (you can’t even scroll in landscape) and it clearly shows that Noteshelf is meant to be used in vertical mode. You can write with your fingers or a stylus, erase and clear the contents of a page. You can insert emoticons, but there’s no way to enter normal text with the keyboard. If this is a handwriting-focused app, now I wonder why the developer decided to include the emoticon feature in the first place.

Like I said ink looks smooth and “real”, way better than in all the apps I’ve tried in the past months. It feels natural and “consistent”. You can adjust the pen’s tip size with a slider, pick a different color from the (nice looking) dedicated window. Somehow, I happened to like the UI  for the pencil / eraser switcher. Last, you can enter images in a page and quickly move between pages using a popover controller in the top-right corner.

What totally convinced me to pick Noteshelf as my go-to app for handwritten notes, though, is wrist protection. When people write, they usually rest their wrist on paper - that’s natural and necessary to have a correct writing position. Well gentlemen, unlike all the other apps available for iPad, Noteshelf has an option to not detect your wrist as an active touch on the screen. Welcome to natural and human writing on a tablet.

As for features I’d like to see besides the upcoming Evernote and Dropbox integration and a template creator, it’d be nice to be able to pinch and zoom on pages, especially in landscape mode. I also don’t like the fact that you can’t select multiple pages when exporting them (email and iTunes are supported).

Noteshelf is hands down the best handwriting app currently available in the App Store. Great virtual ink rendering, nice UI, fast, lots of neat features coming in the next updates and many templates to choose from. I recommend this. $4.99 in the App Store. 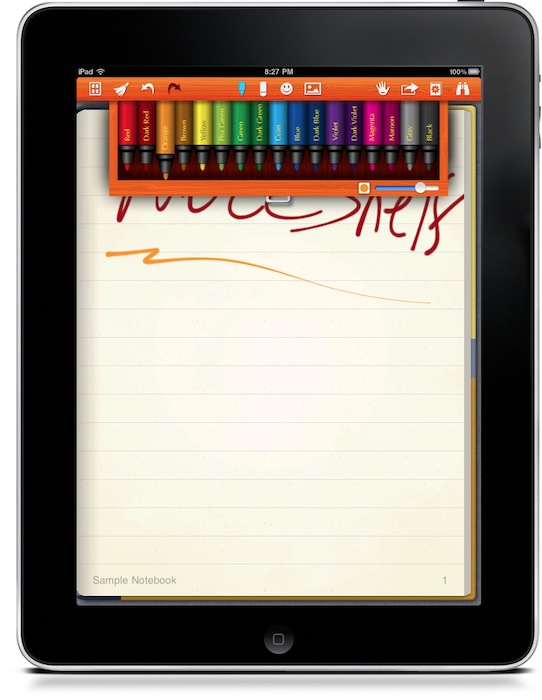 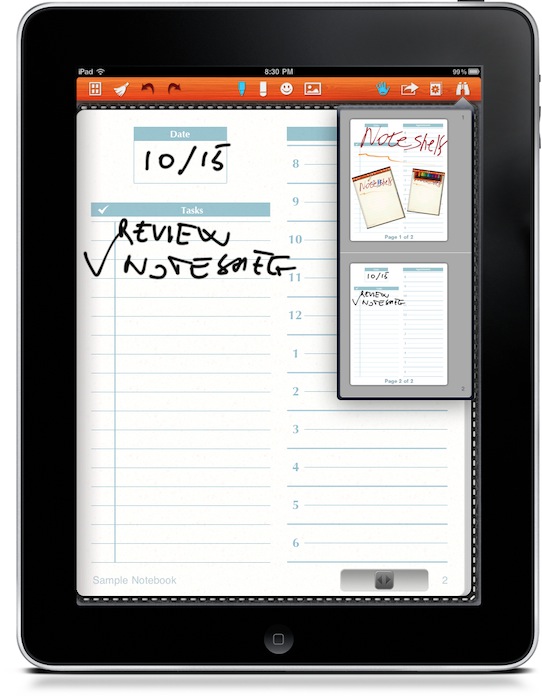