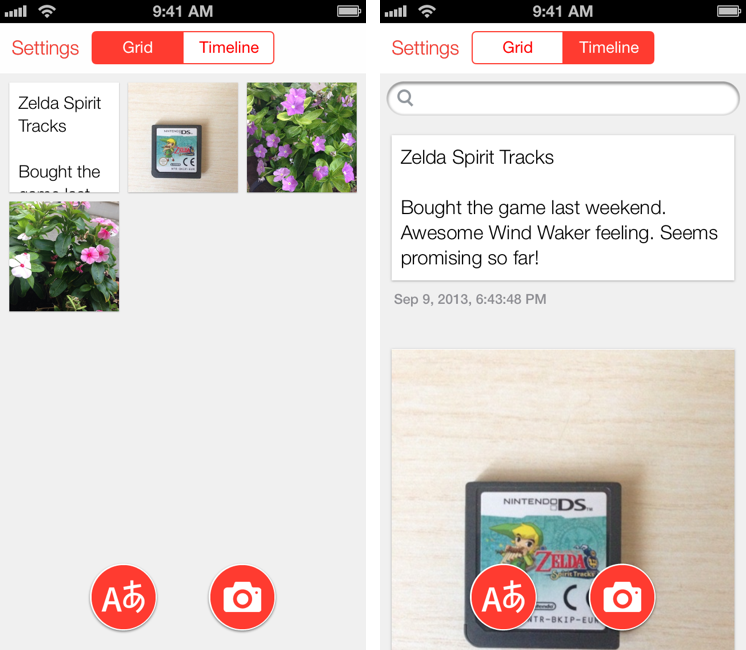 Developed by Japan-based rakko entertainment (the same team behind FastEver), NoteCube is a $0.99 iPhone app that lets you quickly take text and photo-based notes and sync them with Evernote. I have been using NoteCube on my Home screen lately, and I think it provides a great way to quickly send bits of text and images to your Evernote account.

First, the icon and UI. NoteCube runs on iOS 6, but the developers have been clever in designing an iOS 7-ready interface for the app, starting from the simple shape of the icon and extending the app’s focus on content to the main screen. Notes can be viewed as thumbnails on a grid or sorted by time in a Timeline view, and there are some nice animations for scrolling through notes and opening them. The app’s name derives from the 3D animation that flips the main screen as you reveal a single note view. Segmented controls, toolbar icons, settings, and action sheets replicate the iOS 7 look as well – a choice that will make it easier for the app to transition to iOS 7.

Two floating buttons at the bottom of the screen represent NoteCube’s two actions: the one on the left lets you type text for a new note, and the other one lets you take a photo or choose an existing one. There are no tag, title, or notebook settings: for textual notes, you just type and save; for photos, you simply add them to NoteCube, crop them to square format, and that’s it.

What impressed me about NoteCube, besides its simplicity, is how quickly it syncs to Evernote. In my tests, adding multiple notes and photos at once only required a few seconds of waiting to see new notes show up in my Evernote inbox on the Mac. For images, NoteCube properly creates new notes with the correct thumbnail metadata for Evernote’s notes view, which ensures you can hit the Skitch button in Evernote to mark up images. For textual notes, NoteCube uses the first line of a note as title. 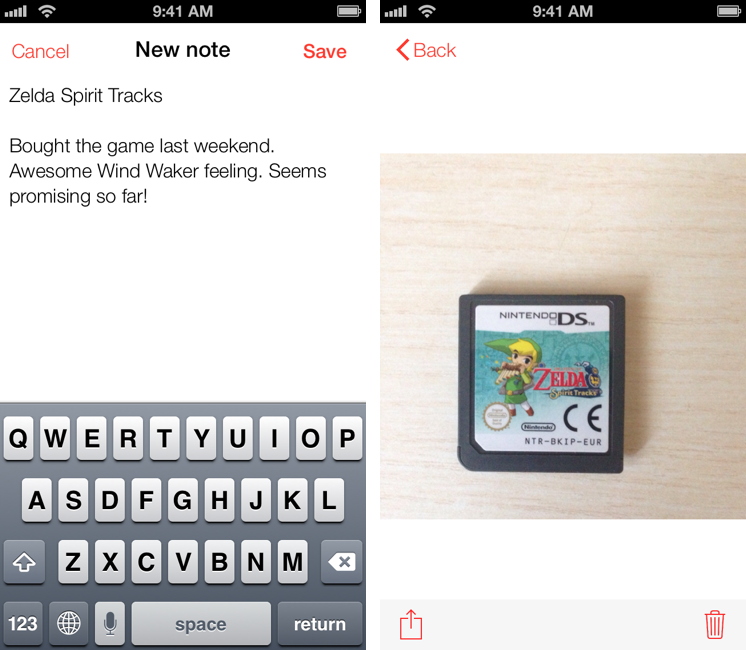 Another upside of Evernote integration is that NoteCube’s search feature, available in the Timeline view, can leverage Evernote’s image recognition to find text found in saved images. The feature worked as advertised for me, but keep in mind that results won’t be available right away in NoteCube, as the image processing is done by Evernote and that may require some time to become available in the app.

I only have a few quibbles about NoteCube. Photo notes are always created with a “NoteCube Image” title, whereas I think it’d be nicer to name them after a photo’s location information or timestamp; it would be cool to tap & hold the text and photo buttons to quickly create new notes starting from the contents of the clipboard or the last photo taken, respectively; and, of course, I would love to have an iPad version (I don’t take photos with my iPad, but I do a lot of screenshot-based research with it).

There’s no shortage of Evernote-compatible apps these days: tools like Drafts provide far more powerful note creation options than NoteCube with fully customizable actions and inter-app communication. NoteCube, however, has the advantage of supporting images (Drafts does not) and having full sync (notes deleted in NoteCube are deleted from Evernote automatically) – two differences that make NoteCube’s straightforward approach its strongest feature.

Update: As I was reminded on Twitter, notes created by NoteCube will appear as read-only (locked) in Evernote. I forgot to mention this is also another feature I’d like to see improved (or completely changed) in a future update.

I recommend NoteCube for Evernote sync and photo-based notes. The app is only $0.99 on the App Store.