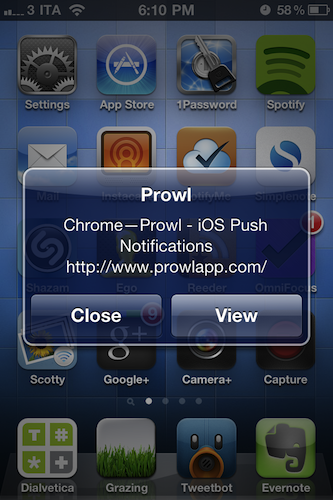 For some reason, I never considered Prowl as a viable alternative to the apps that let iOS devices communicate with a Mac. Prowl has been around since 2009 and, as the name suggests, it is an interface for Growl, the popular Mac notification system that’s getting a major revamp in version 1.3 for its Mac App Store debut. Basically, Prowl is both an iPhone app and a Mac plugin that will send Growl notifications – those Growl notifications you see every day – from your computer to your iPhone in seconds, via push notifications. On the Mac’s side, the app is entirely configurable: in spite of the fact that it’s listed under the Display Options of Growl – and so you could think it’s just a theme – its control panel comes with detailed login and notification settings to keep using a Growl theme you know and love, but at the same time build a bridge between your computer and the aforementioned Prowl for iPhone, which is a list of desktop notifications sent to your phone over the air. Prowl mirrors Growl notifications to your iPhone.

Over the weekend, I casually stumbled upon Prowl’s website, and decided to take a look at the service, which as I said is highly configurable and comes with a variety of unofficial plugins and tools to enhance the experience and bring Prowl support to other apps, like Google Chrome. The iPhone app retails at $2.99 and, being the huge fan of remote notification systems that I am, I figured I could give it a try to find out whether Prowl – again, based on the Growl app that I use every day – would be a solid alternative to other things I rely on, like Grazing Push or Push Browser. It turns out, Prowl is a neat utility that goes far beyond enabling web page sharing between OS X and iOS, allowing to do stuff like redirecting AIM notifications to specific iPhone apps, or open certain URLs on the iPhone upon receiving a particular notification.

In this article, I’ve collected the tools and apps I’ve paired with Prowl to receive push notifications on my iPhone. I know I’m late to the party and there’s so much you can do with Prowl, but rather than exploring all the options – many of which I don’t use – I’d like to focus on the functionalities I’ve come to enjoy in my few days spent with Prowl.

On the Mac, configuration is simple. Once the Prowl plugin is installed, you only have to enter your username and password to verify it, and optionally choose a prefix to assign to notifications coming from your machine. I chose “MacBook”. Because Prowl really isn’t a display theme, I also checked the option to keep using my default Mono style – this way, notifications will still be displayed using Mono but some of them will be forwarded through Prowl. Which is really the point of the app: because so many Mac apps are integrated with Growl, there’s a chance you won’t like to be bothered on your iPhone by all OmniFocus reminders, iCal events or Coda uploads that appeared on your Mac. Sure, you can make Prowl your default “style”, assign it another theme and receive all Mac notifications on your iPhone, but I believe it’s best if you keep your preferred style, and enable Prowl on an app-by-app basis. To do so, you have to head over the Applications tab in Growl’s preferences, choose an app, and tweak its Application Settings and Notifications. 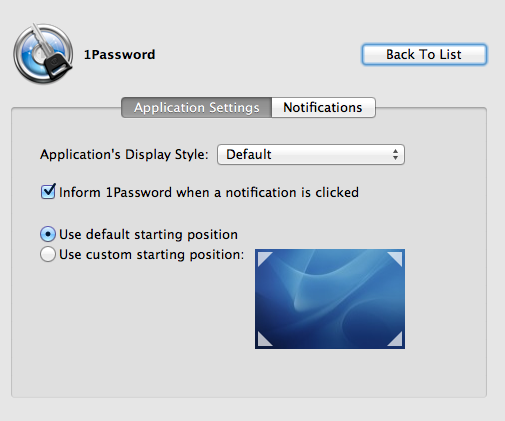 Prowl isn’t just a Mac plugin, it’s also a service with API access and a web control panel to manage tools that have access to it. When a web service (like ProwlMail) or widget like Prowler wants to use Prowl to send notifications to your account, it’ll need an API key to operate. This happens because you need to create an account with Prowl before using it, and each device configured with it (your iPhone) is associated to the account. By relying on API keys, Prowl makes it easy to grant authorization to a third-party app or service and revoke it at any time. You can manage your generated API keys in your account’s dashboard on ProwlApp.com.

I installed two browser extensions, one dashboard widget and a Mac app that integrate with Prowl through API. The browser extensions, 2Prowl for Safari and Prowl for Chrome, will simply send a webpage from your web browser to your iPhone with the title and link. On the iPhone, you’ll receive a push notification that you can tap to open the webpage in Safari. Prowler is a widget for the OS X Dashboard that allows you to enter a title and some text to send a message to your iPhone via Prowl; as you can guess, you’ll get a push notification with text you can copy, or delete. Prowlmenu shares a similar concept in that it lets you send text to your device, only from the system clipboard. It lives in the menubar, it doesn’t have a keyboard shortcut (it would be a great addition), but it’s simple enough to click and instantly send your latest clipboard entry to the iPhone, through Prowl. 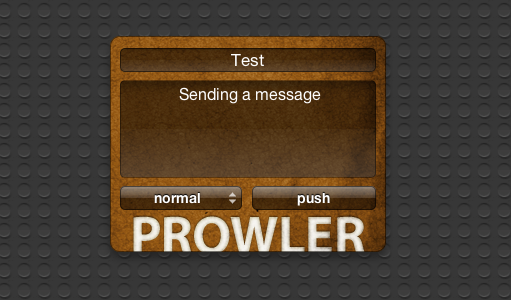 On the iPhone, my Prowl setup is still relatively simple. I don’t do redirections (which will forward a Prowl notification to a specific app) and haven’t enabled Quiet Hours yet; instead I’ve tweaked my sound preferences a little to adjust the effects for messages with low priority and “emergency” status. I also haven’t looked at Prowlmail yet, considering how the iPhone’s push mail feature has treated me well over the years. The iPhone app is really straightforward if you don’t want to mess with redirections and custom URLs – it simply lists all your incoming notifications with the name of the app that sent them (e.g. Prowler), the title of the notification, and the actual contents (a message, or a URL). Notifications can be deleted, copied, or refreshed to check for new ones. 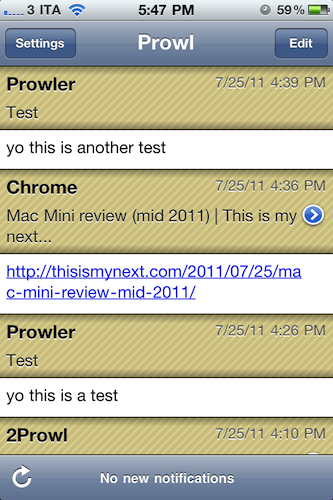 I’ve only used Prowl for a few days, but I’m impressed and, once again, surprised that I haven’t considered this before. Prowl isn’t for everyone – it’s kind of a “hack” that requires you to configure all the options you need, and the services you want to connect. But once you get the hang of it, it becomes a powerful tool to connect your Mac with your iPhone, seamlessly over the air. Obviously, I’ve got a few concerns: iOS 5 will be a big change for developers – especially as far as notifications go – and the app hasn’t been updated since last January. I have no idea if Prowl is being actively developed or not – the service works perfectly now – but the lack of an iPad version is also a bit worrying. Not to mention the new Growl, which is coming soon and it’ll apparently bring some important changes to the plugin architecture.

Update: the kind folks at @ProwlApp told me that an iPad version is almost done, and some neat new features will come with an update.