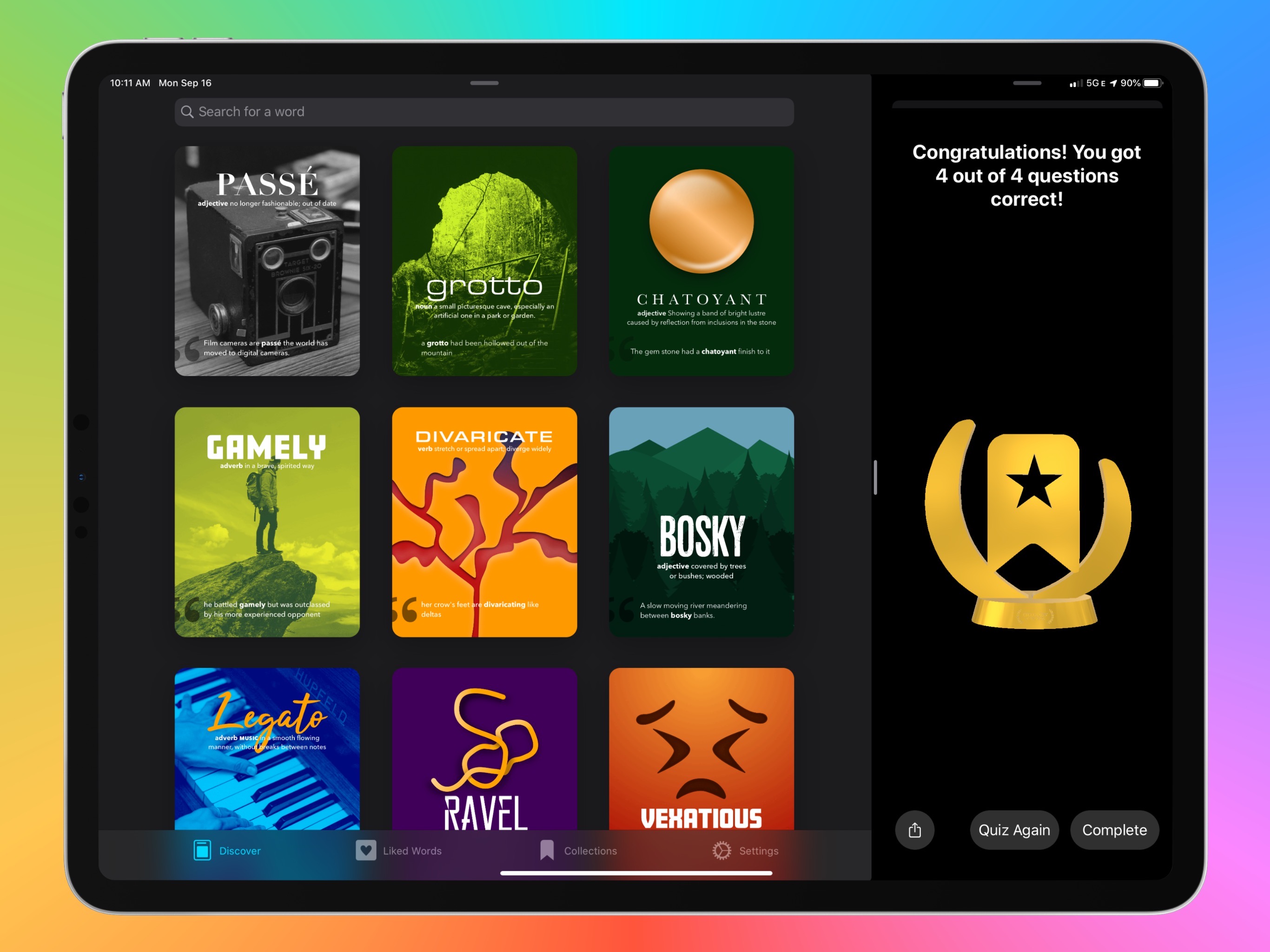 The average life cycle of an app typically consists of two phases: the app’s early days often bring a host of significant updates as it strives toward feature maturity; however, once that level of maturity is achieved, the updates become more iterative and unsurprising, largely aimed at keeping pace with new OS technologies. LookUp 6 defies that normal pattern. The sixth major version of the excellent iOS dictionary app weds two important themes: adopting all the relevant functionality enabled by Apple’s latest OS releases, while simultaneously adding substantial features like quizzes, translation, full navigation via keyboard, and more. Despite how modern and feature-rich LookUp already was, version 6 sets the app on even stronger footing at the dawn of Apple’s latest software releases.

Quizzes are available both for your liked words and any collections you’ve saved in the app. The feature’s extremely simple to use: from either the Liked Words or Collections tabs you’ll see a new ‘Take Quiz’ option, which will ask you one question for every word in that saved word group. There are fill in the blank questions, ones based on simple definitions, and others that employ synonyms of the desired answer. At the end you’ll be given a trophy based on how many answers you got right. All trophies you’ve ever won can be viewed on a separate screen, where you can even interact with them in AR.

This trophy looks like a concept prize for our MacStories Selects awards.

I love how quizzes have been implemented in LookUp. The feature is elegantly executed and a brilliant addition to help you learn new words.

iPadOS isn’t launching until September 24, but one of LookUp’s big new iPad features, keyboard navigation, is available to all iPad users today; multiwindowing, on the other hand, is also included in LookUp 6 but only users on the iPadOS beta will be able to access it now.

The entire LookUp interface can be navigated via keyboard.

In its latest version LookUp joins the very short list of iPad apps that can be controlled entirely via an external keyboard. You can switch between tabs via keyboard shortcuts, navigate through different elements using the arrow keys, and much more. And unlike more complex apps, where there’s a virtually limitless number of shortcuts to potentially memorize, as a dictionary app LookUp’s set of options is really easy to quickly adopt.

LookUp’s UI lends itself well to keyboard navigation because so many elements – such as each word of the day, and the words you like or add to a collection – have been designed with visual depth and shadows, and the app takes advantage of this when you’re using an external keyboard. As you use arrow keys to move between words, the shadow surrounding a word will shimmer to indicate that it’s the latest selection – an effective visual cue. 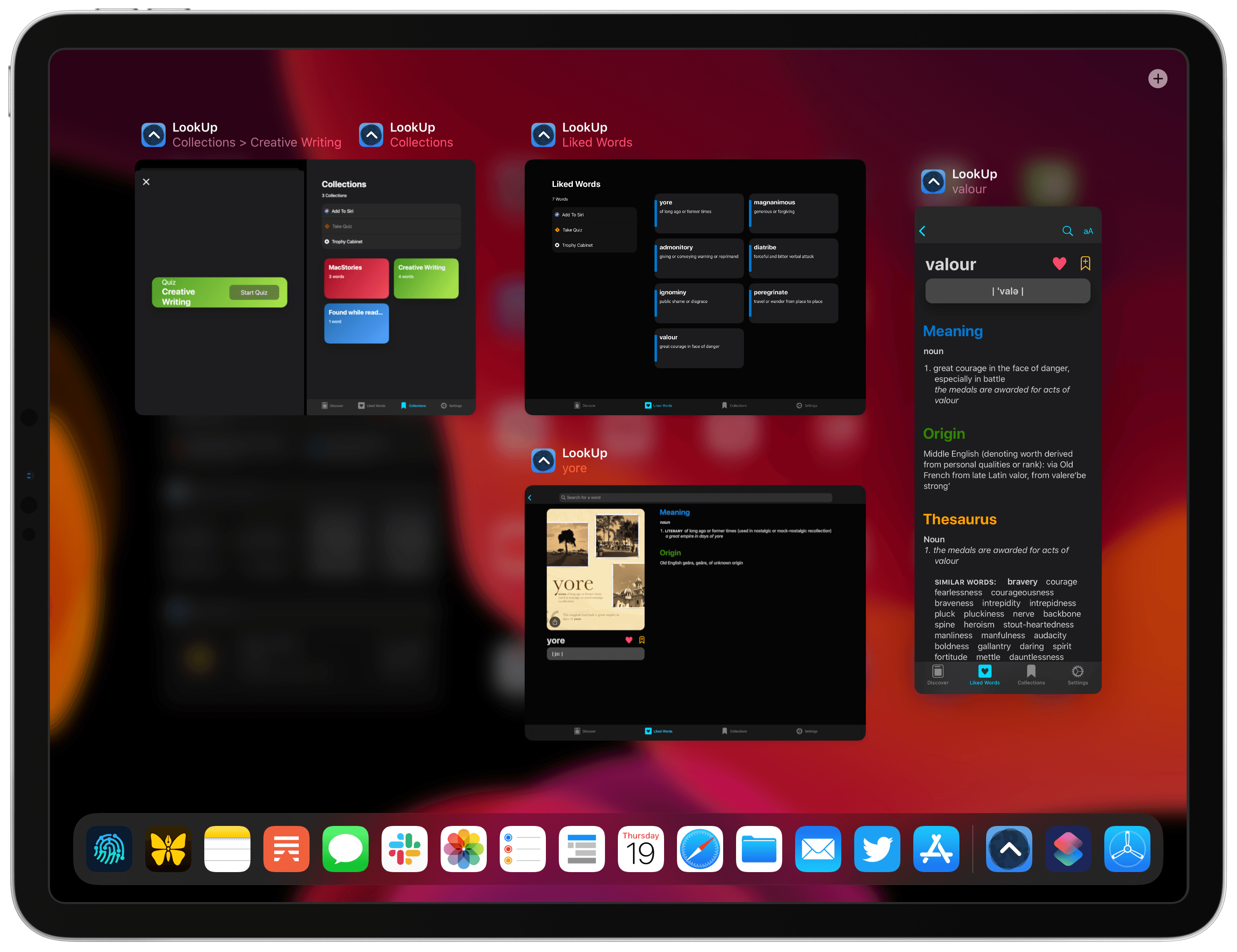 LookUp can have as many open windows as you need.

Multiwindow is a new capability of iPadOS which enables an app to spawn multiple instances of itself across different spaces; for example, with LookUp 6 you can open different collections and words as separate windows, saved across the system in Split Views, or Slide Over, or in single-app spaces. You can open additional windows in one of two primary ways: by long-pressing on a word or collection and selecting ‘Open in New Window’ from the context menu, or by simply dragging the content away and creating a new window via drag and drop; anything that can be dragged can spawn a new window. The one place that’s curiously missing multiwindow support is the Discover tab, where you can’t open LookUp’s word of the day in a new window. That strange omission aside, everything else about multiwindow in LookUp works just as I would hope.

While multiwindow on iPad requires the as-yet-unreleased iPadOS, the current iOS 13 release still offers key benefits such as a much more powerful Shortcuts framework and a new systemwide dark mode.

I’ll start with dark mode because there isn’t much that needs saying there. Previous versions of LookUp included a beautiful dark mode, and it’s here as well, but now on iOS 13 dark mode will automatically follow your device’s system setting for appearance.

LookUp also fully adopts the new Shortcuts capabilities in iOS 13. The updated Shortcuts app enables something called dynamic parameters, meaning that when you configure a shortcut there’s now a lot more flexibility in how that shortcut works. In practice what that means for LookUp is that you can configure a shortcut to fetch certain information about a given word, for instance, and at the time the shortcut runs you can have Siri or the Shortcuts app ask you what you’d like to know about the word. LookUp supports six different types of information for its ‘LookUp Words’ action in Shortcuts:

In iOS 12 shortcuts were far more rigid and not as user-friendly; if you wanted different types of information about a word, you needed to create separate shortcuts for each of those specific outputs. Now it’s extremely simple, and the way actions in the Shortcuts app are structured with natural language means it’s easy to understand what a given shortcut will do, even if you have zero prior experience with automation.

Translation. LookUp now offers a translation feature for translating English to one of almost 20 other languages, including Spanish, Chinese, German, and more. You can select one translation language at a time from the app’s Settings tab, and after you’ve done so the translation will begin appearing on a word’s detail page.

Independent Watch app. LookUp’s Watch app can now be downloaded independently of the iPhone app after you’ve updated to watchOS 6.

Action extension improvements. There’s been a small, but meaningful change to LookUp’s action extension: now you can add a word to a collection or like it right within the extension, saving you an extra trip opening the full app when there’s a word you want to keep for later.

LookUp 6 takes the best of what iOS and iPadOS 13 makes possible and employs it to great effect, and if that were all it did this would still be a solid release. But throw in quizzes, translations, and full keyboard navigation, and this update is something truly special. If you were already a LookUp user, you’re going to love this latest version; if you’re not, LookUp 6 makes a compelling case for why that should change. LookUp was already my favorite dictionary app, but now it’s taken a major step forward.