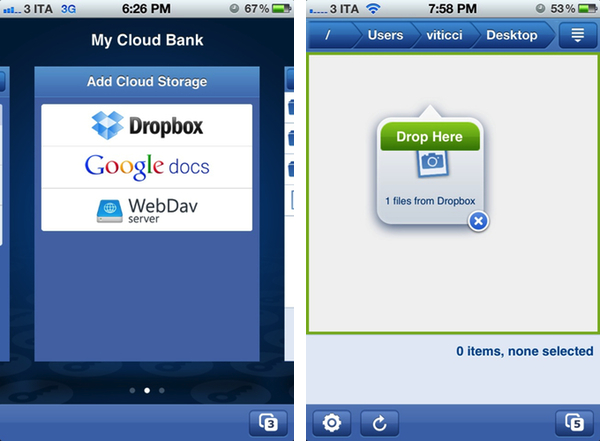 In the past months LogMeIn, makers of the Ignition app for iOS, have released a series of updates to enhance Lion compatibility on the desktop and improve the file sharing capabilities of the iOS client, which, as we detailed in our various reviews, is a great way to remotely access computers (Macs and PCs) over the air. LogMeIn Ignition isn’t the cheapest app on the App Store, but its rich set of features and support from LogMeIn (a company that, among other things, also produces a free VPN tool for OS X) make it a worthwhile purchase for those looking for a complete solution to control a computer’s screen and access to its files.

The latest version of Ignition, released today, adds a single, yet important feature called Cloud Bank that brings direct integration with Dropbox, Google Docs and any WebDAV server to the iOS app. LogMeIn Ignition was already capable of moving files between computers and iOS’ local document manager with an intuitive drag & drop menu and copy/move functionalities; nowadays, however, users are more likely to keep their documents in the cloud, rather than physically stored on a computer’s drive, and LogMeIn’s move towards integration with cloud-connected services is certainly welcome as a way to get files from the cloud and onto a computer remotely.

My Cloud Bank allows LogMeIn Ignition users the ability to take full advantage of being remote by connecting them to their files no matter where they are. We’ve extended the functionality of our File Manager feature and given users the benefit of using cloud storage services in conjunction with remote access and local file storage on their devices.

Think of Ignition as a bridge between the cloud and a remote computer. With Cloud Bank, Dropbox and Google Docs are easily accessible through Ignition’s usual interface, with the same copy menu from computer-based remote connections. You’ll be able to move files between Dropbox and a computer you’re remotely connected to, or get a spreadsheet from your Google Docs account into a computer without, say, giving the person that’s using the remote machine access to your Google credentials. With WebDAV support, users will be able to configure services like DropDAV, which turns Dropbox into a WebDAV server and works out of the box with apps like Pages and Keynote.

I look forward to seeing whether LogMeIn will ever consider adding support for iCloud files, as that seems the most logical step to seamlessly fetch an iOS user’s cloud documents. In my tests, Cloud Bank has been extremely reliable in dealing with large Dropbox transfers from the cloud to a computer I was remotely connected to via 3G.

LogMeIn Ignition is available at $29.99 on the App Store.