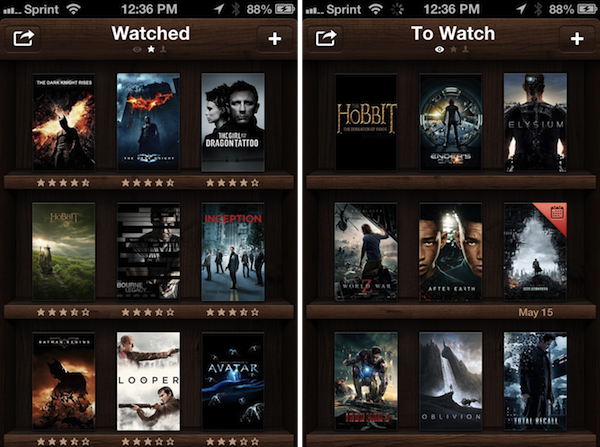 I’ve been watching more films this year, although all of them predate 2013 as I play catch up with 2012 box office hits and similarly popular movies from the past few years. But this has made a nice jumping off point for someone who’s now regularly keeping track of movies seen and unseen, helping me avoid articles from some film fanatic’s website titled, “20 best movies of ‘x’ year!” which, I’ll be frank, doesn’t help me that much.

Then there’s Limelight, a social bookcase for displaying film posters and ratings for movies you’ve seen and want to see. It’s an app that’s inherently social, meaning anyone who knows your username can follow you to discover new films and garner recommendations for their To Watch lists. Which is why I say it’s an app for discerning film lovers — for people who genuinely enjoy watching films, who want to proudly share their collections with the world. Limelight is very open – at least, it’s meant to encourage you to discover something new within its small social network. Social is mandatory.

Limelight is very much in contrast to the recently reviewed TodoMovies 2, an app in the same vein that’s currently inherently private. TodoMovies 2 is self-contained — the list of movies I’m keeping tabs on is wholly personal and in my pocket. With Limelight, my lists and those reviews are open to the public and are on the web at a mylimelig.ht URL. 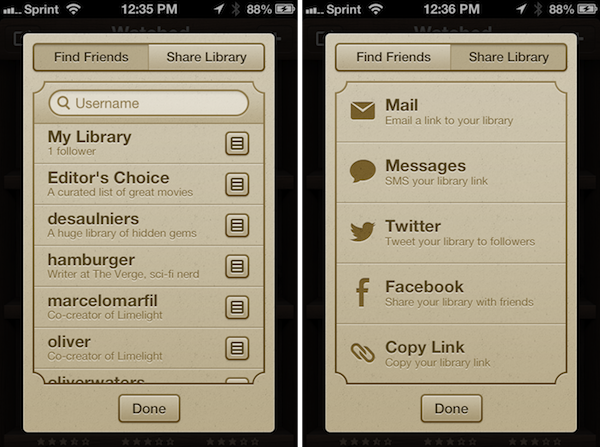 Objectively, there’s absolutely nothing wrong with that. The app is supposed to be social by design, with libraries of films shared between friends who can then discuss newly added films over brunch, on Facebook, or on Twitter. Limelight was constructed as an enabler — it’s a service through which you can keep tabs on friends and say, “You finally watched that film? And you only gave it three stars? We have to talk about it!” An ever present share menu can also invite friends to browse your collection of films from any of the popular mediums, in hopes that someone will reply with, “You should add this to your To Watch list.”

You also can’t help but love Limelight for its stunning looks alone. As I said in my review of TodoMovies 2, having an app full of colorful film posters obviously helps, but Limelight is genuinely good looking on its own merits, with wooden shelves and colorful calendars pinned on unreleased movies amongst collections of watched films and those currently in theaters. Menus, for logging in or browsing libraries, appear as beautiful beige movie tickets. The app icon is also delicious, paying homage to Apple’s Trailers with its golden badge and red curtains. 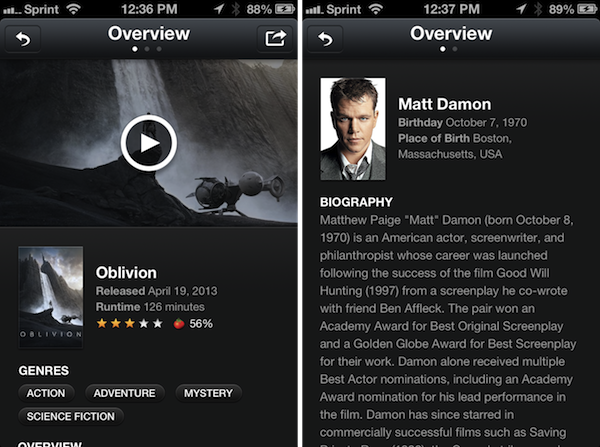 As an app for keeping tabs on movies, it’s important that I can find the movies that I want to add. For the most part, Limelight does a good job of bringing forward films that I’m probably looking for. A tap of the add button brings up a grid of genres which you can swipe left, populating the screen with Popular, Upcoming, and Now Playing categories as you peruse through basic collections. While I do question some of the top films that are currently in the Popular category, I’d say the other categories are on point. In comparison to TodoMovies 2, however, I can’t say the same for genres, with Animation being a possible exception. TodoMovies 2 does a better job of bringing up more recent and relevant films in its genres, but I digress. For search, Limelight does a good job of finding movies by title, but I’d also like to see a list of movies appear when searching by cast or studio.

Limelight does make it easy to find films to watch, thanks in part to quick overviews, a handy consensus to set your expectations accordingly, and a nearby Rotten Tomatoes score. Tapping on a movie brings up these details and a film trailer, though they only play in landscape (which is fine). Swiping left gives you a list of cast members and similar films, which I can say are quite well done. Something I appreciate is the ability to tap on an actress or actor and see which movies they star in, aiding in finding films to pluck out for the To Watch list.

Pro tip: Anywhere you see a movie in Limelight, you can tap and hold it to bring up a menu so that you can add the film to a list or share it with friends.

Limelight is like a mini Letterboxd in many ways, shedding written reviews in favor of a simple star scale and absent of pro plans, tags, and lists. It’s decidedly simple, pleasant in all of the right ways with delightful details and smart collections of films from people you might know under Find Friends. Which brings me back to my opening complaint about finding something to watch — Limelight is tailored to helping you do just that by saying, “Go look at what your friends are watching.”

This Spring has been kind to movie lovers, with Limelight trailing the release of TodoMovies 2 by just a month. Where TodoMovies 2 is for the introvert, perhaps Limelight is for the extrovert, as both apps similarly want to aid in shelving the movies you’ve seen while helping you remember stuff that you want to see. At this point, it’s just a matter of how socially inclined you are and what kind of experience you’re looking for. That’s not to say TodoMovies 2 won’t possibly add some social interaction if Letterboxd opens up their API, but I imagine that would be optional.

Limelight is smart, social, beautiful, only a dollar, and a clear result of hard work from the newly founded 9:42am. You can download Limelight for the iPhone on the App Store.