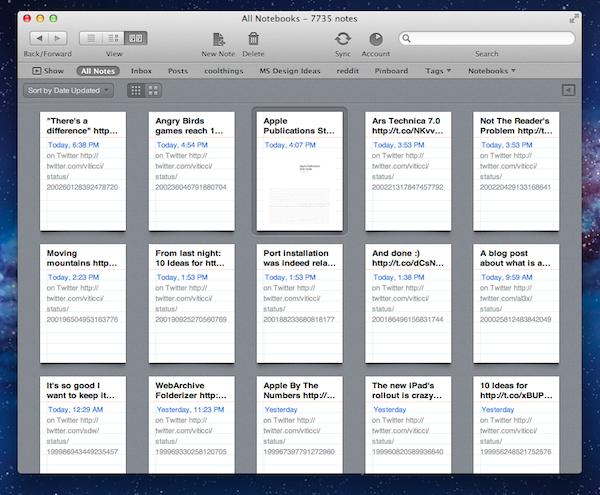 Yesterday, Evernote rolled out two major updates for its iOS and Mac apps. As a daily Evernote user who relies on the app to research posts, save PDFs, annotate images, and generally archive just about anything through IFTTT, I was pleased to see the improvements made in these versions are taking Evernote into a direction I like.

First, the iOS app. Focused on iOS 5 and the iPhone version, Evernote 4.2 brings a more accessible way of applying rich text and switching between editing and composing. Prior to version 4.2, users had to select text and hit a button in the top toolbar to bring up rich text editing – a process that was cumbersome and not as responsive and stable as one would expect from a top-notch iOS app. Evernote 4.2 abandons the separate text editing workflow and interface for a better, more integrated way of displaying text controls alongside the system’s keyboard. A new button will now let you easily switch between typing and editing, while retaining the same options that made Evernote a must-have among note-takers looking for rich text support. I like how selected text will remain selected if you switch between the keyboard and text formatting panel; surprisingly, however, Evernote still hasn’t managed to fit a Cancel button into the note editing screen. 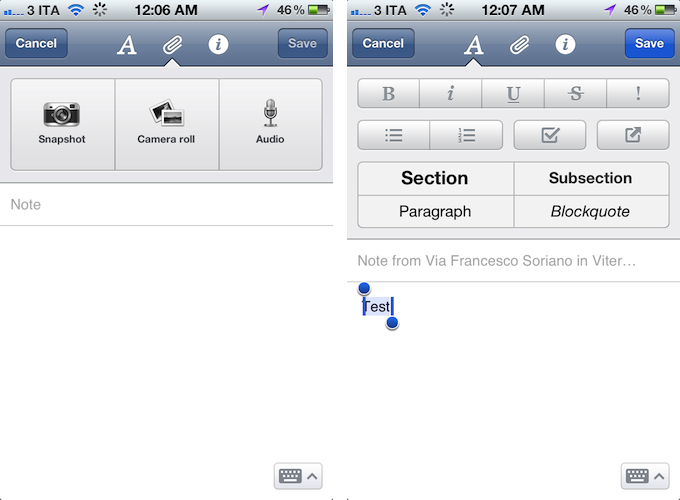 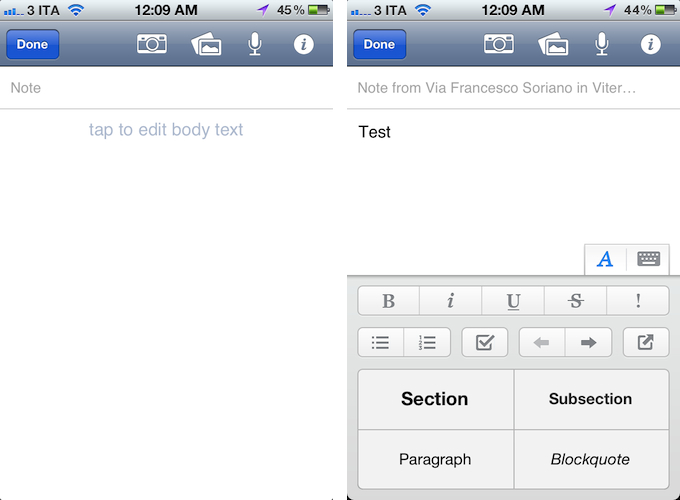 In this new version, Evernote claims they made the app’s note taking capabilities “more powerful”, and, in real-life usage, I can attest this change is reflected in faster performances, generally more reliable edits synced to Evernote’s servers, and decent support for checklists and bulleted lists. Often, previous versions of the app would let typing “slow down” as the software was syncing changes back as you typed; it was a strange effect, and I saw it happening a lot especially on the iPhone and iPad. The glitch seems to be gone from Evernote 4.2, which I found to be smoother and more responsive at accepting text input and applying changes.

I don’t use checklists in Evernote – I very much prefer TaskAgent and Dropbox for that – but it’s nice to see the company implemented a solution to add checkboxes with new lines automatically. Checkboxes can now also be indented, though I’m not a fan of the manual process required to do so. As for bulleted lists, which I use on a regular basis for MacStories articles, v4.2 doesn’t add new bullets with new lines – a bug that annoyed me to no end is finally gone from Evernote (both on iPhone and iPad, as this post written from Evernote on iPad last night seems to confirm).

The new Evernote for iPhone puts great emphasis on the redesigned attachments bar at the top. The updated placement of buttons (camera, images, audio, info) should make it easier to attach files to notes, and check out detailed information in the (also redesigned) Note info screen. The audio recording interface has been redesigned: as you tap the microphone icon in the toolbar, an audio recorder will gracefully come up on screen, displaying elapsed time, volume changes, and a “Done” button to save your recording. Surprisingly, there is no Cancel option here either, so once saved, audio attachments will have to be manually removed with the keyboard (they can also be played inline within a note). As for image attachments, Evernote now lets you import photos from the Photo Stream system album, and it gives you an option to prevent snapshots taken in-app from being saved into the Camera Roll.

The 4.2 update to Evernote for iOS takes the iPhone app into the right direction for note-taking, whether it’s rich text, media, plain text, or a combination of all of them. There are still some glaring omissions – such as Cancel buttons – and Markdown-oriented note takers might still prefer a more classic approach with Dropbox-enabled apps, but I believe the improvements brought to the iPhone make for a really solid mobile note taking app. Where I do believe Evernote still needs to make serious improvements, though, is the iPad version of the iOS client. With the exception of Cards view and rich text, the core of the app is virtually unchanged since the first version, and it’s beginning to show its age especially when compared to text editing software like Writing Kit. The lack of real full-screen editing is distracting, the app doesn’t take advantage of gestures to enhance navigation between notes and notebooks, and, overall, managing a stack of multiple notes and tags feels clunky. I look forward to Evernote making important changes to its iPad app; I also hope the company is working on a new method to quickly capture text on iPhone, as Drafts showed a better way to effortlessly save text is possible.

On the other hand, Evernote for Mac keeps getting better on each release, adding new features, refinements, and fixes aimed at improving users’ workflows for getting data in and out of Evernote. One of the biggest criticisms Evernote faces, in fact, is the way its puts data into a single database that doesn’t allow for simple exporting options to get your content out of Evernote’s “closed” system. Data ownership is a fundamental right in today’s connected age, and fortunately the Evernote team has been making changes to address the complaints of those willing to let their documents free.

Evernote 3.1 for Mac comes with a new “Save all attachments” option that takes all attachments from one or multiple notes, and exports them to the Finder as single files. You can select multiple notes containing images and export all those images to the Desktop; you can select notes containing audio, PDFs, and images (which I did), hit Save, and find the respective files in your preferred Finder location. The new UI to manage multiple notes is very attractive, with additional options to merge notes, move them to another notebook, email them, and tag them. 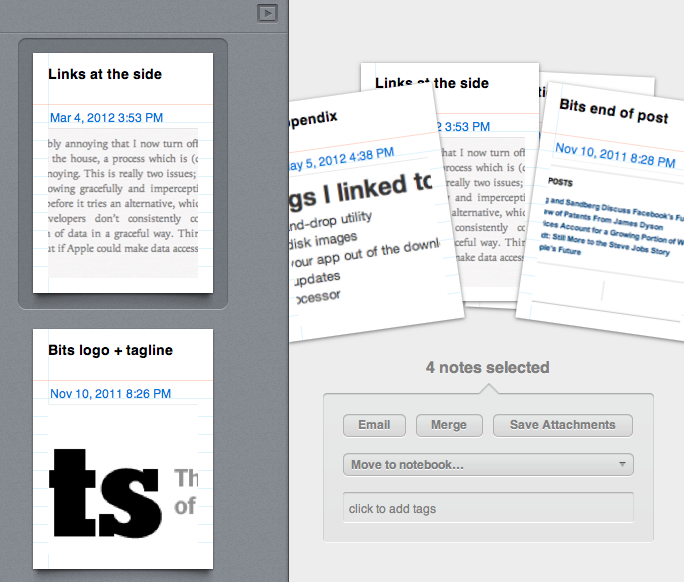 The “Save all attachments” feature works nicely with the new Cards view of Evernote 3.1. Inspired by iPad, Cards view provides a new take on thumbnails (two sizes are available) with large previews that show the first line of a note and possible embedded images. Cards can be sorted and grouped through a menu in the upper left corner; by hiding the Account sidebar listing your notebooks, tags, and saved searches, you can turn Cards into a beautiful, non-full screen visual mosaic of your notes that, especially for image-heavy notebooks, makes for quicker and more intuitive browsing. For instance, I have a “MS Design Ideas” notebook full of screenshots and ideas for the next redesign of our site, and Cards view allows me to quickly run through my “notes” by combining the convenience of snippets view (only bigger) with more thumbnails while not in full-screen mode.

Cards view also comes with a split interface that combines browsing and editing in a single window. I like how text automatically wraps inside the right panel, and I think this editing mode would be perfect on the iPad with a browser view displayed on the left  as it would make for a great blogging environment (I often need to quote or reference web pages while writing in Evernote). In general, even if not necessarily web views, I do hope Evernote is considering turning this updated “split mode” into something more powerful.

Evernote 3.1 has some other interesting improvements in the area of note taking: there are new keyboard shortcuts to quickly enter the current date and time, and the app finally displays word and character counts inside a popover menu (also accessible with a keyboard shortcut). HTML output seems to be improved as well, as in my tests, rich text written in Evernote was successfully pasted into the WordPress visual editor without visible errors or inconsistencies.

Yesterday, I wrote that Evernote needs to build a solid foundation of connected apps now. While waiting for the company to come up with better ways to integrate their recent acquisitions into the Evernote ecosystem, I appreciate the changes made to the official clients in order to future-proof them even just a little more. Text editing keeps on getting better, and the improvements made to the data exporting features confirm Evernote cares about letting its users get information out of the “anything bucket” and into other sources.

As I mentioned above, I look forward to seeing the iPad app getting a major overhaul in terms of note management and navigation; in the meantime, you can find the updated Evernote apps on the App Store, or on Evernote’s website.