We’ve been reviewing a lot of web applications on MacStories during these last weeks, and not because we haven’t been able to find new “native” apps both for Mac and iPhone - because we believe today’s webapps have a lot to teach to desktop applications. Also, many of us use websites as desktop applications running inside an instance of Fluid.app: I have 3 Fluid apps sitting in my dock at the time of writing this post.

We usually focus on applications that could empower our productivity workflows with new tools, new ways of doing the old stuff, possibly standard compliant. Just take a look at Zootool, HipChat, Nirvana: they’re all great pieces of software that, no matter they’re written in Cocoa or not can run on our Macs just fine - and they’re useful.

The webapp Cody and I are going to talk about today is something you haven’t seen before anywhere else. It’s a sort of online storage / virtual desktop /collaboration app that presents a nice interface and runs very smoothly. An online place for you, your family and your co-workers that could seriously become one of your 2010 new favorite apps.

My workflow mainly consists of working on my MacBook Pro with documents, mails and archives, being active 24/7 on Twitter and browse a lot with Safari (actually, it’s a nightly build of Webkit). I write a lot, spend a lot of time in Mail.app, spend an awful lot of time organizing tasks in Things / Omnifocus. Also, I have to share many files with the people behind MacStories, my family, my girlfriend. “Can you send me that PDF you mentioned at dinner last night?” Sure, what’s your email address dude. “I’d need access to some of your documents, have to check some accounting stuff you don’t wanna mess with. Leave it to me.” Sure, let me put everything on my Dropbox. There’s no doubt that this could be better. Way better, if you consider I’ve only mentioned two aspects of the things I have to do to keep up with people’s needs. I’ve thought many times about an application that could collect in one single and convenient place online file storage, a chat, a todo list, notes and anything else but eventually I realized that would be impossible.

Kohive is pretty much the result of the “dream application” I was thinking about: it’s a place where you get productive and collaborate with people. I could sum it up saying it’s an online desktop that provides a set of 10 applications (or features) that allow you to manage tasks, upload files, doodle and a lot of other things.

Once you’ve signed up for an account and logged in, you’ll be presented with a blank desktop, a “dock” on the left and the possibility to create “hives”. A hive is basically a workspace, you can create multilple hives basing on what you need to do. They are located at the bottom of the screen as tabs. For example, I’ve created a MacStories Hive and a Personal one in order to organize better my stuff whether it belongs to work or not. Being a hive nothing but a desktop, you can change the theme colors (including the top bar) and start the “applications” much like you would do on your desktop computer. The main concept behind Kohive, indeed, is that you have this online space which you can modify according to your needs, add and remove applications from the settings, invite the people you want. 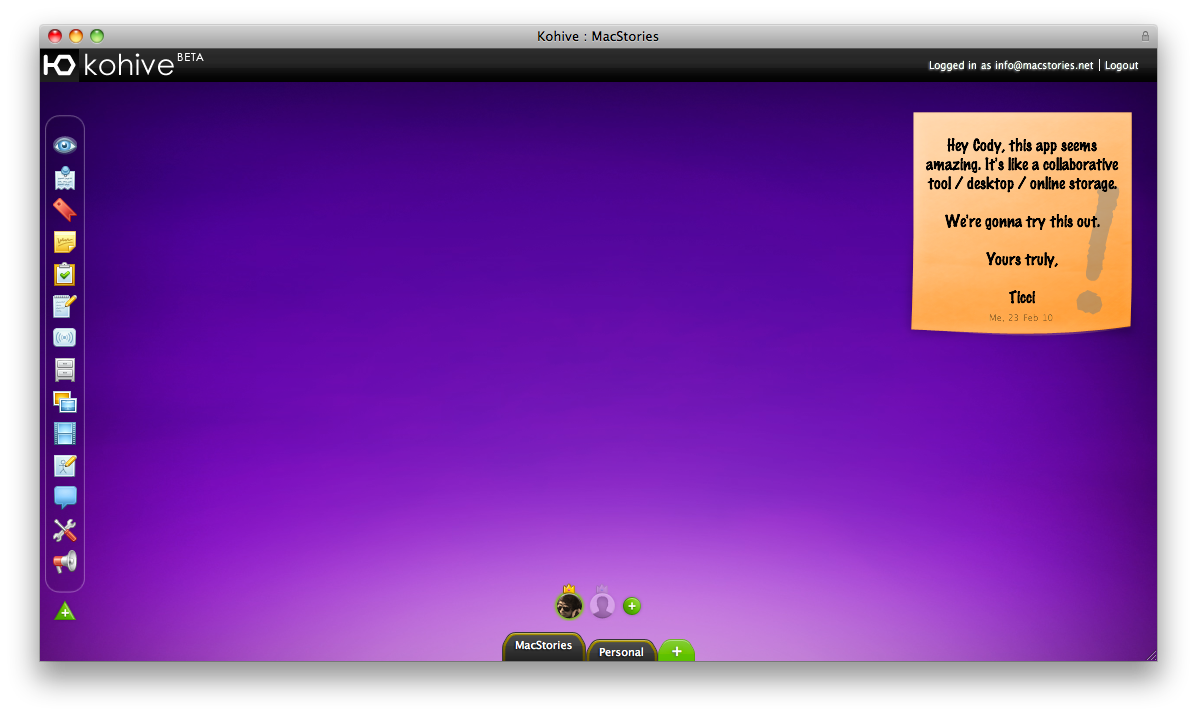 “A freelancer could create hives to share and communicate with his team and clients. He’d create another hive to talk to his family, share photos and recipes. And another to share and talk to his closest friends. It’s that range of uses that makes the platform so effective.”

As you can see from the screenshots, I invited Cody to join me to test Kohive; each participant (including the administrator of the account) has a profile card that can be filled with name, nickname, job title, location, email and website. But you can also add a lot of other stuff like AIM contacts, a profile picture, twitter account, political views, favorite topics and movies and a mini bio. Kohive really focuses on people rather “users” - it’s a very personal approach. 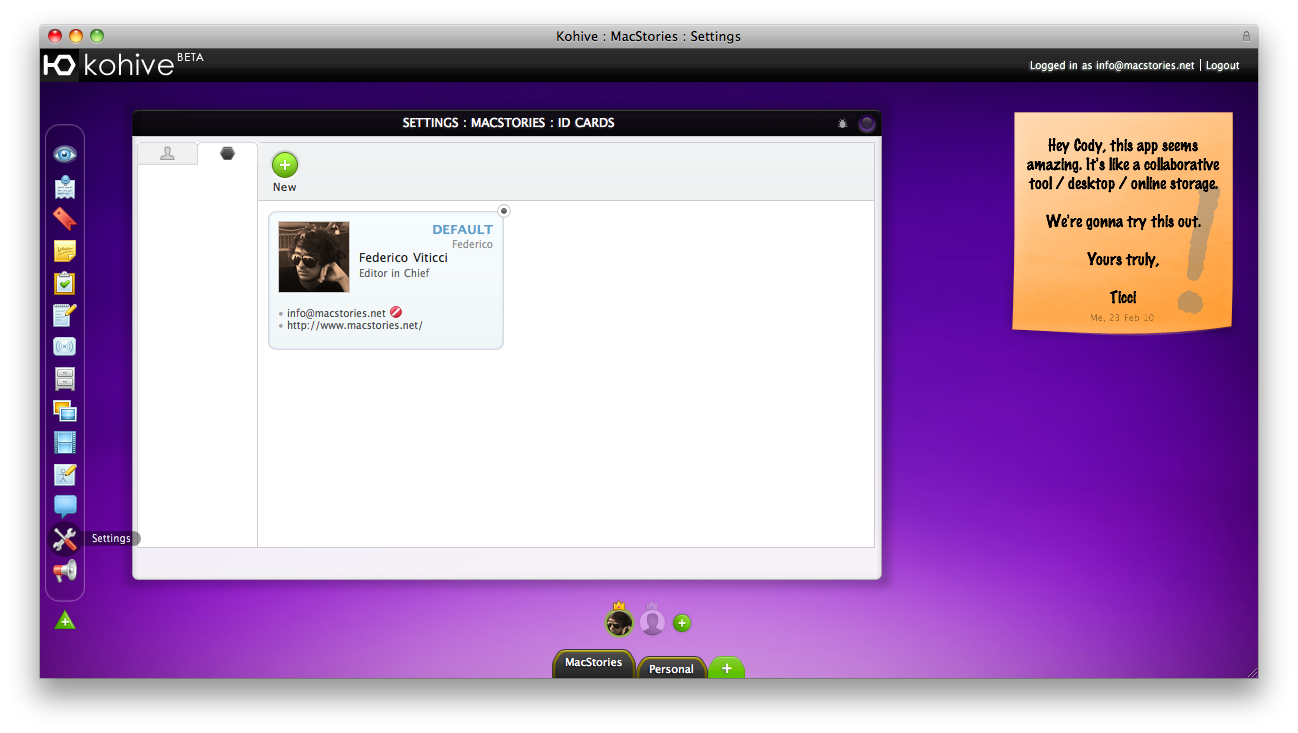 Before talking about all the features that Kohive offers, let me state straight up that the whole thing runs quite smooth, even if the application requires some good bandwith to support all the animations, effects and stuff it offers; Cody told me it was a little bit buggy to him, but I haven’t had any sort of problems here. Guess it’s because of servers latency, God knows. Also, Kohive is built using the ExtJS framework - which is just great.

Despite the platform being good and well optimized, it obviously doesn’t behave like you would expect from a desktop OS. First, you can move windows around, but you can’t resize just like you want, as there’s a minimal size to respect. You can drag windows around, but as you start holding the mouse on a window’s titlebar the entire content of the same window disappears to let you drag it around. Very weird. But all in all, I consider Kohive a success as it does right what many other apps failed at, and that’s a good achievement so far. 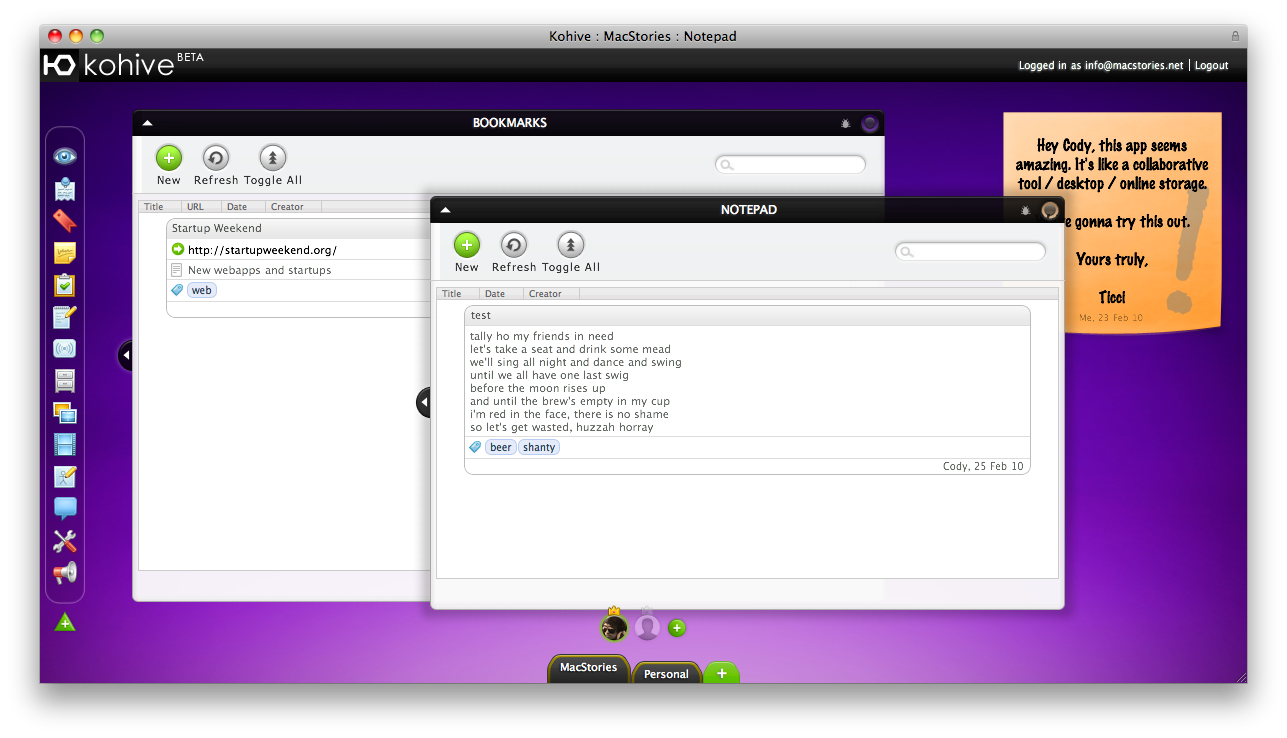 The applications, mostly project management tools, are located in the left dock and can be hidden from the Settings (also another app in the dock). The first one you’d probably check out is the Overiew which is very akin to ActiveCollab and Basecamp overview page: it shows all the things that happened since you last logged out. It’s cool, things are clickable, the design is clean. While we’re on it, let me mention that Kohive has a very nice overall clean design: icons are colorful and crisp, windows are polished and well laid out, it’s very easy to click, click, click and get things done. 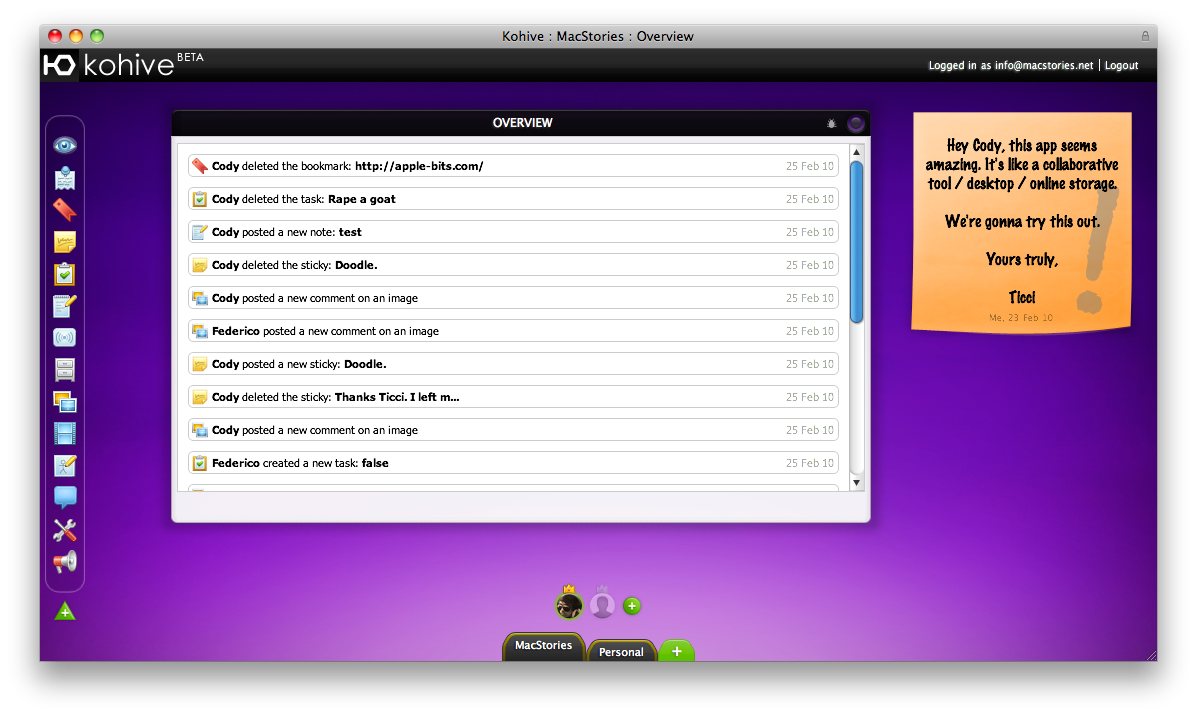 “Kohive is to current collaboration sites what the iPhone was to previous generation phones. It offers a superior user experience and an expandable service where custom applications can be installed. What you see now is really only the start - we’re working on lots of great apps and features that will be coming over the next few months - the Kohive roadmap is exciting for both users and developers”

You can actually do a lot of stuff with the apps in the dock. You can leave messages, create stickies and drag them onto the desktop, upload files in the File Cabinet, doodle, upload pictures from your computer / URL / flickr, leave status updates ( and even sync with Twitter), write notes and create tasks. It’s a streamlined collaboration app with nice addictions like messages and status updates meant for using Kohive with a less exigent userbase like, say, your family. I honestly don’t see why an app like this couldn’t be used in a non-professional context as well, given the presence of utilities like Stickies and the aforementioned clean and usable design.

I told you Cody tested the app with me. You’d better check out his impressions as well.

Kohive is interesting, because it takes elements of a traditional collaboration tool like ActiveCollab, but mimicks it on a simulated desktop environment. It’s kind of strange working this way, since you’re basically working on a desktop in a desktop. I don’t know if I like this approach, because while you can run multiple apps (your project management tools) at the same time and organize them on screen, I feel like I’m working with another computer and not a program. I suppose my opinion of this varies greatly, as some people really love the desktop model. I’m 50/50 on it, but overall I’m pretty impressed with its capabilities.

The draw is this ability to seamlessly switch between active content on screen, without having to navigate into various sub menus and reloading the page. What I do like about this model is that I can seamless chat with my collaborators (in this case, Federico), work on a note, add and complete tasks, and leave messages for other users about project updates. I really like not having to fuddle with menus.

Managing content with other users is pretty simple - simply click on the icon of the utility you want to use, and from inside the utility you can establish your settings for whatever you’re doing. For example if you’re working with tasks, you can manage things like dates and your priority items. You can also see responses and updates made by other users.

One feature I thought was pretty handy is sticky notes. Like when mom left you a note on the refrigerator to read before or after school, you can leave messages for users coming into to the hive. Kohive encourages collaboration and communication, and makes it easy to do so. With a few clicks or drag and drop finesse.

Kohive is one of those applications you don’t think it would ever be possible to develop, but it is. The application is young, it’s promising and I expect a very bright future for it. It might turn out in being the ultimate tool for people who want versatility but still power and reliability in an online collaboration tool. Also, Growl integration for a Mac OS X Fluid app and a native iPhone app are in the works.

You can take a look at the pricing plans here. A free plan is included, with 0.5GB of space. Last, you can use the “macstories” coupon code to get a 30% off all the plans, annual ones as well.

I think you should seriously consider trying Kohive, it could be the missing piece in your workflow.