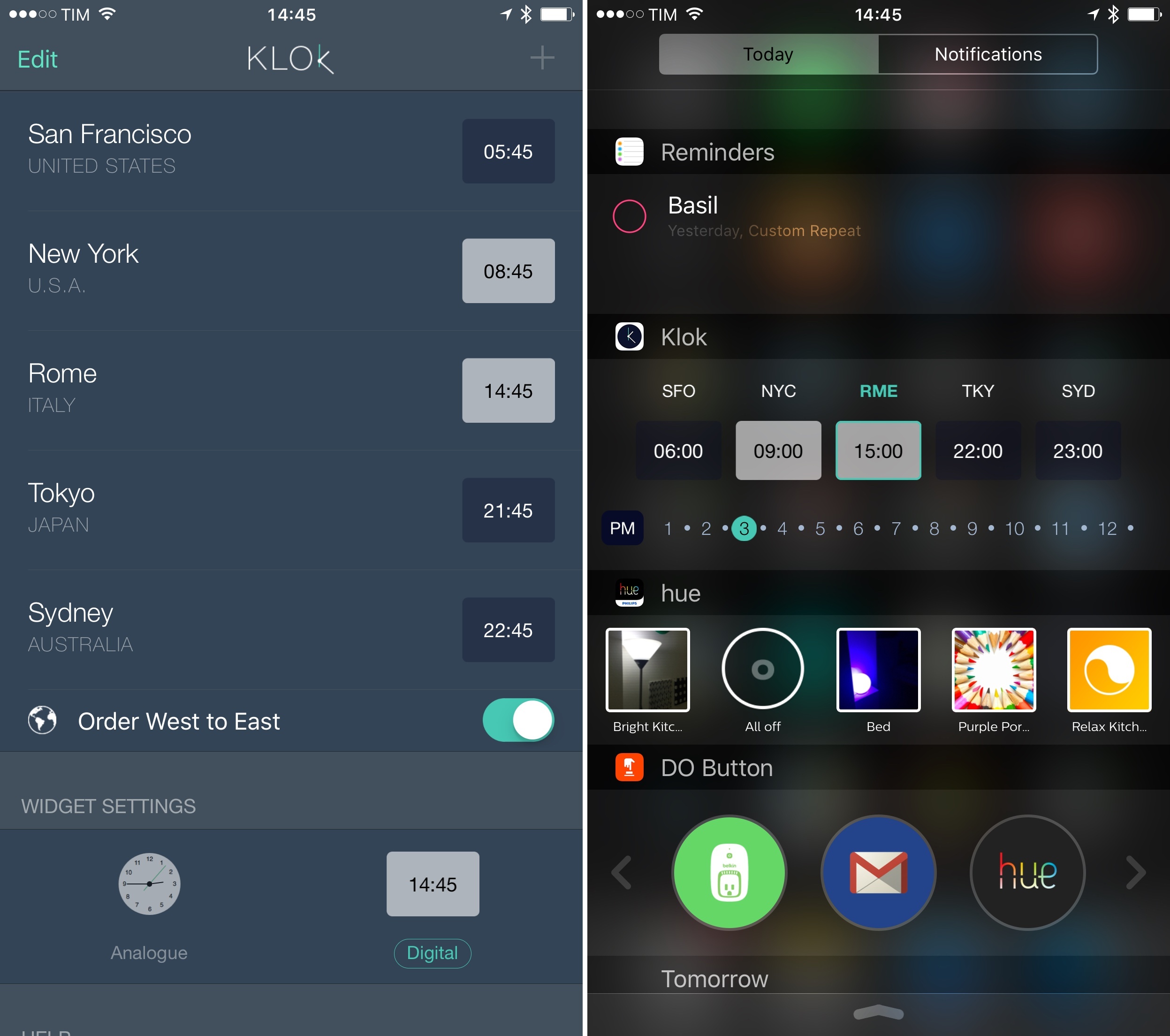 Developed by buUuk, Klok isn’t the first iPhone app to make different time zones available from a Notification Center widget. However, unlike similar apps I’ve used before, Klok allows for basic interactions in the widget, which can be useful when comparing different times at a glance without having to calculate differences between them.

In the Klok app, you can search for locations and add them to the list of cities that will show up in the widget. You can’t create subgroups of cities for different occasions – every location will be added to the Klok widget. There are two settings you can activate to modify how time zones are displayed in the widget: you can order from West to East – useful if you like to think of time zones in geographical terms as I do – and you can show digital times instead of analog(ue) for increased precision and glanceability.

The widget is where you’ll mostly interact with Klok, and in my period of testing it has become a fixture of my Notification Center as it lets me compare different times from anywhere on iOS without having to open an app. Once configured, the Klok widget displays a row of cities with abbreviations instead of full location names – this is a good choice as it enables the widget to show multiple cities on a single, compact row. Klok highlights locations between 8 AM and 6 PM in white, as it assumes those are the best times to contact someone who lives in a different time zone. While I understand the motivation behind this, I wish these times were configurable as everyone has a different schedule. For instance, it may be okay for me to contact someone who lives in NYC at 11 PM because I know they’re always available at that time.

The best aspect of Klok’s interactive widget is that you can tap a city to start a manual comparison mode by moving time backwards and forwards to see what a specific time corresponds to in a different location. When you do, the selected city is highlighted in light blue and the widget displays a time bar at the bottom to switch between AM and PM; you can also tap any hour and half-hour increment of the day to “time travel” and see how other time zones change in relation to that. This has been useful, for example, to see that 5 PM in Rome corresponds to the following day at 1 AM in Sydney – when that happens, a city that has rolled over to the next day gets a “+1” badge (same for the previous day with a negative badge). You can dismiss time travel by tapping the selected location again, and you can also tap & hold a location to copy the current/converted time to the clipboard.

Klok is, overall, a handy time zone converter widget that gets the job done. Unlike other time zone apps, options and visual modifications are kept to a minimum, resulting in a good set-up-once-and-go experience that, however, offers a convenient time travel feature by simply tapping the widget. Klok is free on the App Store, and worth a look.