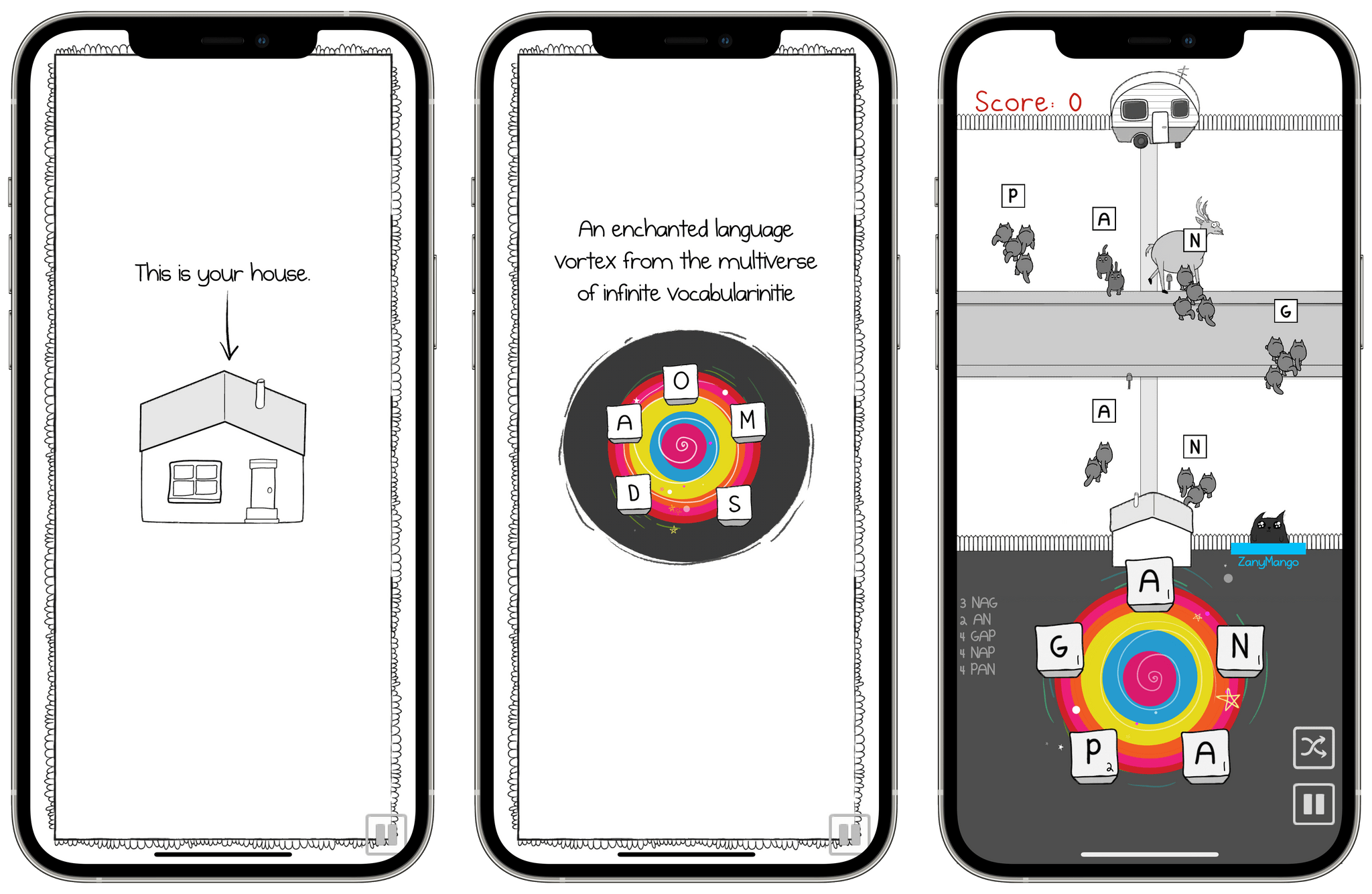 It’s always a good sign when the hardest part of writing a game review is putting the game down. That has absolutely been the case with Kitty Letter, the new word game from Matthew Inman, the artist behind The Oatmeal webcomic. The core mechanic is familiar: make as many words as possible from a handful of jumbled letters. But as with many of my favorite iOS games, Kitty Letter takes a classic genre and adds a twist.

Inman’s twist reminds me of another classic iOS genre: tower defense games. As you create words by swiping across the letters that appear in a mysterious language vortex, armies of exploding cats are launched, countering other cats bent on destroying your home and attacking the crazy cat man who lives in a trailer across the street. Add collectible power-ups, a funny storyline, The Oatmeal’s signature humor and art, and multiple game modes, and Kitty Letter is completely absorbing. The game is perfect for one-handed mobile play and theoretically short sessions because no single level takes that long to play, but that’s only the case if you actually manage to peel yourself away from it.

Kitty Letter can be played in single or multiplayer modes, each of which has two ways to play. In single-player story mode, battles are interspersed with a storyline that I won’t spoil, but which includes elements like a fish you have to slap repeatedly to defrost and groaning deer. I’ve played through the first set of levels, and the story adds depth to single-player mode, which lacks the competitive dimension of multiplayer mode. The other single-player mode is an arcade mode, where the goal is to survive as long as you can, racking up points as you are relentlessly attacked by waves of exploding cats that come at you faster and faster as you play. 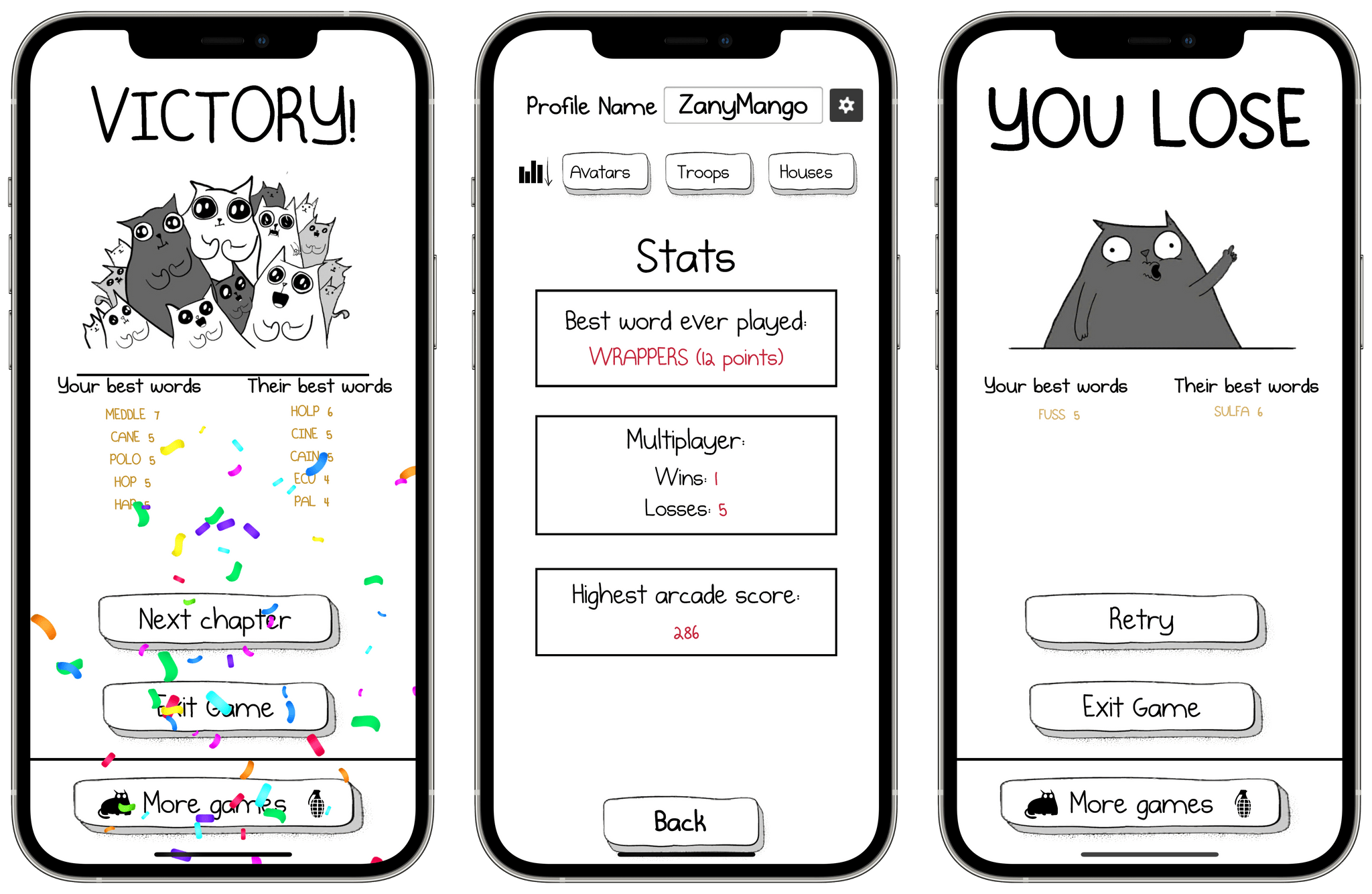 In multiplayer mode, you can play head-to-head against a friend or against a stranger. I played several matches against strangers and only won a couple of times. Kitty Letter has only been out a few days, but there are already some terrific players. What makes multiplayer mode difficult, absorbing, and incredibly fun is that, like Arcade mode, it’s critical to maintain a quick (but not too quick) pace and be good at coming up with lots of words. You can try to slow down a little to see what your opponent throws at you, but if you slow down too much, your letters reset. If you play fast, you may overwhelm your foe, but you also might run out of words too quickly and have to wait for new letters, helpless against an onslaught of cats.

In both modes, the game mechanics are roughly the same. Build words from the letters launching cats that counter incoming armies and hit back at your enemy to inflict damage (or win points in arcade mode) when your cats make it through your enemy’s defenses. The longer the words you put together, the bigger the cat armies you generate are. Timing counts, too, because incoming groups of cats can only be countered by making a word that starts with the letter that appears above the group of enemy felines. As you and your opponent are hit by incoming cats, your health meter tracks the damage you each take. Whoever’s health runs out first loses.

Kitty Letter is available on the iPhone, iPad, and M1 Macs, but it’s best on the iPhone, where you can quickly swipe across letters to make words one-handed with your thumb. The game includes a stats page that keeps track of your highest scoring word, wins and losses in multiplayer mode, and your highest arcade mode score. Kitty Litter is free and has no ads, other limitations, or gimmicks to entice you to spend money. Instead, there are a variety of avatars, cats, and houses that you can buy as In-App Purchases, but they are purely cosmetic and don’t affect the game.

It’s been a while since I found a casual iOS game that is this fun and distracting. Kitty Letter silly, challenging, and addicting, which is the perfect formula for fun.