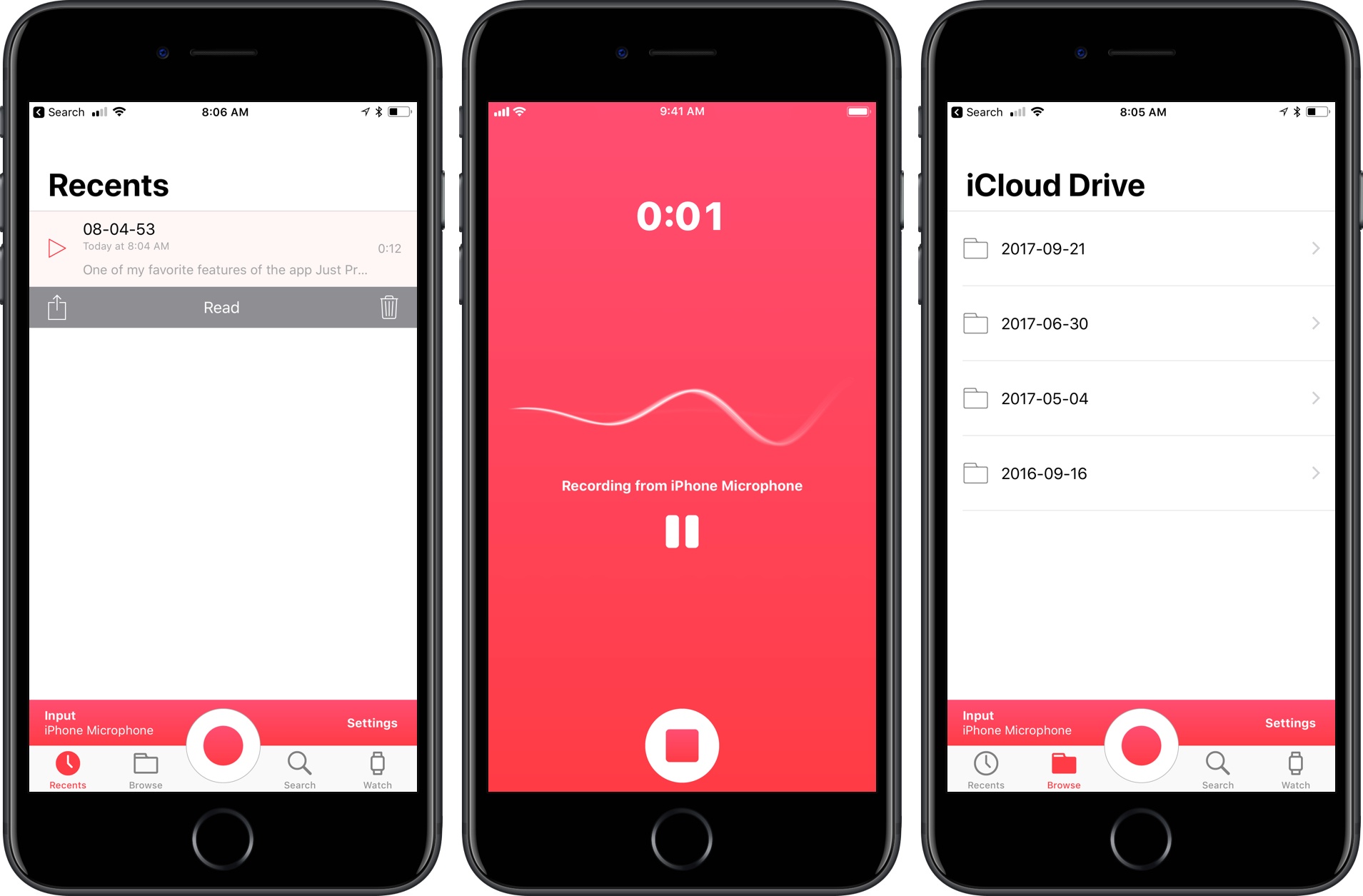 My favorite way to make quick recordings on my iPhone is Just Press Record. It’s a great way to capture a thought before it escapes me. With the release of iOS 11 and watchOS 4, the app launched an update with a modern design and more powerful watchOS app that makes it even easier to use.

Just Press Record’s iOS app has been updated with the look and feel of system apps like Music and Messages. The app features bold titles at the top of each section, which are accessed from the four tabs along the bottom of the screen. As in past versions, starting a new recording is fast and simple with the big record button that sits in the center of the tab bar and extends up into a secondary bar that has buttons for changing the microphone input and accessing settings. Just Press Record defaults to your iOS device’s internal microphone for recordings but can be switched to the AirPods microphone or an external mic if either is connected to your iOS device. 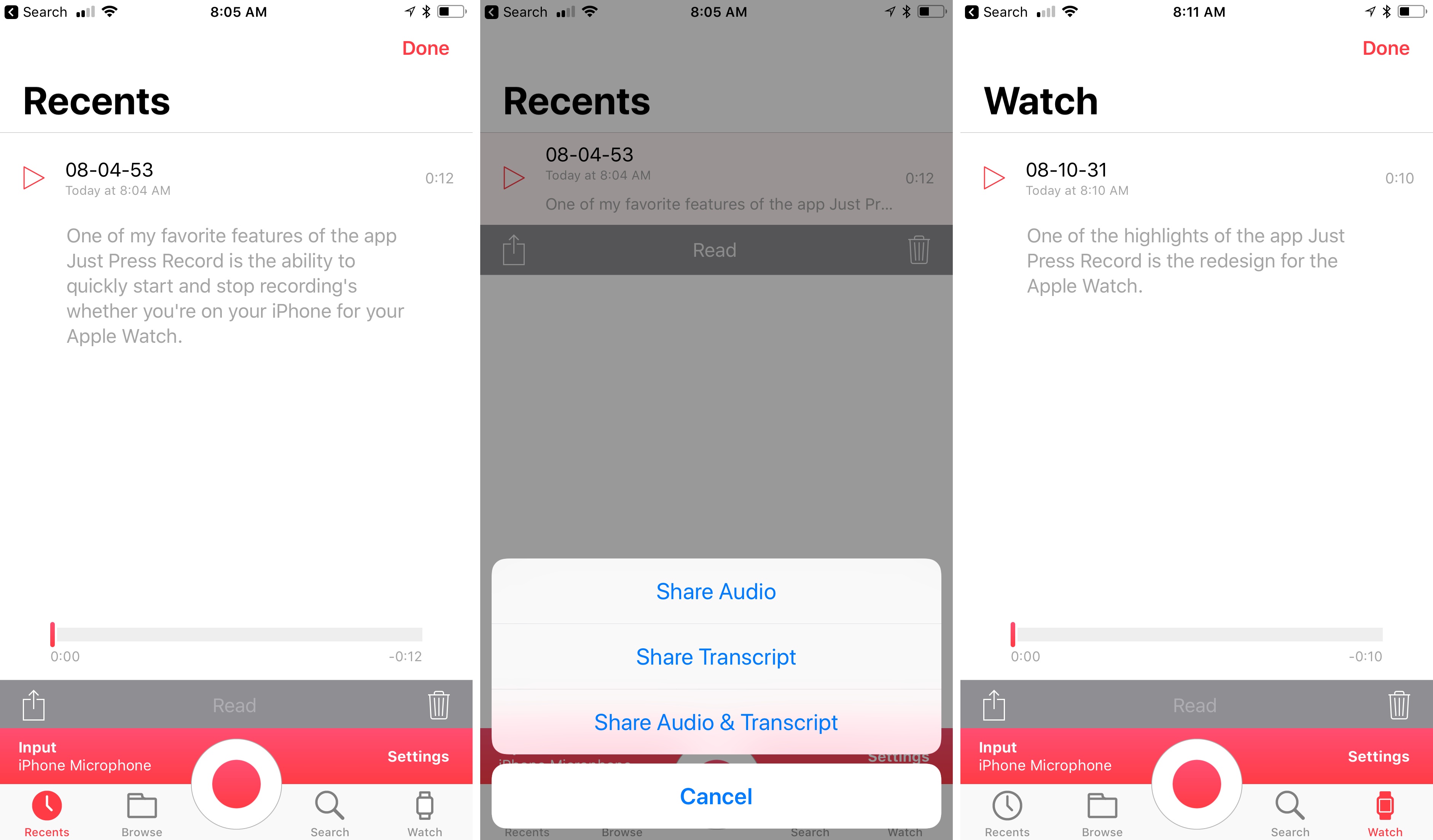 When you stop recording, the sound file shows up under the Recents tab with a timestamp title that can be changed and a preview of a transcription of your recording if you have that feature turned on in settings. For short recordings, transcription, which supports over 30 languages, is fast. The Browse tab lists all your recordings that you’ve made by date. Tapping on a date opens a view with all the recordings made that day. The Search tab returns results based on the recording’s title or transcript, which is another good reason to transcribe your recordings. Finally, the app has a dedicated tab for accessing Apple Watch recordings.

I haven’t used Just Press Record’s watchOS app much in the past. The latest version has piqued my interest though. Tap once to start recording and again to stop. You can also start a recording from the app’s complication. Swiping down pauses a recording, and you can listen back on AirPods or over the Apple Watch’s speaker using the Digital Crown to adjust the volume.

With watchOS 4, Just Press Record can record in the background for the first time. Previously, if a notification came in while you were recording, Just Press Record would be sent to the background and the recording terminated. Eliminating that constraint alone makes the watchOS app much more versatile. Recordings are sent back to your iOS device automatically for transcription and syncing with iCloud Drive. The interface has also been redesigned to fit better with the overall look and feel of the iOS version of the app.

I think of tasks I have to complete or ideas for articles or products at times when it’s not convenient to type. Just Press Record is perfect for those occasions because it’s easy to start a recording quickly with very little interaction whether that’s on my Apple Watch, from the iOS app’s widget, or in the app itself. With transcription on, I can set a reminder for myself to periodically go through my recordings and capture those ideas in a task manager or other appropriate place. Not only does the process capture those thoughts, so they aren’t lost, but it also takes a load off of my mind because I’m not trying to remember whatever it was that occurred to me earlier in the day, which is a very welcome feeling.

Just Press Record is available in the App Store.