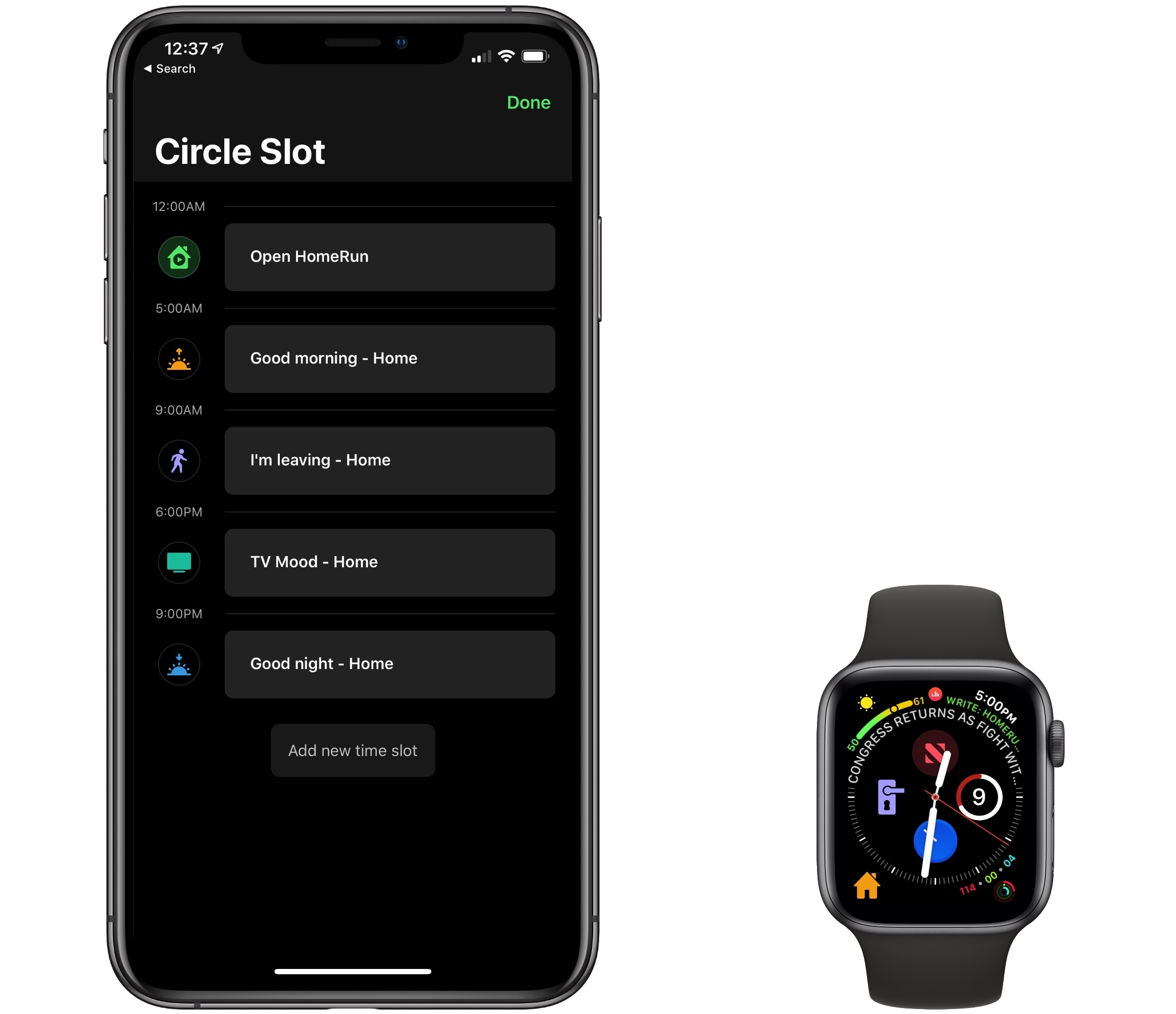 HomeRun 1.2 was released today from developer Aaron Pearce, the latest evolution of the Apple Watch app for controlling HomeKit scenes from your wrist. Its last big update introduced the ability to create custom complications on the Watch, which was a fantastic addition because it enabled users to implement the complications that work best for them personally. Today’s update extends the theme of user customization and programmability, but takes it to a whole new level – exceeding anything I’ve seen from another Watch app before now.

Version 1.2 of HomeRun revolves around one main feature – daily routines – which takes a couple different forms. In each manifestation, however, daily routines equip users to program which actions the app surfaces on their wrist during the course of a normal day.

First, HomeRun now provides the option to set different complications to appear on your watch face throughout the day during select time periods. You can, for example, tell HomeRun that starting at 6:00am every day, you want its complication to trigger your ‘Good Morning’ scene, then at 8:00am it should instead trigger your ‘I’m leaving’ scene, and at 5:00pm it should change to activate ‘I’m home’. Not only will the action change, but the complication itself will visually transform at the time you’ve programmed. 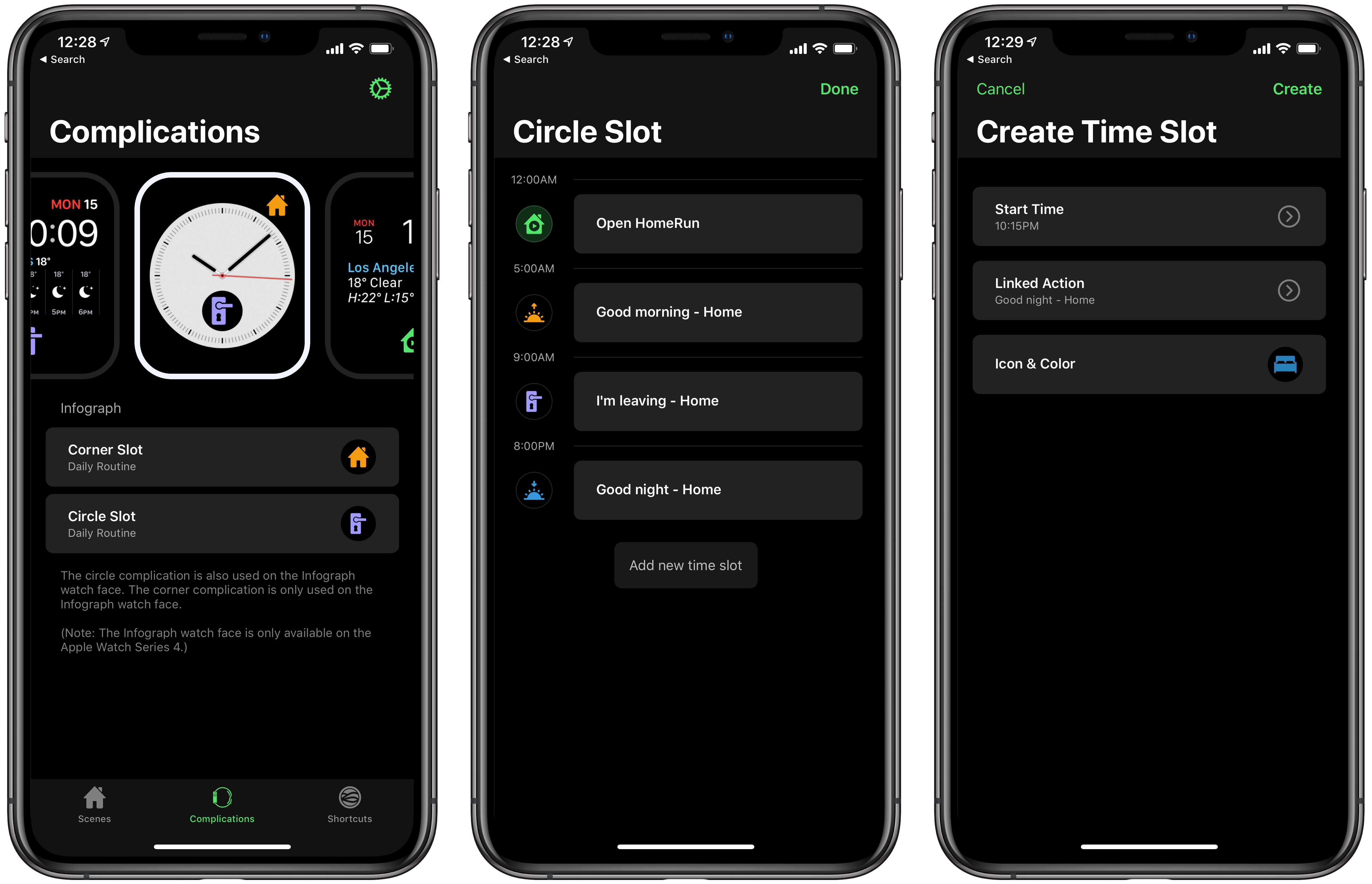 Inside its iPhone companion app, where you set up daily routine complications, HomeRun provides the ability to select a custom time for certain complications to appear on your watch face, choose which scenes are triggered by tapping those complications, and finally you can set a custom icon and color for each complication. The amount of power this provides is truly impressive.

Daily routines can be set up for each different type of complication, like the Circle slot, Corner slot, Small slot, and Main slot. If a face contains two different types of slots, such as the Infograph face, you can have multiple complications on-screen at once, each of which follow their own unique daily routine rules.

HomeRun’s approach to complications is one that’s a perfect fit for a HomeKit app, and I hope Apple takes note of this – not only would it work great for the first-party Home app, it would also be transformative when applied to a potential Shortcuts app on the Watch. Back in the Workflow days, Workflow’s Watch app cycled different complications throughout the day, but it did so in a way that felt random to me, and was thus unhelpful. A Shortcuts Watch app where I could program different shortcut triggers to appear on my watch face at certain times of day would be incredible.

As useful as HomeRun’s daily routine complications are, I’m thankful that HomeRun takes the concept of routines a step further and applies them to Siri shortcuts as well, which appear on the Siri watch face. I’m a big fan of the Siri face and have used it nearly every day since it launched in 2017. I’ve found that, given enough time, the face learns to present useful and relevant cards throughout the day – however, I still wish I had more control of what the face shows, and when. In the area of HomeKit at least, thanks to HomeRun, now I do. 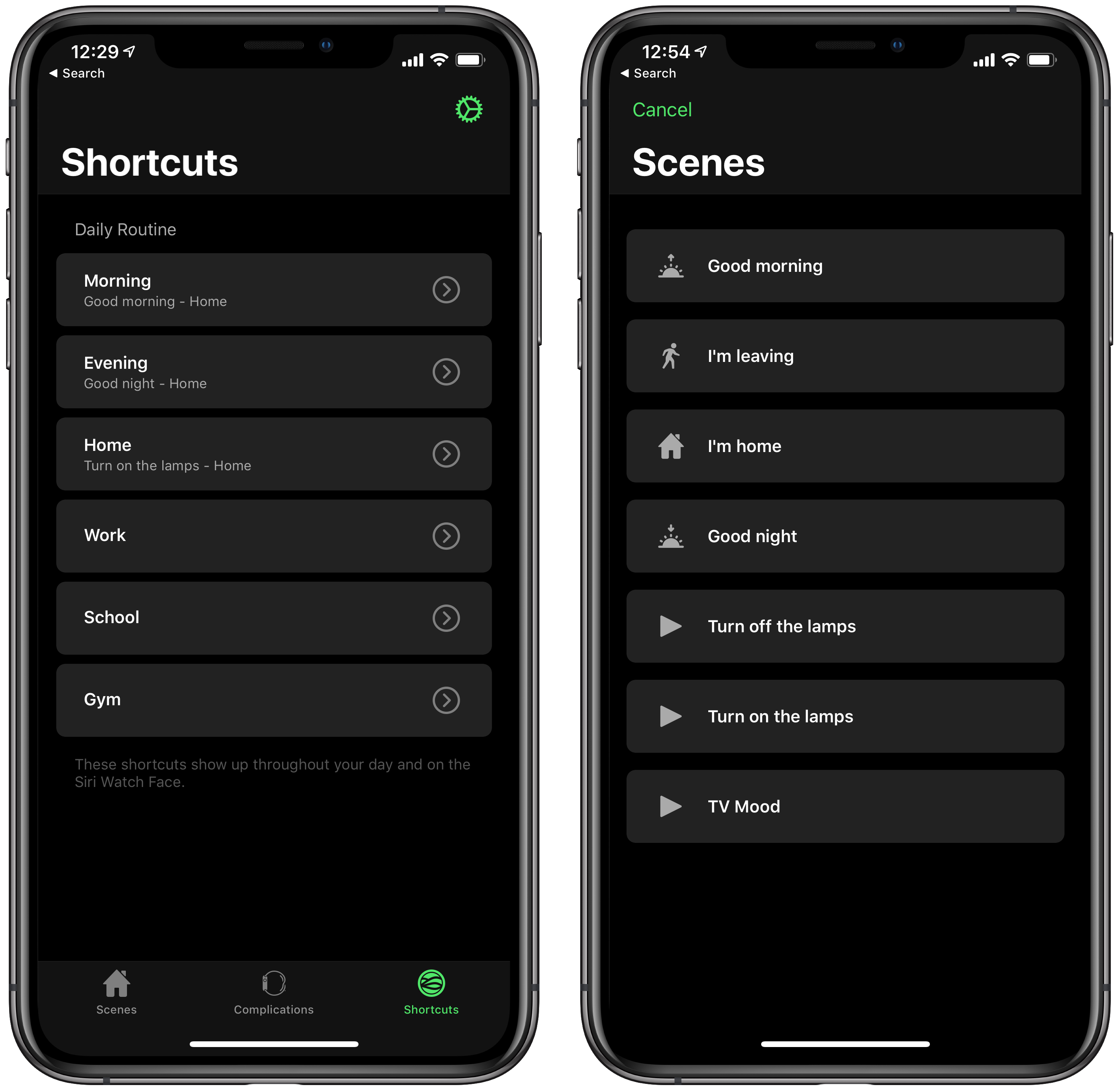 While HomeRun doesn’t enable programming specific shortcuts to appear on the Siri face at specific times, it does the next best thing: enables tying scene shortcuts to specific situations in a normal day. You can select which scene trigger you want to appear on the Siri face during six different contexts: in the morning, in the evening, or when at home, work, school, or the gym. These six contexts are based on the relevance provider baked into the Siri face’s intelligence, so even though HomeRun itself doesn’t know when you’re at the gym, watchOS does, and it enables third-party apps like HomeRun to surface specific content on the Siri face in that context.

I love being able to provide direct input regarding which cards I want the Siri face to surface from apps at different times. It’d be nice to have the option of setting specific times, like is possible with complications, but tying it to different contexts remains a useful addition.

It’s rare to find an app that was built primarily for the Apple Watch, and has iPhone support tacked on as a mere Watch counterpart – with nearly every other Watch app, the reverse is true. However, being Watch-first provides HomeRun with the unique impetus to stretch the Watch platform in ways it hasn’t been before. In version 1.2, the app has done that brilliantly.

The level of power and customization now offered in HomeRun via complications and the Siri face is a real triumph, and a great demonstration of how useful the Apple Watch can be when aided by the right apps.

HomeRun is available on the App Store.