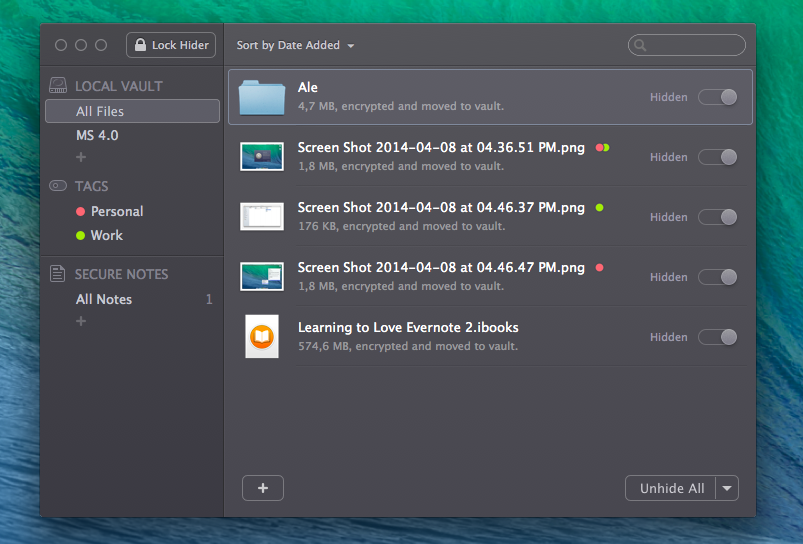 I try not to be too paranoid about the security of files I keep on my Mac, but I do enjoy the peace of mind provided by encrypting some work documents when necessary, hoping that there will be an extra layer of security for those files in case of disaster or device loss. For the past week, I’ve been trying MacPaw’s Hider 2, a new app that wants to unify and streamline the process of hiding and encrypting files in a single, intuitive interface.

Hider 2 works by creating a password-protected vault where files and text notes will be encrypted and stored. MacPaw is using AES–256 encryption, and upon first launch the app will ask you to create a new vault password (a process similar to 1Password 4) in a screen that has a nice lock/unlock animation. From a visual standpoint, Hider 2 looks nice with its dark background and UI elements, which is a welcome complement to the app’s otherwise boring technical premise.

Hider 2 does a lot of work to make encryption and file visibility uncomplicated matters for average Mac user who may not necessarily know what encryption is but can understand the idea of “protecting files”. In the main screen, Hider 2 shows your local vault, Mavericks tags (if any) and secure notes in a sidebar, allowing you to organize these sections in sub-groups; to add files to Hider, you simply drag & drop them from the Finder onto the app’s window. Hider’s peculiarity is that it combines encryption with changes to file visibility: when you add a file or folder to Hider, it is both encrypted and hidden from the regular Finder, stored securely in the Hider vault elsewhere on your Mac. Hidden files have a muted toggle; click it, and the toggle will activate, revealing the file/folder again in its original location in the Finder.

There’s no denying that Hider’s simplicity makes the process of hiding and encrypting files pleasantly easy. Drag & drop allows you to quickly grab files and folders from the Finder and hide them, and if you’re using tags on Mavericks, you can even tag files inside Hider with drag & drop without leaving the app. The app installs a system service to hide files with a right-click from the Finder’s contextual menu, and, if you don’t want to open the full Hider app every time you need to access a protected file, there’s a menubar agent that you can keep running while the app is closed to unhide and search individual files from there (alas, it doesn’t support secure notes).

Hider 2 supports external drives (a feature that I haven’t been able to test personally), and, overall, it has good integration with OS X to add, find, and show files in a variety of ways.

My only problem with Hider is that it doesn’t encrypt and hide files while keeping them in their original locations all the time – under the hood, it copies them to its secure vault. In practice, this isn’t a problem for individual files such as a couple of private photos or PDFs you don’t want to show in the Finder, but when you start adding large folders that weigh hundreds of MBs or GBs to the app, you’ll end up with less available space on your Mac (due to the copying process) and slowdowns caused by encryption.

In my tests, hiding and encrypting files didn’t cause any problems and unhiding them was fast, but a 2 GB folder full of video files required additional storage and made both the Finder and Hider 2 unresponsive during the encryption/hiding process (which took about 30 seconds on my mid–2011 MacBook Air). With another 500 MB iBooks file, I ended up with a corrupted copy in Hider that forced me to remove the file, relaunch the app (it crashed), and add it again. Your mileage may vary, but, in general, it appears that MacPaw has work to do with handling large files and folders (Mac App Store reviews also mention slowdowns and occasional problems with corruption).

Hider 2 looks good and, for the most part, works well with individual files and medium-sized folders. The app is easy to use and sports good integration with Mavericks (keyboard shortcuts and tags are especially welcome), and I appreciate the efforts of keeping file visibility and encryption accessible features for the masses.

MacPaw needs to improve how the app handles large files and folders, and a preview option for files inside the app (such as QuickLook) would drastically reduce the time spent unhiding files just to confirm what they actually are. Keep in mind that the app’s current copy-based model won’t work well with folders that need to be synced with external services (such as Dropbox) and that secure deletion hasn’t been implemented yet.