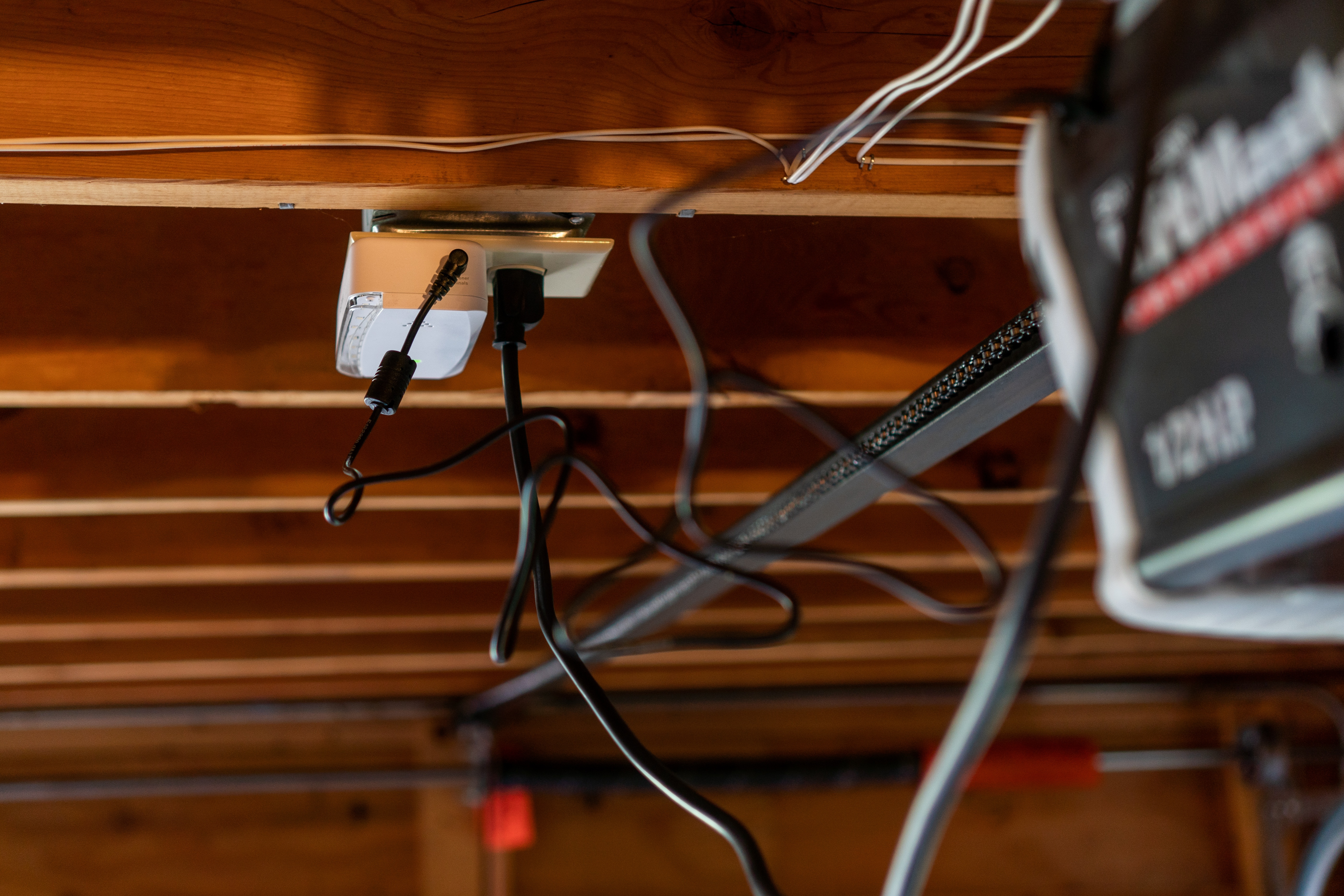 Last weekend, I dove into my first HomeKit project in a while, installing two Insignia Wi-Fi Garage Door Controllers. That’s quite a mouthful, so I’m just going to call it the Insignia Controller.

I sat on this project for months before getting started. I love playing with new gadgets and setting up automations using HomeKit, but the reality is that I live in a home with other people who aren’t as enthusiastic about my HomeKit projects. Not all of my projects have turned out well either, which has left me cautious.

Now, before I start a new home automation project, I ask myself a couple of questions:

If the answer to the first question is ‘no’ then it’s not worth the time or money to set up. A good example of eliminating a common frustration was installing Hue lights in my basement studio. Many mornings I head down juggling a cup of coffee, an iPad, and other stuff, which used to make turning on the lights a daily frustration. With the Hue lights and a motion sensor, I can ask Siri to turn on the lights from the kitchen or let the motion sensor take care of it for me. It’s a small thing, but I go up and down those stairs all the time, so the benefit adds up.

An example of automating a household routine is turning the lights at my back door and on my garage on and off. Instead of having to remember to turn them on as it gets dark, I let automation handle turning the lights on automatically at sunset and off again at dawn.

Even when I find a way to eliminate a routine or frustration though, it’s essential to consider whether the setup is likely to be reliable. If not, all I’ve done is replace one routine or frustration with another. The trouble is, it’s hard to gauge reliability up front. For example, my studio Hue lights are rock solid, but the ones outside are sometimes unresponsive because they’re too far from other bulbs that could act as relays for the signal. The convenience of having those lights turn on and off automatically is enough that I tolerate their occasional unresponsiveness, but it’s that sort of reliability issue that has made me cautious.

Those experiences kept me from trying the Insignia Controller for a long time, but when I saw it was on sale, I decided it was time to go for it. I’m glad I finally pulled the trigger because the two I purchased have worked flawlessly. 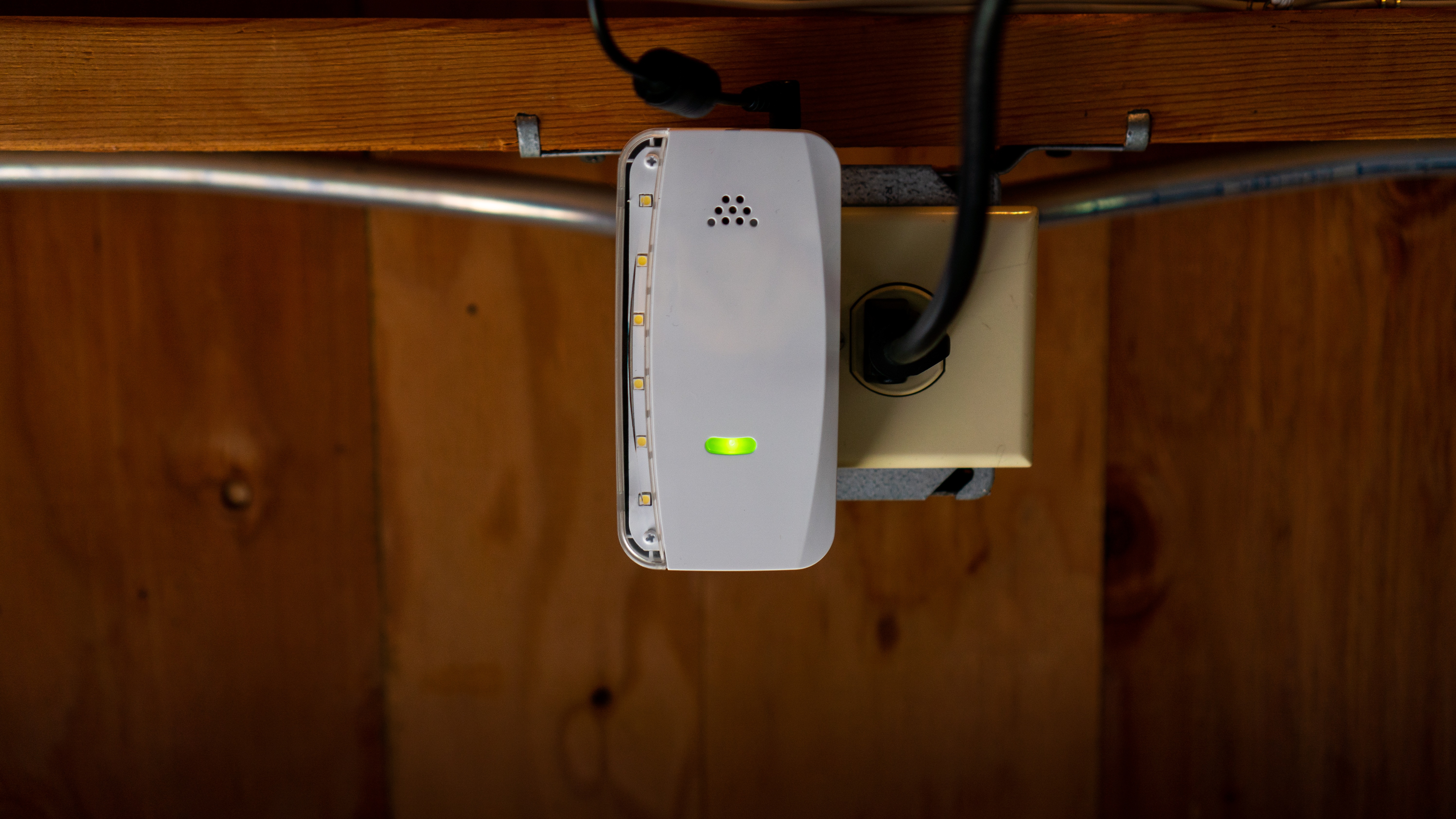 The Insignia Controller requires an electrical outlet near your garage door’s motor.

The Insignia Controller is two pieces of hardware working in coordination: the controller that signals your garage door motor to open or close the door and a sensor that can tell if the door is open or shut. Unlike other HomeKit accessories I’ve tried, there is no Insignia app. Instead, you operate the kit with the Home app or Siri. The lack of a separate app surprised me, but I’m glad one isn’t required to use the device because few accessory makers’ apps are any good.

Tapping the controller’s icon in Home opens or closes the garage as you’d expect. Before closing the door, there is a short delay while the controller unit beeps loudly to alert anyone nearby that the door is about to close, which is a nice safety feature. 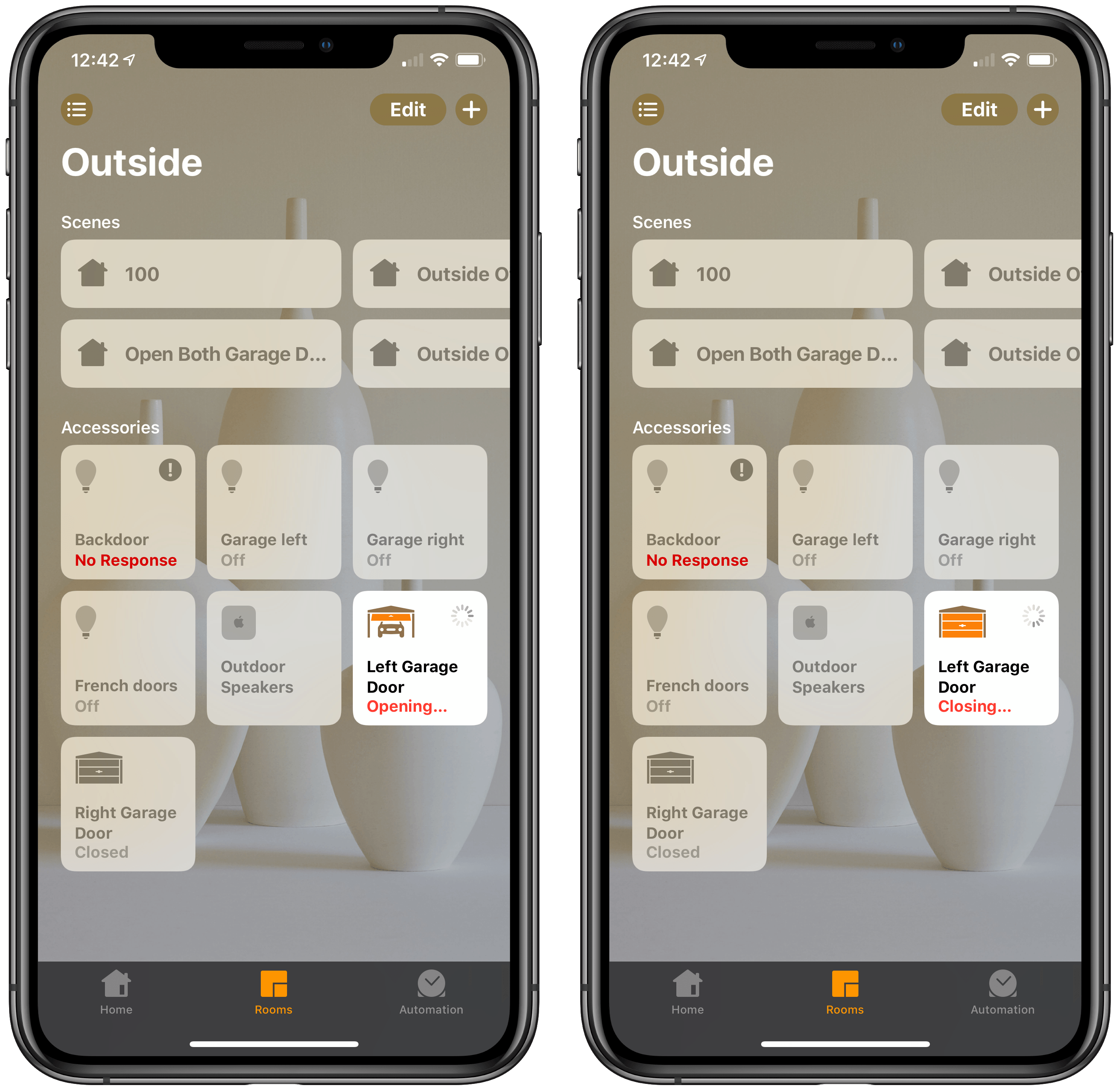 The Insignia Controller can be operated from Apple’s Home app or Siri.

Using Siri has quickly become my favorite way to operate my garage door, though there is one caveat worth noting. As with door locks, HomeKit adds an extra layer of security when using the Insignia Controller with Siri. Apple’s voice assistant will only operate your garage door if you activate it from an unlocked device. Although I’d love to ask Siri to open the garage using my HomePod on the way out the door, the unlocked device requirement means I have to confirm the action on my iPhone, which is too bad but makes a lot of sense. The limitation has made the Apple Watch my favorite way to control my garage door because it’s always unlocked when it’s on my wrist.

The second, less obvious advantage of the Insignia Controller is the door sensor that you attach to the inside of your garage door. Because it can detect if the door is open or shut, I or anyone else in my family can open the garage doors the old-fashioned way with a garage door opener or the programmable buttons in our cars without confusing the Home app. The sensor has worked every time since I installed it, which means the Home app never gets out of sync with the current state of the door. It also means that I’m no longer left wondering if I left my garage door open as I drive away from home or am lying in bed at night because I can simply check my iPhone. 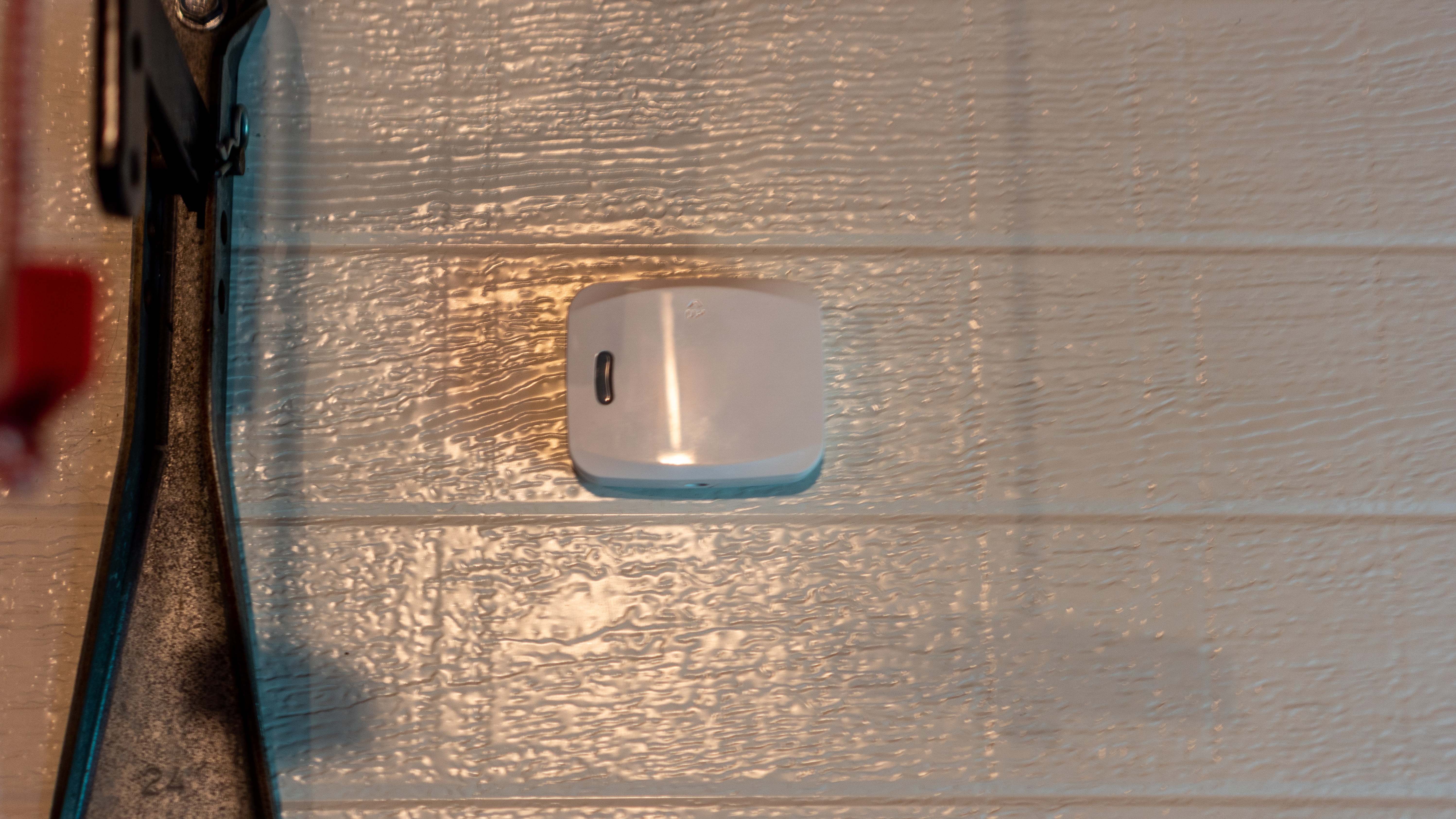 Installation wasn’t tricky. You need to have an electrical outlet near your garage door motor to plug in the controller. I also had to pull the wires for the garage door button inside the garage out of the terminals on the motor, twist the Insignia Controller’s wires around them, and then reconnect the wires. The door sensor can be attached with screws or adhesive tape that’s already on the sensor, which is what I used. The final step was to test everything to be sure the wires were connected correctly.

I probably spent the most time fiddling with my outdoor Orbi Wi-Fi extender to try to get the best signal to the garage. My garage is detached and a few car lengths from the back of my house. Although the WiFi signal in my backyard is relatively stable, I wasn’t sure whether the Insignia Controller would have trouble when the garage door was closed. Fortunately, I haven’t had any WiFi issues. It probably helps that the Controller is plugged in, so it has a powered antenna at all times and has a direct line of sight to the Orbi, albeit through the garage door. A good WiFi connection is critical though, so check that out before buying the Insignia Controller, especially if you have a detached garage like I do.

Overall, I’m pleased with the Insignia Controller. Installation was simple, and I appreciate the option of opening my garage doors using Siri from my Apple Watch instead of wondering where the garage door opener is. The ability to check if a door is shut is a bonus that provides additional peace of mind. Although it will undoubtedly require a confirmation notification, I’m also looking forward to creating a shortcut in iOS 13 that will open my garage door and turn on the outdoor lights when I drive up to my house.

Insignia is a Best Buy house brand, so I believe the Controller is only available in the United States. Although the Insignia Controller is listed on Best Buy’s website for $70, it seems to be almost perpetually on sale for $50.