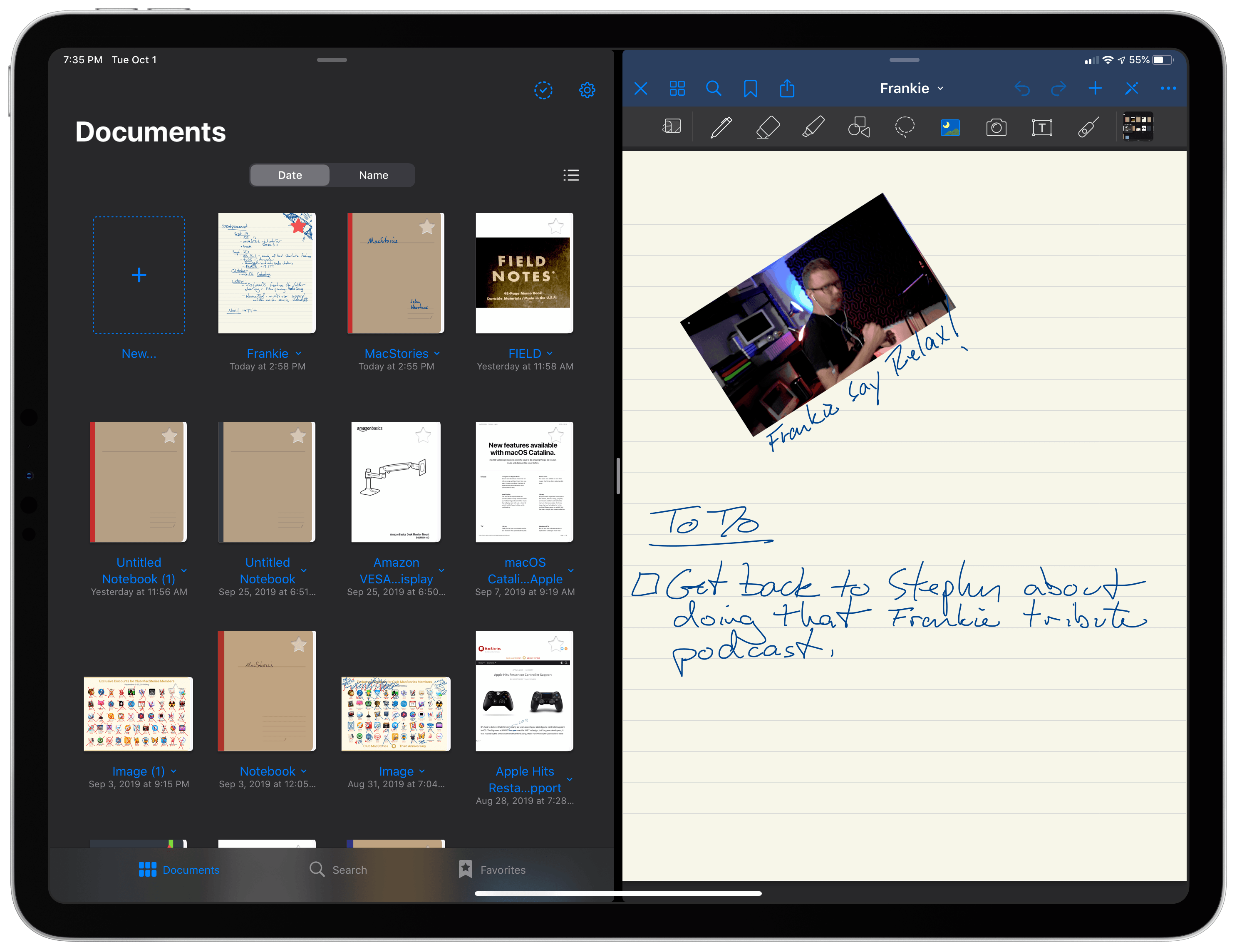 When Apple introduces a fundamental change to how apps interact with iOS (and now iPadOS), it’s always fascinating to see the different ways those changes are adopted by third-party developers. Although Apple sets a baseline for how new frameworks work, it has less control over how they are used, and it’s those implementation details that often have the greatest impact on users.

In the inaugural version of iPadOS, that’s been the case for multiwindowing. Many apps stick to the basic built-in ways to open multiple instances of the same app. However, the real power of multiwindowing is revealed by apps like GoodNotes, which goes the extra mile and provides an experience better than any other multiwindow app I’ve tried.

Dragging a PDF into a new window.Replay

What makes GoodNotes special is not just the sheer number of unique ways to open a second window for the app, though that’s impressive in itself, but the thoughtfulness of its execution. In every corner of the app where you might want to move a folder, document, page, or bit of data into a new window or document, you can. The result is a level of flexibility that even Apple’s own iWork suite doesn’t match, further cementing GoodNotes as my favorite app for taking handwritten notes.

Federico covered the built-in ways to open multiple windows of an iPadOS app, so I won’t rehash that here. Instead, I want to focus on what GoodNotes has added.

A folder, notebook, or page can be opened from the context menu that appears when you tap its title.

Starting with GoodNotes’ Documents view, you can drag and drop any document, notebook, or folder to the edge of the screen to place it side-by-side with the first window you opened. This second window of GoodNotes has all of the features as the primary one, except you cannot navigate back to the Documents view from it. In place of the back arrow is an ‘X’ button for closing the secondary window. The other way to open an item in a secondary window from the Documents view is by using the context menu that pops up when you tap its title.

Unlike Apple’s iWork implementation of multiwindow, GoodNotes lets you open the same document in two windows and edit in both views. This is a fantastic feature if you have a long notebook and want to refer back to old notes while working on another part of the same notebook. You can even drag and drop elements of one page onto another page of the document using this method.

GoodNotes already supported having multiple items open in separate tabs. The latest update adds a button to the right side of the currently-open tab that, when tapped, opens that tab in a new secondary window. The same result can be achieved by simply dragging the tab to the edge of the screen. Once an item in a tab is opened in a new window, closing it closes that document; it doesn’t return it to a tab of the primary window.

Opening a tab in a new window.Replay

With two documents open at once, working with and managing notebooks is easier than ever. You can mark up a PDF in one window while creating a list of notes in another, move pages from one notebook to another by dragging their thumbnails, lasso bits of text and drag them into another document, or screenshot a portion of a page and drag it into the other window. By dragging a PDF onto a notebook page and scaling it down, you can even create extra margins for annotating documents. Multiwindowing also works well in GoodNotes’ recently-added presentation mode by letting you share one window with a group while viewing the second privately, which can contain presenter’s notes or other reference material.

That’s a lot of ways to open a new GoodNotes window and move data around. What I love about it most though is that the process feels so natural and organic. Notes feel as analog as ever thanks to GoodNotes’ excellent ink engine while extending its utility as a digital tool. All the while, the entire process feels tactile thanks to the extensive use of drag and drop. If you take a lot of notes, you’ll love this update.

GoodNotes has also added a dark mode, which tracks the iOS system setting. I prefer having the option to set a manual override at the app level for dark mode, but it’s less of an issue in an app like GoodNotes where I’m typically working with light-colored documents anyway. The app has added dark versions of each of their template papers too, though those are static and do not change when you switch the system to light mode.

Finally, GoodNotes has added OCR scanning and also adopted the new text and item selection gestures of iOS and iPadOS 13. The OCR feature is part of a new API available to developers that identifies the text in images, making it searchable and selectable. For those times when you need to work with paper that comes into your life, it’s a nice addition to the app.

The latest update to GoodNotes is exciting if you’ve been using the app for any length of time. I used to switch between tabs frequently to compare sets of notes or move back and forth from thumbnail view to full-page view as I referred back to notes from long ago in the same notebook. With the ability to open two GoodNotes windows at once for reference or editing purposes, the app is far more versatile and powerful than ever before. If you haven’t tried GoodNotes in a while, now is a great time to check it out.

GoodNotes is available on the App Store for $7.99.