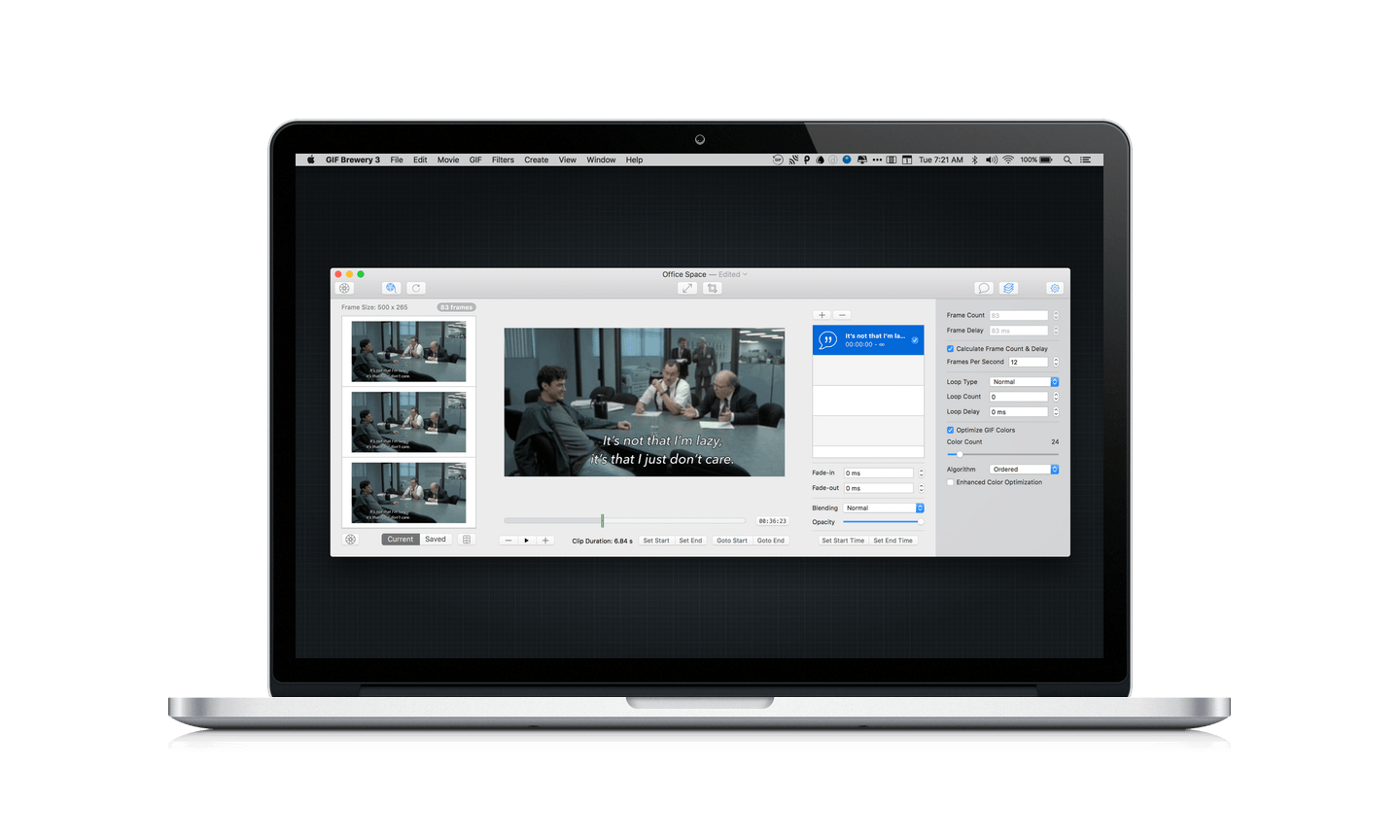 GIFs are everywhere. Sites and services like Tumblr, Twitter, and Facebook breathed new life into GIFs and created demand for things like Giphy, a GIF search engine. But a good search engine isn’t always enough. Sometimes I want to make my own GIFs. For that, I use GIF Brewery 3 from Hello, Resolven Apps.

GIF Brewery 3 includes a significant update to the app’s rendering engine. The app is now 64-bit, which allows it to handle substantially more frames per GIF than in the past. Be careful about going too wild though, because now you can create much larger files that take longer to render that may be too big to post some places. A big render can really get the fans on your Mac spinning too. 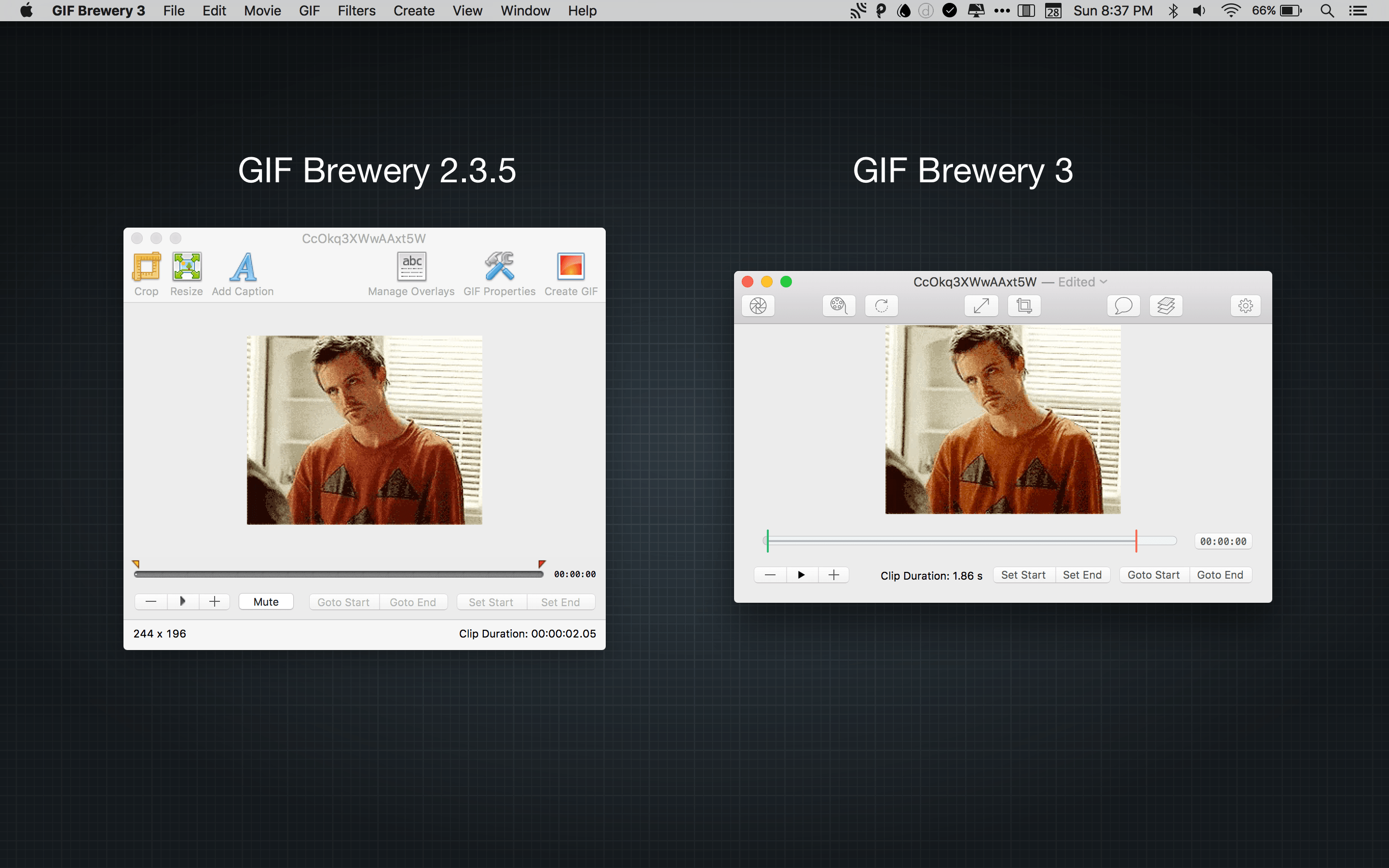 The changes to GIF Brewery are not all under the hood. GIF Brewery has been redesigned with an updated interface that looks more at home on El Capitan. Instead of a main window supported by multiple inspectors, everything in GIF Brewery now happens in one window. Clicking the buttons in the toolbar expands the window to reveal panels with various settings you can use to tweak your GIF. However, when the GIF Brewery window does not fill the screen and you close a panel, the window does not shrink back to its original size, which feels wrong to me. Instead, the content of the central part of the window expands to fill the panel’s space. Here, let me show you:

That last GIF demonstrates one of GIF Brewery’s other new features – the ability to make screen recordings and render them as GIFs. In addition, GIF Brewery can record GIFs using your FaceTime camera or an iOS device attached to your Mac. The ability to record GIFs of an iOS device is an especially nice way for developers to create marketing materials and writers to demonstrate hard-to-describe features and visuals.

There are two main tools for building GIFs with GIF Brewery. The first is the clip viewer in the main window. By dragging the start and end handles, you can select the portion of a longer video file, from which you want to generate a GIF. You can also use GIF Brewery’s new frame management system. Clicking on the frame management button in the toolbar opens a panel on the left side of the GIF Brewery window with each of the frames of the video clip you are editing. You can copy some or all of those frames as ‘Saved’ frames and then reorder or delete individual frames, and render a GIF from just the saved frames.

These two tools can also be used together. Ticking the ‘Calculate Frame Count & Delay’ checkbox in the properties panel causes the number of images in the frame panel to update dynamically as you adjust the length of a clip. Once I got the hang of starting with the video drag handles, and then refining a clip in the frame panel, which was not initially clear to me from the interface or help documentation, I found that this is the most precise way to create a GIF. Fortunately, the developer is working on updating existing tutorials for GIF Brewery 3. 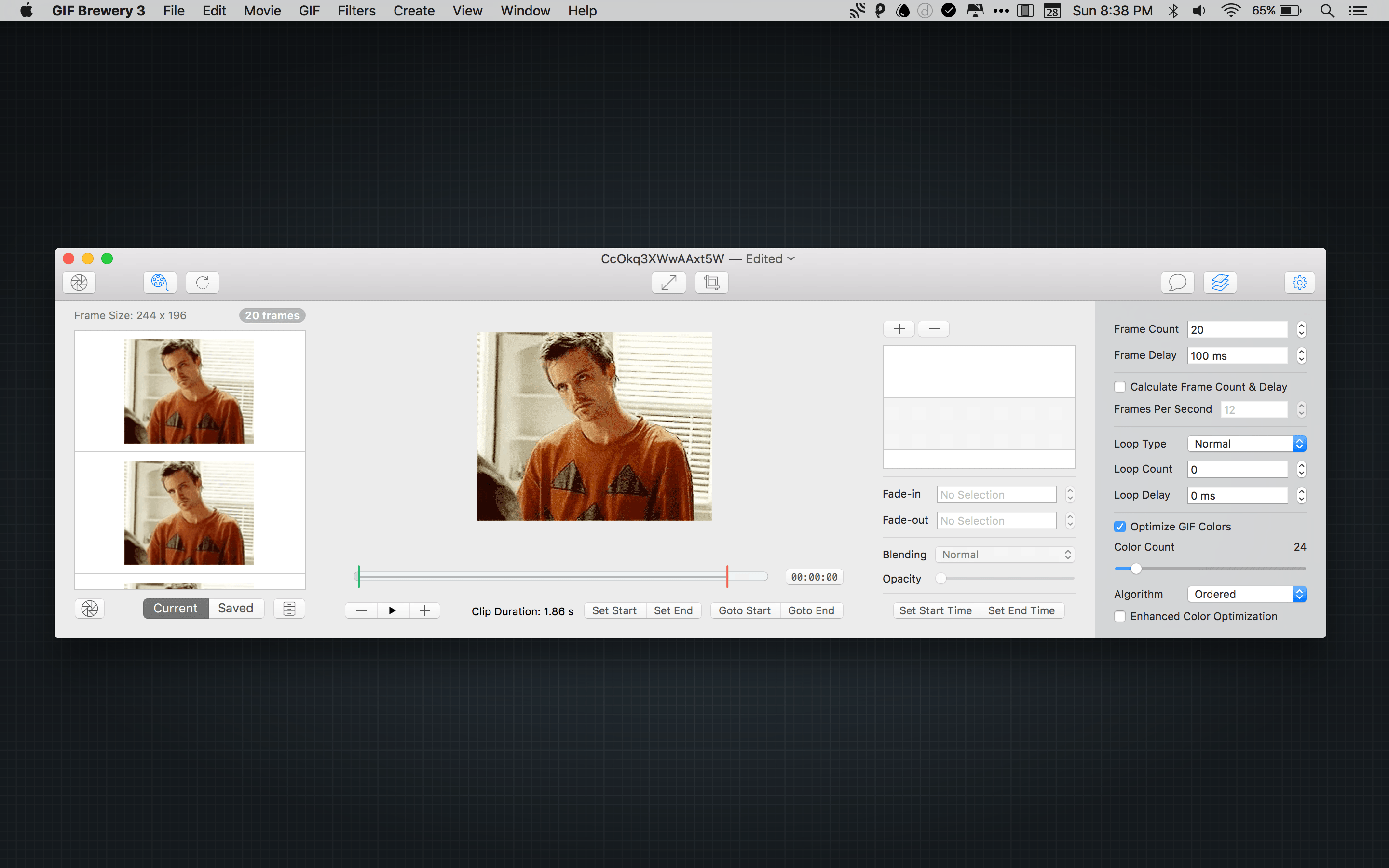 In the prior version of GIF Brewery, the only way to preview your GIF was to click the ‘Create GIF’ button and wait for the GIF to render. That trial and error process wasn’t ideal, especially with bigger GIFs that could take a while to render. GIF Brewery 3 adds a Loop Preview feature that loads the frames of your GIF and plays them back to give you an idea of what the final GIF will look like. 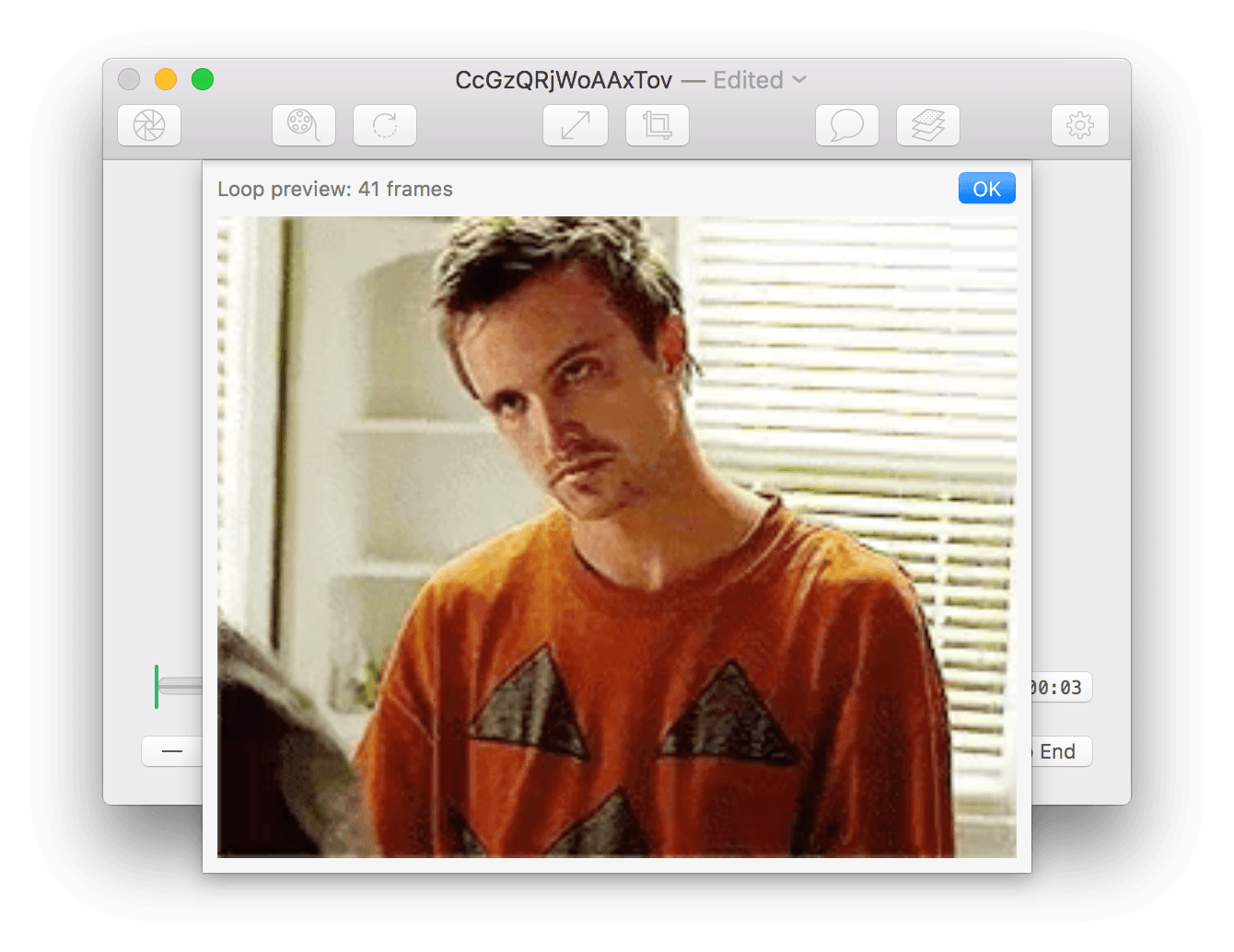 As with the prior versions, GIF Brewery 3 includes a properties panel that lets you tweak all sorts of settings, including the number of frames, frame delay, color space, and other settings. I’m not sure it would be possible given the number of variables involved, but a few presets that could be applied with one click of a button would be nice because some of the settings can be a little confusing for the uninitiated. GIF Brewery 3 also preserves the prior version’s fine-grained control over images and text that can be overlaid on your clip, and adds even more filters that can be applied to each frame. I did run across one bug when adding a long, centered text overlay. If I went back to edit the text with something shorter, the text would no longer be centered, instead appearing at the far left edge of the GIF.

I use GIF Brewery most often in two scenarios. First, I use it to save GIFs my friends post on Twitter for my own use. Twitter converts GIFs into MP4 video files. By right-clicking on a clip, I can save it to my Downloads folder, import it into GIF Brewery, and quickly reconvert it to a GIF for my own use. Second, I create occasional screen recordings for articles like this one, which is far easier with GIF Brewery now than when Federico was using GIF Brewery 2.3 with Reflector. GIF Brewery also works well with longer files like movies to create GIFs like the one at the top of this article. If you want or need to go beyond the GIFs created by others, I recommend trying GIF Brewery 3. Despite a few rough edges, GIF Brewery’s new features and rendering engine improvements make it my favorite GIF utility.