One of the first Mac games I ever played has made a comeback on the Mac App Store. Sketchfighter 4000 Alpha is a space-themed shooter that adds an exploratory twist on Asteroids-like controls. The game is a terrific riff on a classic arcade genre, but what holds the experience together and elevates it is the hand-drawn art and soundtrack.

Sketchfigher, by developer Lost Minds, was originally published in 2006 by Ambrosia Software, a Mac game publisher with roots in the early 90s that faded from the Mac gaming scene and finally went completely offline last year. That left fans with no way to download the app or activate existing licenses.

It’s been years since I played Sketchfighter, but as you can see from my tweet, I never forgot it. So, when I stumbled across a preview trailer for a reboot of the game, I was excited. As it turns out, Lost Minds was able to get the original source code for the game, update it for modern Macs, and release it on the Mac App Store.

If you played the original game as I did, part of the reboot’s fun is the nostalgia factor. Even if you’ve never played Sketchfighter, though, it’s a wonderful classic arcade experience. The game takes the sort of doodles so many students have scribbled in notebooks as teenagers and brings them to life on the same graph paper you’d find in backpacks.

Your goal is to maneuver a spaceship through a series of zones, avoiding obstacles and weaponry, collecting items, eliminating enemies, and fighting bosses. The controls are simple. The arrow keys control the direction your ship flies, and the space bar fires your weapons. That doesn’t mean your ship is easy to control, though. Both the flight physics and ship itself reminded me of Asteroids, which works well in this context. As you fly your ship, it drifts, carried by momentum towards walls, enemies, and other obstacles that can inflict damage, eventually leading to your demise. Along your route, there are also spots to refresh your health, which are a great place to visit before a big boss fight because once your health runs out, your ship explodes. 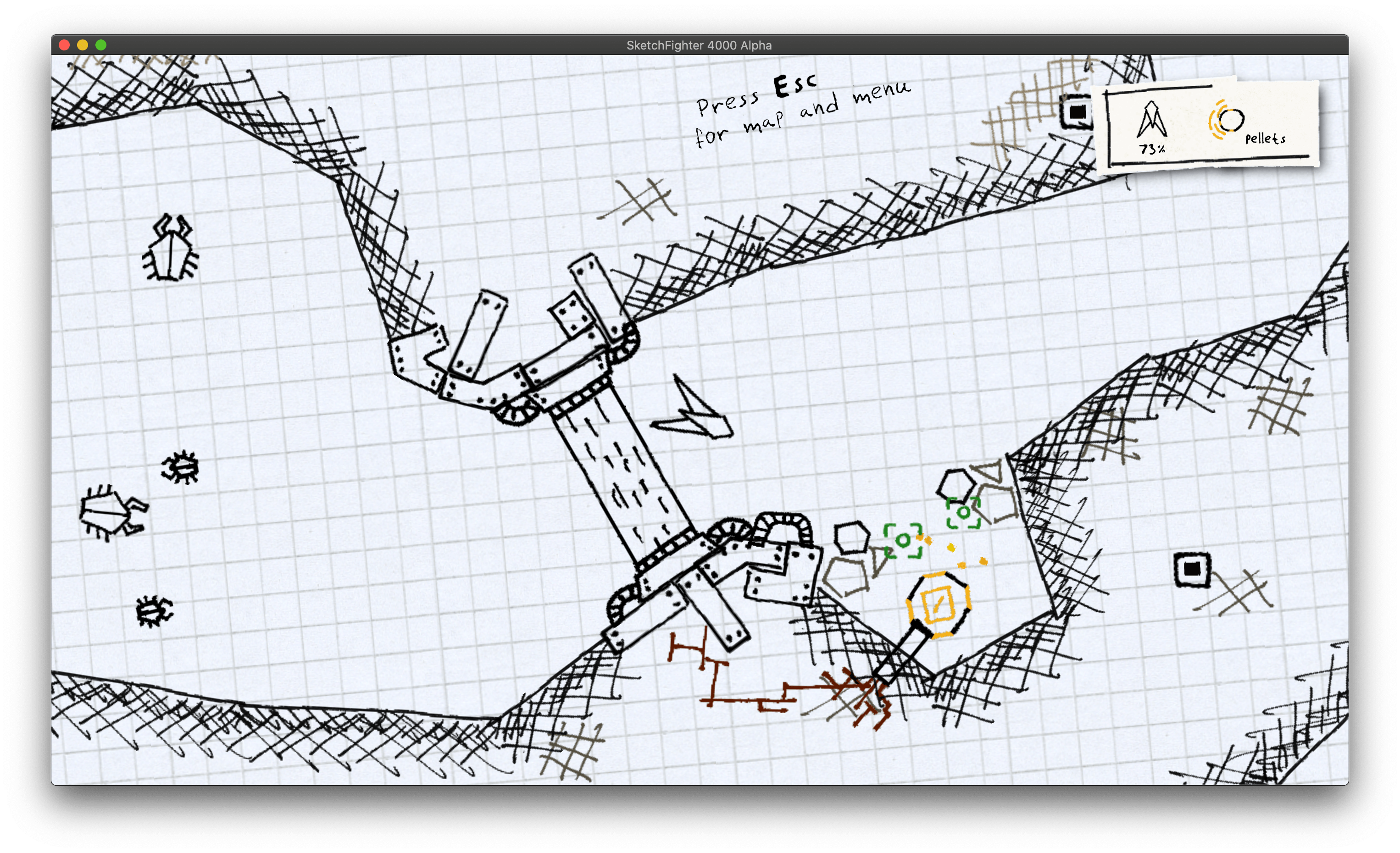 Sketchfighter features three save slots, so dying doesn’t mean starting over from scratch every time. Also, although I’ve only played in single-player mission mode, there are also two-player co-op and competitive modes.

There isn’t too much more I can say about Sketchfighter without giving away some of the surprises in later levels, but it’s worth emphasizing that the game’s relative simplicity is elevated above other straightforward arcade shooters by its nostalgia-evoking graphics and soundtrack. The music is a relatively short loop, but it’s incredibly catchy and the sort of tune that will stick in your head for days. 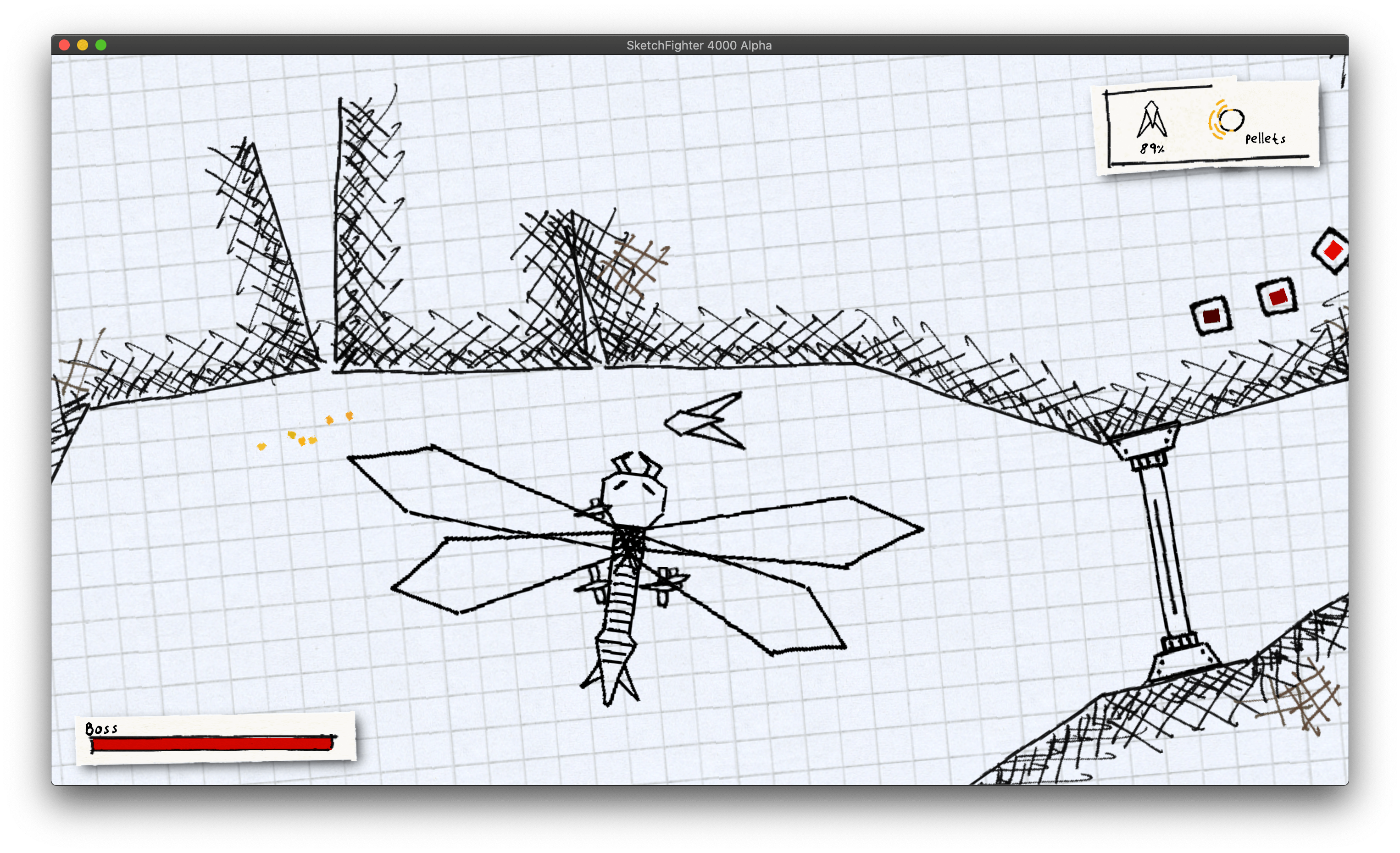 With so many games gone with the transition to 64-bit apps, I was happy to see Lost Minds take the time and effort to revitalize this small but fun corner of Mac gaming history. Updating older games isn’t trivial, which is why reboots like Sketchfighter are sadly the exception rather than the rule.

The Mac is lacking as a gaming platform in a lot of ways, but it’s perfect for quirky arcade-style fun like Sketchfighter. The game runs well on my 2018 Mac mini and has never sounded better than through my Harmon Kardon Soundsticks. What’s more, Sketchfighter is a terrific diversion when you’re sitting at your Mac and need a break. I hope it’s wildly successful and gets ported to the iPad eventually, too. It would be great fun to play with an iPad Pro attached to the Magic Keyboard with Trackpad.