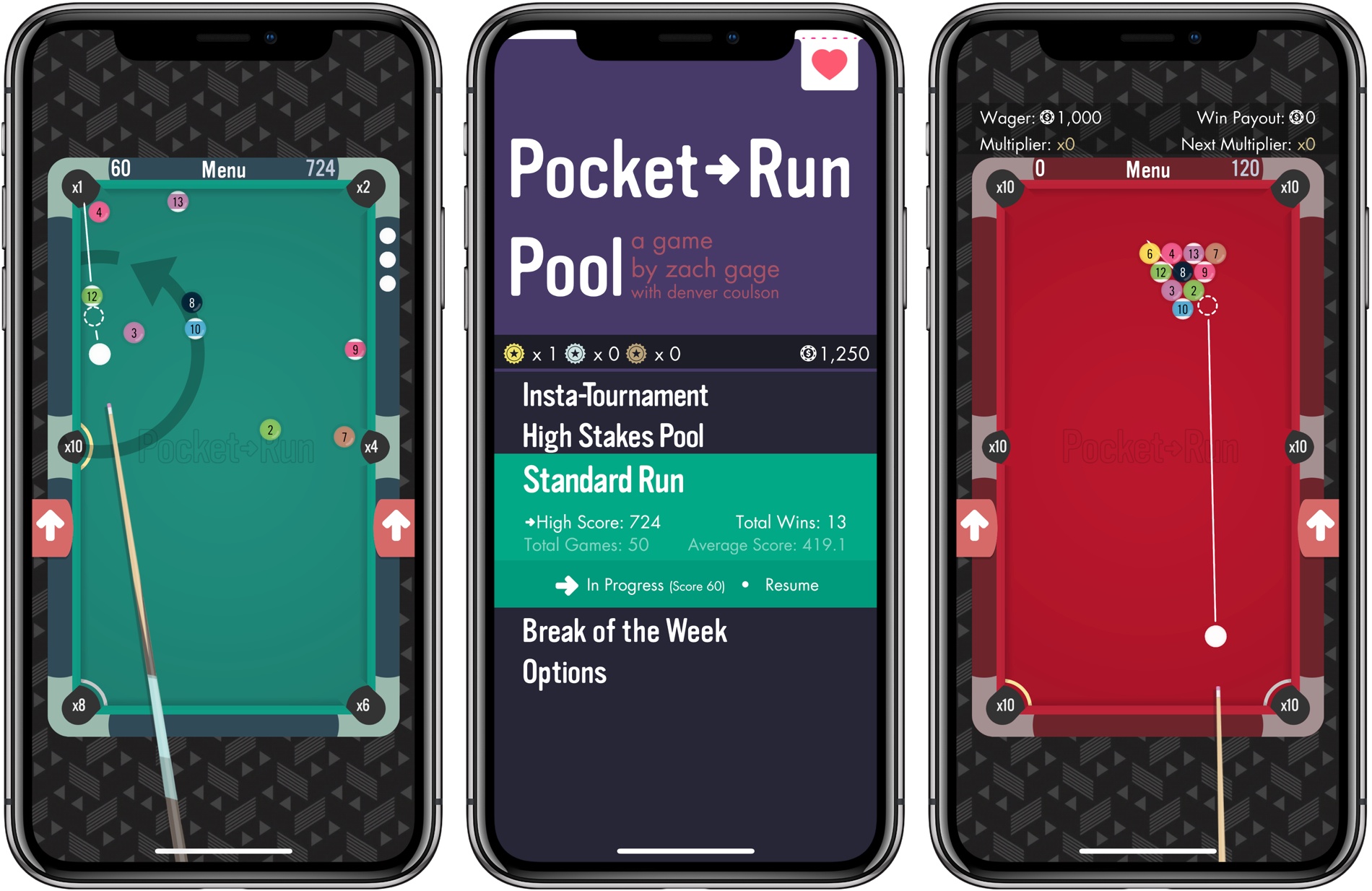 Zach Gage has earned a reputation by taking time-tested but tired classic games and reinventing them for mobile. Past hits from Gage like Flip Flop Solitaire, Really Bad Chess, and Typeshift zero in on what is fun about classic games and add a twist that breathes new life them. Pocket Run Pool is no different.

In its most straightforward mode, called ‘Standard Run,’ the goal is to get the highest score possible by sinking pool balls into the pockets of a billiards table. As with other Gage games though, there’s a hook. The score is determined by the number on each ball multiplied by a value assigned to each pocket.

When you break, every pocket is worth 10 points. After that, the values range from 1 to 10 and rotate their assigned pockets after each successful shot, except that at random intervals, the pocket values rotate multiple positions. It’s a simple mechanic but one that adds whole new dimensions of strategy and tactics to an otherwise simple game as you try to line up each shot to earn the maximum points.

The rotating pocket values encourage players to take risks with difficult shots. Each attempt involves lining up a shot by swiping across the iPhone’s screen to aim the cue stick. There are indicators extending from your cue stick and the ball you’re aiming at to help line up shots. When you’re ready to lock in the shot, tap one of the arrow buttons on the side of the pool table, and flick the cue stick. The faster you flick, the stronger the shot. Throughout the game, the experience is enhanced by a jazzy soundtrack and the use of haptic feedback on supported devices, which gives the ball collisions a realistic feel.

Taking risky shots is rewarded with high scores, but missing them has downsides too. You start each match with three lives. Miss a shot or sink the cue ball in a pocket, and you lose a life. Lose all three lives, and the game is over, cutting short the pursuit of a new high score.

Standard Run serves as an excellent training ground for the rest of the game acclimating players to the mechanics and strategies for earning high scores. There are three other modes of play available: Insta-Tournament, High Stakes Pool, and Break of the Week. 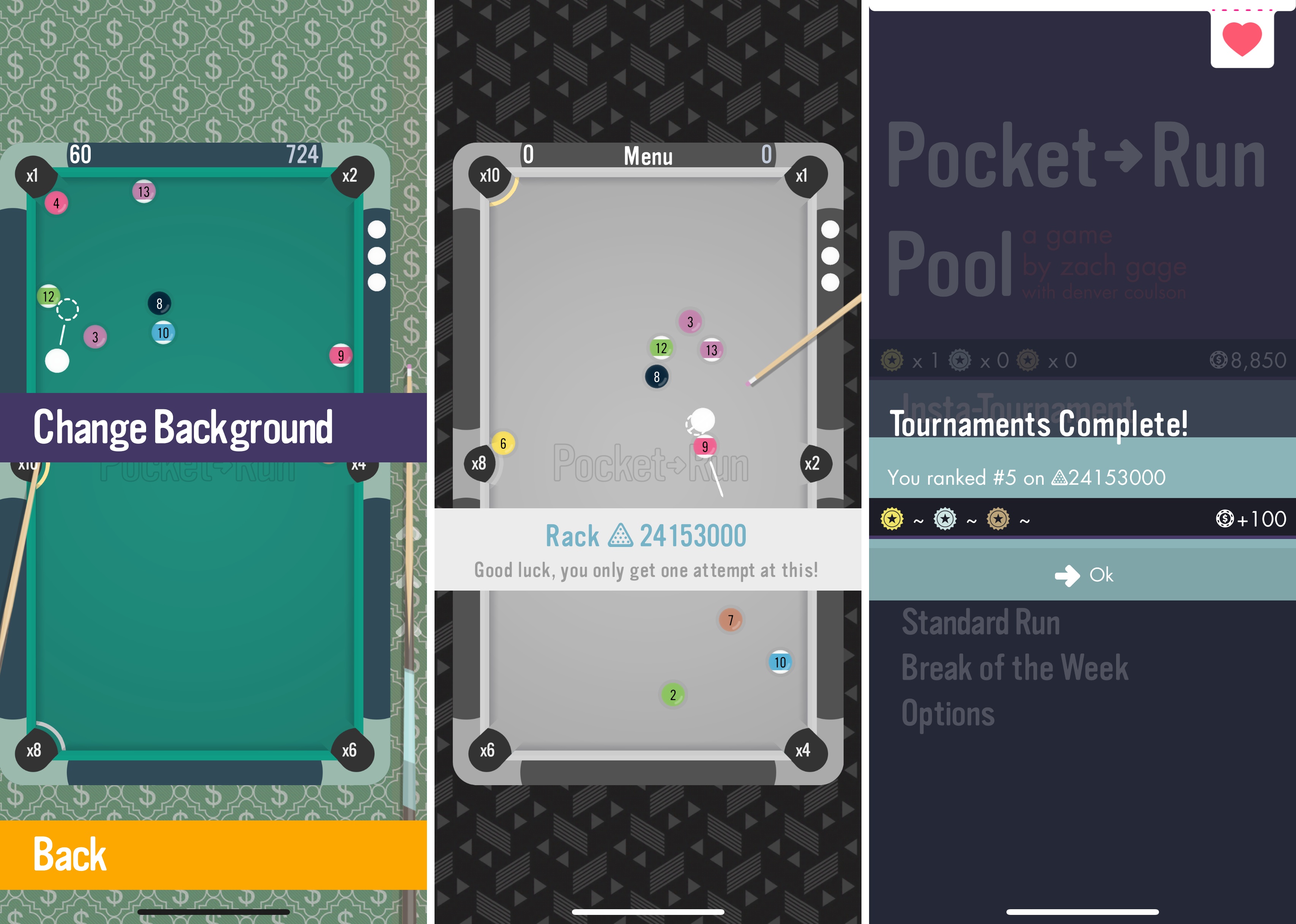 Insta-Tournament is an asynchronous tournament mode that lets you compete with others around the world. If you’re using the free version of Pocket Run, each match requires you to spend in-game coins to play, but play well, and you can earn coins back to use elsewhere in the game. In High Stakes Pool mode, players can bet the in-game currency to see if they can multiply their coin hoard or win unique pool cues and more color schemes by defeating levels with special challenges. In-game currency is also available as an In-App Purchase.

The final mode is probably my favorite. Break of the Week is a weekly challenge where the pool balls start in a predetermined layout on the table. All players face the same challenge and compete to see who can score the highest that week.

The Standard, Insta-Tournament, and High Stakes modes are all playable as part of the game’s free download. If you play the free mode, you’ll see ads periodically between sessions. A one-time $3.99 In-App Purchase unlocks Break of the Week and alternative backgrounds, removes ads, and dispenses with the need to use in-game currency to participate in tournaments.

Pocket Run Pool is loads of fun. It’s familiar, which makes it easy to get started playing, but it’s surprisingly deep and nuanced at the same time. I’d prefer if the game were paid upfront with everything unlocked. I don’t need a free, limited version to convince me to try a new Zach Gage game – his past games have taken care of that – but I understand that not everyone is familiar with Gage’s work, so it’s hard to argue with the model. I recommend buying the In-App Purchase for Break of the Week alone, but paid or free, Pocket Run Pool is fun and absorbing, and I highly recommend it.

Pocket Run Pool is available on the App Store as a free download with a $3.99 In-App Purchase to unlock all features.