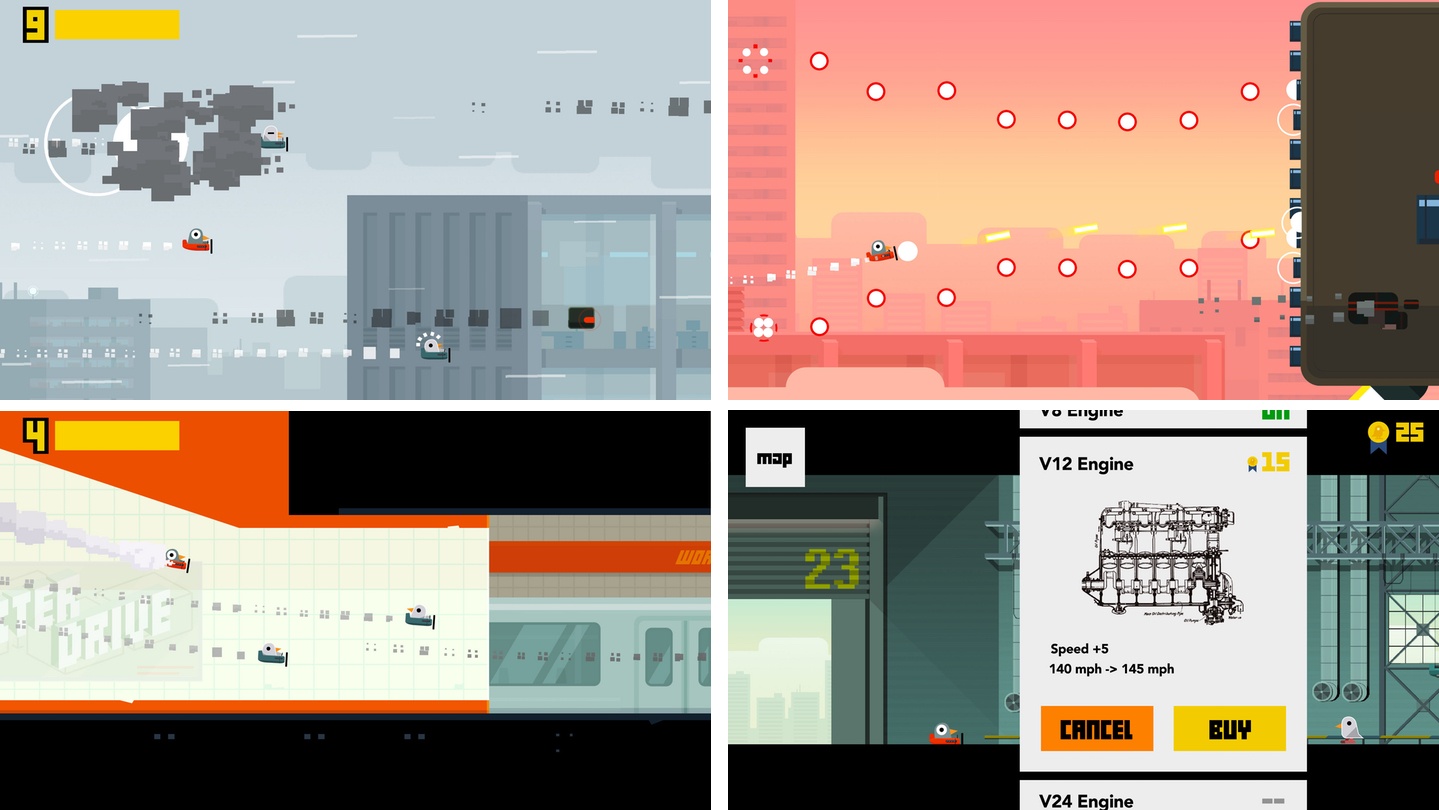 Pigeon Wings is a hyper-fast, racing game with shoot ‘em up elements and a lot of personality. You play as Pigeon, a pigeon-pilot tasked with saving Megalopolis from the evil Duke Dexter. The backstory immediately sets a light-hearted, humorous tone for the game that doesn’t get bogged down in long cut scenes explaining what’s happening. What sets Pigeon Wings apart though, is its tilt control steering system. The controls work flawlessly becoming second nature so quickly that they fade into the background making it easy to get lost in the game’s short races.

At its core, Pigeon Wing is a racing game interspersed with shoot ‘em up levels where you battle Duke Dexter’s pilots. Each of the 50 levels is relatively short making it easy to dip in and of the game when you have time. Touch Arcade reports that another 20 levels and an endless mode are on the way. As you complete levels, you’re awarded up to three coins that can be exchanged for items like better engines for your airplane.

The most surprising aspect of the game though is its controls. The tilt controls of most games I’ve played have been disappointingly imprecise or laggy, but not Pigeon Wing. It took just a couple short races to get used to how much I needed to tilt my iPhone to move Pigeon’s plane up and down to avoid obstacles. Acceleration is controlled by holding your thumb down on the left side of the screen. Firing weapons and boost are controlled by tapping the right side of the screen.

The racing levels are challenging. The landscape rises and falls as you fly requiring you to navigate your plane up and down to avoid hitting things and having to restart the level. At other points in the game, the obstacles are blocks that require quick shifts up and down. The shoot ‘em up levels require you to shoot down Duke Dexter’s pilot while dodging incoming fire and add welcome variety to the game.

The soundtrack of Pigeon Wings fits perfectly with the design of the game. The music is just as fast-paced as the action, which adds a sense of urgency to the races. The design is excellent too. The big pigeon in a tiny red airplane complements the whimsy of the storyline.

I’ve been playing a lot of puzzle games lately, and Pigeon Wings has been a fantastic break from them. There aren’t many games that get tilt controls right, but here, they get out of the way leaving you with pure, fast-paced fun.

Pigeon Wings is available on the App Store.