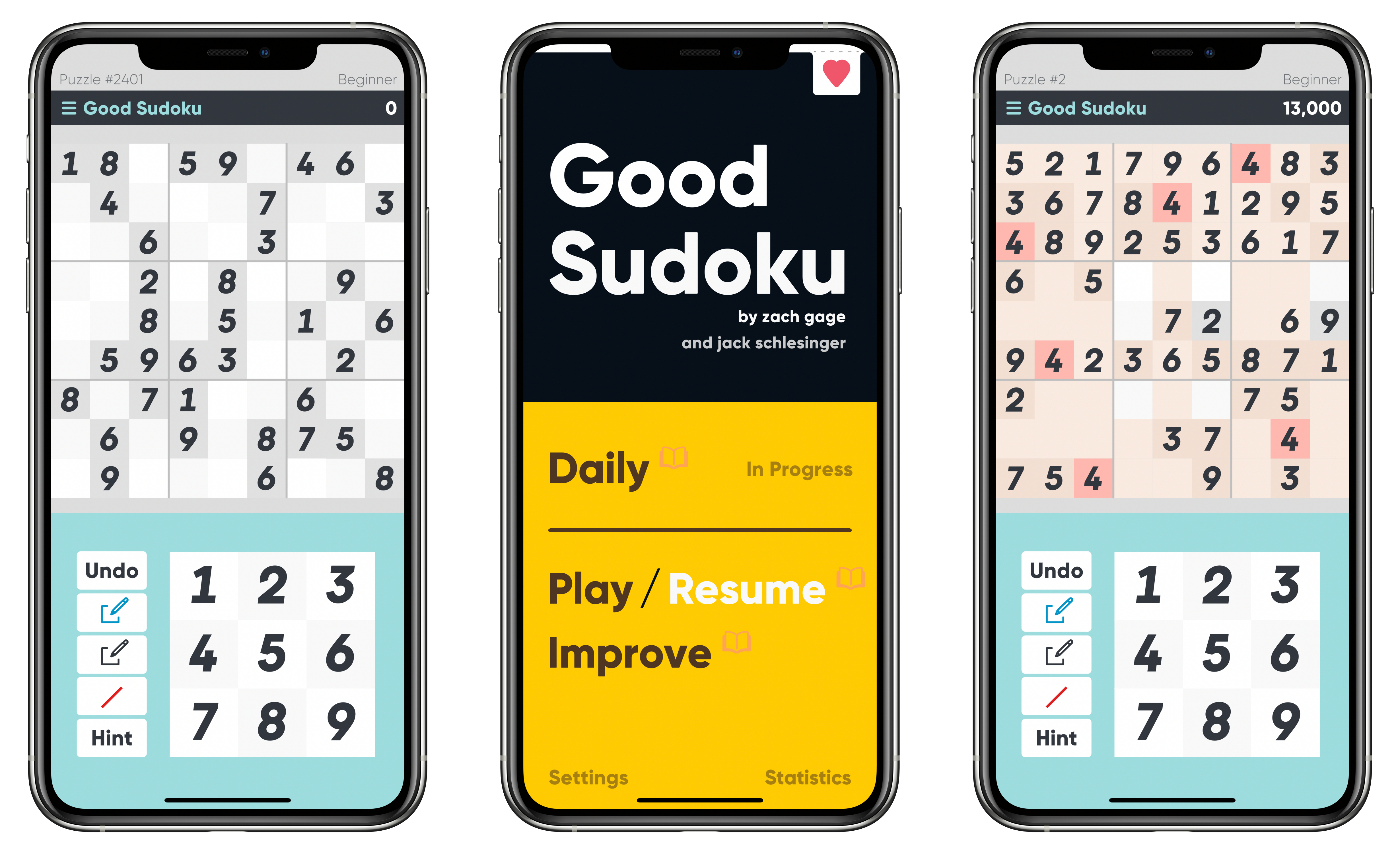 Zach Gage has a knack for giving classic games an interesting twist. Sometimes that means turning the rules upside down and inside out like Flipflop Solitaire or Really Bad Chess. Other times, it means removing the tedious and boring parts of games to breathe new life into them, which is precisely what he and Jack Schlesinger have accomplished with Good Sudoku.

I started with Good Sudoku as a novice. I’ve played sudoku before and knew the rules, but it’s not a game that has ever grabbed me and stuck. As a result, as much as I’ve enjoyed Gage’s other games, I approached Good Sudoku with a healthy dose of skepticism. However, after several days of playing the game, I’ve found that stripped of its tedious aspects, sudoku is engaging to the point of being addicting and a whole lot of fun.

If you haven’t played sudoku before, the basics are pretty simple. It’s played on a 9 x 9 grid subdivided into smaller 3 x 3 grids. The object is to fill the grid with the digits 1 - 9, so there’s only one of each numeral in a row of 9 squares, a column of 9 squares, and the 3 x 3 sub-grids called houses.

Each board is filled in with some numbers to start, and the rest of the squares are left blank for you to fill in, which is where things get tricky. As Gage and Schlesinger explain on the game’s website, sudoku puzzles are generated programmatically, allowing puzzle creators to dial in their difficulty. Gage and Schlesinger built a sudoku generator that created the over 70,000 puzzles in the game, but they didn’t stop there. Instead, they chose to run the puzzle generation AI in the background as you play, allowing the game to offer insights, tools that improve the experience, and hints, all of which remove the most frustrating aspects of the game. 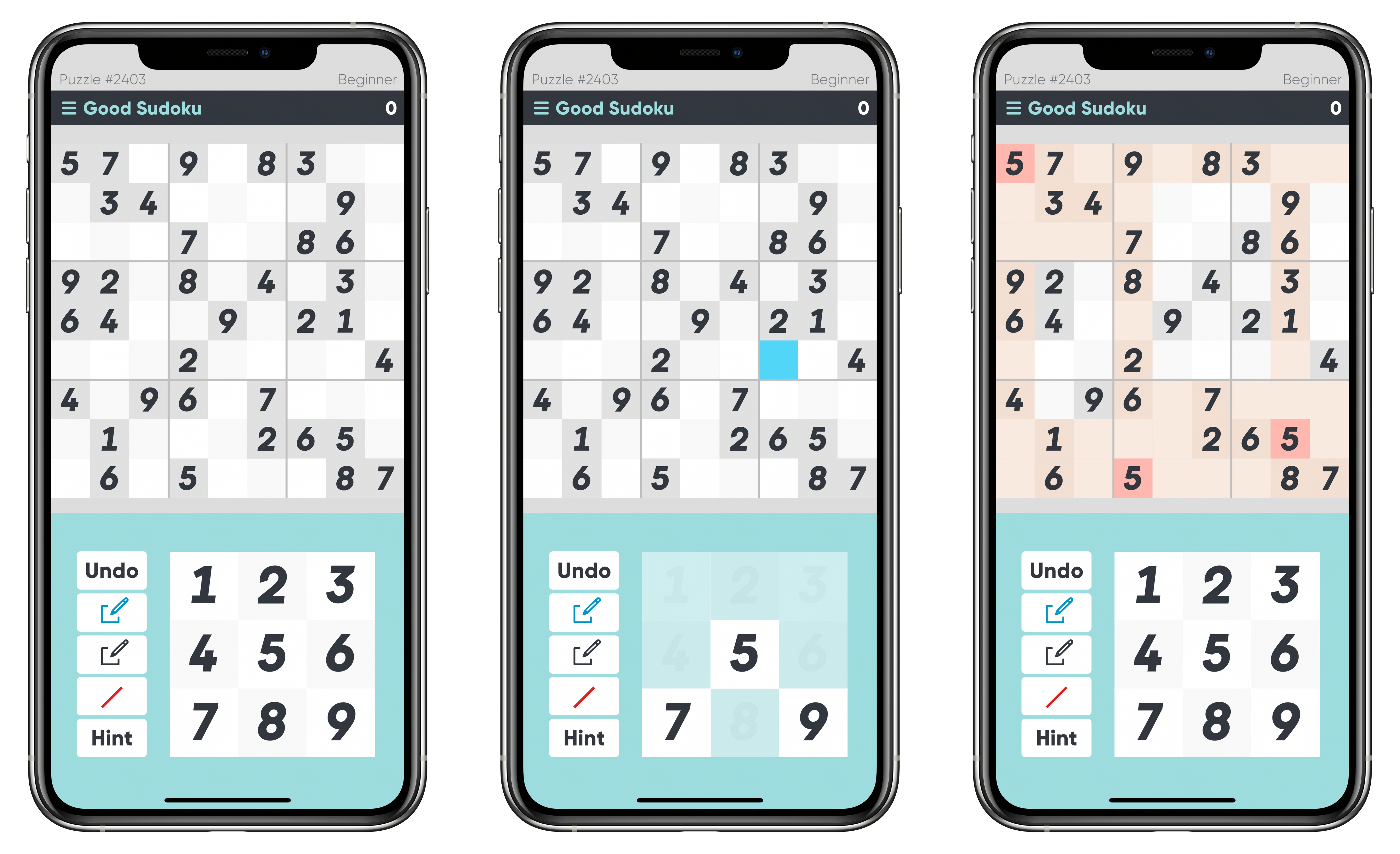 Good Sudoku uses a dedicated number pad and a system to show you your options.

Good Sudoku uses a dedicated onscreen number pad for filling out puzzles, a note-taking system, and hints to help you learn increasingly sophisticated techniques for solving puzzles. By default, tapping on a number in the number pad highlights every instance of that number in the puzzle and the other squares affected by it, leaving only the open spots for the number unmarked. However, this can be turned off or adjusted in settings.

Also, tapping on a blank square in the puzzle displays just those digits of the number pad that can be played in that square. The combination of tools is powerful and feels a little like cheating. Still, even if you begin playing with a simple trial and error approach as I did, the assistance that Good Sudoku’s tools provide allows patterns to begin to emerge even for beginners. Instead of feeling like work, where my job is to check and recheck which numbers are still available in each column, row, and house, I found myself exploring the relationship between the way the numbers were laid out on the grid and considering strategies for solving them. 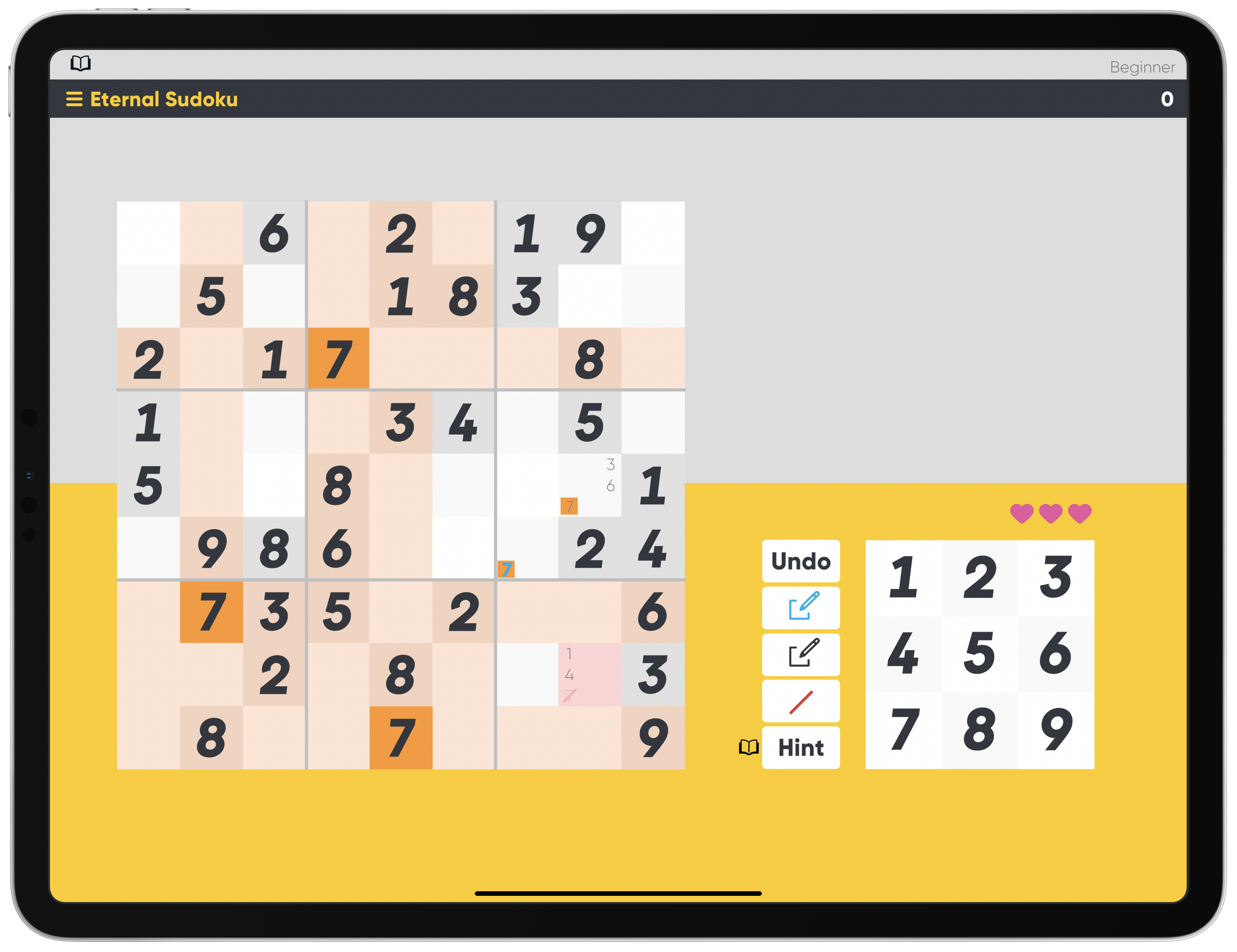 Good Sudoku includes a note-taking system too. You can display all the numbers that can be played for an individual square or all squares. Also, Accent Notes and Cross-Out Notes can be used to eliminate specific numbers from consideration or to assure you that a number goes in one of a couple of squares. 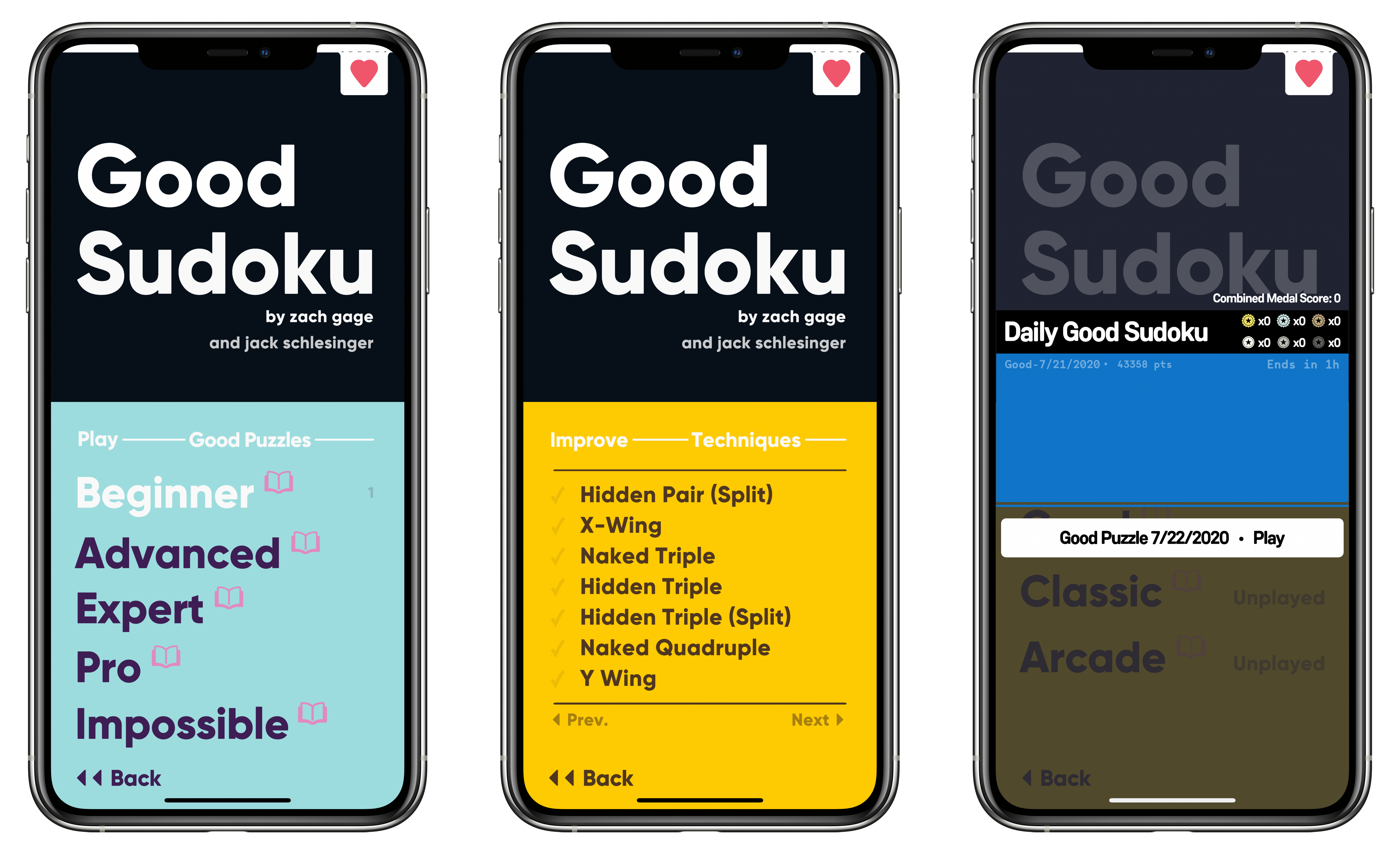 If you back yourself into an unsolvable corner, Good Sudoku lets you know and can rewind your moves to the first spot where the puzzle can still be solved. There’s also an introduction to the basics of how to solve puzzles, help tips throughout, and an entire section called Improve that’s dedicated to demonstrating strategies for solving puzzles. Coupled with puzzles divided across multiple levels of difficulty and modes, three daily challenges that get harder throughout the week, and global leaderboards, Good Sudoku is a rich, deep puzzle game that will grow with you as your skills develop, keeping the game fun and challenging

I’m a big fan of Good Sudoku’s design too. It shares a similar aesthetic to previous releases by Gage that combine a focused and clear look with excellent sound design, music, and haptic feedback on the iPhone, all of which create a welcoming environment for concentrating on each puzzle.

Sudoku puzzles can be incredibly challenging, which is a big part of why they are fun and so popular. The downside, though, is the tedium. It’s a barrier to newcomers getting started and a layer that masks the satisfaction of seeing the deeper strategies that can be employed to solve a difficult puzzle.

Good Sudoku removes barriers to enjoying sudoku with excellent design. It’s not just that it looks good. It does, but Good Sudoku accomplishes something that you don’t see too often. It takes an established game and makes it better by applying computing power so that it doesn’t get in the way of enjoying the game. Whether or not you’re a fan of sudoku, an experienced player or a novice, Good Sudoku is a fresh take on a classic game that is worth checking out.

Good Sudoku can be downloaded for free from the App Store. Some features are available only as part of the game’s $3.99 In-App Purchase.