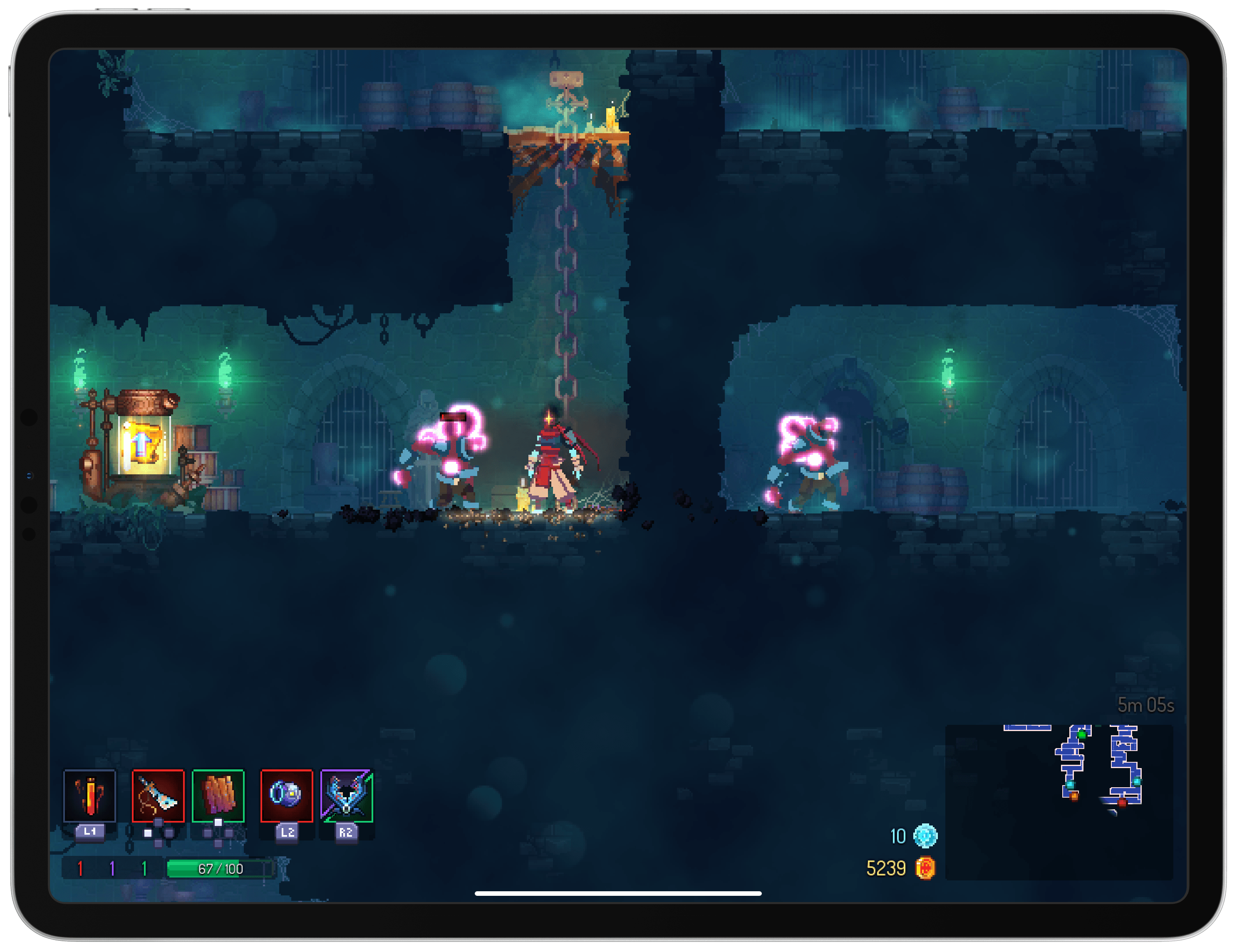 Dead Cells by Motion Twin landed on mobile for the first time today with its release on iOS. The game, which the Bordeaux, France-based game studio describes as a ‘rogue-lite, metroidvania action-platformer,’ has been adapted for mobile by publisher Playdigious. I’ve been playing Dead Cells on a variety of iOS devices for the past two weeks both with onscreen controls and controllers, and it’s quickly become my favorite iOS game of 2019 so far.

Dead Cells, which debuted in 2017 and is also available for consoles and PC, is not an easy game. You play as a warrior raised from the dead, battling your way through dungeon mazes. Along the way, you collect weapons, cells, which can be used to upgrade your weapons, and other items. When you die, you lose any unused cells and some of the items you’ve collected. However, other upgrades are permanent and remain intact between sessions. Combined with levels that are partially procedurally generated and provide variety between attempts to defeat enemies, the mechanic creates a fun tension that makes Dead Cells extremely hard to put down.

I was initially skeptical when I heard Dead Cells was coming to iOS. The game’s mechanics work well with a controller, but with jumping, dodging, fighting, using collected items as well as other mechanics, I wondered how well it would translate to mobile. As it turns out, Playdigious has done a fantastic job bringing Dead Cells to touchscreen devices. I’ve tried the game on my iPhone XS Max, iPad mini, and iPad Pro and enjoyed it on every platform; I especially appreciate that progress is synced between all of my iOS devices. Dead Cells really shines on the iPad Pro’s big screen and I prefer to use a controller over touchscreen controls, but not to a degree that I won’t play the game on smaller devices or without a controller.

Dead Cells succeeds as a mobile game for a couple of reasons. The first is that the touch controls are flexible. By default the control stick floats on the left side of the screen, but players can fix its position instead. There are also options to swipe-to-dodge and for adjusting the size and position of controls. I’ve found that the default set of controls suits me, but the option to adapt them to individuals’ preferences goes a long way toward making Dead Cells an excellent mobile experience. Also, UI elements that were at the bottom of the screen in console and PC versions of Dead Cells have been moved to the top of the screen, out of the way of your thumbs.

The second reason the game works on mobile is an all-new mode called Auto-Hit that automates melee attacks on nearby enemies. I was pleasantly surprised at how fun Auto-Hit mode is. Combat is a big part of Dead Cells, but so is exploration and collecting items, and Auto-Hit mode helps eliminate the frustration of playing such a complex game on a mobile device. It’s not the mode I use most often, but it is an excellent alternative when a controller is not nearby.

As I mentioned though, my preferred way of playing Dead Cells is on my 12.9-inch iPad Pro with a controller. The game looks amazing on the iPad Pro’s big screen and even without headphones, the sound from the iPad’s four speakers enhances the experience substantially.

Dead Cells is available on the App Store for a special launch price of $7.99.