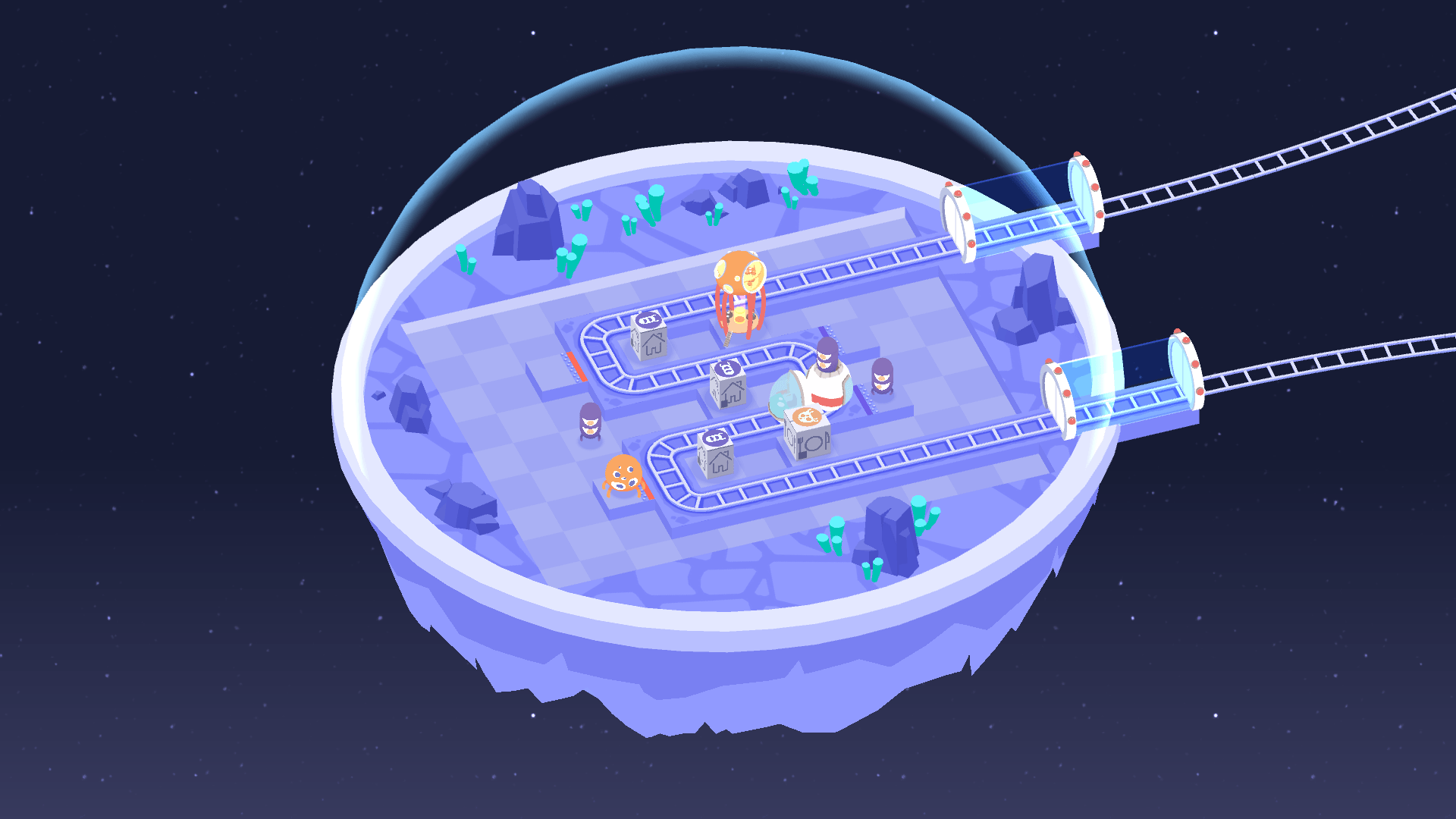 The first game review I ever wrote on MacStories was for a delightful puzzle game called A Good Snowman is Hard to Build. The team behind Snowman is back with a new game called Cosmic Express that brings toy-like charm to this challenging puzzle game through playful animation, bright colors, and sound design that perfectly complements the artwork.

For the past several years a group of game developers has boarded the California Zephyr train in Chicago for Train Jam, a 52-hour journey to San Francisco for the annual Game Developer Conference. Train Jam is an opportunity for game developers to meet each other and spend the long trip building new games. In 2015, Alan Hazelden participated in Train Jam and built Train Braining, which became the basis for Cosmic Express.

If you’ve played Snowman, you’ll immediately notice that Cosmic Express has a very different look. That’s because this time around Hazelden and developer Benjamin Davis teamed up with 3D artist Tyu of the French collective Klondike. The result is a landscape viewed from an isometric perspective that serves as a beautiful backdrop for the game’s puzzles.

Cosmic Express is organized into celestial bodies like Andromeda and Ursa Minor, each of which includes multiple puzzles. As you progress through the game, new levels emerge that branch off from the ones you have already completed. Get far enough, and you can progress to entirely new areas. It’s a nice touch that makes the game feel manageable. Instead of a list of dozens of locked puzzles, you see just a handful at a time, which adds a sense of discovery and anticipation.

Your job is to lay down train tracks with your finger picking a path that allows your train to reach the exit after picking up and dropping off all of the aliens along the way. Perhaps it’s the toy-like design that lulled me into expecting simple puzzles or the fact that the goal is so simple, but Cosmic Express’ puzzles are tricky and require thoughtful planning to plot the right course. What makes finding the correct solution challenging is that the tracks you lay cannot intersect. You are also constrained by the bounds of the grid layout of each puzzle as well as the aliens, homes, and other obstacles on each grid. As the game progresses, new elements, like the ability to carry multiple passengers and holes that serve as shortcuts between parts of the track are introduced adding further complexity.

Cosmic Express looks great on an iPad or iPhone. It helps that you can pinch to zoom in and pan around the environment on smaller devices to get a closer look. I also appreciate that Cosmic Express syncs your progress among iOS devices.

The artwork and sound design of Cosmic Express are a great complement to the puzzles. Together, the elements complete a well-designed whole that is engrossing and fun. Instead of feeling an urgency to complete a level and move on to the next challenge, I found myself slowing down, thinking through each puzzle carefully and then experimenting to see what worked, enjoying the animations with each attempt. That sort of careful study eventually pays off as you start to see patterns that form strategies for how to beat later puzzles. Yet, just as you think you’ve figured it out, Cosmic Express throws a new curveball at you that keeps things interesting and makes Cosmic Express a game worth playing.

Cosmic Express is available on the App Store.