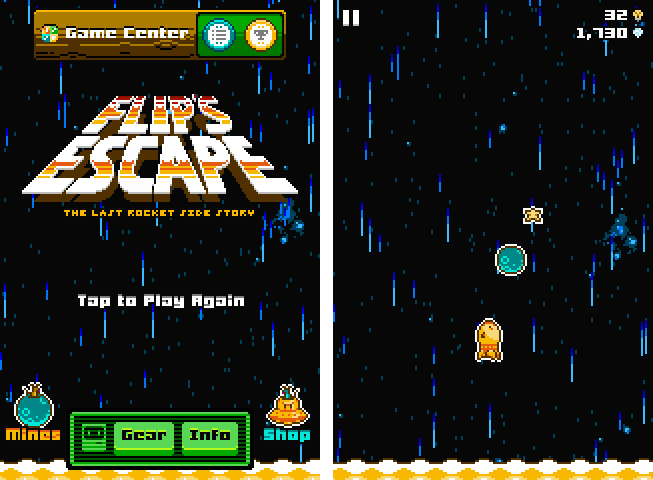 Last week, Shaun Inman (creator of the popular statistics and RSS server software Mint and Fever)’s newest game, Flip’s Escape, got approved by Apple. It ties in with the loose storyline of The Last Rocket after escaping from the collapsing factory. Flip, the rocket you play the game as, needs to flee from the shockwave which resulted from a large explosion. At the same time Flip has to avoid colliding with asteroids during his epic escape.

Gameplay is simple and easy to understand. Flip automatically flies horizontally across the screen, bouncing off the sides of the display. The shockwave is endangering him at his back. To prevent Flip from colliding with an asteroids as the rocket flies back and forth across the screen, you have to tap and hold on the display to slam on the brakes. With the brakes applied Flip stops in place, and can safely let the asteroid pass without being destroyed. However, when you apply the bakes too often in a short period of time you run the risk of having the shockwave catch up to you. So you need to strategically hit the brakes in short bursts to avoid asteroids and still be able to outrun the shockwave.

Flip’s Escape is a classic highscore game, just like Canabalt or The Incident. The goal is to fly through space for as long as possible to beat your own (or your friend’s) highscores. To keep the gameplay varied and interesting, you also collect stars rotating around the asteroids and gems (diamonds) during Flip’s escape. When collecting a star, the ‘Star Meter’, displayed above the flying Flip, increases. Slamming the brakes decreases the Star Meter, as well as moving forward for long periods of time without collecting more stars. When the Star Meter turns orange, Flip blinks blue and orange, and can survive one asteroid collision. 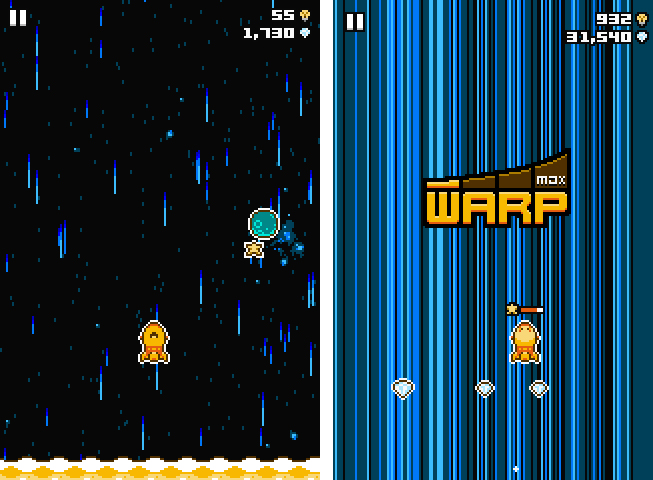 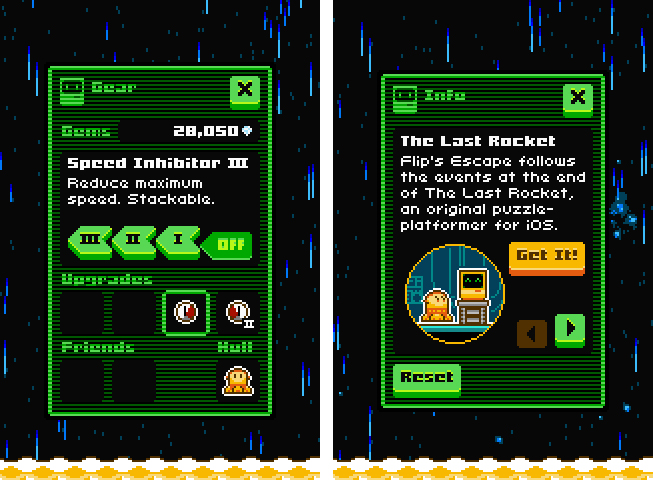 With gems you can purchase a variety of cool power-ups in the game’s in-app store. These extras are divided up into four categories: consumable gear (of which you can purchase up to three at a time), rocket upgrades, friends, and different hulls to give Flip a new look. The two consumable gears are a Nose Cone Drill to enable Flip to destroy one asteroid without a filled Star Meter, and a magnet that attracts up to 5 missed stars. These extras are pretty inexpensive, so you can use them often to make gameplay easier. The rocket upgrades, namely being speed increases and decreases,  are available as three-times-upgradable purchases. By tapping the gear on the launch screen you can modify Flip afterwards to provide him the exact maximum and minimum speed you’d like to play the game with. The friends you can buy are called The Fare and The Trailer. They are very expensive (50000 and 100000 gems respectively), but they are for a good reason: they help you get more gems in a shorter period of time. They are the perfect companions to have for saving up for the most expensive gear available: the hulls. In order to style Flip in new costumes using the hulls, you really need to be a hardcore player; the two available ones, Cactus Hull and Ninja Hull, cost 200000 and 300000 gems respectively. 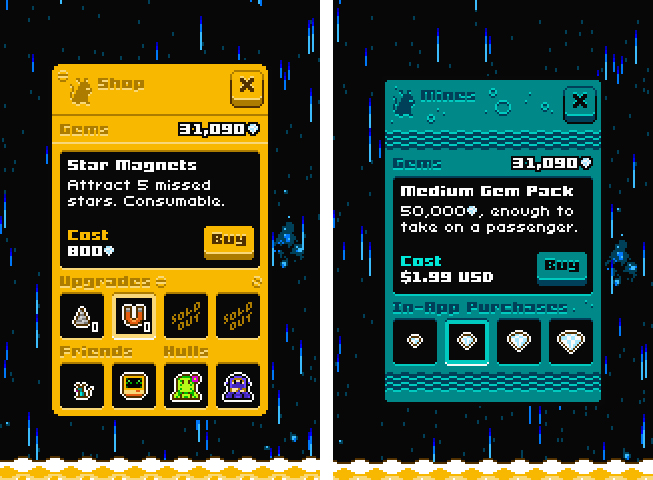 Cool power-ups and extensive Game Center integration, which supports both various achievements and global leaderboards, make up the game’s immense addiction factor. If you’re impatient, the high prices for cool gear in the game’s shop can be acquired via another feature: via in-app purchase. During the last few months, the concept of the IAP has had a lot of critics all over the Apple community (our Graham also wrote a long piece about its pros and cons). But Shaun Inman did everything right with the implementation of IAPs in Flip’s Escape. You can buy different amounts of gems using another store titled “Mines” for relatively little money in order to buy gems so that you can purchase the in-game gear you want more quickly. The required amounts of gems required to buy in-game items are also possible to reach by playing Flip’s Escape a bit more often, so the IAPs don’t affect the game’s fun factor. The gameplay mechanics are fair — collecting lots of gems isn’t difficult or particularly tasking. The IAP is more of a possibility for impatient gamers to more quickly acquire expensive items in the in-game store. More importantly, you do not gain any advantage over other players when you purchase gems via an IAP.

Now that I am finally through with discussing the game mechanics, let’s move on to an even cooler part: the graphics and sound. In all of his games, Shaun Inman has developed a unique, immediately recognizable style of game design, which reaches new highs in Flip’s Escape. In my opinion, the game is best suited to the iPhone, not just concerning its gameplay, but also when it comes to graphics. Even on my older iPod touch, a device without a Retina display, the graphics look (not are) better than on my new iPad. I think this is the case since single elements like the asteroids, the blinking stars, and even Flip are designed as tiny sprites. If you scale them onto a larger display, there is a lot more unused screen space around them, making them look disproportionally small. 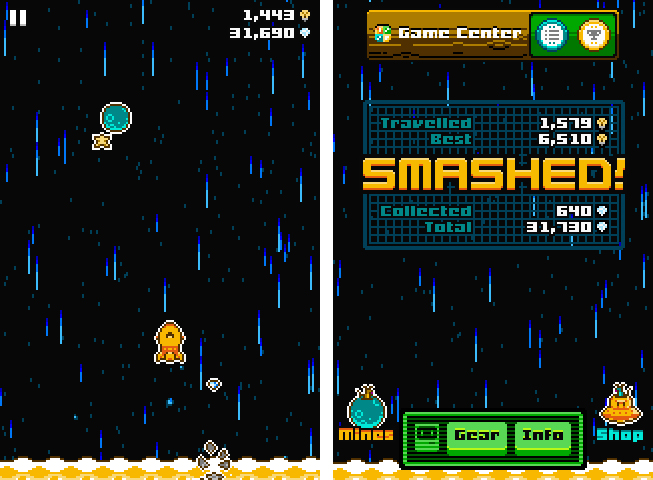 Apart from that issue, the game still is a great example for awesome looking pixel game art. And not just related to the sprites in game, but also menu elements, especially the buttons, are designed perfectly, right down to the last detail. Oh, and let me not forget that there is that soundtrack. Written and produced by the talented Matt Grimm, this is the most catchy game soundtrack I’ve come across for a while. I sometimes even caught myself at humming it while playing the game.

Concluding, I can only say that Flip’s Escape is an awesome sequel to The Last Rocket; in my opinion it’s even better. I am totally addicted to it. It’s easy to understand, but very hard to master — you really need time and patience to get good at it. It features very good graphics design, a cool and unique game concept, although it is a simple high score-based casual game. The game is a very elaborate package of casual gaming fun that can be picked up and played anywhere. I highly urge you to try it out for yourself.