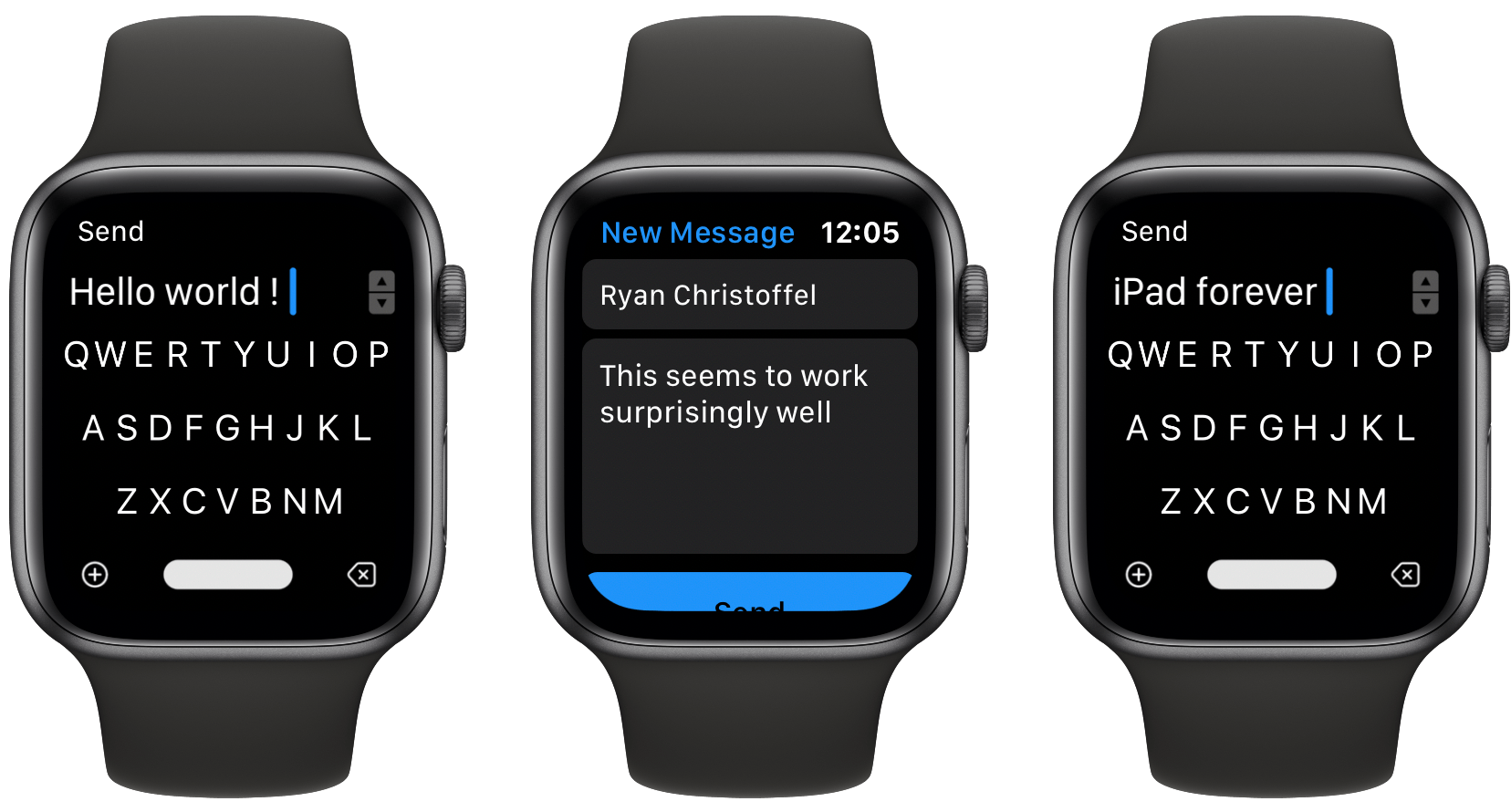 The Apple Watch is steadily moving toward full independence from the iPhone. Making cellular an option, adding new apps at a healthy pace, and enabling apps to be downloaded and run independent of an iPhone are all crucial steps toward the device becoming entirely untethered. I have a cellular Apple Watch and go running with it each week without bringing my iPhone along, and it works great. I’ve even gone to a couple of doctor’s appointments with only my Watch, and the list of things I miss my phone for in those cases is now minimal.

One time the device still falls flat, however, is when I need to send a message. Scribble is too slow for more than a word or two, dictation is hit-or-miss, and canned responses aren’t good enough for most situations. FlickType Keyboard sets out to solve this problem, and entirely succeeds.

FlickType offers a full keyboard typing experience on the wrist that works remarkably well. The FlickType Keyboard app is designed for typing out messages, which are then sent using Apple’s Messages app. The flow from typing in FlickType to then hitting Send, choosing your recipient, and finding yourself in the Messages app is smooth and seamless; it feels like you’re just using one app the whole time.

Tapping out messages in FlickType is extremely fast because the app uses a QWERTY layout, so your finger already knows where every key is. Behind the scenes, the app does a lot of work to figure out which letter you’re intending to tap, then strings those letters together to form the word it believes you wrote. In my testing, FlickType did an excellent job deciphering what I wanted to say. For those times when it fails, however, you can simply scroll with the Digital Crown to cycle through alternative words. Or, if a word is altogether botched and needs re-typing, just hitting the backspace key once will clear the whole prior word. Occasionally this backspace behavior is annoying, but most of the time it’s exactly what I want.

The only drawback to FlickType’s keyboard is that it’s letters only, with no numbers or punctuation marks accessible. Fortunately, the app offers a couple workarounds for this drawback. For numbers, you can hit the + button in the lower-left corner of the screen to find watchOS’ familiar communication options, one of which is Scribble, where you can draw a quick number and have it added to your current draft. This works for punctuation too, but an easier method involves hitting the spacebar twice, which adds a period, and if you want to change that period to a comma, question mark, or some other punctuation, you can simply scroll with the Digital Crown. Turning the Digital Crown in this scenario also presents options of emoji you can append to your message.

You may have heard the name FlickType before, because it’s actually been integrated into other third-party Watch apps like Chirp, the full-featured Twitter client. The makers of the app also have created a FlickType Notes app, which works just like FlickType Keyboard, but it’s designed for creating notes that sync with an iPhone companion app rather than writing messages. FlickType works so well, I really hope Apple reconsiders baking a full keyboard into watchOS.

When I have my iPhone with me, I’m unlikely to ever write out a message on my wrist, but for all the times I’m phone-free, FlickType is by far the best way to write a message. Unlike all of the alternatives built into watchOS, FlickType is reliable, fast, and enables me to write things with great precision. None of Apple’s alternatives – dictation, Scribble, or canned responses – can check all of those boxes. And while FlickType’s keyboard can’t be directly integrated with, for example, an incoming Messages notification, it’s easy to dismiss that notification, tap the FlickType complication on my watch face, and knock out a quick response.

I use a 44mm Series 5 Apple Watch, so it’s possible users with smaller Watch displays may not find FlickType quite as effective. I’d be surprised if that’s true, however, because I’m also tall and therefore have fingers that cover lots of the Watch’s display surface. My guess is that FlickType will work for you no matter your screen size.

If you ever need to send messages from your wrist, FlickType Keyboard is the way to do it.