When the Apple Watch first debuted, it would have been absolutely impossible to deliver a full Twitter client on the wrist. For a while, Twitter itself offered a first-party Watch app with a limited browsing experience, but that app was eventually discontinued. With the Apple Watch’s advancements since that time, however, in both hardware and software, including the recent debut of SwiftUI for watchOS development, there’s never been a better time for a new wave of powerful Watch apps to debut.

Browsing the timeline (left), and searching for and viewing a user profile (right).

When I say that Chirp offers an iOS-level full-featured Twitter experience, I’m not kidding. Look at everything the app lets you do:

Much of this functionality was available in previous versions of Chirp, but it fell short in several ways, such as videos not playing reliably, DMs being unable to display images or linked tweets, or everything just loading slowly. For version 2.0, all of the app’s previous low-hanging fruit has been addressed, enabling Chirp to truly fulfill its vision of being a full-featured Twitter client. And it’s remarkable how well Twitter works on the wrist.

The biggest under-the-hood change in Chirp is that the timeline was completely rewritten for watchOS 6 using SwiftUI. Bishop outlined his first SwiftUI experiences in a recent Club MacStories interview:

I’ll admit, I was quite sceptical at first. I’d never used a declarative language outside of HTML, so it all seemed quite foreign to me…But as I used it more and more I began to see its potential, and decided to lean right into it to rewrite the largest part of Chirp. This new timeline brings some new features that weren’t possible before too, such as endless scrolling.

SwiftUI not only enabled endless scrolling, it also made the whole timeline more responsive and reliable. For example, memory issues that Bishop ran into with the former timeline implementation were solved thanks to SwiftUI. These improvements don’t just fuel the timeline either, because the same approach was applied to almost every other part of the app: Mentions, Likes, Trending, Hashtags, Lists, and Search all use the SwiftUI implementation.

As you browse your timeline, you can like and retweet anything you come across with a single tap. Tweets in the timeline can now display up to four images at once in a grid, just like on other devices’ Twitter apps. Amazingly, links can be accessed and read in a stripped-down view; videos, likewise, can be played right from a tweet view. The latter feature had reliability issues in previous versions, but it’s been completely rewritten for much better performance.

If you want to compose a tweet, you can do that by first using Force Touch from nearly any screen in the app, then choosing from a variety of input options, including the excellent FlickType keyboard which works surprisingly well on my 44mm Watch. Tapping on a tweet enables the option of replying, but quote tweets, as far as I can tell, can’t be created with Chirp, which is the only noteworthy limitation I’ve found. 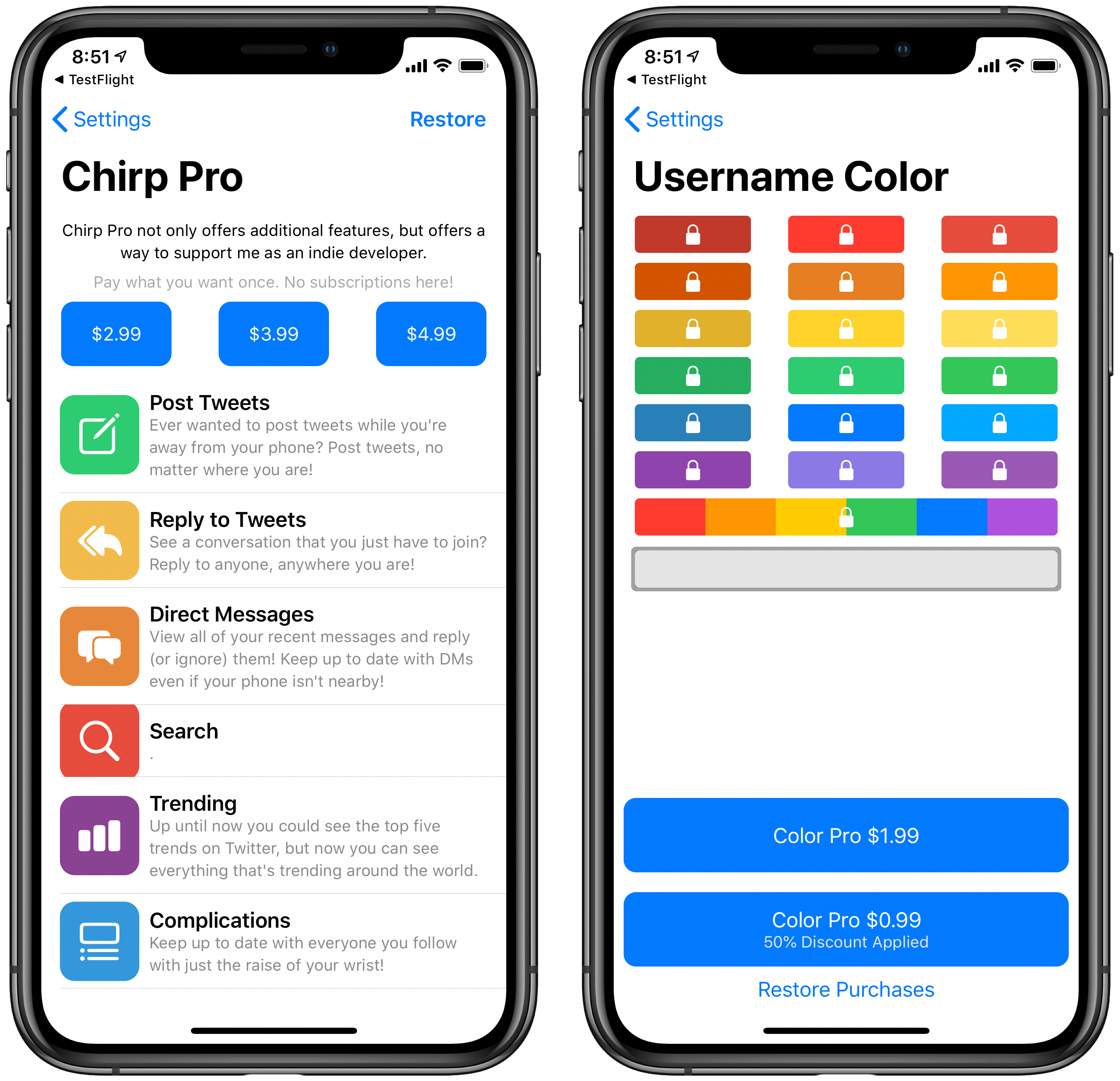 Chirp is a free download, with certain features unlocked via In-App Purchases.

Chirp 2.0 also adds a username colors feature, whereby you can set a custom color for your username to appear in the timeline. This custom color displays not just for yourself, but for all other Chirp users, so if you browse the timeline and come across a user’s rainbow-colored username, or some other custom color, you’ll know they use Chirp.

I won’t pretend that Chirp is a replacement for a proper iOS Twitter client, because I’d choose Twitter on my iPhone or iPad over the Watch any time I can. But for those moments when I don’t have another device on me, it’s incredible that full Twitter access now lives on my wrist.

What Will Bishop has accomplished with Chirp is strong proof that now is the perfect time for developers to give the Apple Watch a second look. With more capable hardware than ever, truly independent apps, and the advent of SwiftUI, many of the limitations of years past are gone. It’s time to reimagine what a Watch app can be.

Chirp for Twitter is available on the App Store.