In spite of iOS devices having good support for song lyrics in Apple’s Music app and the Mac surely not lacking access to song information with iTunes and a variety of third-party apps, until last week I didn’t have a quick and effortless way to check on the lyrics of the songs I was listening to through my setup. The problem with lyrics, in fact, is that whilst iTunes allows you to import them and have them properly synced to an iPhone or iPad, those of you who, like me, have decided to shift their listening habits to streaming services like Rdio and Spotify might be out of luck when it comes to humming along the latest Coldplay hit.

Being all about access, services like Rdio and Spotify (and MOG and Deezer, to name a few alternatives) often forgo the need of having a “complete package” for the music you’re paying a monthly fee for, focusing on streaming and leaving additional information like artists’ bio, photos, videos and, yes, lyrics as second citizens on the feature checklist. Which may be regarded as a rather anachronistic choice, considering the interconnectedness these web-based services offer through APIs, web apps and add-ons. Probably also because of lyric rights being treated differently from music streaming rights by labels and publishers, services like Rdio still don’t provide users with an integrated way to check on the lyrics of the song (or entire album) they’re streaming.

The flourishing of streaming services and their obvious lack of lyrics integration has lead, I believe, to a decent if not considerable increase in Google queries for lyrics websites, which are many, often ugly, yet still the best option you’ve got if you want to know what a song is saying. These websites are generally crammed with ads, ringtone adverts, and a plethora of additional information most users looking for the latest Adele single won’t ever need. These websites are awful to navigate. The fact that a Google suggestion for “lyrics website without ads” even exists is telling.

For the reasons listed above, and because I’ve been on a Rdio collection-and-playlist building spree lately, last week I set out to find the simplest iPhone, iPad and Mac apps to give me lyrics for the songs I listen to every day. My requirements were pretty basic:

As it turns out, I’ve only found three apps that might work for me in the long term. As I tweeted yesterday, the big player in the iOS music-recognition scene, Shazam, doesn’t offer the same amount of functionality of its popular iPhone app (I use Encore) in its iPad client, which is surprisingly poor and limited. You’d expect Shazam to have some kind of deal or API integration with Spotify and Rdio (and, again, possibly others), but they don’t. Shazam offers a “Play on Spotify” command, but to me it looks like they’re missing big time on the music streaming front by only providing access to microphone recognition and manual search. The same is true for Shazam’s biggest competitor, SoundHound; I could be wrong about the API offered to developers by the likes of Spotify and Rdio, but I’m firmly convinced these companies should figure out a solution together if they want to reach the millions of users that are increasingly streaming music, and want to know more about it. Still, both Shazam Encore and SoundHound (universal app) offer basic lyrics support with manual searches; the third app I’ve installed is a very simple utility called Instalyrics, which is a paid app that works on the Mac and iOS with integration between the two.

Here’s a quick look at how these three apps provide lyric access.

Very simple in that it allows you to look up the lyrics for a tagged song, or start your own search from the Discover tab. Shazam’s lyrics page comes with lyrics (obviously), album artwork, writer and copyright information, and a mention of the lyrics provider (often LyricFind). The Discover tab allows you to manually search for lyrics following these steps: 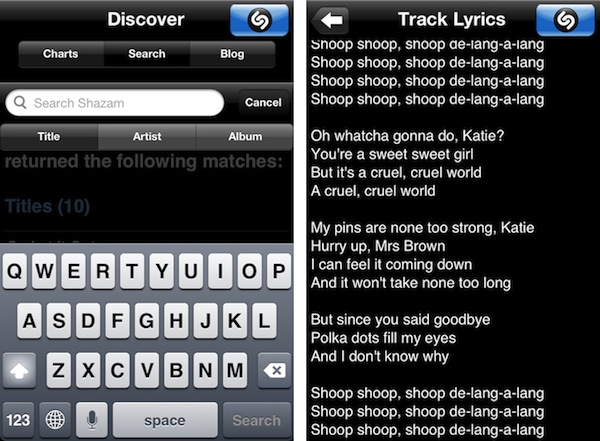 Shazam’s process could be streamlined, but it works well with tagged songs and gets the job done if you’re searching manually. Like I said above, it’s too bad Shazam isn’t offering “Discover” on the iPad and hasn’t found a way to integrate with the two big streaming players, Rdio and Spotify.

I use SoundHound (paid version) mainly on my iPad because I like how videos and related artist information are laid out through a bigger interface, but the functionalities of the services are the same across iOS devices. SoundHound comes with two options for lyrics: LiveLyrics and manual search. The latter is pretty common stuff and works similarly to Shazam, although it feels less immediate than Shazam to get to your desired destination. To get lyrics manually in SoundHound you have to: 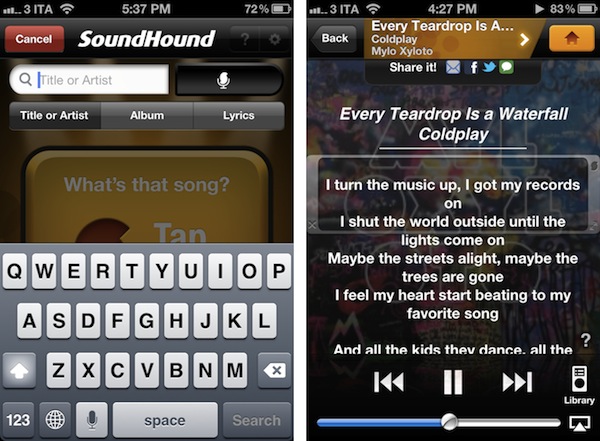 SoundHound’s lyrics page comes with white text on top of an album artwork background, which might get a little confusing for some users. SoundHound also displays sharing buttons (including one for Messages), Songwriters and Publishers information at the bottom of the page.

Where it all gets really interesting is LiveLyrics. Available on all iOS devices, this feature allows SoundHound to load information for a song that’s currently playing in the Music app, fetch its lyrics, and display them in real-time on screen. Where by real-time I mean that SoundHound’s lyrics really follow a song, and you can even double-tap a line to go back to it and listen to the lyrics again. It works very well, and it makes you wonder what could SoundHound do with support for software other than Apple’s Music app. Shazam has a similar functionality called LyricPlay, but it only works for songs you’ve tagged and it doesn’t let you load your own songs from the Library. SoundHound’s interface may look a little chaotic, but its lyrics offerings are fairly solid.

Instalyrics is an interesting alternative to the manual searching of Shazam and SoundHound – if you’re willing to accept the aforementioned ugliness of lyrics websites. Instalyrics, in fact, both on the Mac and iOS, doesn’t display lyrics “inline” with the rest of the app. On the Mac, you could say Instalyrics isn’t even a visible app at all. On the iPhone and iPad (app is universal), Instalyrics automatically fetches the name of the song that’s playing in Music.app and opens a new Safari tab with that song’s lyrics through one of the websites the app supports, such as SongLyrics. You can think of Instalyrics as a “launcher” for lyrics websites rather than a comprehensive guide to your favorite tunes, but that’s no shame if you ask me: I’d take Instalyrics’ simple approach and Safari integration over manually browsing those websites any day. And remember, Safari Reader remains a great way to read lyrics from cluttered websites with your iOS device. 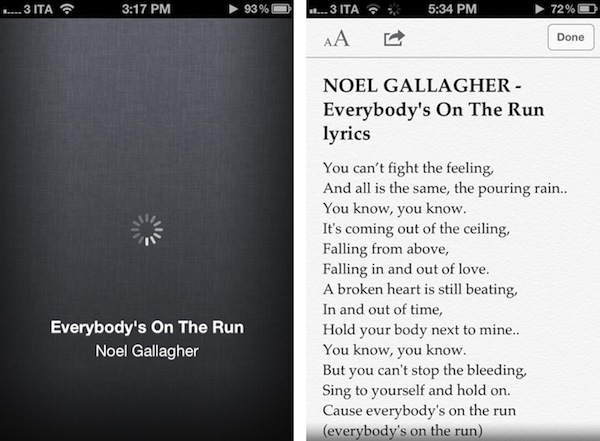 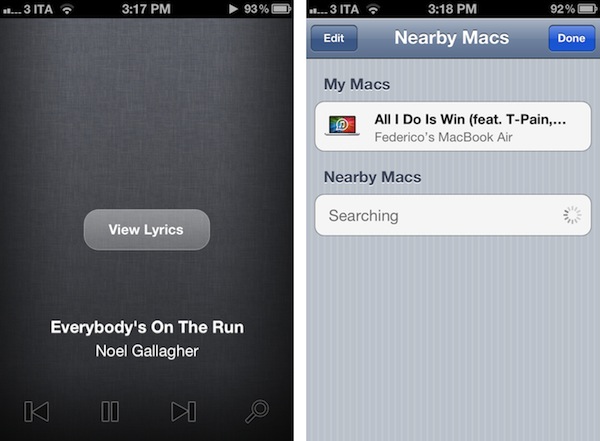 I wouldn’t mention Instalyrics if it didn’t have a clever feature that SoundHound and Shazam lack. Besides a search box on iOS (for when nothing is playing in Music.app), Instalyrics can wirelessly connect to its Mac counterpart, which is capable of fetching song information from the following services and apps:

You know where this is going. Instalyrics for Mac lives in the menubar and constantly checks for what’s playing on your Mac, giving the priority to iTunes when two music sources are active (such as iTunes + Rdio or iTunes + YouTube). You can click on its icon to open a new Safari tab with the song’s lyrics – or you can pair your iOS device with your Mac, and have an iPhone or iPad fetch lyrics from Rdio, Spotify and all those other supported apps and websites. It’s pretty fantastic, but I do have a minor gripe about the system: Instalyrics only supports opening new tabs in Safari, which means Chrome or Firefox users are out of luck. The developer told me this is necessary because of Safari’s unique same-tab refreshing capabilities (indeed, if you leave your app playing music, Instalyrics reloads new lyrics in the same tab, even if it’s a different lyrics website), but I still think there should be an option to trigger new tabs in Chrome on demand (e.g. a user’s click on the menubar icon). However, I can live with Safari open in the background with a single tab refreshing my Rdio lyrics.

If you don’t mind reading lyrics in Safari and you’re intrigued by the Mac version of Instalyrics, I highly recommend the purchase of both apps (iOS version is $1.99). Like I said, Safari Reader is your friend when it comes to ugly lyrics websites.

Finding and organizing lyrics for your favorite songs has never been a fun task to perform on computers, and with the rise of mobile devices and streaming services the job has become even more complex when lyrics aren’t integrated directly in your app of choice. I’m sure developers can always do better and, who knows, perhaps even Apple is working on its own solution to fetch lyrics automatically; in the meantime, you should take a look at the three apps mentioned above.