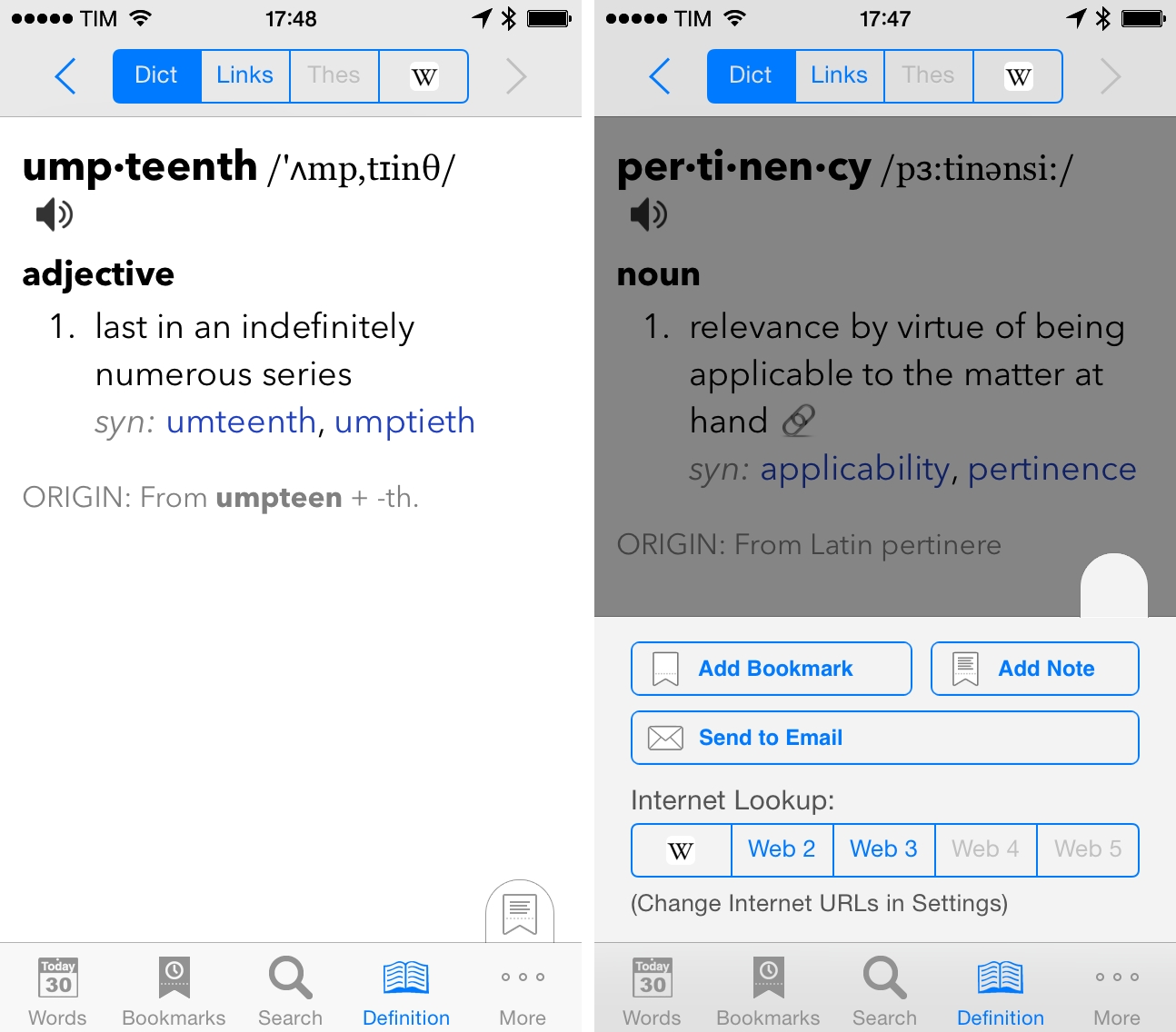 I was recently looking for a dictionary app that could handle standard dictionary features (thesaurus, synonyms, web lookups, etc) as well as user notes for words, and I decided to check out WordBook after reader Jeff Clatworthy recommended it to me on Twitter. As I mentioned last night on The Prompt, WordBook isn’t the prettiest app around, but it does exactly what I need for definitions and notes.

Because English isn’t my first language, I often want to associate Italian expressions with English words to remember the context of a definition – for instance, I would associate “for the umpteenth time” with “per l’ennesima volta” in Italian, which makes it easier for me to remember the word “umpteenth”. Surprisingly, I wasn’t able to find a dictionary app with this kind of feature (Terminology, my favorite one, doesn’t have one) and, of course, Apple’s built-in dictionary lookup functionality on iOS is limited to the basics. WordBook has an option to add notes to words and, in trying the app, I also found other features that I like.

WordBook is an English dictionary and thesaurus with hundreds of thousands of entries and definitions with support for synonyms, usage samples, and etymologies. The latter is a great addition that isn’t always available in dictionary apps for iOS: since I studied Latin and Ancient Greek in high school, I’ve developed an interest for knowing word origins, but I’m obviously limited when it comes to English etymologies. WordBook shows an “Origin” blurb under word definitions with a brief description of the etymology. In WordBook, every word on the screen is tappable, so you can tap on a synonym or words in the etymology text and be taken to other definitions. It’s a great way to discover new words and their origins, but it’s not as visual (or intuitive) as apps like Wordflex.

The definition screen has large text and is easy to scan. WordBook displays word kind, links to synonyms, and it’s got tabs at the top to switch between dictionary, links, and thesaurus modes. Like Terminology, the app has a web lookup feature: using an @ character as a placeholder for the current word, you can open websites like Google Search or Wikipedia to look for a definition. WordBook doesn’t officially support this implementation, but you can use app URL schemes instead of website URLs to send definitions to other apps. 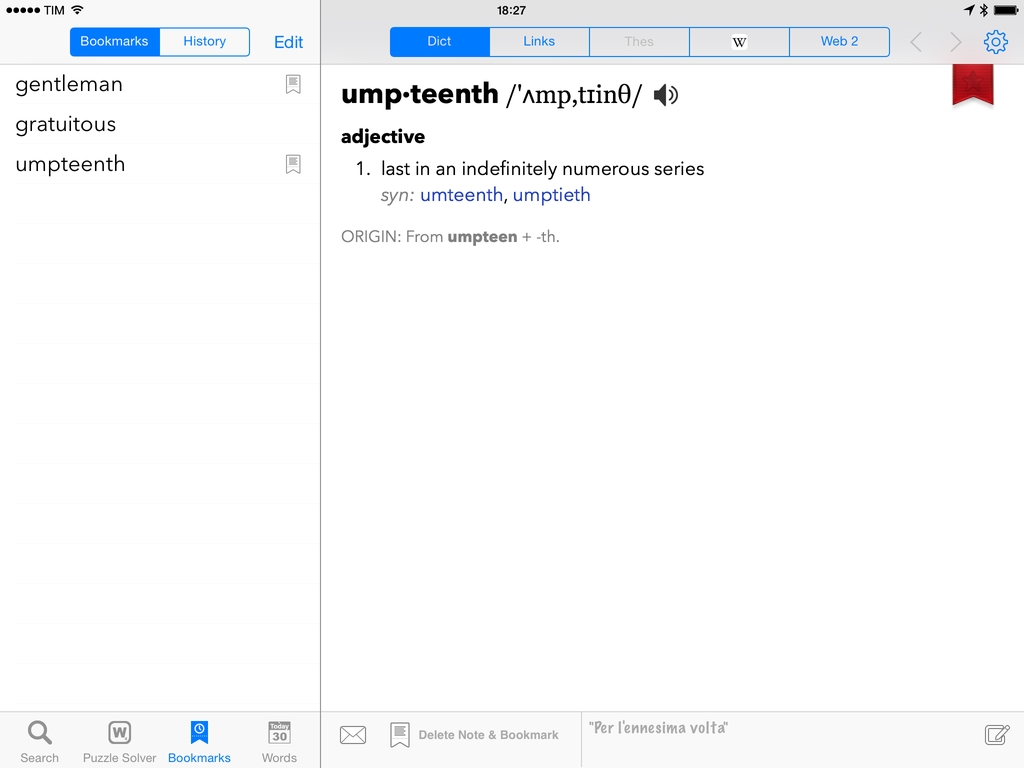 WordBook has real audio snippets for pronunciations recorded with actual human beings instead of computer voices. In the Settings, you can use a notation (defult is IPA), and choose between two human voices (Sue and Alex) and a synthesized one (Cindy). The quality is impressive, and, for people like me, professional-recorded pronunciations with clear audio are a invaluable tool to better learn the spoken English language. Audio snippets are quickly downloaded from the Internet when you tap the audio icon (it takes about a second), and the default one, Sue, is crystal clear and human. When combined with the Word of the Day section, WordBook becomes a fun way to learn new words, their definitions, and how to pronunce them. 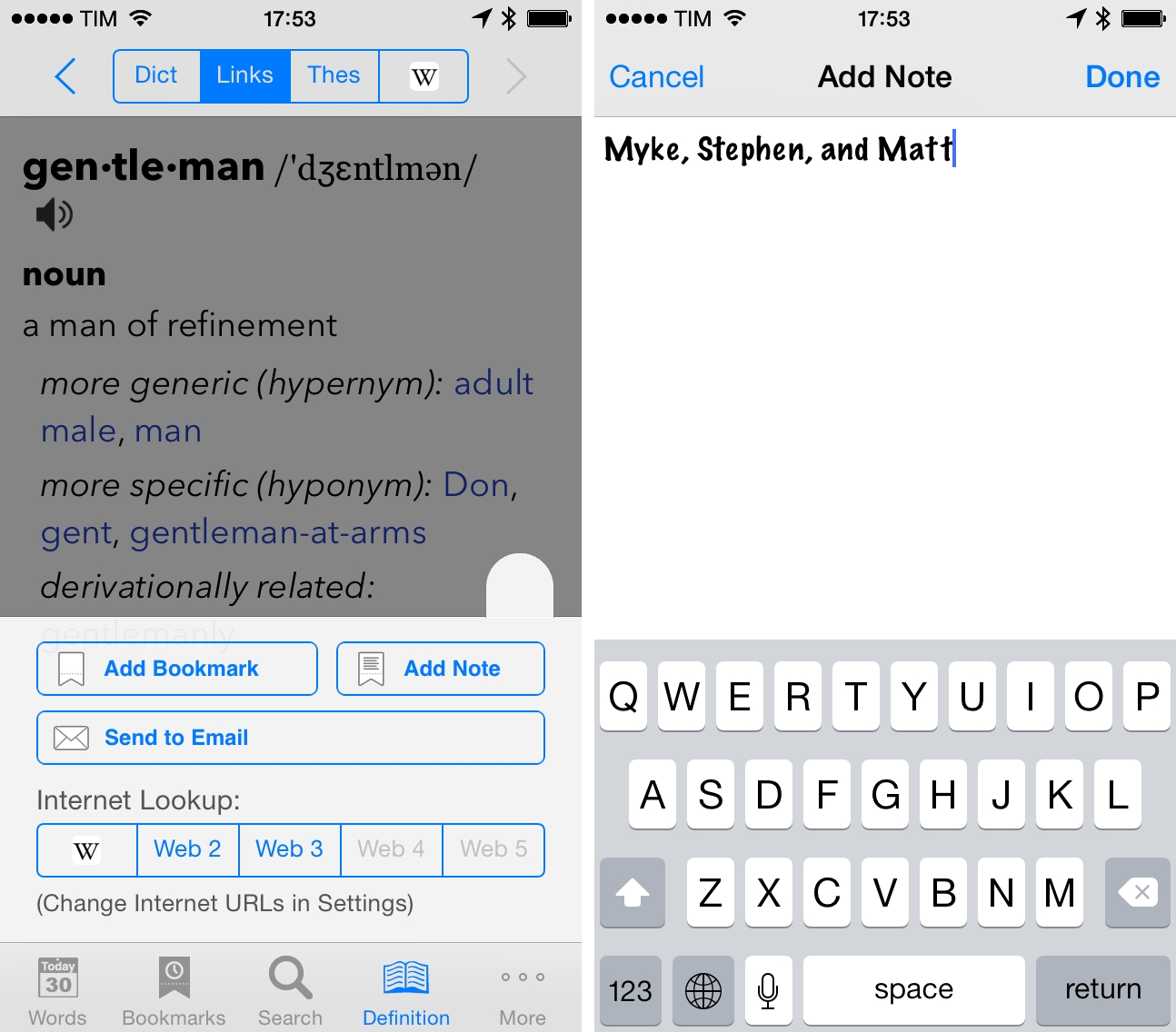 The feature I installed WordBook for, notes, sits at the bottom of the screen in a popup panel that can be activated by tapping the “dog ear” button (on iPhone; on the iPad, there’s a simple toolbar). From the panel, you can access Internet lookup, send a word via email, save it in the bookmarks, and add a personal note. Alas, notes are rendered with what looks to be Marker Felt (seriously?) and they don’t support clickable URLs or cross-linking to other words. Still, this is enough for my needs: whenever I find a word that I want to annotate, I can bookmark it, add a note, and everything will sync over iCloud across my devices.

WordBook could be improved in several areas of the interface: I’d like to see the developer getting rid of the last bits of skeuomorphism left in the app (there’s some linen here and there, and the icon doesn’t look good on iOS 7), and it’d be nice to have more voice choices and a URL scheme to quickly send words to look up. Overall, WordBook is useful for what I need (notes and audio), it has solid word discovery features, and the Universal version is just $2.99 on the App Store with no In-App Purchases or other paid extras.