Elk is a new app that aims to make currency conversion fast and simple. Designed for travelers, Elk is available on both Apple Watch and iPhone, and on both platforms it is extremely easy to use.

On the Apple Watch, Elk consists of a single screen (apart from the Settings menu) where several interaction methods are employed to quickly, easily handle currency conversion. A yellow-orange number represents the amount you want to convert to another currency, and immediately below that is another number that represents the result of the conversion. So if you’re converting euros to dollars, the euro number would be on top, with the equivalent number in dollars just beneath it.

There are two gestures used to handle currency conversion on the Watch: you can tap on a number and scroll the Digital Crown to change it, and you can also swipe left or right on the screen to add or remove a zero from the end of the number. Both gestures feel natural and they’re easy to remember. And the app is responsive enough that every change you make is registered instantly. 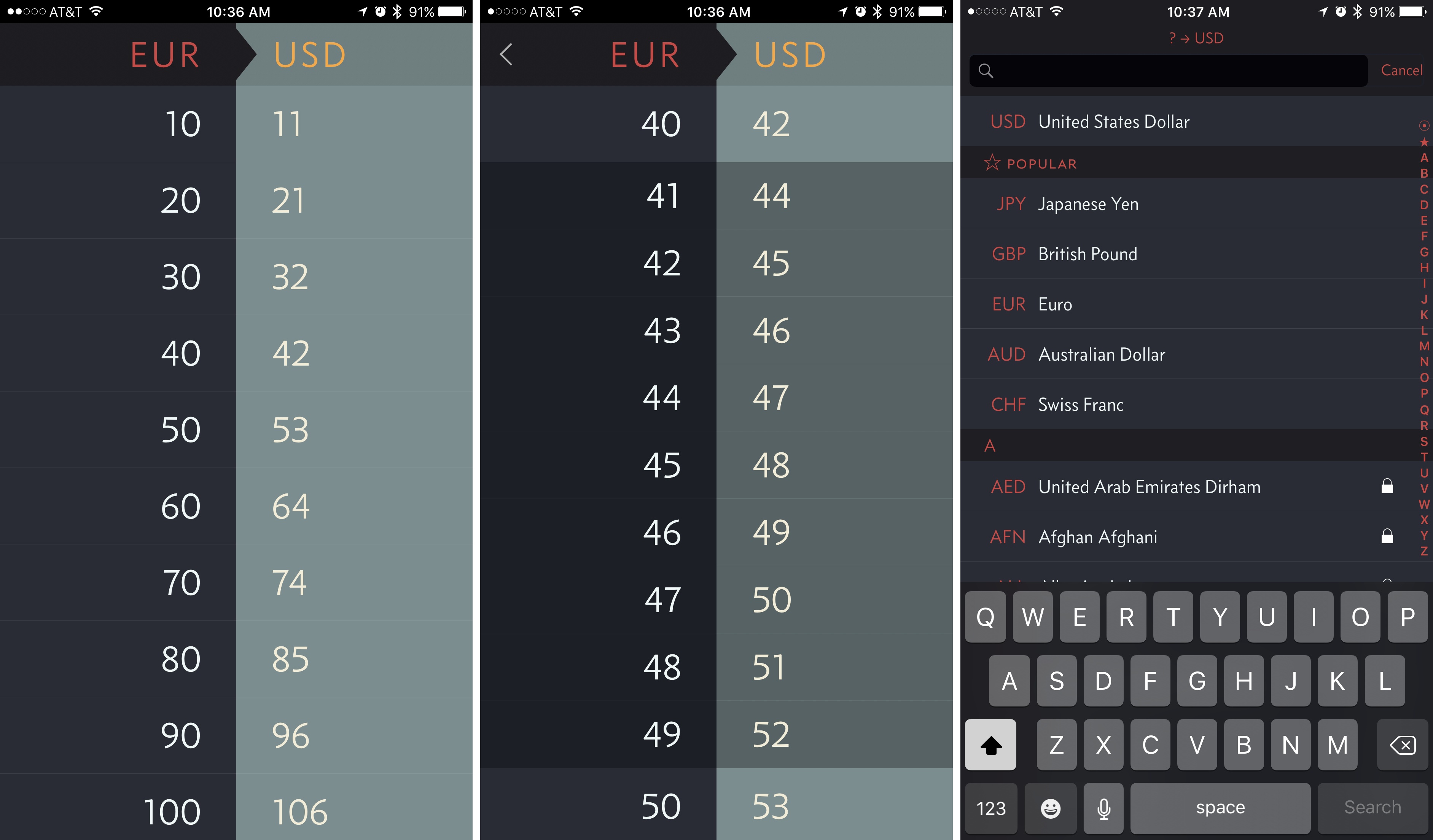 On the iPhone, Elk is just as simple. Launching the app will present two lists of numbers. On the left is your starting currency, and on the right is the currency you’re converting it to. Like on the Watch, swiping left or right will add or remove a zero from the end of your starting currency. If you’re using an iPhone 7 or 7 Plus, this horizontal swipe is aided by the clever use of haptic feedback, which makes for a pleasant experience.

Since there’s no Digital Crown on the iPhone, drilling down to more precise numbers is done by tapping one of the listed numbers to expand it. For example, if your left column has listings that count by ten – 30, 40, 50, etc. – then tapping on the 30 will show all the numbers that come between 30 and 40.

The only drawback to Elk’s approach of handling currency conversion without a number pad is that in some cases it may be difficult to get as precise a number as you’d like for the starting currency. On the Watch, for example, there is no way to add a decimal point for calculating fractions of a unit. On the iPhone, if you’re converting larger numbers, you may have to do a couple different conversions if you need precision in a column as small as the tens place. In real-world situations, maybe that level of exact precision isn’t needed too often, but it’s a drawback worth noting.

Elk comes with a huge number of currency options, so you’re likely to find the currency you’re looking for. One feature I appreciate is that the Apple Watch and iPhone apps will sync your current selected currencies, so if you change currencies on one device, the other device will do the same.

Currency conversion is a task that has been greatly simplified by the presence of smart devices on us at all times. Elk provides an easy, elegant way to accomplish this task in a well-polished package. I don’t often travel internationally, but the next time I do I’ll be using Elk.

Elk is available as a free download on the App Store, and a $3.99 In-App Purchase will unlock all currencies and the option to use custom rates.