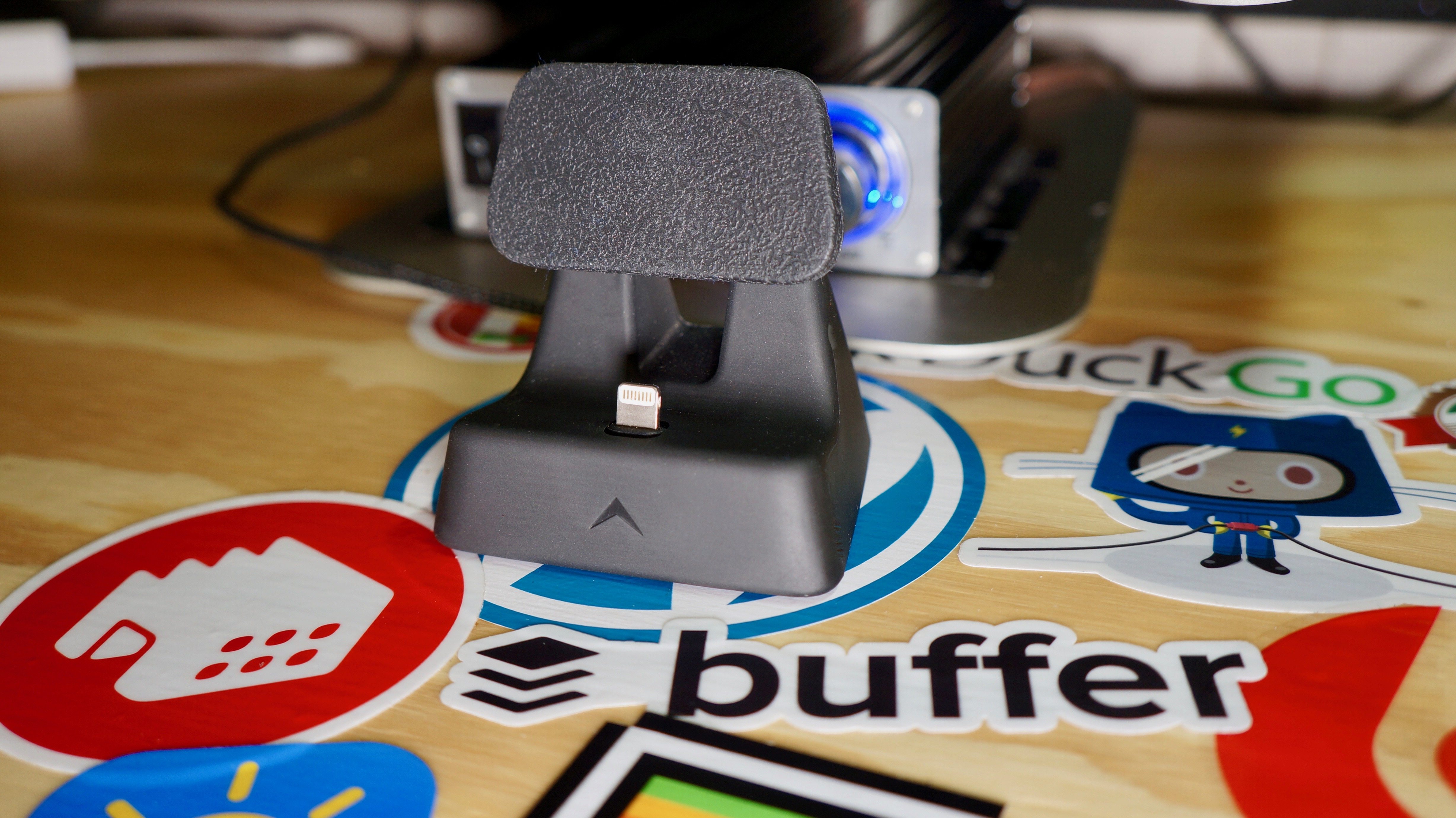 The ElevationDock 4 is an unassuming collection of smart design decisions that together make it my favorite iPhone dock. The device, which comes in black or white, performs well as a place to charge my iPhone, which isn’t remarkable by itself. What distinguishes the ElevationDock though, is the little touches that combine to make it more useful than other docks.

My biggest complaint with most docks I’ve tried is that it’s often too hard to get my iPhone in and out of them. The ElevationDock solves this problem in two ways.

First, the dock is adjustable with two steel thumb screws that protrude from the back. The top one adjusts the pad that supports the back of your iPhone. Turning the screw moves the pad forward and back to accommodate cases. Similarly, the bottom screw adjusts how far the Lightning connector sticks out of the base of the dock. The Lightning connector also flexes a little, which has meant that I’ve never felt like I was in danger of damaging it or port on my phone.

Second, the bottom of the ElevationDock has two types of micro-suction pads that grip a wide variety of surfaces. The pad is tacky to the touch but doesn’t leave residue and remains grippy even after moving the dock around repeatedly. The result is a surprisingly firm bond between the dock and the surface on which it sits. Along with the precise fit, the result is a dock that is easy to place my iPhone in, but even more important, just as easy to remove one-handed. 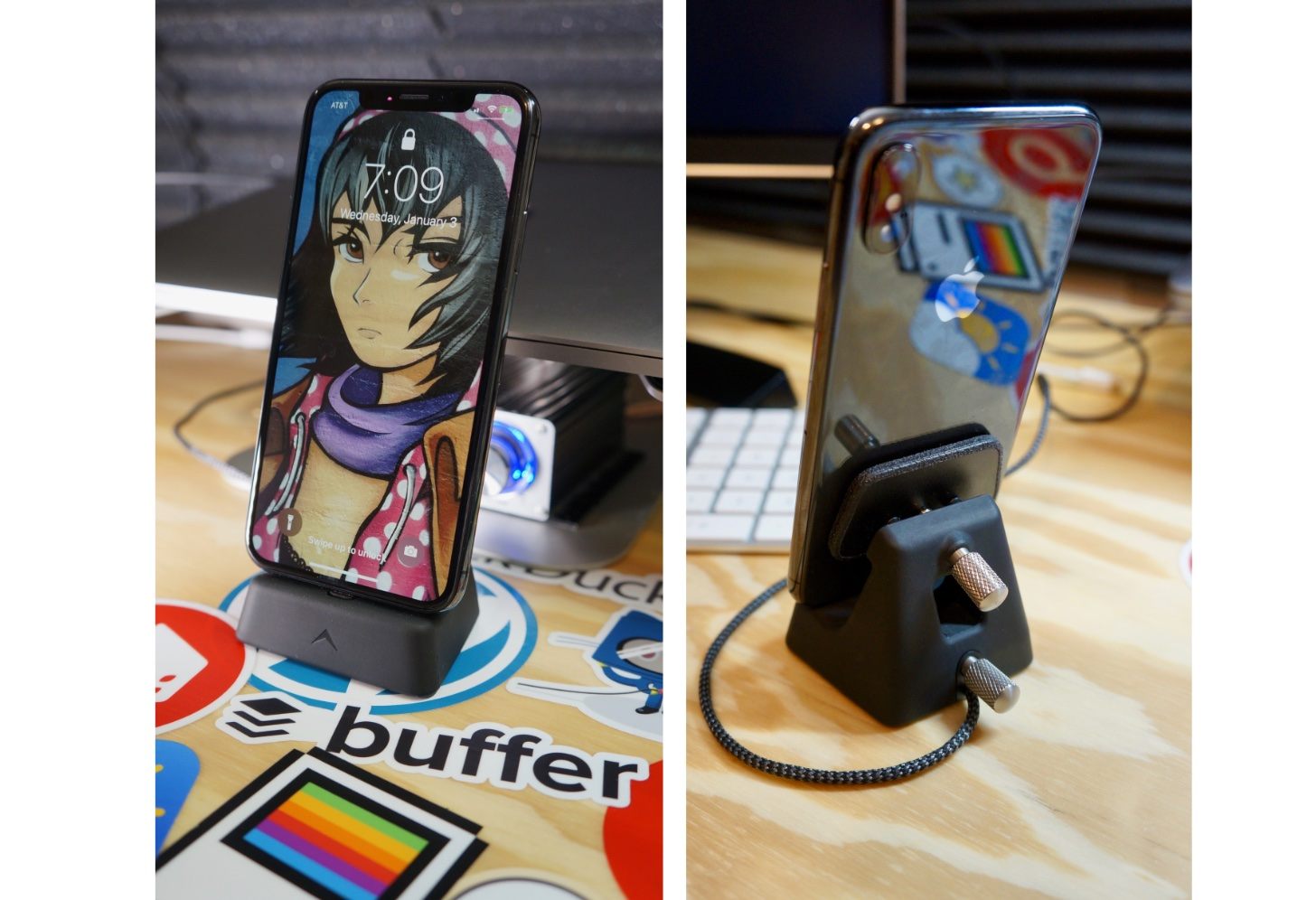 The one-handed operation of the ElevationDock alone puts it ahead of most of its competition, but there are other nice touches too. The entire dock is coated with a soft-touch silicone that prevents it from scratching your iPhone. Also, the Lightning to USB-A cable is wrapped in a nylon braided sheath similar to many Anker cables, which should make it hold up better long-term than a standard-issue Lightning cable from Apple. ElevationLabs says you can use its dock for iPads too, but at least with the 12.9-inch iPad Pro, the combination seemed too top-heavy, so I’m only using it with my iPhone X.

The most unexpected advantage I’ve found though, is the angle at which my iPhone sits in the ElevationDock. It’s tilted back at an 18-degree angle, which makes it perfect for viewing when I’m at my desk. It also provides a good view of my face, so Face ID can unlock my iPhone X when I tap to wake it up. That’s made my iPhone a handy second screen for keeping track of notifications while I work. The dock’s angle works well on a nightstand or kitchen counter too. 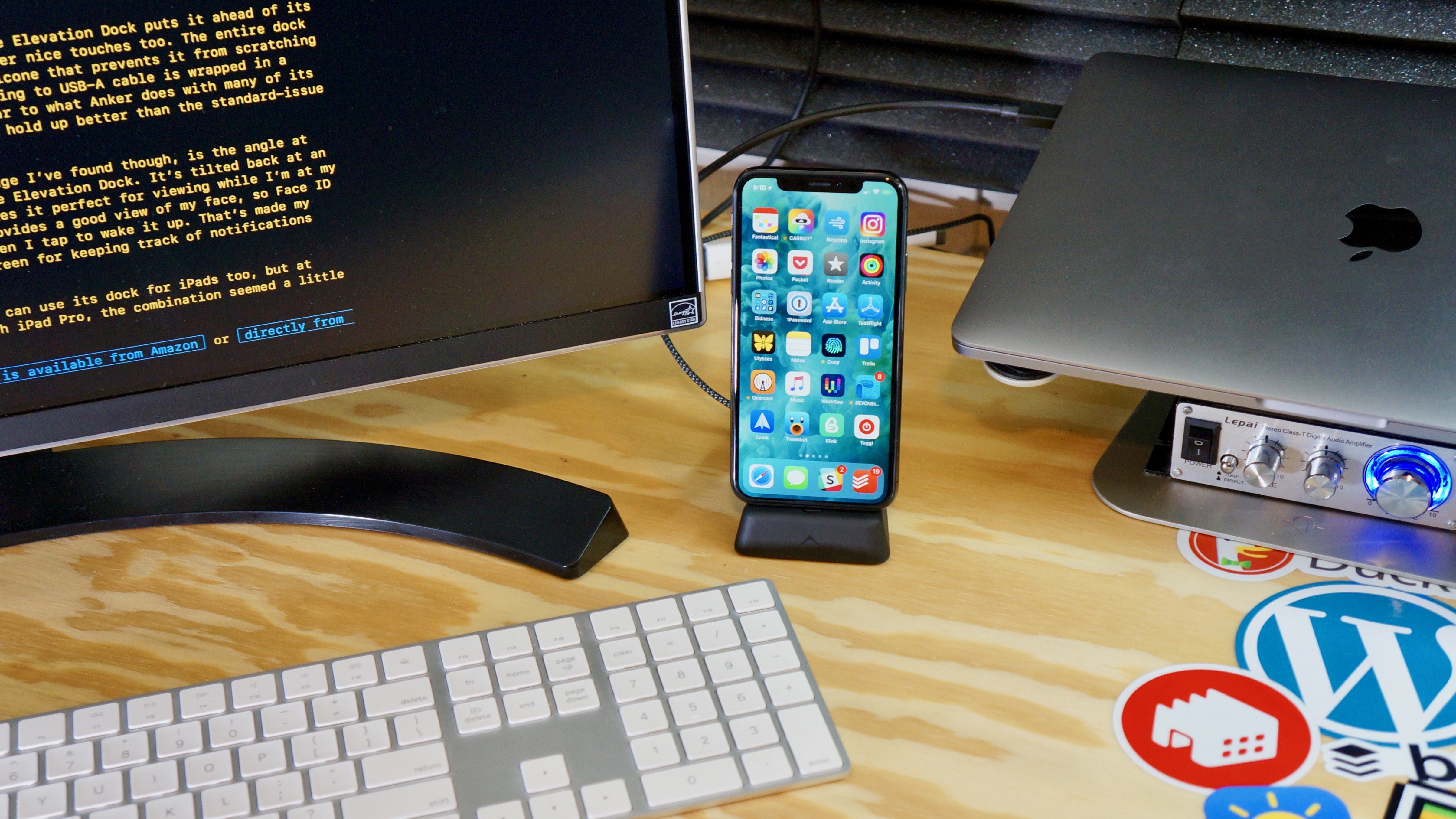 At around $59, the ElevationDock is about $20 more than Apple’s iPhone Lightning Dock, but far more versatile, which makes it my favorite among the docks I’ve tried. If you’re looking for an elegant docking solution for your iPhone, the ElevationDock 4 is an excellent choice.

The ElevationDock 4 is available from Amazon or directly from ElevationLabs.