If you followed the latest MacHeist nanoBundle 2 happenings, you should know that Loren Brichter (atebits) teamed up with the MacHeist team to a) include Tweetie for Mac in the bundle and b) offer the possibility to enter the beta of Tweetie 2 as soon as it will be out. This thing alone made the MacHeist double their sales in two days. As you can guess, Tweetie 2 for Mac is one of the most anticipated apps of 2010, and the user base is literally going crazy to put their hands on Loren’s newest creation. But on the other hand, there are many users who got tired of waiting months and months to have a Twitter client which supported - say - native retweets and lists, so they changed their default application from Tweetie to another one. And in most cases, the “another one” is Echofon for Mac.

I never tried Echofon before, but I decided to give it a spin after all this talking about the Mac version being good, stable and faster than Tweetie. Let’s see what the kid’s got.

One thing you’ll immediately notice about Echofon, is its clean interface. White is the main color in the twitter stream, icons are located in the top toolbar and have a minimal approach, there are no additional elements cluttering the UI, at least in the default view. To set up a new account in Echofon, you’ll have to enter the Preferences (pretty much like Tweetie) and sign in with your username and password. After a successfull login you’ll be able to customize almost everything out of the behaviour the app should have with the newly created account: wanna turn on Growl notifications for mentions? Sure you can. What about badge dock icon for DMs and Lists? You can do that as well, if you want. From the same account screen in the prefs you can enable the sync with Echofon, which should basically keep the read tweets actually “read” between the Mac and iPhone client; guess what, this is one of the most wanted features in Tweetie 2 for Mac. From the preferences you can also change font and image size, adjust the refresh interval (1 minute is just great for me), choose what position Echofon should have when new tweets arrive (auto scroll to top or mantain position? For me it’s mantain), send tweets on ⌘ + Return (again, like Tweetie) and open links in the background. Playing around with the advanced settings you can also sign in with your bit.ly account (works great with bitly.pro too) and use SLL for all requests, though it might be a little slower. 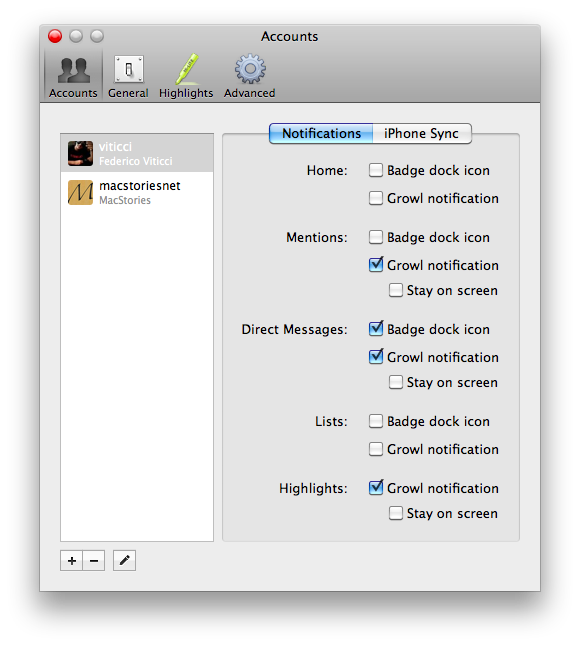 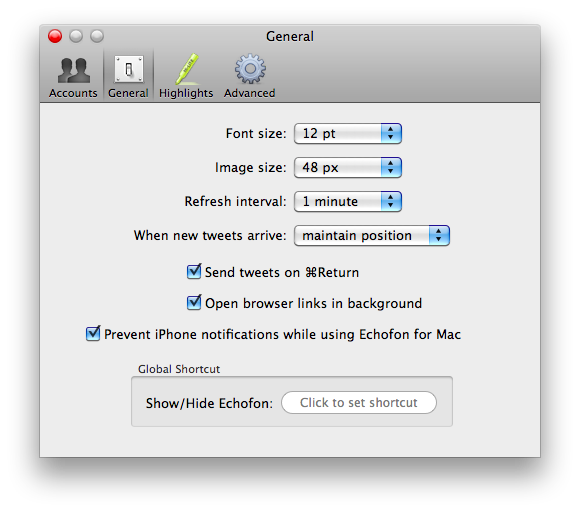 As you can see, the Preferences of Echofon are massive, but what about the Twitter experience itself?

Echofon comes with a lot of features, but there are some caveats that kept me away from using it and returning to Tweetie everytime. Let me mention them straight up so we can talk about the good stuff later: first, you can’t repost (or “quote”) tweets the way Tweetie lets you do. By repost I mean the old style retweets, those with (via @) and the new /via @ syntax. Tweetie 2 for iPhone lets you quote tweets with the /via syntax, Tweetie for Mac supports only the (via) one, but it’s easily adjustable by just deleting two brackets and inserting a slash. Echofon doesn’t have all of this: if you choose “retweet with comment” from the on-tweet contextual menu (right click on a message) the new tweet field will be filled with a “RT @” message. Seriously? At least, give us the option to choose, like Tweetie 2 for iPhone does - I personally can’t stand the RT @ tweets. 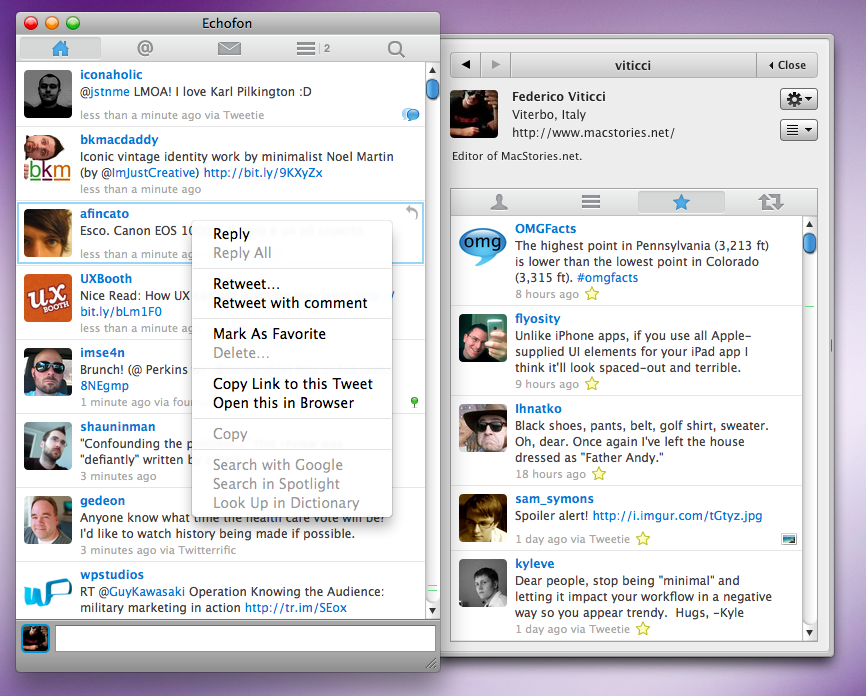 The other thing I don’t like is more aesthetic than functional, but I’m pretty sure many other people have found this same problem: too much white in the timeline sometimes kills my eyes. Tweets seems to melt together, I can’t distinguish between read and unread tweets (though there’s a light blue highlight color) and, overall, I think a bubble-like interfaces a là Tweetie would have been better. Take a look at the screenshots below: which one is more “readable” and consistent to your eyes? 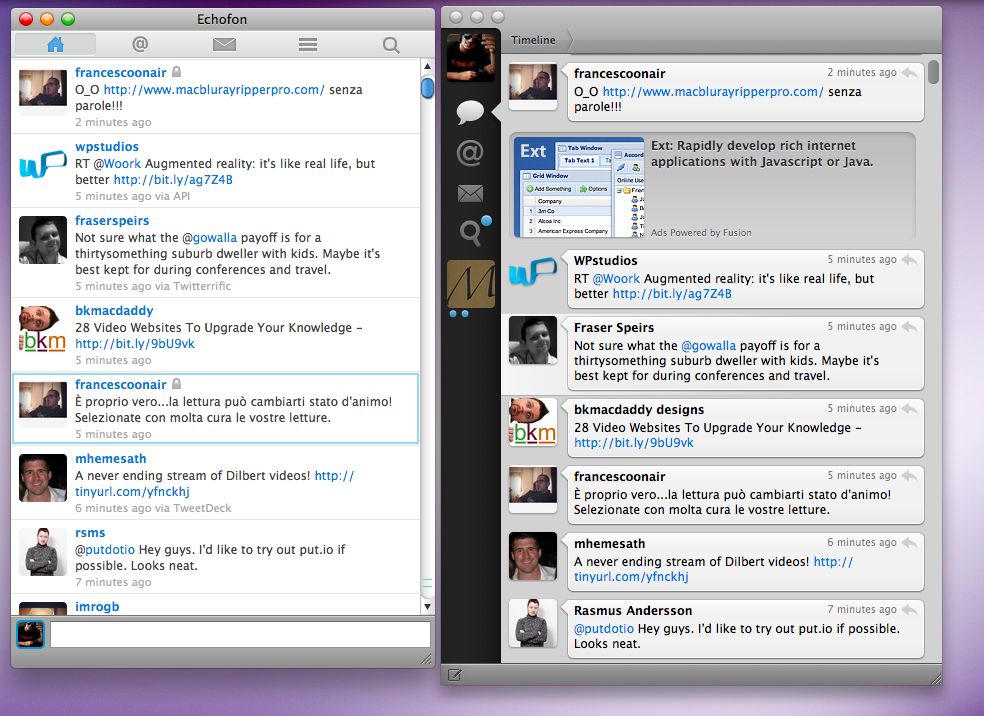 That said, Echofon is a damn good client, which allows you to perform almost anything you could ever ask for. Inline images, favorites, user profiles: it’s all there, packed in a single interface. Sending a new tweet is completely different from Loren’s app, as instead of having a separate window to do so, there’s a bottom text field, next to your profile picture. And this leads to me to the support for multiple accounts, which is well implemented. You don’t see all the accounts you’ve set up like in you-know-which-application, but you can switch between them with a simple keyboard shortcut. Also, clicking on the aforementioned profile picture in the text field lets you send a tweet with another account. Speaking of keyboard shortcuts, there are plenty of them, to accomplish a huge variety of actions. You can fave tweets, mark as read, open URLs and lot more with keyboard shortcuts: this, combined with a 3rd party utility like BetterTouchTool, makes Echofon a winner for keyboard support and menu extensibility. 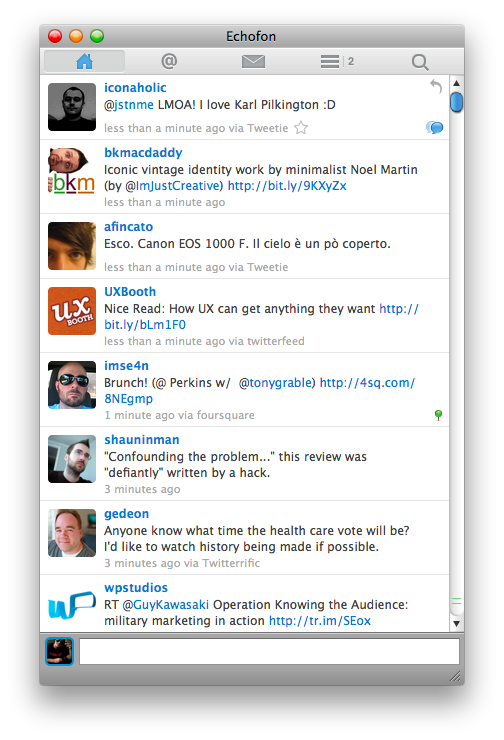 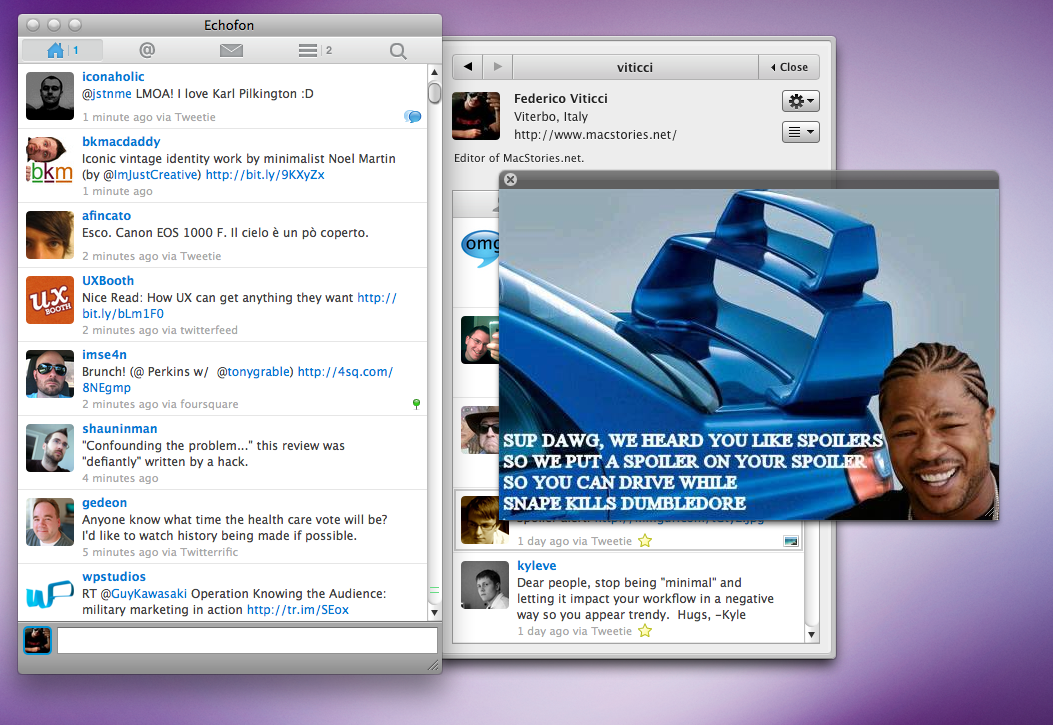 Back to the timeline, tweets / mentions / messages / search are divided in different tabs like you’re probably used to, but there’s the addiction of lists here. You can indeed change lists with just a few clicks by opening a dropdown menu and clicking on the “i” next to the list gives you the ability to toggle the drawer and see information about the list like who created it and how many people it’s following. The drawer is probably one of the most important features of Echofon, as it changes accordingly to what you’re doing, the information you need and the context. Just as you can use the drawer to get some info about a list, you can use it to jump to a user’s profile: here you can see his total number of tweets, followers and people he follows, the bio and web link, faves, retweets and full size profile picture. As for pictures,Echofon uses the same black translucent window of Tweetie 2, but the animations are way faster. Images render in a matter of a few seconds, and I guess that’s because Echofon has an overall better engine than Tweetie 1.x, as you can also see from the way it refreshes tweets. 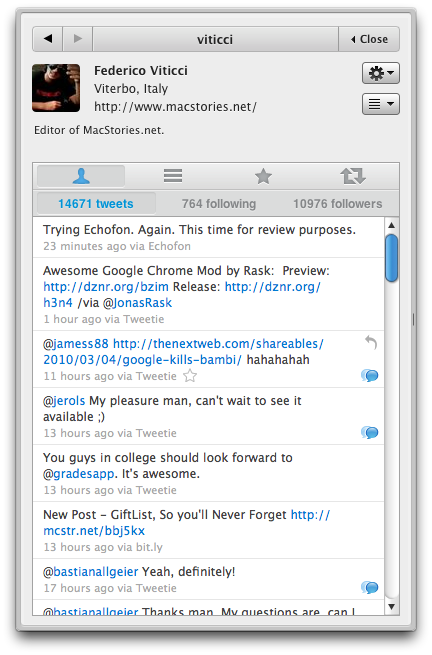 The drawer is also used to show conversation between users, but the realization is poor and ugly looking. Clicking on the bubble icon next to a tweet indeed opens the conversation drawer, but instead of presenting tweets as the timeline does, a weird and inconsistent speech bubble style is adopted, thus breaking all the white-clean minimalist thing we got used to see in the timeline. Seriously, what’s that - please change it guys. 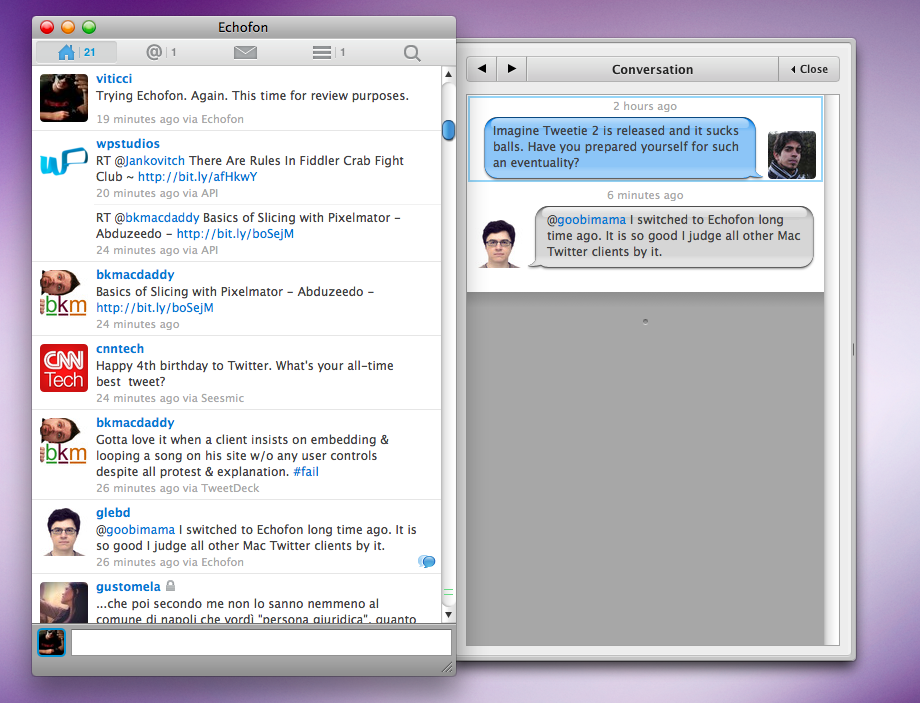 Like I said, Echofon is a very good desktop client, and - most of all - it’s very promising considering how much it’s supported by the developers. Sure it needs some interfaces fixes and adjustments, but I think that from a feature standpoint, it’s ok. Echofon for Mac is free, dubbed as “Beta” and you can download it here. Probably you won’t uninstall Tweetie, but it’s good to try something new every once in a while, isn’t it?