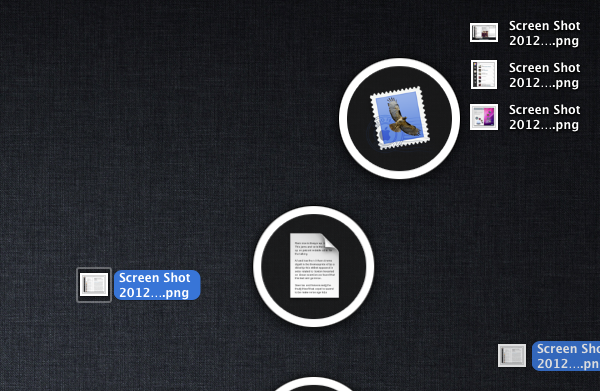 Back in November when I took a look at the Mac App Store release of Aptonic’s Dropzone, I was impressed by how the utility transitioned to the Mac App Store whilst keeping most of its functionalities intact. Through a simple drag & drop interface, Dropzone allows you to save time on common and oft-repeated tasks such as sharing images and bits of text, uploading files to your FTP server, or moving files from one location on your Mac to another.

With Dropzone 2.0, released today on the Mac App Store, Aptonic has been inspired by Path’s radial menu (introduced in version 2.0 of the app) and created a new drag & drop interface based on Circles, which as the name suggests are circular icons that sport pretty much the same animation seen in Path 2.0 for iPhone. I don’t know if the new Circles system is more intuitive than the old dock/menubar-based grid of icons (as a Dropzone user myself, I’ll have to see how Circles works in daily usage and if the feature doesn’t get in the way), but it sure looks very nice. Aptonic has also put together an HTML5 demo of Circles, available here.

Dropzone 2.0 comes with other features and improvements as well:

Like I said, I’ll have to keep on using the new Dropzone to see whether the new Circles interface can grow on me. I love the custom sharing menu in Path, but I don’t know yet if the same approach can work for file management and the various shortcuts I have set up in Dropzone. To celebrate the launch of version 2.0, Dropzone will be available at $9.99 until February 5th.