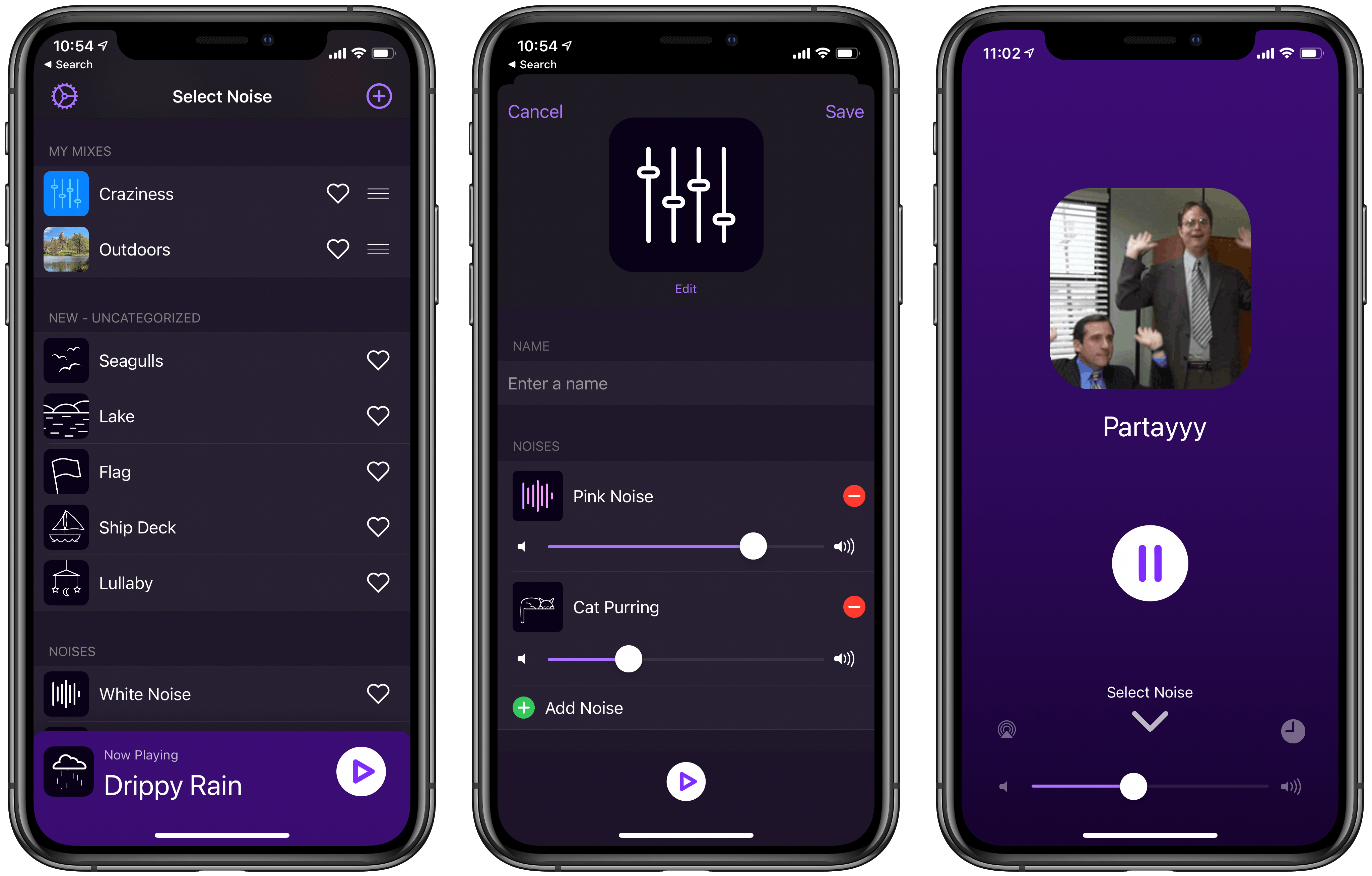 Last summer developer Charlie Chapman launched Dark Noise, an ambient noise app for iPhone and iPad that’s packed with delightful design details and key system integrations. My initial review praised how Chapman was able to take an otherwise standard utility app and build a standout experience which, from day one, raised itself above a crowded market of competitors.

The main reasons I loved Dark Noise from the start had little to do with the app’s basic utility: playing ambient noise. The app has always had a good selection of noise options, but nothing in the sound department made it truly special to me. It was the other areas of the app experience, everything surrounding that basic utility of ambient noise playing, that was so great. Icon animations, buttery smooth panel transitions, haptic feedback, strong iPad support, alternate app icons, Shortcuts support, a customizable widget, and more all made for a compelling product.

One of my only disappointments with Dark Noise was the inability to mix different noises together. Each noise could only be played in isolation, never more than one at a time, which proved a disadvantage compared to other ambient noise apps I’d used that enabled mixing different noises to create a custom soundscape. I’m happy to say that Dark Noise 2, released today, adds this functionality at last.

In Dark Noise 2 not only can you mix different sounds to create custom noises, but there are also eight new sound options to choose from, iCloud sync has been added for syncing your favorite sounds and custom mixes, and there’s optimized support for the iPadOS cursor. It’s a big release that retains the design elegance Dark Noise has had from day one, but expands the app’s usefulness in key ways.

To get started creating a sound mix, simply tap the plus button in the top-right corner of the sound list. From here, you’re asked to set the mix’s name, add noises to it, and optionally customize its icon.

If there’s a limit to the number of sounds you can add to a custom mix, I haven’t been able to reach it yet in my testing, but I know you can add at least 10. You can even add multiple versions of the same sound for an interesting mix. 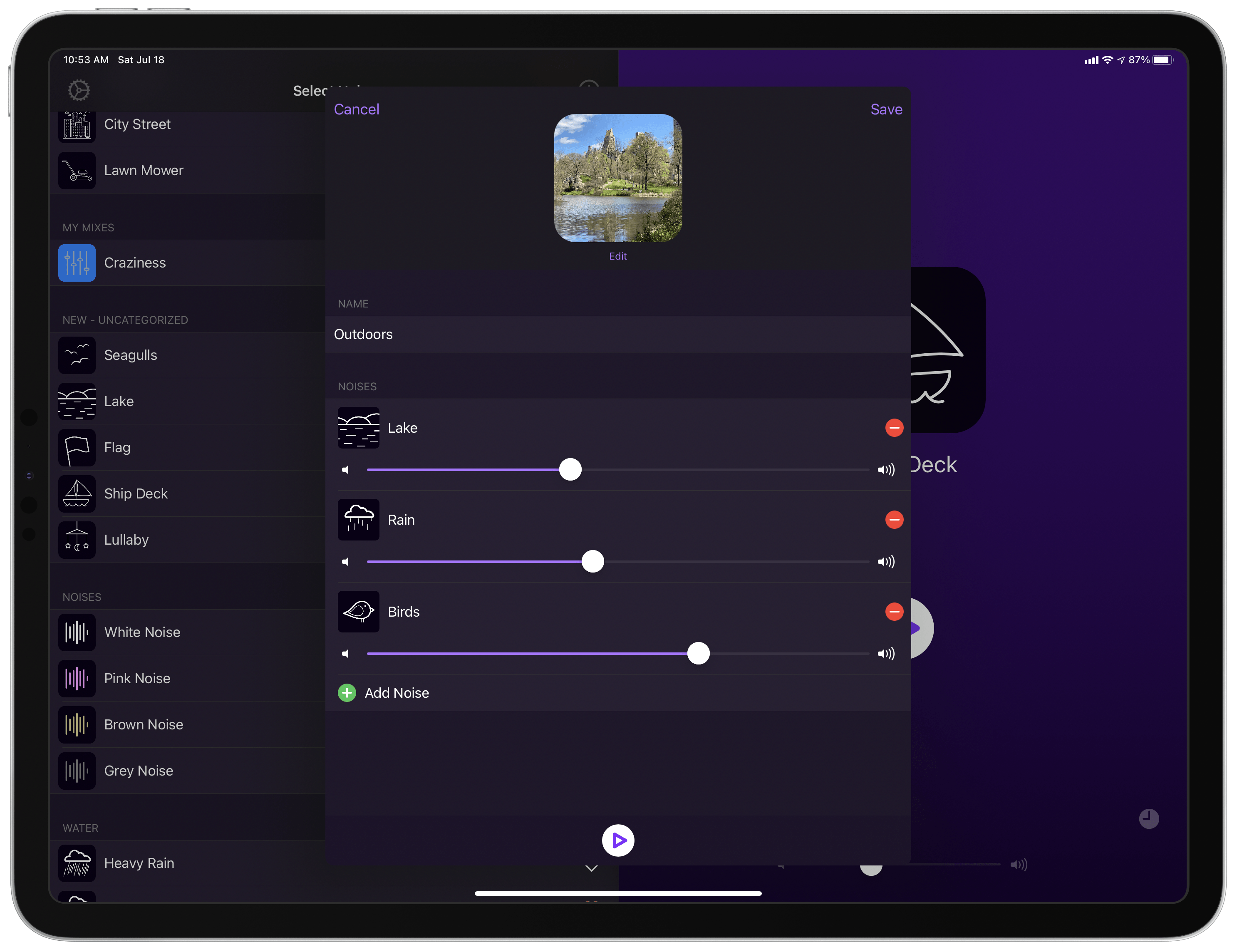 Creating a custom mix on iPad.

After each sound is added, you’ll see a volume slider accompanying it so you can tweak the levels of different noises to your liking. As you make various adjustments, there’s a play button at the bottom of the screen which enables quickly sampling the product of your work. You only need to hit play once, because after the mix kicks off you can make adjustments and have the sound update in real-time to your changes, whether you’re simply tweaking volume levels or adding or removing entire noises. The whole mix creation process is simple and intuitive.

When you’ve assembled the right collection of noises and sound levels for your mix, you can either save the mix and be done, or you can keep the creative juices flowing by customizing your mix’s icon. Every mix has a default icon auto-assigned, but if you tap the Edit button beneath that icon you can either upload a custom image or even a GIF to serve as the mix’s icon, or take one of Dark Noise’s existing icons as your foundation and tweak it with different colors to suit your preferences.

Images and GIFs are pulled directly from your Photos library, and GIFs in particular make great mix icons because they will animate when a mix is being played, just like any of the default noise icons in the app. If you want to use a built-in icon for your mix, you can choose from all the app’s options and change both the foreground and background colors to make it stand out from all other sounds in the noise list.

Saved mixes go into a new My Mixes section of the noise list, but you can also favorite them just like any other noise to send them to the top of the list. If you ever want to edit a custom mix, you can do so via the Edit button that appears when long-pressing or right-clicking the mix.

Dark Noise already had a great selection of sound options, but the new ones are nice additions:

Many of these became instant favorites upon my first use, and of course each includes a beautiful animated icon upon being played. While I never felt like Dark Noise was lacking in sound options before, I appreciate the expanded roster.

iPad cursor support. Before Dark Noise 2 you could still use a connected mouse or trackpad in the iPad version of the app, but nothing was optimized for that mode of input. Now, the cursor will snap to different interface elements like play/pause controls and buttons for AirPlay, sleep timers, and more. The heart glyph for favoriting sounds and the drag lines for rearranging favorites now subtly jump forward when you hover over them with the cursor too, which is a nice touch.

New app icons. Dark Noise already offered one of the most impressive arrays of alternate app icons, but it adds two more in this release: a skeuomorphic option inspired by macOS Big Sur’s new icon design and one that’s based on the artwork of Chapman’s own podcast, where he interviews indie developers: Launched. 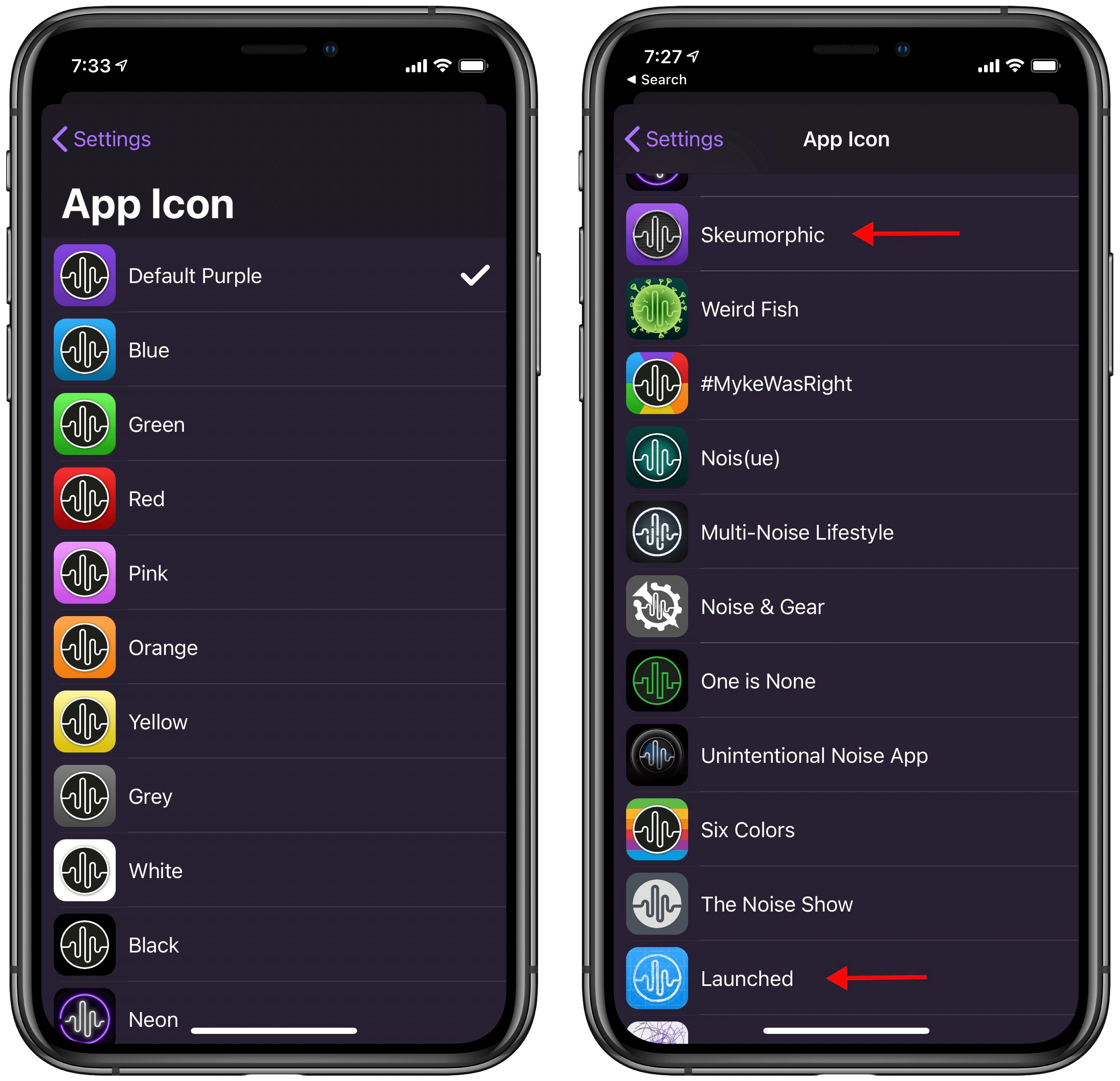 There’s an icon for everyone.

iCloud sync. Until now Dark Noise didn’t have a syncing system in place for keeping data between iPhone and iPad versions up to date. This honestly wasn’t a real problem, because the only thing sync would have been useful for was having your favorited sounds stay the same on both devices. It didn’t take much work to manually re-favorite the same sounds on each platform.

With the addition of custom sound mixes, however, it’s more important than ever to have a sync system in place, so I’m glad to see that iCloud sync is now employed both for populating your mixes across multiple platforms as well as syncing your favorites list.

Dark Noise 2 is a fantastic update that retains the app’s fundamental design strengths while adding valuable new functionality via custom mixes and great new sounds. I love that mix creation is a full-featured, intuitive experience rather than something that was quickly thrown together – it fits well with the whole app’s design ethos.

Some 2.0 releases for apps are more radical, but Dark Noise didn’t need that kind of update; rather, this latest version retains the strong foundation of the original while building upon it to offer more of what users want. If you were already a Dark Noise user, you’ll love the app even more now, and if you weren’t, there’s never been a better time to try it.

Dark Noise is available on the App Store as a one-time purchase.