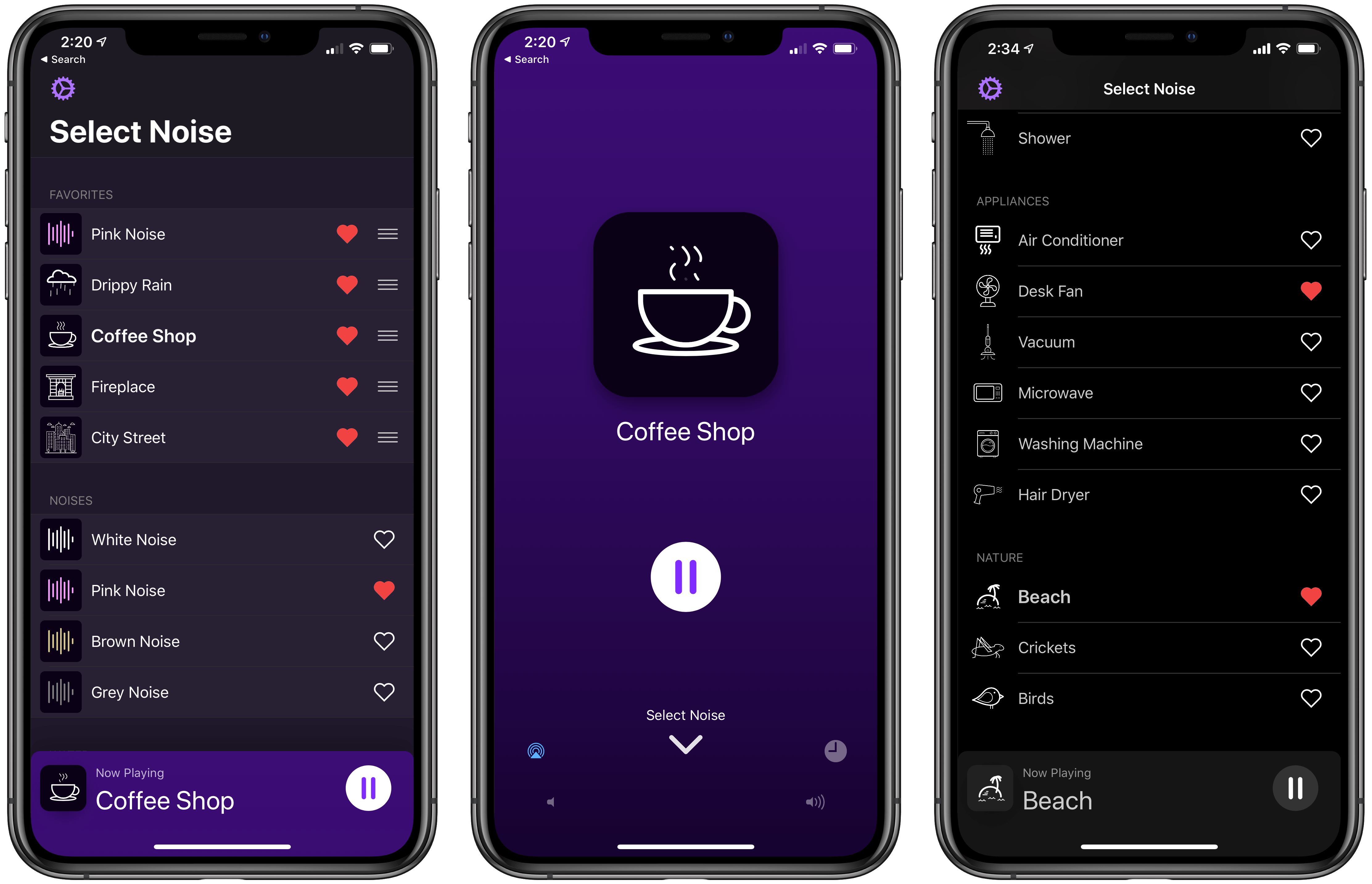 An ambient noise app’s most important job is providing a variety of sounds that can evoke a soothing sense of calm, and offer environment control. The App Store is full of apps that accomplish this purpose, and a new one’s being added to that roster today: Dark Noise, from developer and designer Charlie Chapman.

One chief advantage of Dark Noise over its competition is that out of the gate it’s the best of iOS citizens. Nearly every relevant iOS technology that Apple puts at developers’ disposal has been implemented in Dark Noise: Siri shortcuts, haptic feedback, alternate app icons, a customizable widget, an iPad version with Split View support, and more. I’ve never used an ambient noise app with such strong system integrations.

What makes Dark Noise truly special, however, is the way it’s easy not only on the ears, but the eyes too. Chapman’s pedigree as a designer and motion graphics artist shines throughout the app, creating a design experience through animations and gestures that’s truly delightful.

Dark Noise is available on both iPhone and iPad, with layouts suited well for each device. The iPhone app essentially consists of a list of ambient noises you can choose to play, and a playback screen you can pull into view from the bottom of the screen; the iPad version combines both the noise list and playback screen into a single interface, taking advantage of the device’s extra screen real estate in a way that not even Apple’s own Music and Podcasts apps do. 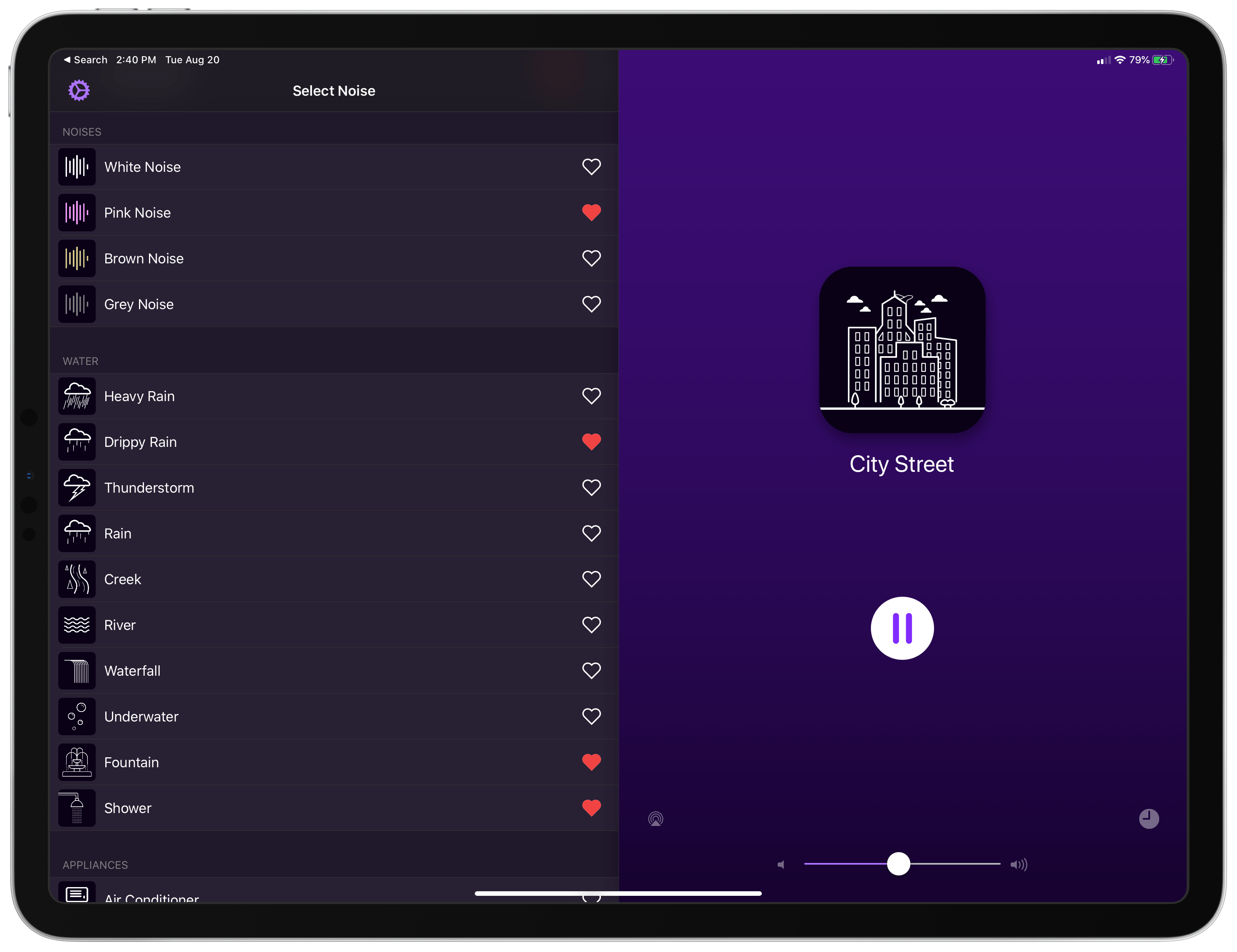 The iPad app keeps the noise list and player onscreen at once.

There are 38 different sounds to choose from in Dark Noise, spanning from the basic white/pink/brown/grey noise options to categories like Water, Appliances, Nature, Fire, Urban, and Human. I like the variety of options, and all the noises sound great – even those I expected might be grating turned out strangely soothing in a way.

Tapping a noise initiates playback, and you can hit the heart icon next to a noise to favorite it; favorites live at the top of the screen, where you can rearrange their order to your liking. From the playback screen you can configure a sleep timer for your current noise, set for a specific time of day or duration. There’s also the option to stream sound to an external device via AirPlay, though unfortunately the app isn’t AirPlay 2-ready, so you’ll have to deal with AirPlay 1’s standard delay.

At its core, that’s the basic utility offered by Dark Noise. It’s simple and no-nonsense, but it is lacking one key feature I’ve appreciated from competing apps: the ability to play multiple noises simultaneously to create a custom mix. Chapman says that feature is in his future development plan, but for now Dark Noise only supports playing one noise at a time. That one drawback aside, Dark Noise still beats out its competition in every other way I can imagine. 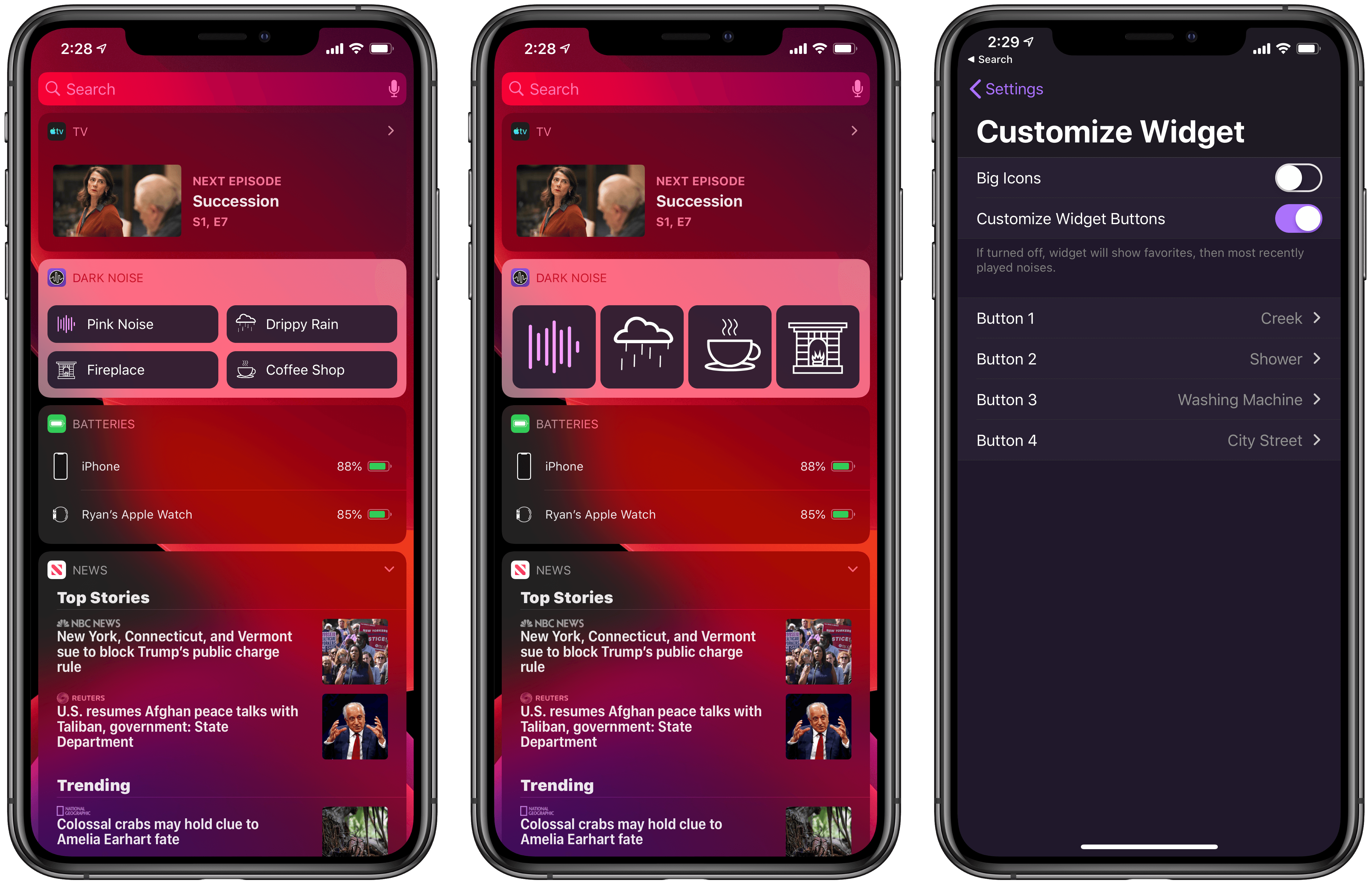 I mentioned the app’s impressive host of system features. Dark Noise’s widget provides a quick way to initiate playback of any given sound, and you can customize it to include the four noises you choose, or let it default to your favorited noises and recently played. You can set up Siri shortcuts to play different noises. The app includes over 20 alternate icons to choose from, and eight different color themes. Adoption of Handoff means you can easily transfer noise playback from one device to another. Split View and Slide Over support on iPad feels like a luxury for this category of app, but I deeply appreciate it as a heavy iPad multitasker.

One could argue that many of these features should be a given for apps launching in 2019, and as much as I might agree, that sadly isn’t the reality for most apps. But even if you do discount the advantage such features grant Dark Noise, they aren’t the only strength in its court. Dark Noise’s design is what really pushes it over the edge as the clear best ambient noise app.

Let’s start with the icon animations. Every noise in the app has its own custom icon, which is displayed in the main list view and also the playback screen. The icons look great no matter which theme of the app you use, but the best thing about them is that in the playback screen they’re animated.

Every noise has its own animated icon.Replay

This short video can’t do justice to the beauty of seeing these animations in high-resolution while your favorite ambient noise is playing, but trust me when I say it’s a lovely effect.

Speaking of lovely effects, the buttery smooth animations when raising or dismissing the playback screen are unmatched by other apps. The pleasant haptic feedback click that engages when either motion is complete is a cherry on top.

Haptic feedback is a core element of the Dark Noise UX: it’s there when you favorite a noise, when you re-order favorites, when toggling the app’s settings, hitting the play/pause button, and as part of the aforementioned playback screen transitions. I think it’s brilliantly employed, but if you’re not a fan of haptics you can reduce them in Settings.

The app has a handful of other small, but important design touches too. Like the way the downward facing arrow at the bottom of the playback screen subtly bounces up and down while adjusting translucence, or the animation when you favorite or unfavorite a noise, or the bolding of a noise’s name while it’s playing. I haven’t enjoyed fiddling with an app so much since version 2 of Castro was released.

Dark Noise is one of those apps that you have to play around with yourself for the sum of its parts to amount to something meaningful for you. Beautiful, whimsical, delight-inducing design is hard to put into words; it’s best experienced, not described.

That said, all the design achievements aside, at its core Dark Noise serves one primary purpose: playing ambient noise. It does a good job of that, with a healthy array of enjoyable sounds available. The ability to mix multiple sounds together would be great, but hopefully an update can fix that omission in the near future.

While writing this review, construction work was battering my ears from all sides: out my window I heard a jackhammer as street work was underway, and on the other side of my apartment door men were toiling away installing new floor tiling. As unpleasant as that situation was, it made a fitting environment to try out Dark Noise. Using the app’s more serene sounds, such as Drippy Rain, Beach, and Fireplace, I was able to focus my thoughts and write in peace, despite the chaos of my surroundings. And that’s what the app is all about: creating the environment your situation needs. In my case, both the sounds Dark Noise provides and the delightful design touches made for a pleasant afternoon writing despite the external racket.

Dark Noise is available on the App Store at a special launch price of $3.99.