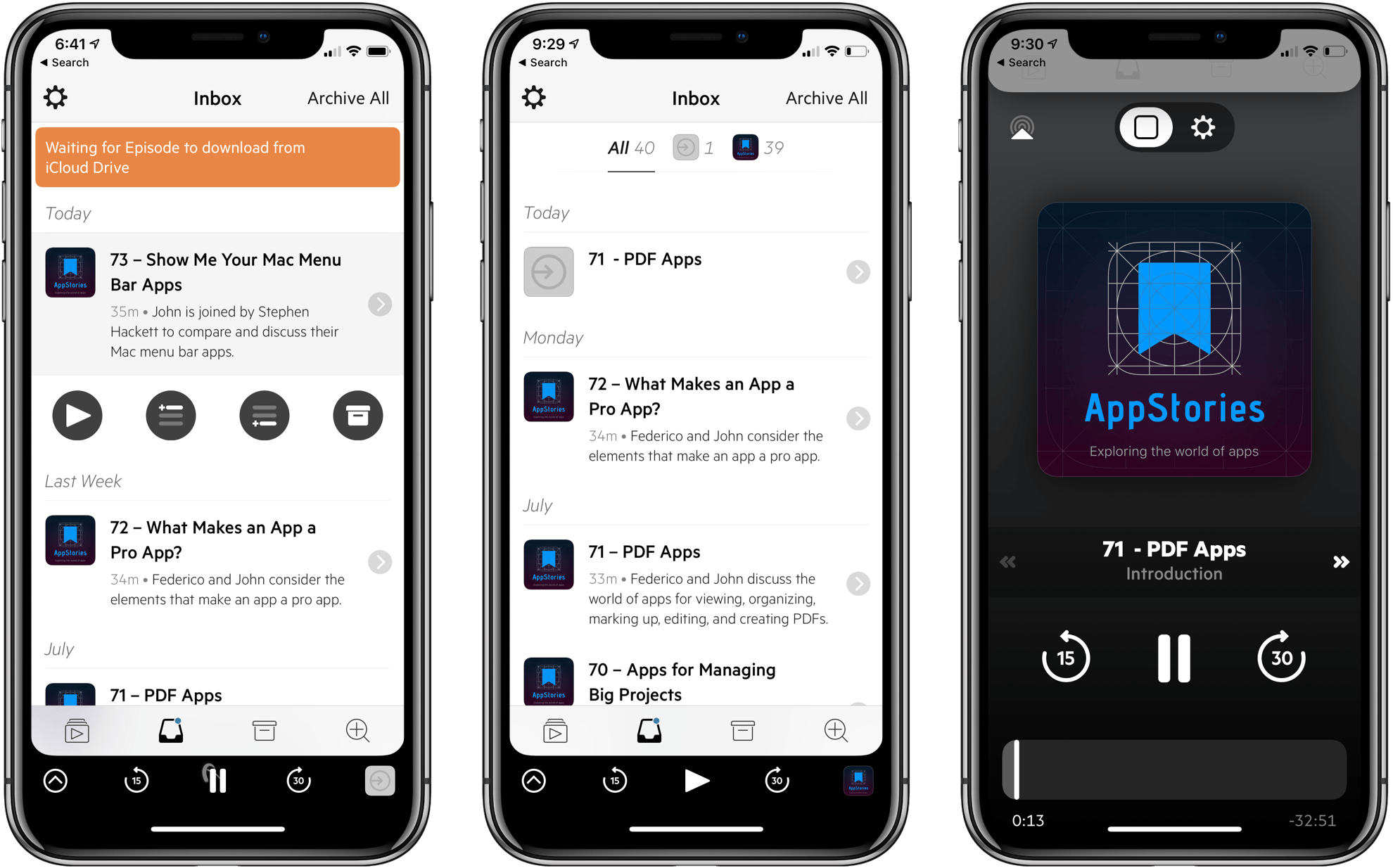 Supertop has released another solid update to its podcast player, Castro. In today’s update, Castro adds file sideloading for Plus subscribers, significantly adding to the app’s utility as general purpose audio player. Subscribers can also pre-select the chapters of a podcast they want to play too.

For plus subscribers, the update adds a ‘Castro’ folder in iCloud Drive. Add an MP3 or AAC file into the ‘Sideloads’ folder, and it shows up in your Castro inbox (or wherever else you designate in settings) ready for playback.

Adding audio to Castro is equally simple on a Mac or iOS device. On a Mac, open the Finder and drag in the audio files you want to add. On iOS, use the Files app to add files to your Sideloads folder from any file provider like Dropbox, Box, or Google Drive.

Once added, audio files show up in your Castro Inbox by default where they can be added to your listening queue like any podcast to which you subscribe. Instead of your Inbox, you can also add sideloaded audio to the front or back of your Queue or Castro’s Archive from the app’s settings.

Sideloading opens up exciting possibilities, especially when combined with other apps. For example, you can add DRM-free audiobooks, audio from lectures or conferences recorded from YouTube or other sources using an app like Audio Hijack, or add downloaded bonus podcast episodes like the AppStories Unplugged episodes that we’ve created for Club MacStories members. Podcasters can also use sideloading as a way to listen to draft episodes before publishing them. With one straightforward feature, Castro has become a far more flexible, general-purpose audio player.

Overcast has a similar feature for subscribers, but it’s web-based and limited to 2 GB of storage. Overall, I prefer Castro’s implementation, which doesn’t require navigating to a website. Though Overcast’s 2 GB limit hasn’t been an issue for me, the lack of a cap in Castro is a definite advantage for anyone who wants access to lots of sideloaded audio. 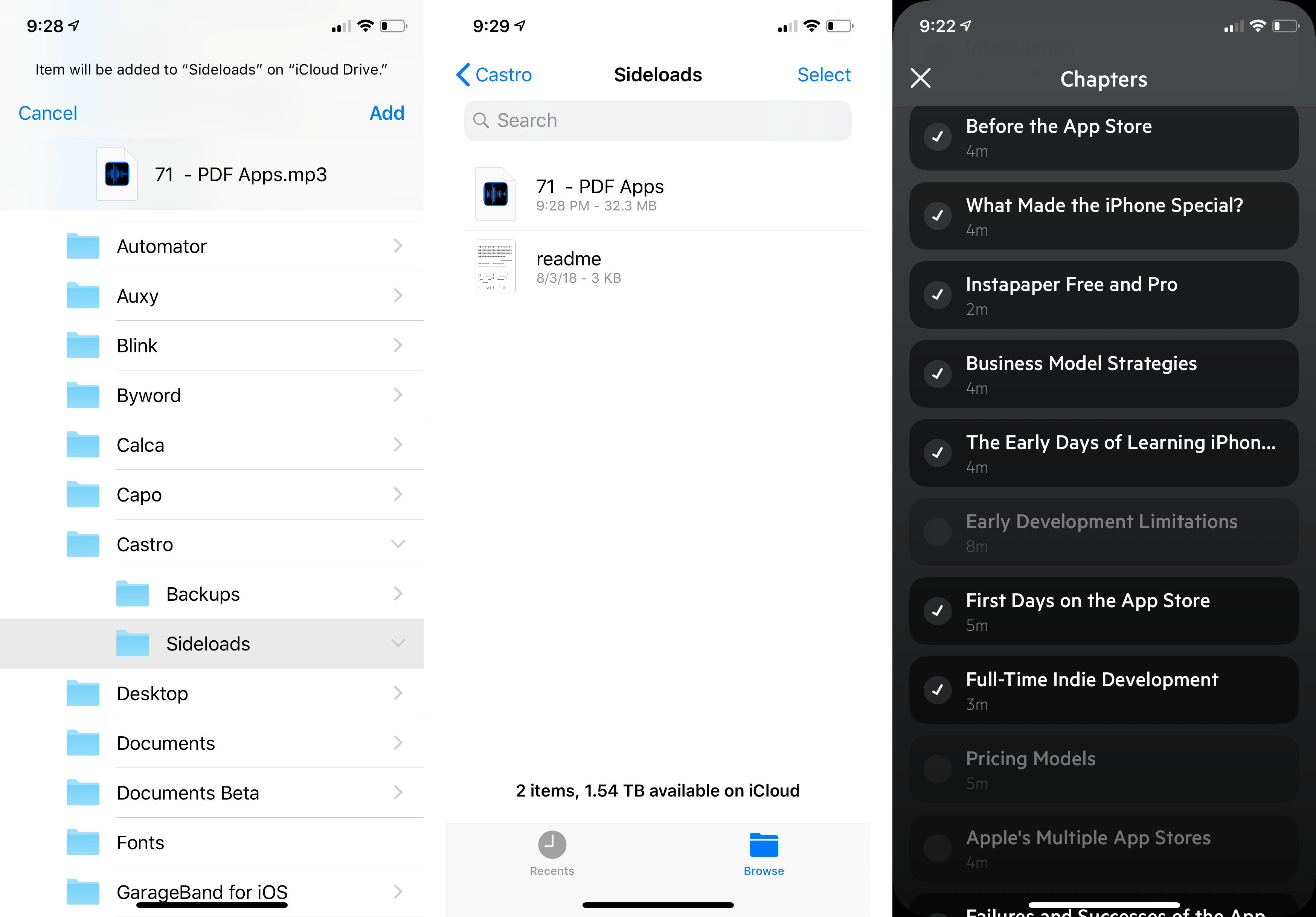 Sideloading a draft episode of AppStories and deselecting chapters for playback.

The second feature added to Castro is what Supertop calls Chapter Pre-Selection. In Castro, if you tap on the current chapter in a podcast episode, it displays a list of all the chapters so you can skip around inside the episode. With today’s update, Castro adds checkboxes to each chapter. By default, all of the chapters are selected. If there are chapters in the list to which you don’t want to listen, tap the checkmark icon to deselect the chapter, and only the selected chapters will play.

The convenience of selecting chapters in advance is greater than I had imagined. By pre-selecting chapters, I can, for example, head out for a run or walk without having to fiddle with skipping chapters on the go, which means fewer distractions and opportunities to drop my iPhone.

Supertop continues to regularly update Castro with interesting features. If you haven’t tried Castro in a while, it’s worth another look. The app is free to download on the App Store and you can try the Plus features, including sideloading, free for one week, after which they are $2.99 every three months or $8.99 per year.