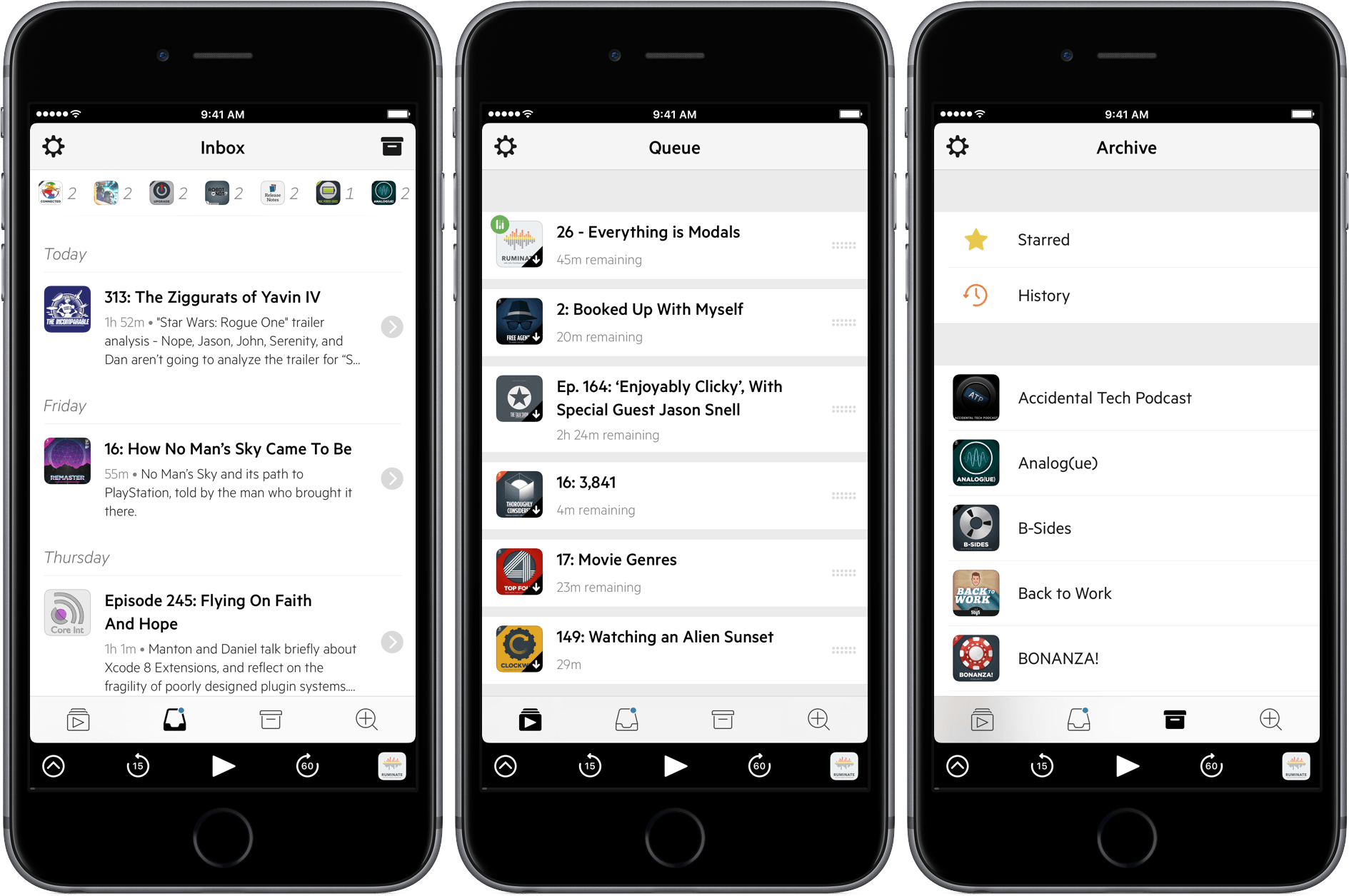 Castro 2 from Supertop demonstrates that there is still plenty of room for innovation in podcast apps. Although every podcast app starts with the goal of helping listeners find and play podcasts, the path each app takes varies as widely as the listening habits of users.

Castro 2 eliminates much of the complexity of other podcast apps by focusing on a single podcast queue. The result is a focused listening experience that emphasizes episodes over shows, playlists, or feeds. It’s not an approach that will appeal to everyone, but if you find yourself looking for a simpler way to manage podcasts, or listening to some, but not all, episodes of shows, Castro is worth considering.

At the heart of Castro is its queue, an easily managed list of just the shows you want to listen to, in whatever order you choose. To understand how the queue works, first you need some podcasts. 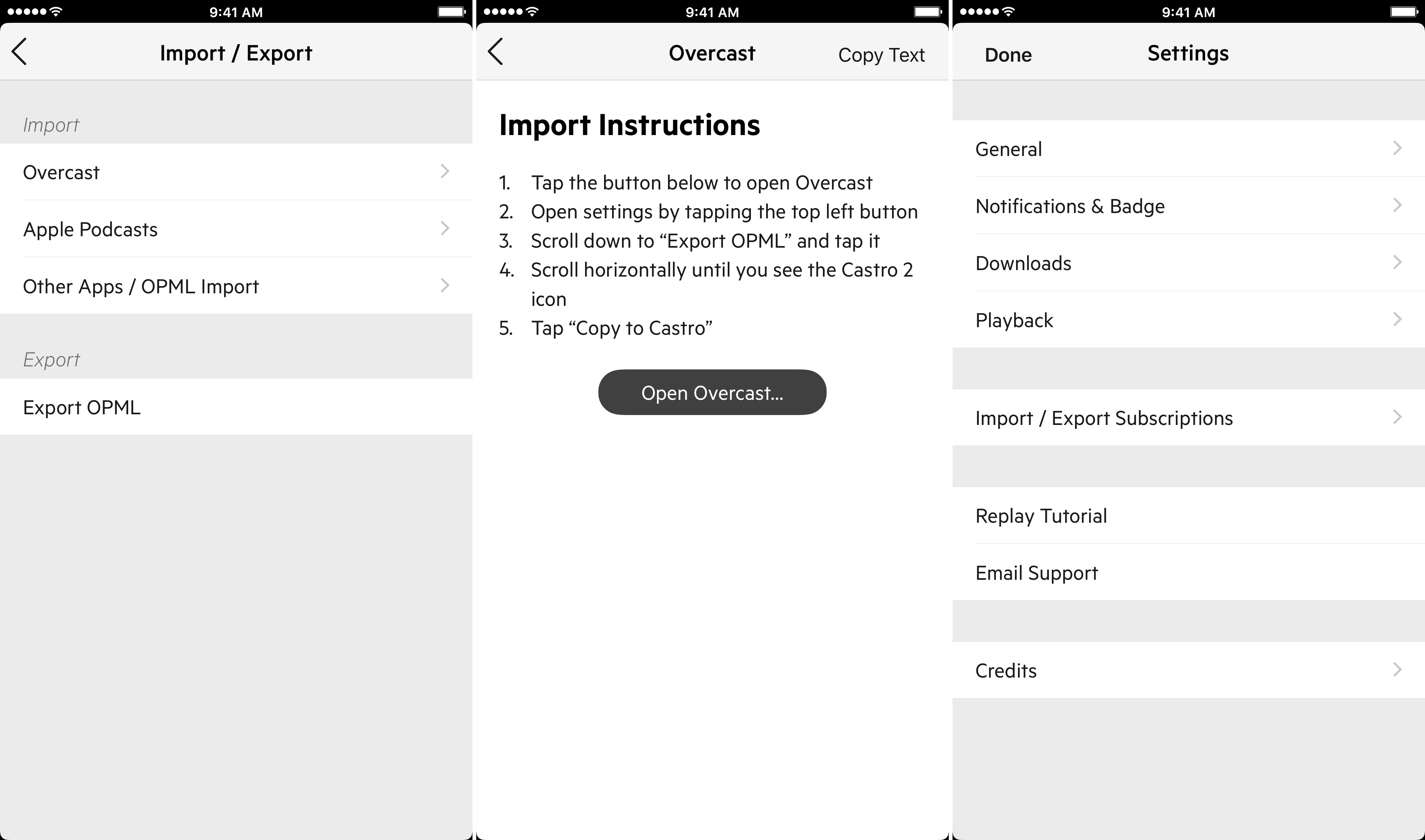 Castro makes the process of importing shows you subscribe to easy with clear instructions for exporting podcast subscriptions from Overcast, Apple Podcasts, and other apps using a share extension that copies your podcast feeds into Castro. The other way to add podcasts to Castro is from its Discover tab. From the search field, you can search for the name or creator of any podcast. Castro also includes the top charts for each podcast category in the Apple Podcasts app. These categories are a nice addition for people who are new to podcasts, but I suspect that the majority of users who are willing to pay for a third-party app like Castro are probably already podcast listeners and may not find these lists useful. 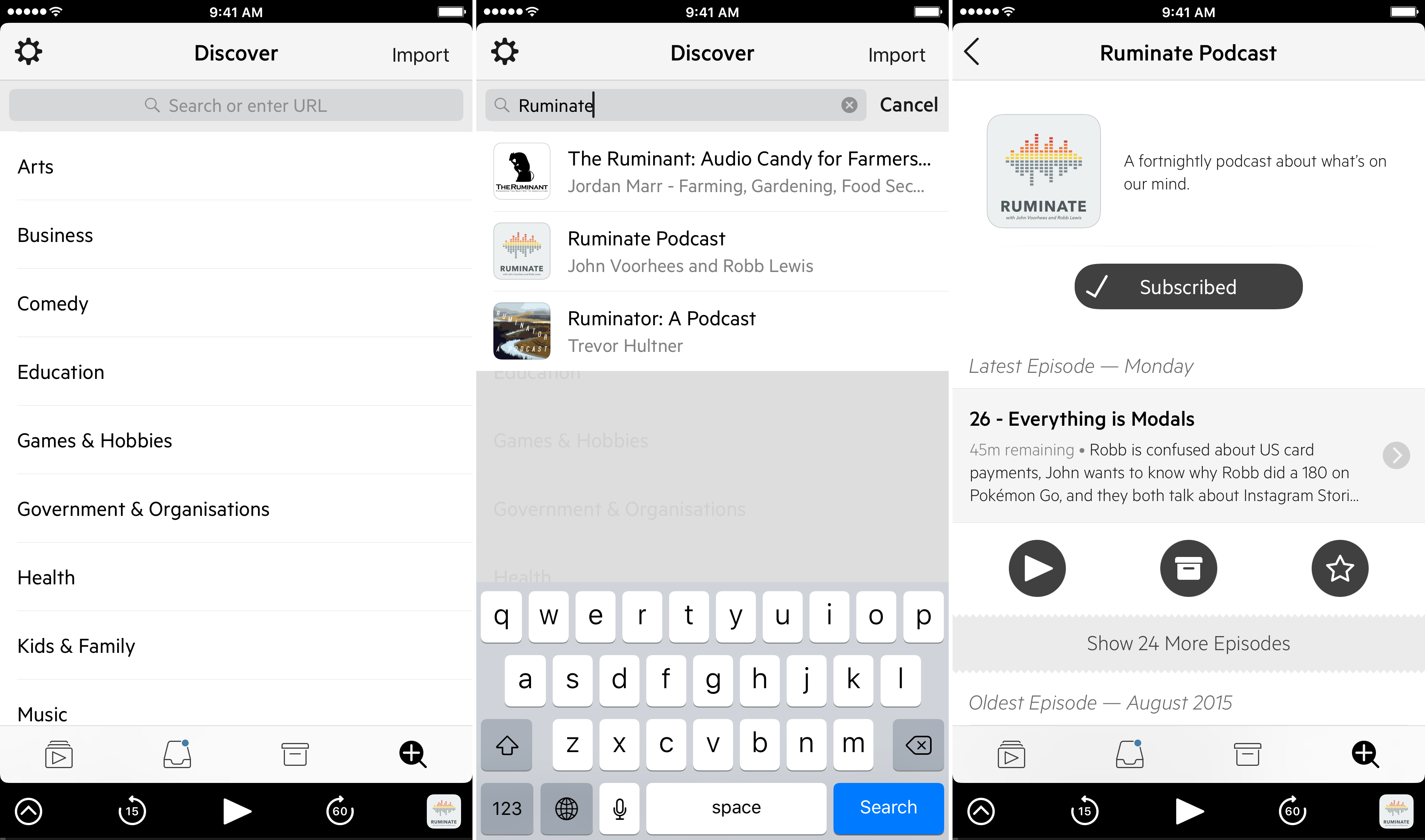 After adding your podcast subscriptions to Castro, it’s time to start queueing them up. A good place to start is the Inbox tab. Along the top is a series of show art icons that display the number of new episodes in your inbox and can be used to filter episodes by show. Below that is a chronological list of episodes with a summary of each. If the summary isn’t enough to help you decide if you want to add an episode to your queue, tapping the disclosure indicator on the right side of the cell displays the full description and show notes. 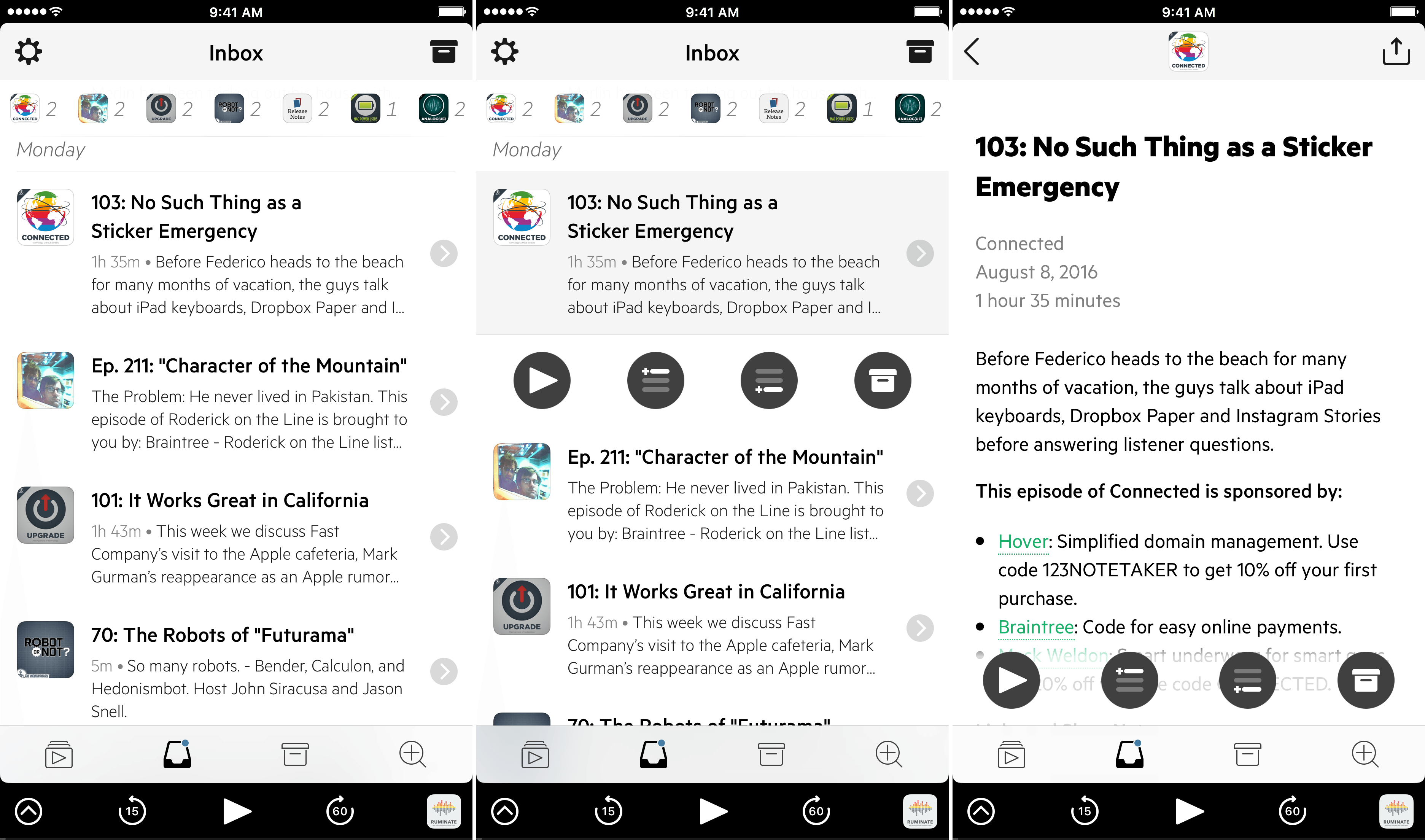 Castro’s inbox collects every new episode of your podcasts.

Tapping on any episode in the Inbox reveals four icons. The first is a play icon that immediately adds the episode to the top of your queue and starts streaming it while it downloads. The next two icons add episodes to the top or bottom of your queue with a delightful animation that makes it clear where you sent the episode. After an episode is in your queue, it begins to download immediately. The final button moves the episode to the Archive, which I discuss below.

Castro’s animations are practical and fun. (Thanks for the GIF Graham!)

The Inbox is not, however, the only way to move episodes to your queue. You can do so from any list of episodes in Castro or by tapping on show art, which opens a detail view for a particular show. Each show’s detail view has its own settings, from which you can choose to automatically send new episodes to the Inbox (the default), to the top or bottom of your queue, or to the Archive.

All of the episodes you have queued appear under the Queue tab where you can refine the playback order by using the drag handles next to each episode. If you press the play icon at the bottom of the screen, the first episode in your queue will play. Tapping on an episode reveals three icons, a play button, an archive button, and a star button. If you tap play for an episode that is not at the top of your queue, it immediately jumps to the top and begins playing. Tapping the archive button removes the episode from your queue and sends it to your archive. The star button marks an episode as a favorite, which makes it easier to find for re-listening or sharing later. 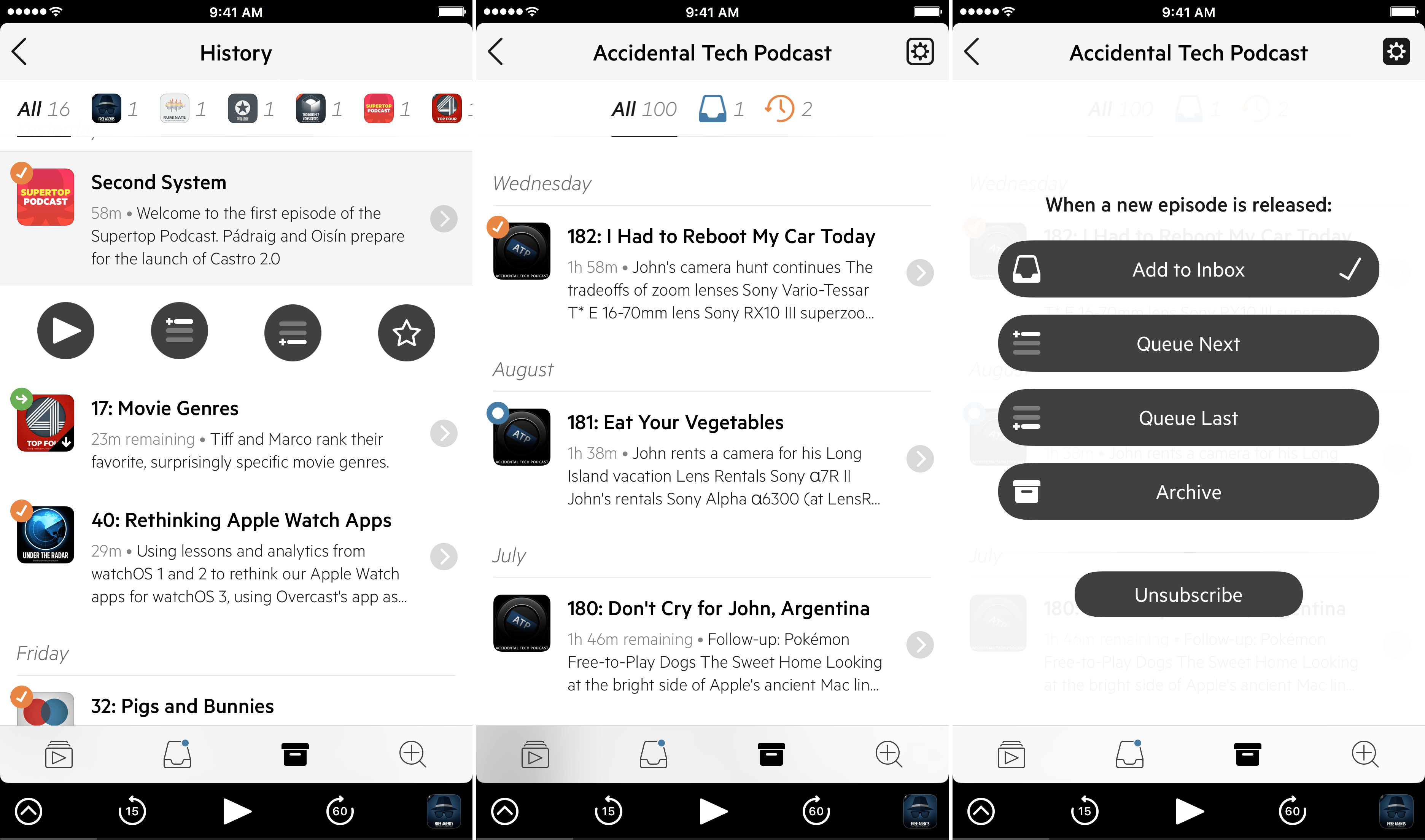 You can add episodes from any list and even automate the process.

The playback controls at the bottom of the screen can be expanded by tapping the disclosure indicator, which gives you access to a sleep timer with multiple time increments, a playback speed control with several settings, episode and title information, and a scrubber for moving through an episode. There is also a share button for sharing the episode with a special castro.fm URL that opens an episode in Castro if the app installed on the recipient’s iPhone or on a webpage with playback controls if Castro isn’t installed.

The final main tab of Castro is the Archive tab, which seems like a bit of a misnomer. It is an archive of past shows you’ve listened to, but it also includes shows you’ve marked with a star, all the shows in your Inbox, ones you are currently listening to in your queue, and past episodes of the show. I found this a little confusing at first because I was expecting a list comprised of just the shows I had listened to or moved to the archive, but if you think of the Archive as something more akin to the ‘All Mail’ view in an app like Apple Mail, it makes more sense. 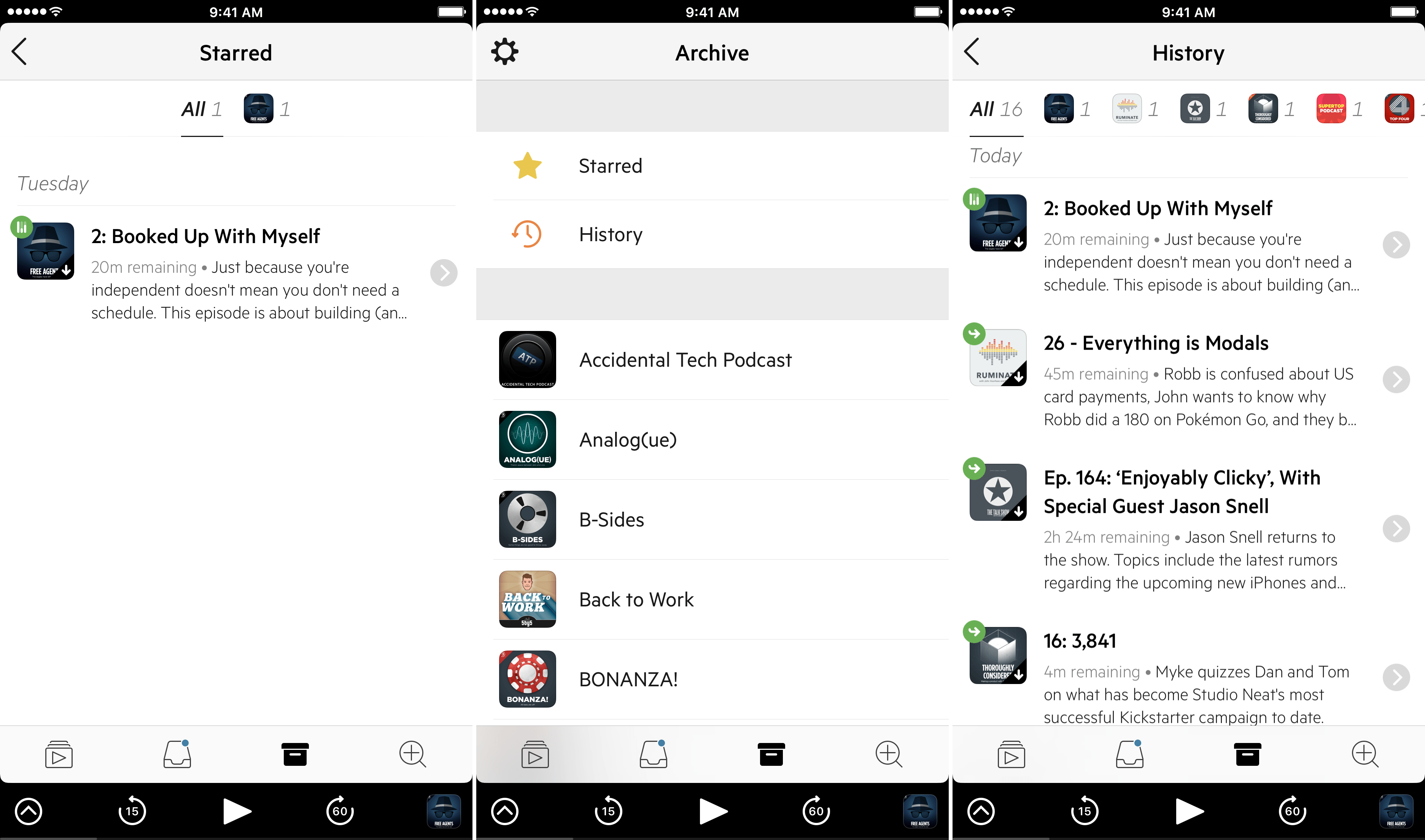 The Archive tab includes starred episodes and your listening history.

Castro also has an excellent Night Mode that is reminiscent of the dark themes in Supertop’s RSS reader, Unread. Night Mode can be turned on in Castro’s setting or anywhere in the app by swiping down with two fingers, just like Tweetbot. When you turn on Night Mode, there is a fun animation that makes it look like a window shade is being pulled down. 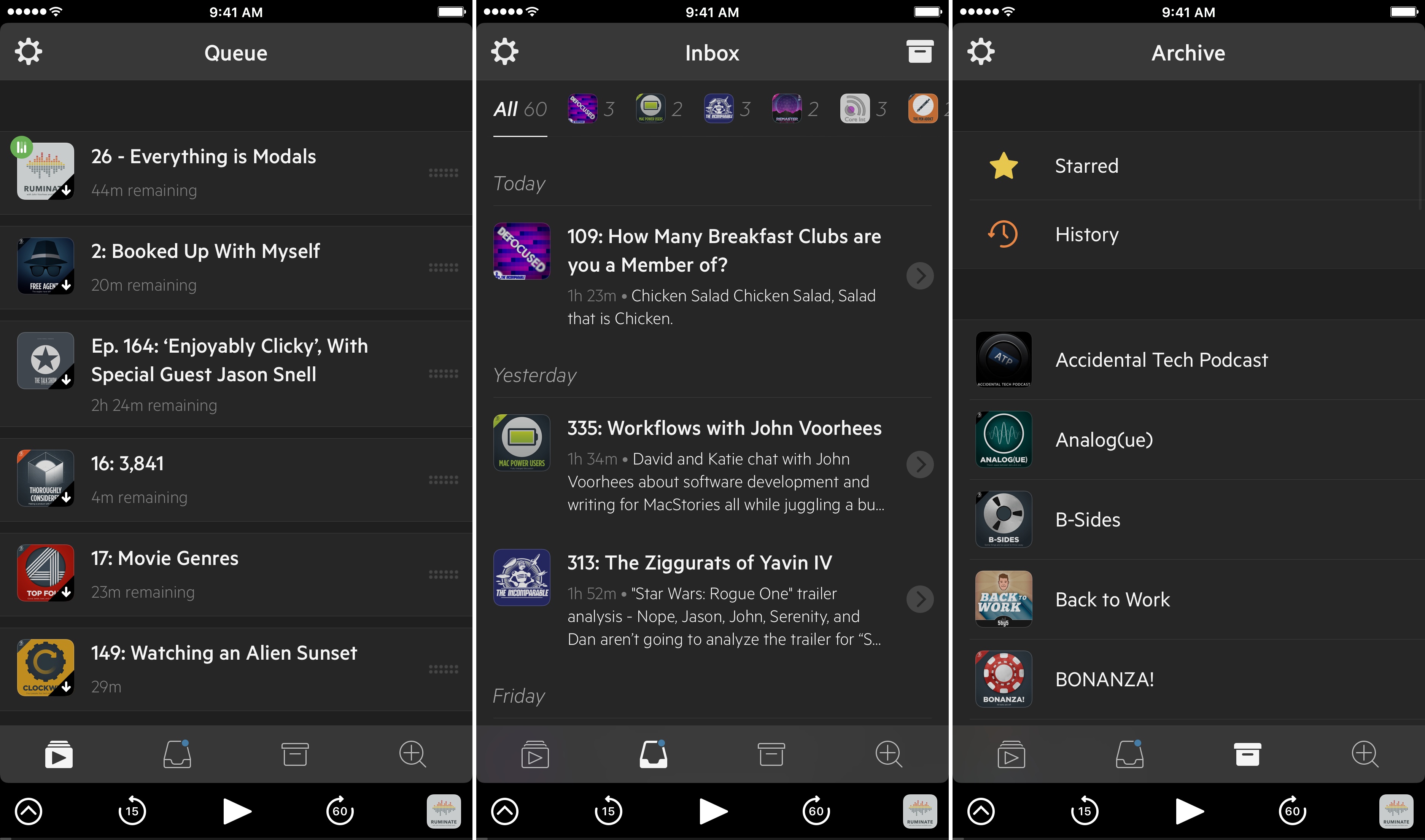 Castro is well-executed, but there are few things that I hope are addressed in future versions. The first is that I would like an iPad version. I don’t listen to podcasts on my iPad often, but I know people who do, especially on the iPad Pro, which has fantastic speakers that make it a great option if you listen to shows with someone else.

There is scrolling text with the episode name and show information on the play screen, but no show art, which make it hard to quickly identify what you are listening to. Elsewhere in Castro, show art is limited to small images that can make it hard to distinguish shows from each other. The play screen seems like a natural place to add large show art. 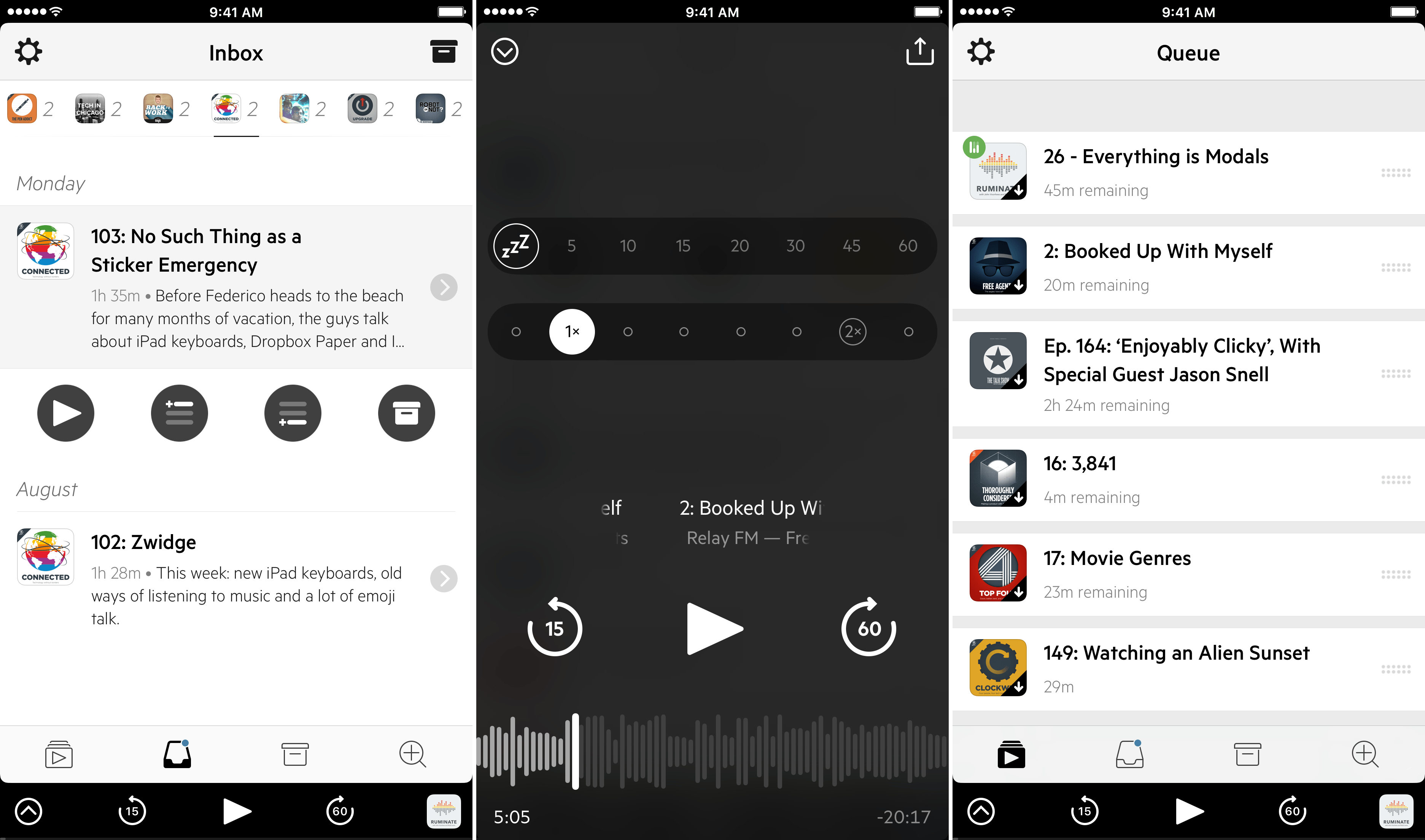 More room should also be allotted to episode and show names in the playback view. The horizontal space for both is about half the width of my 6s Plus in portrait and only about a third of the space in landscape, which means most episode titles and show names scroll horizontally, which wouldn’t be necessary as often if they were given more room.

Pocket Casts’ recent update added trim silence and volume boosting features similar to Overcast’s Smart Speed and Voice Boost. It’s worth noting that Castro does not include equivalent features. Speeding up and slowing down playback worked well in my tests of Castro, but it does so at a constant rate, whereas Overcast and Pocket Casts reduce silences proportionately, which sounds more natural. Castro does not support chapters either.

Podcast management is hard if you listen to a lot of shows. Castro’s episode-focused approach works especially well if you find yourself not wanting to, or without the time to, listen to every episode of each show. By adding some shows to the top or bottom of your queue automatically and moving others there manually, it is possible to strike a nice balance between automation and curation that fits most listening styles without maintaining multiple playlists based on complex rules.

Whether Castro is the right podcast player for you depends on your own listening habits and ‘must-have’ features. What Castro lacks in features in comparison to Overcast and Pocket Casts, it makes up for in ease of use and an elegant design. I won’t be switching from Overcast personally, primarily because of Smart Speed, but I have enjoyed using Castro over the past ten days and am considering using it in tandem with Overcast for secondary and one-off podcast episodes because it is so easy to comb through episodes quickly and create an on-the-fly queue.