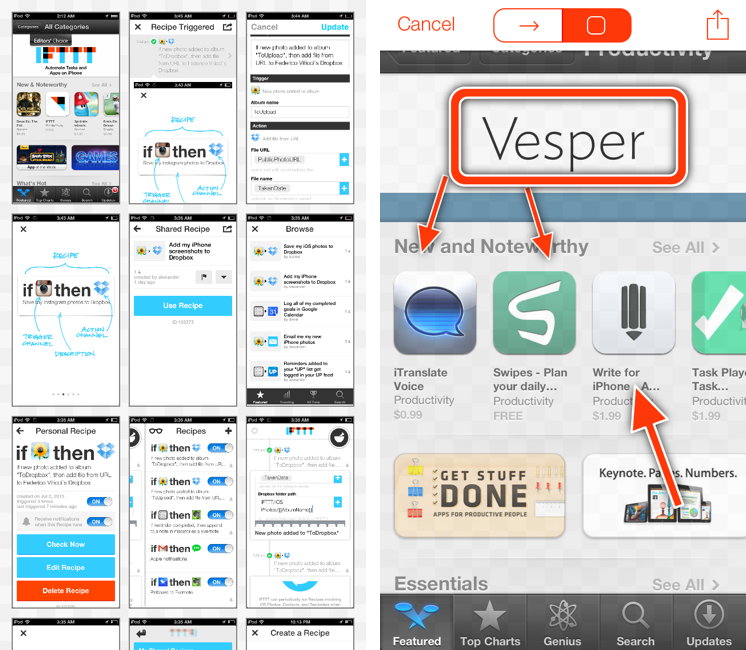 Back in November 2012, I shared my frustration with the sharing mechanism of Skitch for iOS, concluding that:

So now I’m looking for simple image annotations on iOS. Or an update to Skitch.

I like Skitch for iOS and I like it even more on the Mac, where it’s got support for keyboard shortcuts and FTP uploads. I use Evernote on a daily basis, and, in spite of an initial public outrage, I have always been excited by the possibility of having my Skitch annotations synced through Evernote and available on every platform. With the latest updates, Evernote brought more annotation tools and inter-app communication features to Skitch, making it an even more powerful solution to annotate documents and store them in Evernote.

However, as I wrote back in November, I also like being able to quickly annotate an image and share it at full-resolution with my readers and followers. I often take screenshots of websites, Apple’s App Store, or apps that I’m testing, and I want to add arrows, selections, and text to mark up those images and share them. Skitch is a great tool, but it takes several taps and (sometimes slow) loading times to import images and sync them with Evernote; what’s worse is that Skitch tends to share compressed, low-res versions of its annotated images on Twitter, meaning that, if I want to use Skitch to publish an annotated image at full-res, I have to go through a convoluted process of uploading to Evernote’s servers and re-saving an image using Safari. I don’t want my followers to see blurry screenshots, and I need to be able to annotate and share images as quickly as possible.

Bugshot, a new app by Marco Arment, is a super-simple image annotation tool available at $0.99 for the iPhone and iPad. Bugshot doesn’t sync, it only comes with two annotation shapes (orange arrows and boxes), it doesn’t have any settings or options to configure, and, for the most part, it’s exactly what I was looking for months ago: an app that can import a screenshot, allow me to add an arrow or selection, and that has a built-in sharing menu for email and Twitter.

Bugshot eschews the idea of “library” to present a list of screenshots fetched directly from the Camera Roll. There’s no distinction between iOS’ photos and files stored in Bugshot because, effectively, Bugshot doesn’t store annotated images in a database separate from the system’s one. Bugshot launches with a list of screenshots in reverse chronological order, and it can share or save annotated screenshots back to the Camera Roll. Bugshot’s focus is on annotating and sharing with minimal friction.

Bugshot looks like an iOS 7 app even if iOS 7 isn’t out yet. The interface consists of a checkerboard background for the initial screen, a toolbar with Cancel/Share buttons and a shape selector, and another checkerboard that dims the screenshot in the editing view to better indicate that you’re annotating a full-size screenshot. The absence of a heavy custom interface enables Bugshot to put content front and center – what ultimately matters when you want to make it fast and easy to annotate images – and it’s a good exercise to get ready to the kind of interface decisions that we’ll likely see from iOS developers later this year.

Adding shapes in Bugshot is equally simple and intuitive: you can select the box or arrow tool at the top, and slide your finger on screen to draw shapes. The longer you draw, the bigger and thicker shapes grow. You can tap & hold arrows and boxes to rearrange their placement, or you can tap the screen to dismiss the toolbar and checkerboard and see what the final result will look like. Once a shape has been placed on screen, you can’t, unlike Skitch, re-select it to tweak its size: tapping it will only let you drag it around.

There’s no Undo function, but you can double-tap any shape to remove it. I don’t know how Arment could have built a different remove feature without adding the complexity of shape selection status, but I believe that the current remove gesture is too hidden (I wouldn’t have discovered it myself if it wasn’t for a tweet by Arment about it). 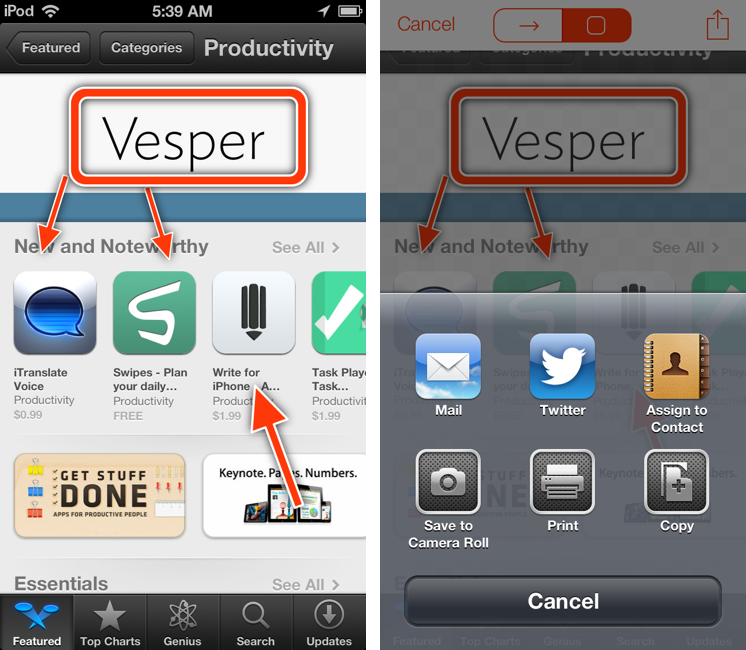 Because Bugshot is meant as a tool to take Camera Roll screenshots and share them, the concept of “saving” changes is tied to the act of sharing them. To clear an item from all “unshared” annotations, you just have to hit the Cancel button and go back to the pristine list of screenshots from your Camera Roll; once again, the lack of any sort of file management takes the pressure off having to remember the “status” of your annotations. In this regard, I don’t think it’s too absurd to liken Bugshot’s low friction to Vesper’s immediacy and lightness.

I wasn’t expecting the same degree of complexity found in Skitch from Bugshot, and while the app’s simplicity is refreshing, there are some features I depend on that will force me to keep Skitch on my devices for the time being. Aside from the aforementioned lack of Undo/Redo (something that I can mitigate by hitting Cancel and re-opening an image), I miss the ability to add text annotations and selecting different colors. The current selection tool gets the job done, but I would like to see Skitch-like (and Preview-like) oval and line selections. The built-in sharing options are “good enough” for my workflow, but I’d prefer to be able to send images directly to other apps (like Droplr or Evernote) using an “Open In” menu rather than having to save back to the Camera Roll first. Hiding the iOS status bar from the app had the effect of making the UI feel very spacious and “out of the way”, but the downside is that there’s no easy way to quickly scroll back to the top of the list; I would like to see the status bar make a comeback, at least if only in the grid view.

Last, as also noted by Arment, this first version of Bugshot comes, ironically, with a series of bugs that include a grid not properly resizing in landscape mode and slow scrolling on iOS 6 devices. In testing the app on my iPhone 5 with iOS 7, iPod touch 5th gen and iPad mini running iOS 6.1, I noticed that the iPod touch struggled to keep up with scrolling in the main screenshot list.

If you’re looking for more advanced features and integrations (such as browser and maps), Bugshot is no Skitch replacement. However, thanks to its speed and management-free approach to annotating screenshots, Bugshot is the app that I’ll launch when I’ll need to mark up an image with arrows or selections. I’m looking forward to future improvements, but I think that Bugshot 1.0 is a solid start.

Bugshot is available on the App Store at $0.99.