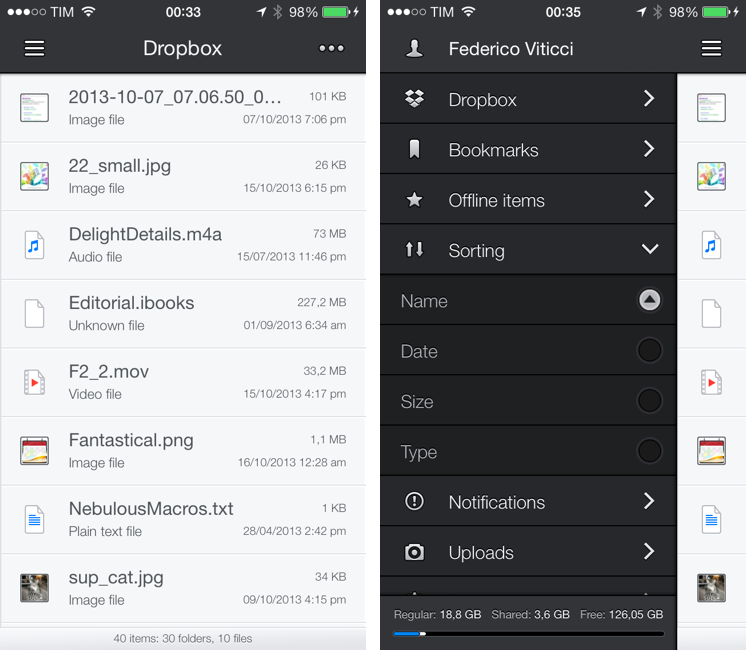 Dropbox is my filesystem. Every file that I need to have available across devices and that doesn’t require the rich text and search capabilities of Evernote goes into my Dropbox account: screenshots that I share with coworkers; PDF copies of my receipts and invoices; articles written in Editorial are stored in Dropbox. Even my photo backup workflow relies on Dropbox as an archival system that’s always in the cloud, readily available and easily shareable. With the Packrat feature, a $39 yearly add-on, I get access to the full history of my deleted files and file revisions, which have saved me on several occasions in the past.

The official Dropbox app for iOS is good, but it’s not great for power users and it hasn’t been substantially enhanced for iOS 7 yet. That’s what Italian developers Matteo Lallone and Gianluca Divisi (together, Tapwings) want to fix with Boxie, a $1.99 third-party Dropbox client for iPhone packed with advanced features and navigation options. I’ve been testing Boxie for the past month, and I think that it’s off to a solid start.

Built for iOS 7, Boxie sports dark UI elements for the top navigation and the sidebar, where you’ll be able to access all of the app’s features and custom views. The title bar blends with the iOS status bar, whereas files and folders are presented against a light background with icons for folders and different file types. Boxie’s UI is neutral and sober, with iconography that isn’t as thin as other iOS 7 icons, but that doesn’t bother me. Something that I don’t like, and that I wish Tapwings will improve soon, is the sound effect that accompanies navigation (or opening the sidebar) that is too heavily inspired by the same sound effect in Tweetbot 2. Othwerwise, Boxie comes with some nice sound effects for notifications and other messages, but that one stood out to me. 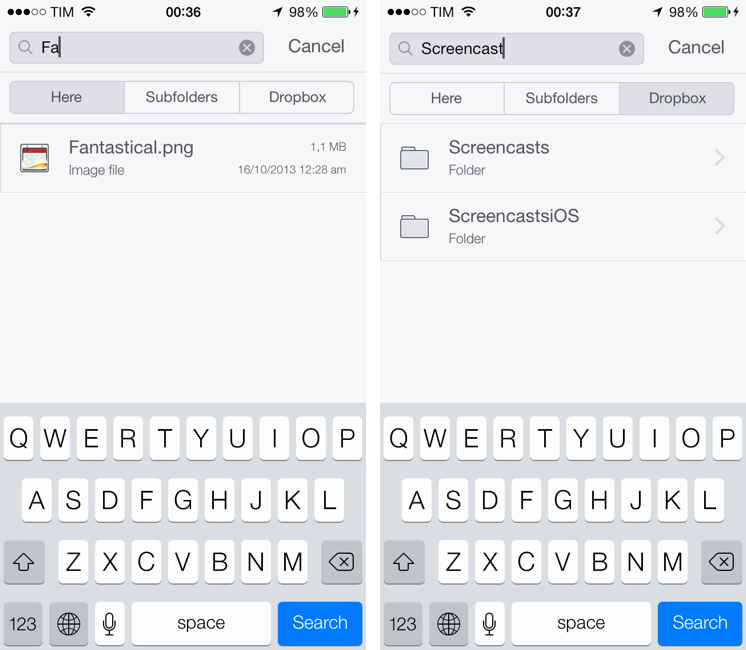 Once you’ve found a file you’re looking for, Boxie comes with a variety of features to open it, preview it, or share it: you can swipe horizontally on a file to bring up an action bar (reminiscent of the old Tweetie for iPhone) to bookmark a file, star it, share it, rename it, or show previous versions of it. There are several things that Boxie is doing differently from the official Dropbox client, and they’re all worth a look.

Boxie differentiates between bookmarked and starred files: unlike the Dropbox app, which treats bookmarks as items you want to make available offline, Boxie lets you create shortcuts to files or folders (bookmarks) as well as explicitly tell the app to make a file available offline. Perhaps you want to have easy access to a file or folder buried deep down in your account, but you don’t want to make it available for offline usage – in that case, Boxie can create a bookmark to it, which will require an Internet connection to view the file. If, however, you do want to save an offline copy of the file, the star button behaves like the official Dropbox counterpart, letting you store files offline.

Both Bookmarks and Offline items are available as sections in the sidebar, and I believe that Tapwings’ implementation of this idea is far superior to how the Dropbox app works: I always have an Internet connection and I don’t care about offline availability of my items, but I like having shortcuts to them. Alas, due to a limitation of the Dropbox API, Boxie can’t make a whole folder available offline, but Lallone and Divisi have overcome this through a handy “make files available offline” button that you can access by tapping the “More” button in the top right corner of a folder. Still, I would like to see offline items being grouped by folder in the Offline view, and I’d also suggest implementing a button to quickly remove all cached files from the app; right now, you have to swipe over an item to remove it.[1] 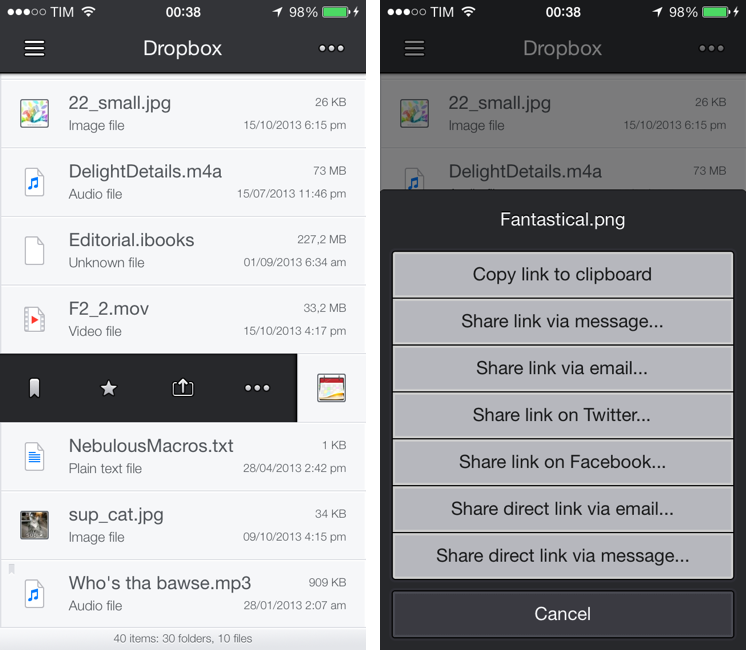 Sharing in Boxie happens in two ways: the easy one is that you can generate a shareable Dropbox link and copy it to the clipboard or send it to the usual set of system services like Twitter and Facebook. With the second, more interesting one, Boxie lets you generate direct links to a file that use the Boxie URL scheme and a little known Dropbox feature called copy ref to let other Boxie users tap on a link and add a file directly to the app without opening the Dropbox website. In my tests, this worked admirably well: I was able to create “direct links” and share them via iMessage and Mail; on the other end, my friend Stephen tapped my link, which opened his Boxie app, and which let him add the file to his Dropbox without having to view a webpage first. 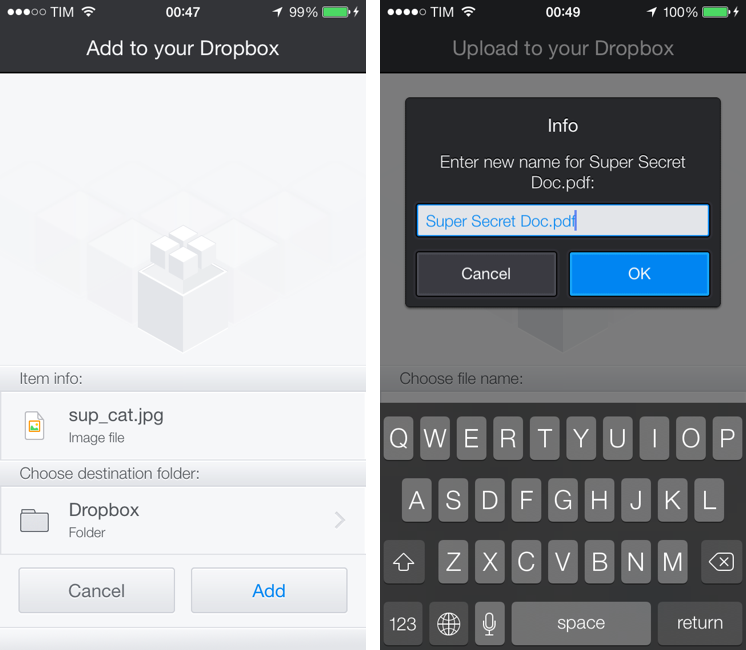 When you’re sending a file to Boxie, the app will show you an Upload screen that has a preview of the file you’re about to upload to Dropbox and a destination folder; you can tap the folder to change it, and if you don’t like your existing destination folders you can tap the “+” button to create a new one before uploading. When receving files via “Open In” from other iOS apps, Boxie can also allow you to rename a file by tapping on it, a feature that is absent when uploading files shared via direct link; a minor detail that I’d like to see in a future version of the app would be automatic selection of the file name when renaming (excluding the extension). Similarly, I’d also like to have “recent folders” in the Upload screen, showing destination folders where you’ve recently uploaded files to.

Speaking of uploads, Boxie can look inside compressed .zip archives (like the iOS 7 Mail app) and show you files contained inside them; tap one, and you’ll get the Upload screen to upload a single file somewhere else in your Dropbox. 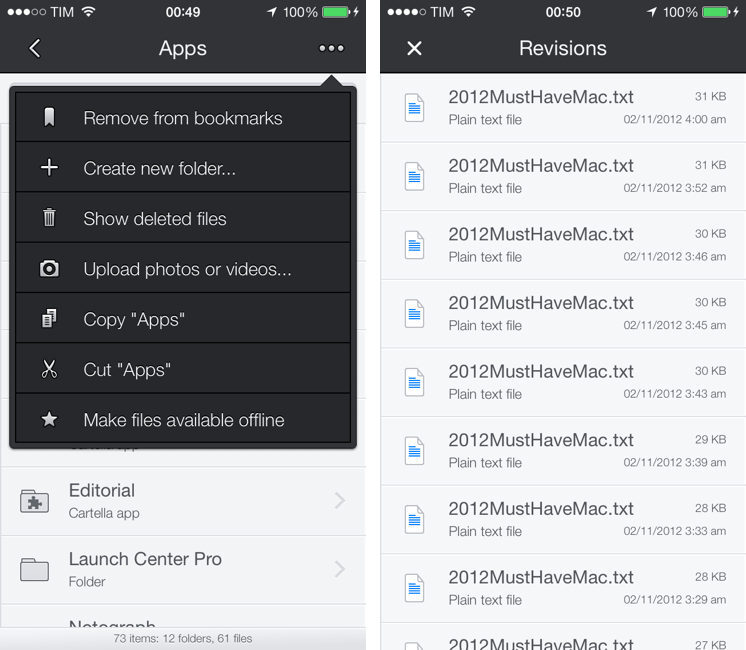 Boxie’s big feature is support for restoration of deleted files and Dropbox versions. In any folder, you can show deleted files that will appear as dimmed in the app; a deleted file can be restored directly from Boxie without switching to the Dropbox website. For existing files, Boxie can – like Editorial – show previous versions that are stored on the Dropbox servers and restore any version in your account. Again, this is a feature that used to be exclusive to some specific iOS apps (like text editors) and dropbox.com, and Boxie makes it available right on your iPhone. Boxie doesn’t have the advanced features of Editorial such as a version comparison tool for text, but the fact that you can access versions is a great addition when compared to the official Dropbox client.

Boxie’s sorting options are flexible and well done. From the sidebar (which, by the way, is always accessible by swiping over the title bar) you can sort files and folders by name, date, size, and type in both ascending and descending order; sort settings aren’t saved on a folder-by-folder basis (you can’t sort a folder by name and another one by date) and the app displays folders at the top. Because of this separation between folders and files in sorting, the sort setting that you choose in the sidebar is applied to both folders and files as two separate lists. This works for me, but I wish I could always open individual folders with specific sorting options that aren’t overridden by the app.

Boxie can move files and folders with drag & drop: tap & hold an item, then swipe up and down to drop it into another location. As you hold and swipe, you can hover over a folder and Boxie will advance into that folder while still keeping the selection active – the system should be familiar if you’re coming from OS X, and while I initially thought that the feature wouldn’t translate well enough to touch, I was happily proven wrong. I think that Tapwings should still add a regular, full-screen modal Move interface for people who don’t like drag & drop, but I haven’t missed it personally. Like many of the app’s other transitions and animations, how the move action works and looks on screen is both informative and nice to look at.

Boxie takes advantage of iOS 7 to detect changes in your Dropbox account in the background and notify you of files that have been changed, added, or removed. 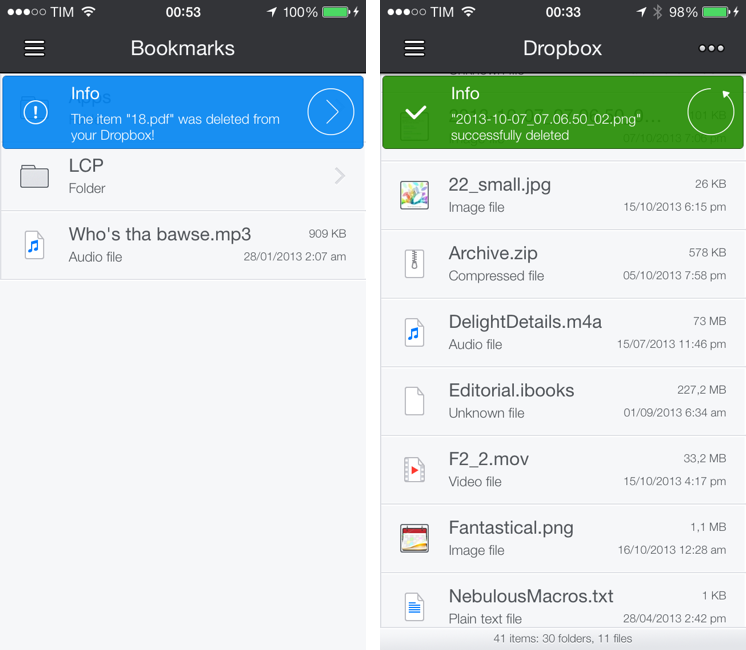 While in the background, as per iOS 7’s own limitations, Boxie can’t fire off a notification as soon as a file has changed: instead, it groups multiple updates in a single notification that is displayed when iOS 7 deems it appropriate. In practice, I noticed that Boxie checked for changes to my account every 10–15 minutes, but I disabled the background notifications because I don’t need to be notified of every change in my Dropbox.

In-app notifications are also supported, and they’re not limited by background execution times. If you leave Boxie open in the foreground and change or add a file on another device, Boxie will display an in-app banner after 15–30 seconds; tap the banner, and you can open the folder where the file is located. The same in-app banner system is used for Undo/Redo confirmation dialogs, which are useful. My favorite way of accessing Boxie updates, however, is through the dedicated Notifications view, which collects all updates from the current day and breaks them down by time. From this screen, you’ll be able to re-open folders as well as restore items that were detected by the app but then subsequently deleted.

Boxie is full of other minor enhancements and shortcuts: you can tap & hold the back button to quickly navigate across folders and sub-folders; you can swipe across a folder to upload photos into it if you don’t want to use the app’s Uploads section; you can view photos in a Gallery view, tap & hold an image to copy it, and even triple-tap with two fingers to choose a background for transparent PNGs. Yes, Boxie also supports GIFs and it lets you cut, copy, and paste files.

Boxie is so feature-rich, I want more from it: there’s no iPad app at this point, and I would love for Tapwings to consider an automatic upload feature for photos that would allow me to completely eschew the official Dropbox app. Right now, the only reason I keep Dropbox on my devices is for the iPad client and automatic background uploads, but, for everything else, I’m doing just fine with Boxie and I enjoy the increased efficiency made possible by the app’s feature set.

A lot of thought went into Boxie, and it warms my heart that such a solid app was created by fellow Italian developers. If you’re a power user or simply interested in accessing Dropbox features that the company still hasn’t brought to the iOS app, I can’t recommend Boxie enough: the app is well designed, fast, and support for deleted files and versions is extremely welcome. Boxie is better than the official Dropbox app in several aspects, and I hope that Tapwings will be able to further enhance it and bring it to the iPad. Boxie is $1.99 on the App Store, and I highly recommend it.