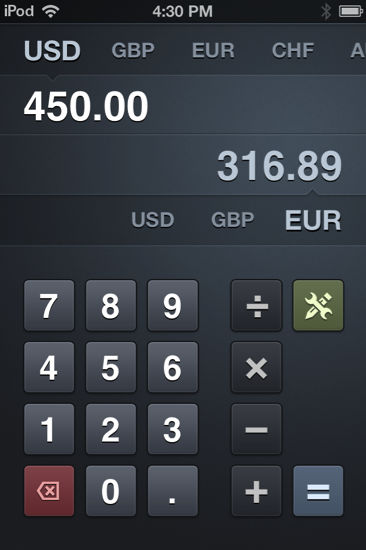 With the US economy in flux, it’s a good idea to keep a close eye on your dollar. As world travelers we find ourselves spending a good dime overseas, and international friendships online can lead to an occasional penny dropped in each other’s PayPal bucket. As foreign currency plays a big role in today’s lifestyles and businesses — boundaries are practically absent — knowing how the USD compares to the Euro or the Australian dollar at the press of the button becomes very useful. Radiant Tap’s Banca for the iPhone isn’t just a calculator, but a currency converter (it supports all of the world’s currencies) that’s both beautiful and incredibly elegant in design.

What impresses me most about Banca is that the one thing it does is pulled off through a simple tap and swipe interface that’s quick to pick up and even quicker to use. Slide the top bar to select the currency you want to convert from (say USD), then the bottom bar to select the currency you want to convert to (probably the Euro). A simple calculator lets you perform simple arithmetic with add, subtract, multiplication, and divide functions. A green settings button above the equal button allows you to customize your list of currencies, and update the exchange rates for the current day through simple taps. 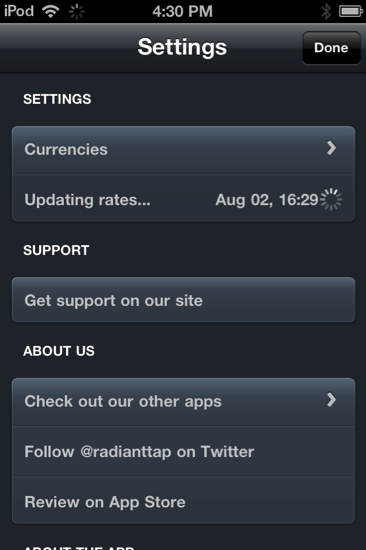 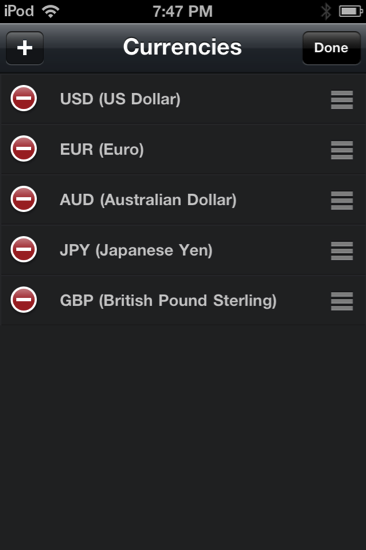 In customizing currencies, you can add and delete as many currencies as you want or need to the slider through an edit menu that allows you to reorder and swap out the Hong Kong Dollar for Pesos. The currency list is so long (as it includes older currencies) that a search bar helps you quickly find currencies you want to add. 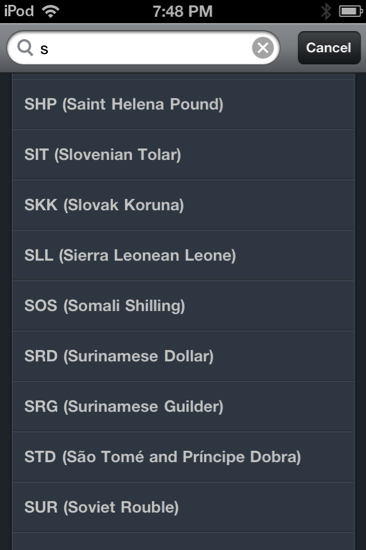 Returning to the calculator, there’s no doubt this is one of the prettiest calculators you’ll see on the iPhone. The color contrasts, button stylings, and faded display for currency conversions add up to an app that’s both professional and visually appealing. The Retina display does wonders in showing off just how crisp the calculator buttons look against the dark background.

The simple calculator functions in that you can’t visually see additions and subtractions as you make them, with errors being removed via the delete button between the one and zero buttons. The problem with the delete button is that it’s sometimes hard to determine whether you’ve wiped out everything — have you deleted what’s on the display, are have you erased what’s in memory? The trick is that if you tap the delete key, you can erase characters one at a time, while holding down the delete key will start you over.

Another cool trick in relation to entering currencies is that by tapping on the upper or lower numbers, you can switch between the currencies you want to enter amounts for. If you’re converting between USD and Euro, and want to enter a Euro amount instead, you can simply tap on the lower number instead of readjusting the sliders.

Banca for the iPhone is smart, fast, customizable, and more importantly drop-dead simple. Currency conversions don’t get easier on the iPhone, and you’ve got until August 8th to get the app at 50% off. You can find Banca for $1.99 in the App Store.