Do you like fantasy-themed games? How about Zach Gage’s work – Flipflop Solitaire, Really Bad Chess, Typeshift, SpellTower, etc.? Would a mobile game brought to life by the art of Adventure Time creator Pendleton Ward be of interest to you? If the answer to any of these questions is yes, then Card of Darkness should be one of the first games you download from Apple Arcade.

If you answered no to all three questions, you should probably play Card of Darkness anyways.

Card of Darkness is a roguelike game where each stage contains a grid of stacked cards, with each stack holding a random mix of monsters to defeat, weapons to equip, and potions and treasure to find. There are also magic spell scrolls that help you more easily navigate what can be a treacherous quest to get from the start of the grid to its end. You don’t have to clear every card stack to complete a level, but you do need to forge an open path to the finish line, and every stack you take even a single card from will need to be finished. As you clear each card stack, more stacks further into the grid will be revealed, slowly reducing the amount of cards that stand between you and the end of the grid. 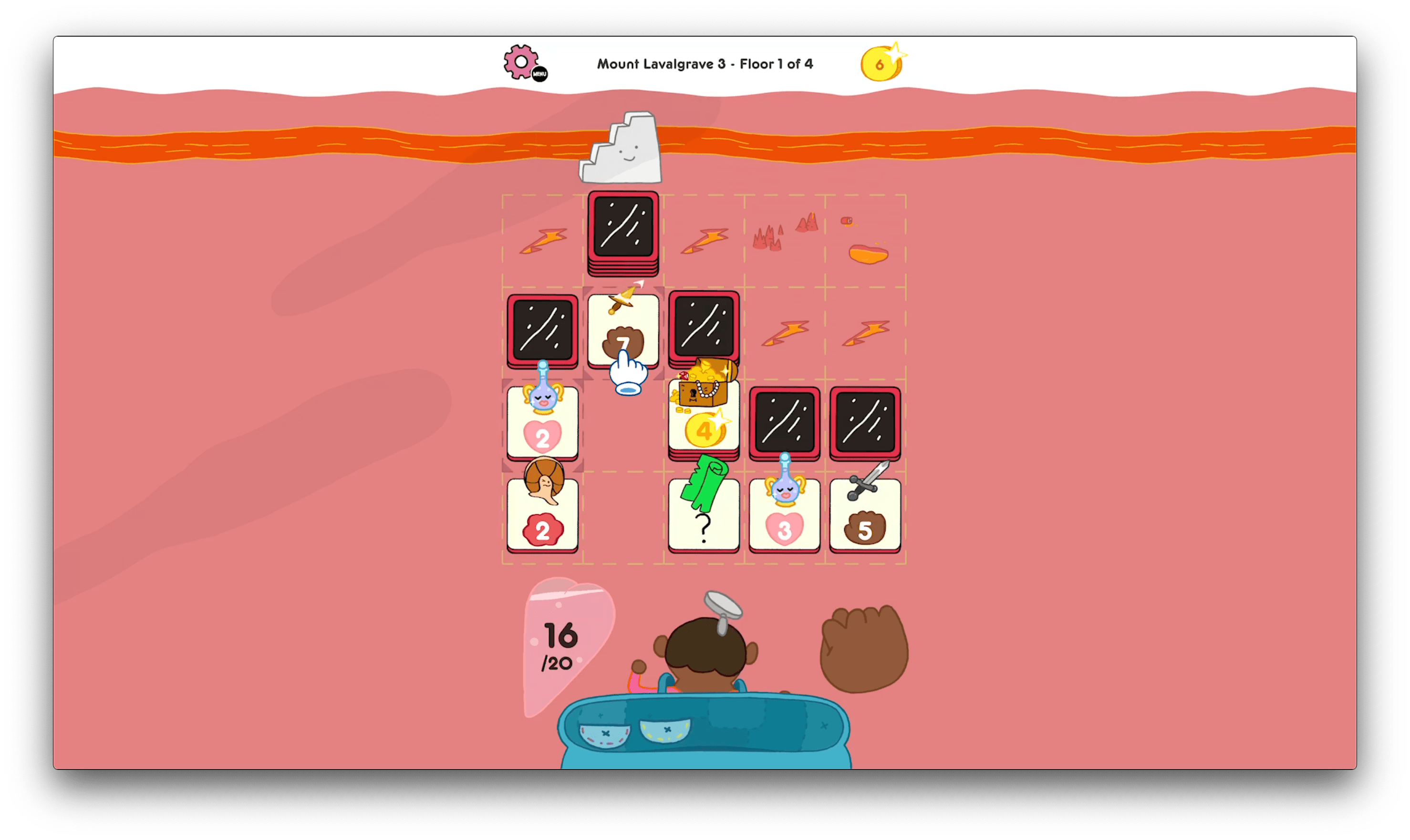 Card of Darkness is also available on the Apple TV and Mac.

Dungeon crawlers aren’t typically the most accessible to non-gamers or casual gamers. But as he’s done more than once before, Zach Gage takes a complex concept and makes it remarkably simple, yet without losing the “gamer-friendly” aspects of the original genre. In Card of Darkness you simply tap one card at a time, at your own pace, to either fight a monster, revive your health with a potion, or pick up one of the other easy-to-understand card types.

There are a few key rules to remember, primarily centered on how the mechanics of battle work, but they’re easy to pick up:

Beyond the basics, the richness and depth of Card of Darkness is found in its wide diversity of cards of each type. There are over 100 different monsters, weapons, potions, spells, and treasures to encounter, most of which have their own unique abilities, such as the Kindlebeasts which catch fire after one turn then harm you every turn thereafter, or the Snowls which stun you any time they inflict damage. Exploring new terrains with unique batches of monsters and weapons, each of which carry their own twists, keeps the game fresh and entertaining. 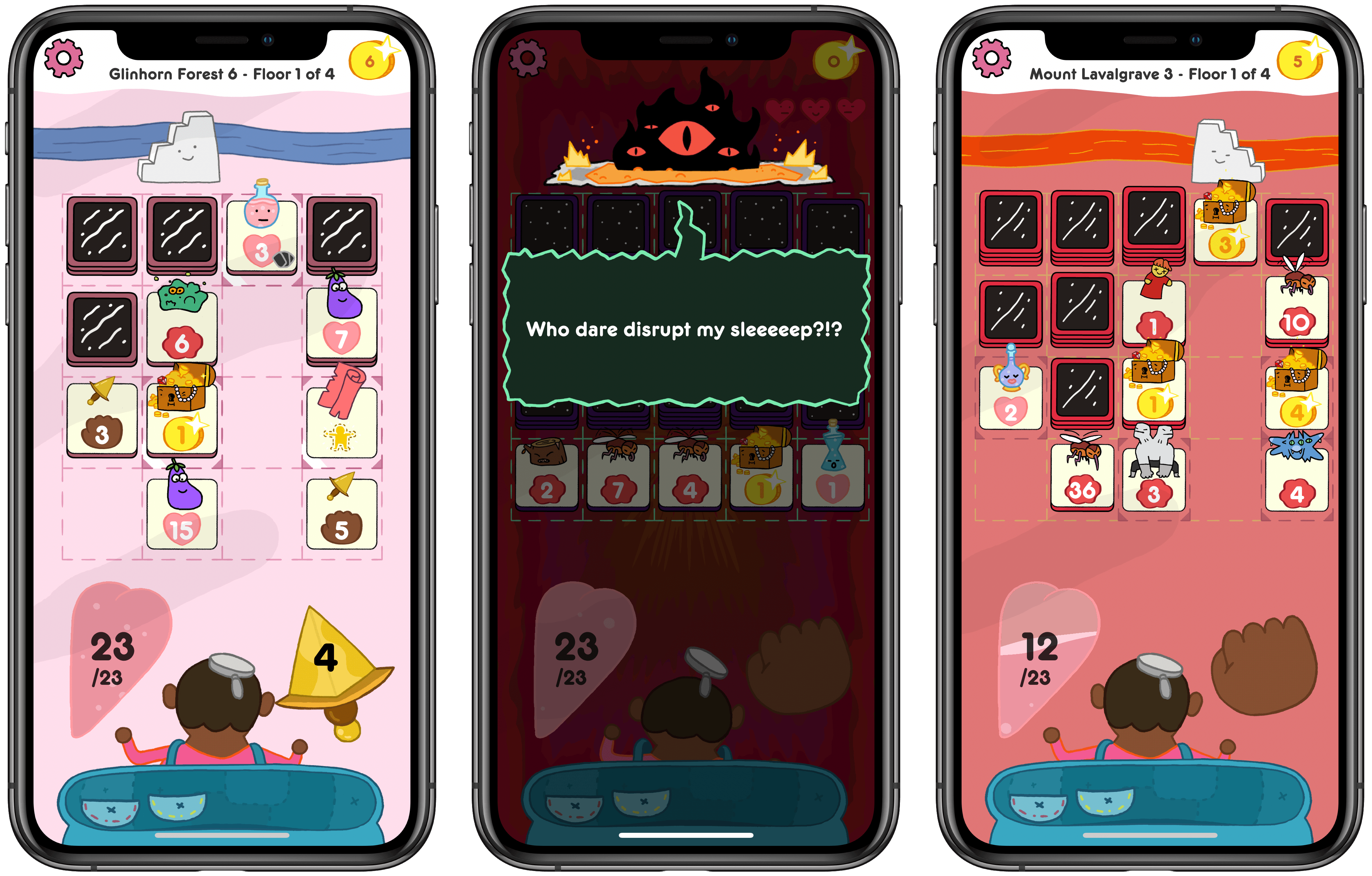 Each stage contains a myriad of different monsters to encounter.

One reason I’ve enjoyed Zach Gage’s games for so long is that they all can be picked up and played for just a minute or two at a time, but you can also easily get lost in them for hours at once. Card of Darkness is no exception – I’ve had some great extended periods of play while hanging out at home on the weekend, but the game has also been a go-to for short bursts on the train, or while waiting in line. Because of its turn-based nature, you can make as much or as little progress per play session as you’d like.

Card of Darkness is a game that may have never existed if it weren’t for Apple Arcade, at least not in its current form. Gage usually does all game design and development on his own, which makes sense given the market he works in; eschewing the cost of a larger development team minimizes the risks associated with premium mobile game sales. However, Card of Darkness is a unique beast, carrying development risks that likely couldn’t have been justified were it not for Arcade. As The Verge’s Andrew Webster put it:

Gage wanted to do something bigger than he was used to. He made a name for himself with twists on existing games like Sage Solitaire and Really Bad Chess, but he also typically developed games solo. His new idea, he thought, would be perfect for a bigger production, with lots of great art to showcase monster designs and spell cards. The problem was that the state of premium-priced games on mobile was becoming increasingly dire, which made investing a lot in the game a risky proposition. Then Apple Arcade came along.

It’s stories like this that especially excite me about Arcade’s future. Gage is one of the best mobile game designers working today, and I’m sure Card of Darkness would still have been a great title as a solo project; however, thanks to guaranteed funding from Apple, he was able to dream bigger and collaborate with artist Pendleton Ward and the team at Choice Provisions.

Paid up front games are increasingly difficult to sell on the App Store, which naturally results in developers taking fewer risks with their titles. Card of Darkness is a great example of how, freed from the burden of keeping development costs as low as possible, developers can create some truly special work.

Card of Darkness is available now as part of Apple Arcade; you can download it on iPhone, iPad, Apple TV, and Mac.