As BGR reported last week, the ZTE Peel 3G case for iPod Touch will indeed be available on Sprint starting November 14th at $29.99 per month with 1GB of included data usage. As you can see in a photo just posted by BGR: 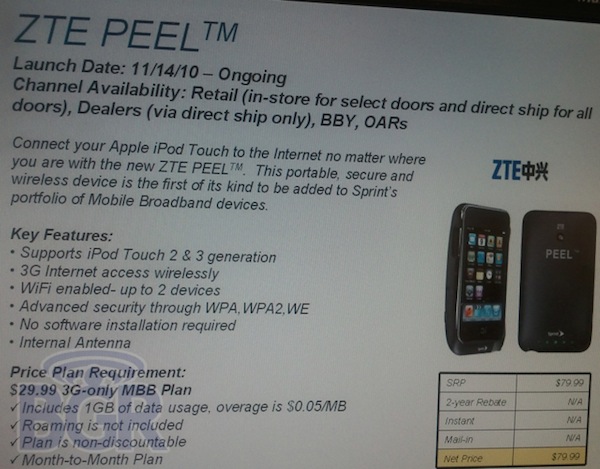 The ZTE Peel will be available in retail stores at $79.99. In case you don’t know what this accessory does, it’s basically a case that comes with a built-in SIM which allows you to turn an iPod Touch into some sort of iPhone with 24/7 mobile internet connectivity. You’ll be able to make calls using services like Fring or Skype from anywhere.

The bad news? It doesn’t support the latest iPod Touch models, the 4th generation ones. The photo clearly shows “supports 2 & 3 generation”, and we can only assume the problem was with the camera on the latest iPod Touch. Or maybe they thought the installed user base of 4th gen iPod Touches was too small to ensure compatibility.

Did they think about the upcoming holiday season, though?