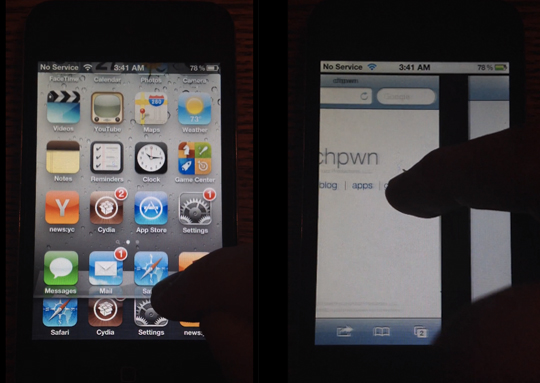 The iPad brought four (or five) finger gestures for multitasking in iOS 5, but due to the screen size, the iPhone didn’t receive the same gestures. Today however, Grant Paul (known more commonly as chpwn) has released a jailbreak tweak that brings gestures to the iPhone for those same multitasking functions.

The tweak, named Zephyr, is available on the Cydia store and is currently made up of two key gestures. The first is based on Max Rudberg’s concept video from earlier this month, and is essentially a single finger swipe up from the bottom of the screen (ie. the Notification Center gesture but from the bottom of the screen, moving up) and it reveals the multitasking tray. The second gesture is swiping in from the sides of the iPhone screen, allowing you to go back to your last opened app and then back again.

Emulating the gesture functions of the iPad and iOS 5, this Zephyr tweak looks and works really well and it’s clear that Paul took the time and effort to perfect how it works. It’s available for jailbroken devices for $2.99 on the Cydia store. Unlike some other, similar tweaks, Zephyr does not require Activator or other jailbreak tweaks to work.

Paul says he is looking to update the tweak with more gestures and actions in the future, including perhaps a gesture to exit to the home screen (as is possible with the iPad on iOS 5). You can view a demonstration of the tweak below the break.