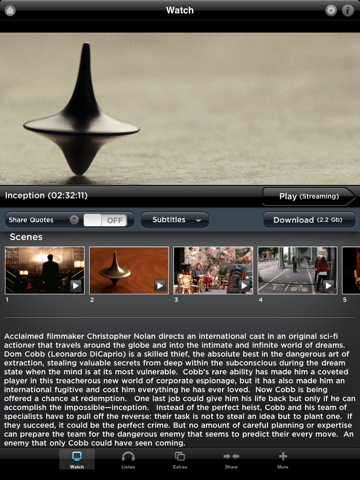 A day after the release of the updated iOS App Store Review Guidelines, it appears that Warner Bros. has already figured out a better way to avoid the iTunes Movie Store’s country limitations and offer content for all mobile devices and users: they are selling movies as apps. The apps, Inception: App Edition and The Dark Night: App Edition, are actually quite interesting as they pack a lot of extras like interactive video trivia, soundboard, ringtones and art galleries, thus seemingly respecting Apple’s new rule on songs, movies and books sold as applications:

These are not “simply a movie”. Warner Bros. has built two apps that offer a native interface for iPhone and iPad, they are available for free in the App Store and allow you to stream a movie or download it for $11.99 and $9.99, respectively. The Inception app, for instance, even comes with movie posters,” behind the scenes” content and music by Hans Zimmer that you can stream via AirPlay. No details on resolution / quality, but it appears that everything can be streamed on 3G as well – perhaps the apps adjust quality automatically basing on your connection’s speed.

This is interesting, as Warner Bros. has cleverly implemented in-app purchases and the features offered by building a native app to bypass Apple’s guidelines and, overall, provide a great experience to customers. We would like to see more of these experiments in the future. [Inception, The Dark Knight via 9to5mac]